Aberbeeg parkrun report #65
We were staying in the area with family for the weekend, and in need of an A for my parkrun alphabet, so decided to give Aberbeeg a try for the first time and were glad we did.  We are used to a much bigger parkrun, and it was a really different experience without hundreds of fellow runners.  It was a beautiful out and back run, supported by friendly and encouraging volunteers.  Starting in the chilly shade of a railway bridge, the course runs alongside the river and through the woods along an old railway line, passing the impressive 'Guardian of the Valleys' memorial on the way.  We enjoyed spotting birds as we made our way back, and found lots of support from fellow runners when my daughter got a stitch and insisted she needed carrying for the last 2km (I talked her out of it).
A total of 50 runners turned out on this cold and sunny day for the 65th parkrun at Aberbeeg.  There were 14 new runners to this course, including the first finisher, Craig Williams, who finished in 16.07.  The first female completed in 24.39 - congratulations on a new PB, Rachel Tovey, one of 9 runners to beat their own previous times.  There were tourists from Manchester and from Fareham (us!), as well as a scattering of club runners from elsewhere in the region.
Having heard today that parkruns will be suspended in the UK for at least the next few weeks, having the chance to experience a new parkrun takes on even more significance.  We plan to keep running as much as we can, and know that the parkrun community will rally around and support each other.  We will miss the social aspects of parkrun, but know that once we are through this crisis, we will relish the opportunity to get out there again, and appreciate both the opportunity to parkrun, and all the brilliant volunteers who make it possible all the more.
Thankyou for welcoming us to your parkrun, and congratulations on being the very top of the list worldwide - a worthy A for my list!
Katie (and Sophie) Reynolds
Tweet

Spending New Year with the family in Talgarth, we decided to check out a local New Year’s Double and were delighted to see the Bryn Bach/Aberbeeg option. I have run at both venues before and they are amongst my favourites.  Our group of 4 was joined by two friends (and Tearaways) from Cheltenham setting off before 7am on NYD. Now that’s commitment!

After joining a large crowd of 481 runners at Bryn Bach for the first leg of the double, we set off for Aberbeeg, relying totally on the sat nav.  We were a little concerned about making the start time of 10.30am as the first run had been delayed but arrived in good time, finding a space to park the car off the main road.  We had chatted on the way about how popular the mid-morning parkrun had become, how Barry Island, Newport and Stratford upon Avon (where we went last year) had been swamped by numbers and how fantastic it was for the core volunteer team at Aberbeeg to take up the challenge.  Unexpectedly, the start at Aberbeeg was very congested , although not all of the Bryn Bach crowd was there as a second parkrun option at Penalta was available. The number of runners at Aberbeeg, however, was still created a record attendance of 364 - an increase of 167 on last year’s NYD total.

The lovely Run Director wished everyone a Happy New Year completing the run brief in a fun, chatty style, welcoming compulsory Australian visitors. Could not hear everything but I’m sure there was a shout out for some of the milestone runners, Craig Blake, Joseph Cowey, David Robinson, Rebecca Smith, Elizabeth Davies, Cerys Smith and  Dave Sansom on their 50th parkruns; and Lucia Jelley on run number 100.

Being full of cold, the first run of the morning had been tough.  I ran under 24 minutes earlier this year at Aberbeeg but any opportunity of getting close to that time in my current physical condition and with the congested start was clearly impossible but NYD is about the double and enjoying the opportunity of running twice.  The walk at the start picked up to a slow jog but then a walk again as the runners breathed in having to pass through a narrow gate at the end of the old station. We were then away again, up a definite but subtle gradient running alongside a stream, looking over terraced Welsh town houses and the hills behind.  A great path and surface for running, this route is along a cycle track which used to be an old railway line. As I found out before, this is a fast route with just one turn and the downward gradient assisting runners on the homeward track as they tire. Going up the track, the first signs of the halfway turn would be the lead runners passing us then onto the cones to make the turn and the lovely downhill path homeward.  My running buddy, Ruth Powell, reminded me to look up at the Miner’s Memorial on the hill (is it called the Guardian?). If you have not been to see it, please do, as it is a fabulous landmark and a fitting memorial to men who died in a coal mine disaster. Max Boyce and his song “Duw it’s Hard” immediately comes to mind.

So after a spurt down the hill to the finish, I felt pretty good!  Six minutes slower than last time here but hey, it’s not always about the time, right?  I got scanned then walked back up the path so I could jog in with my wife. Four members of our group achieved the double, in my case for the 4th consecutive year, so felt good.  I had also escaped my running club’s muddy parkrun double in the Forest of Dean!

Special shout outs for Jon Like, first male home in 16:40 and Lauren Cooper first female in 17:36. Best % age grading were Lauren with 84.09 (SW25-29) and Mark Williams (VM 60-64) with 83.63.  It was Peter Woodward from the Forest of Dean AC’s 426th parkrun.  All fabulous achievements but the real winner was parkrun, Aberbeeg getting 364 runners out on New Year’s Day and all those parkrunners who completed either on or a double run.

Volunteers, you were brilliant and thanks for taking on such a challenge that others would not have contemplated.  Breakfast nearby for some well satisfied parkrunners allayed with a slight concern about the future of the NYD double as our fab hobby inevitably becomes more and more popular. 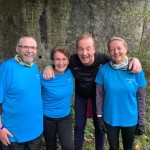 Parkrun day – or Saturday as it’s known in some homes that still manage a lie in.

I did my first ever parkrun on 9th December 2017, graduation from a c25k program run by North Bristol Running Group. Little did I realise that an activity mainly undertaken to support a little weight loss would become such an obsession and while, on occasion, I have been known to say “I don’t like running”, I always say “I love to parkrun”.  So here I am two years on, parkrun 100 and tourist event 79.

I chose to celebrate at Aberbeeg for a couple of reasons. Firstly it is an event I have not completed before and as I work towards 100 different venues that was a big tick.  Secondly I saw the words “flat out and back” in the course description, ideal for a celebratory run… or so I thought. Either the word flat means something different in Welsh to English or I need to go back to the doctor about my inner ear infection!!  To be fair the incline over the first half of the course was gentle and of course what goes up must come down so the second half of the run was a very pleasant descent to the finish. The made up path throughout was also a major plus.

First Timers – 15 in all but a special mention to Sarah Lowe who completed her first ever parkrun   today, may it be the first of many, well done.

Last but not least a massive thank you to the 14 lovely volunteers who made it all happen today. Without you there is no parkrun and it is always appreciated. I hope that you found the cakes when you were finished.

Thank you all for making my day so memorable.. I will be back. 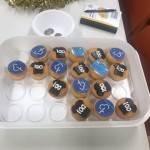 This cold and wet winter’s morning didn’t dampen the spirit of 110 runners who joined in at Aberbeeg parkrun today.

As an Aberbeeg parkrun tourist myself, I excitedly set off early and car-shared with some friends from my run club (Pontyclun Road Runners). I wanted to get to the start line in plenty of time to welcome runners who were joining us for our first instarunnerswales meet-up of 2019.

Before I continue, I should probably explain what instarunnerswales is and shamelessly plug it. We are a friendly social running group based in or around Wales, who enjoy capturing our running with photos on social media, getting together from time to time and share a mutual love for all things running. You can find us on instagram @instarunnerswales and we have a facebook group. 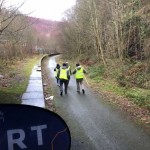 Upon our arrival I was met with a welcoming hug from Hayley Edwards, who had just completed her own run before jumping into her run director role. She had just finished organising the volunteers who were kindly giving up their time to allow us to run. As the runners started to arrive, lots of laughter and chatting was heard. The instarunnerswales meet-up brought approximately 25 runners to Aberbeeg. Some of those had travelled from as far as Aberystwyth and Reading!!! We all had a group photo taken (obvs) before Hayley gave us the run director’s safety briefing. Some announcements included Stacey Knight being unable to volunteer today because her baby girl had arrived 3 weeks early and was 1 day old (I think we can let her off) and John Cunnane’s 50th Parkrun milestone. Shortly after, we were off…. 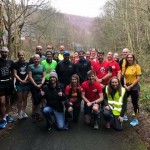 The route at Aberbeeg is a flat ‘out & back’ along the Ebbw valley cycle track on tarmac following the Ebbw Fach river - perfect for runners who are chasing Pbs. The atmosphere along this course is amazing. Runners smiling, chatting, high fiving and supporting each other, some of whom are complete strangers to each other, combined with cheering and high fives from marshalls at the side of the cycle track. I ran with Anthony and Neil at an easy pace and we were able call out to the faster runners as they passed us on their return leg.

On the return part of the course, one of the local runners pointed out the figure of the ‘Guardian’ sculpture in the distance, which is surrounded by a heavily wooded landscape. It was quite majestic. The monument was constructed to commemorate the Six Bells mining disaster in the 1960s and it is obvious that the town is very proud of it’s history.

Once the finish line is in sight the cheering gets louder. You finish under the shelter of what i believe to be an old iron bridge, where the cheering echoes and is amplified. Absolutely fantastic.

Aberbeeg had a course record this week of 15:55 by White Rock runner; Oliver Williams. Speedy! There were 42 first timers and out of 110 runners, 26 had Pbs!!!! Proof that even on a wet day, the course is fast.

After running, everyone is invited to Aberbeeg community centre for tea/coffee and toast for a small donation. It was perfect for our instarunnerswales meet-up, where we could chill and chat for a little while.

For me, Aberbeeg, is one of my favourite parkruns. If you haven’t already been, I recommend you try it. You will be warmly welcomed by the volunteers and other runners, and most importantly, you’ll enjoy the parkrun course.