On a pleasant morning in May it was time for Aberystwyth’s 436th parkrun and my first visit here.

I travelled through most of the early part of Friday by train to be greeted at my hotel withan unexpected glass of Prosecco.  It was then time to explore, locating the parkrun start ready for tomorrow and then walking up and down the coast before finally sitting in the sun with a cold beer and few new pigeon and seagull friends.

Having visited quite a few different parkrun locations I have over the recent years started picking increasing quirky reasons for matching them to particular weekends.  This time as it was Eurovision later in the evening and perhaps the most famous winner of the past being “Waterloo” then yes, believe it or not, it was time to visit Abba-rystwyth!

Even though Aberystwyth is heading towards its 10th birthday it didn’t stop 18 people coming to walk, jog or run the course for the first time.  The majority of those were tourists having their first parkrun here but it also included 1 person brand new to parkrun - a warm welcome to Penelope BAILEY – hopefully the first of many.

Thanks to you all, with a special mention for Clare LANCASTER who reached the volunteering milestone of 25 events.

If you want to help in future weeks it would be greatly appreciated.  Please check our volunteer page for details https://www.parkrun.org.uk/aberystwyth/volunteer/futureroster/.

Today’s Run Director was Hannah DEE who had everything under control by the time that I arrived.  Unlike many parkruns the nature of the course means a minimum of two marshals, one at each end, who both did their roles brilliantly offering lots of support to the 114 of us who were passing by.

Conditions were good today other that a mysterious water feature that had appeared on part of the path needing a little care to cross.  The course was flat but slowed down a little by repeating a number of tight turns on each of the 3 laps, even seeing a slingshot method around a lamp post which was mightily impressive.

First finisher today was Matthew CLARKE in a new personal best time of 19:03, one of thirteen people setting a new fastest time.   First female finisher was Luca RHODES in a time of 22:14 and first junior parkrunner was Leif EVANS.  Finally the highest age grade went to my namesake and sprint finish comrade Damian SIDNELL with an impressive 79%.  This also explains why I seemed to be getting some personalised support whilst I was running despite being 170 miles from home! 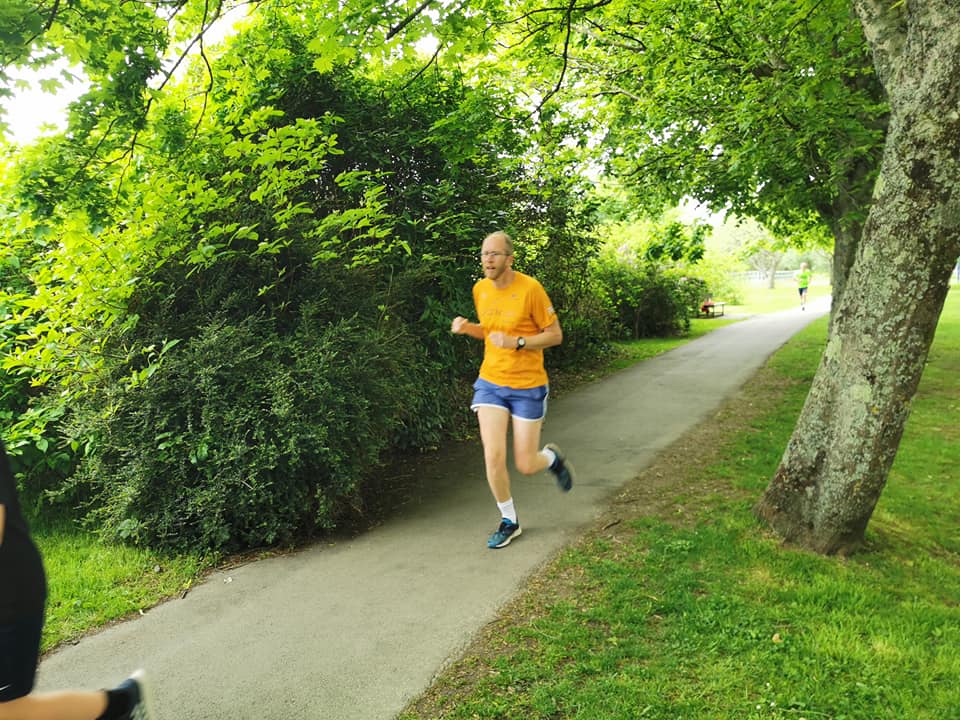 Congratulations to all of the above but also to everyone who came along today and completed the course.  Full results can be found at http://www.parkrun.org.uk/ aberystwyth/results/latestresults/.

Usually when I attend a parkrun and nobody says they have reached an attendance milestone I generally find in the results that there were a few but they were just being shy but on this occasion it was true.  So in this case I’ll pick out Emily TANN and Ruth FLATMAN who both completed their 150th parkrun and I think coincidentally almost together over the line, just 7 seconds apart.   Another mention is for Adam & Carol Diane BULL who completed their 501st parkrun with us, they are two of the now 243 who qualify for the blue 500 T-shirt which we saw first-hand this morning.

Finally having recovered from my endeavours I said my farewells to Aberystwyth parkrun and those I had a chance to chat to throughout what had been a very enjoyable morning before heading off for a coffee and a final walk along the promenade.  Thank-you all for making this another memorable adventure.

Damian BAKER, a tourist from Daventry, signing off.

Saturday 7 May 2022 was a perfect Aberystwyth parkrun day. It was warm and sunny and felt like summer. Aberystwyth was stunning.  Spotted a few fellow park runners doing their pre-parkrun warm up along Aberystwyth promenade which was quiet and serene.  Course conditions along Plasgrug Avenue were good, though, as we were pre-warned, a little bit slippery rounding the corners.  116 people ran, jogged and walked the course, of whom 10 were first timers and 10 recorded new Personal Bests. Representatives of 16 different clubs took part.  There were a lot of parkrun tourists and one from as far afield as Seattle!

The support from the volunteers and other spectators was very encouraging and the post parkrun café experience at the Express was a success.

Today's full results and a complete event history can be found on the Aberystwyth parkrun Results Page  ( https://www.parkrun.org.uk/aberystwyth/results/latestresults/ ).

This week 97 people ran, jogged and walked the course, of whom 14 were first timers and 16 recorded new Personal Bests. Representatives of 11 different clubs took part.

It was a gloriously sunny morning, and felt more like Summer than March.

We had an engagement party join us, with the first finisher, who didn't have her barcode! Well done, unknown woman who finished in 18:15!

After the run people sat on the grass, chatting.

People milling around after the event 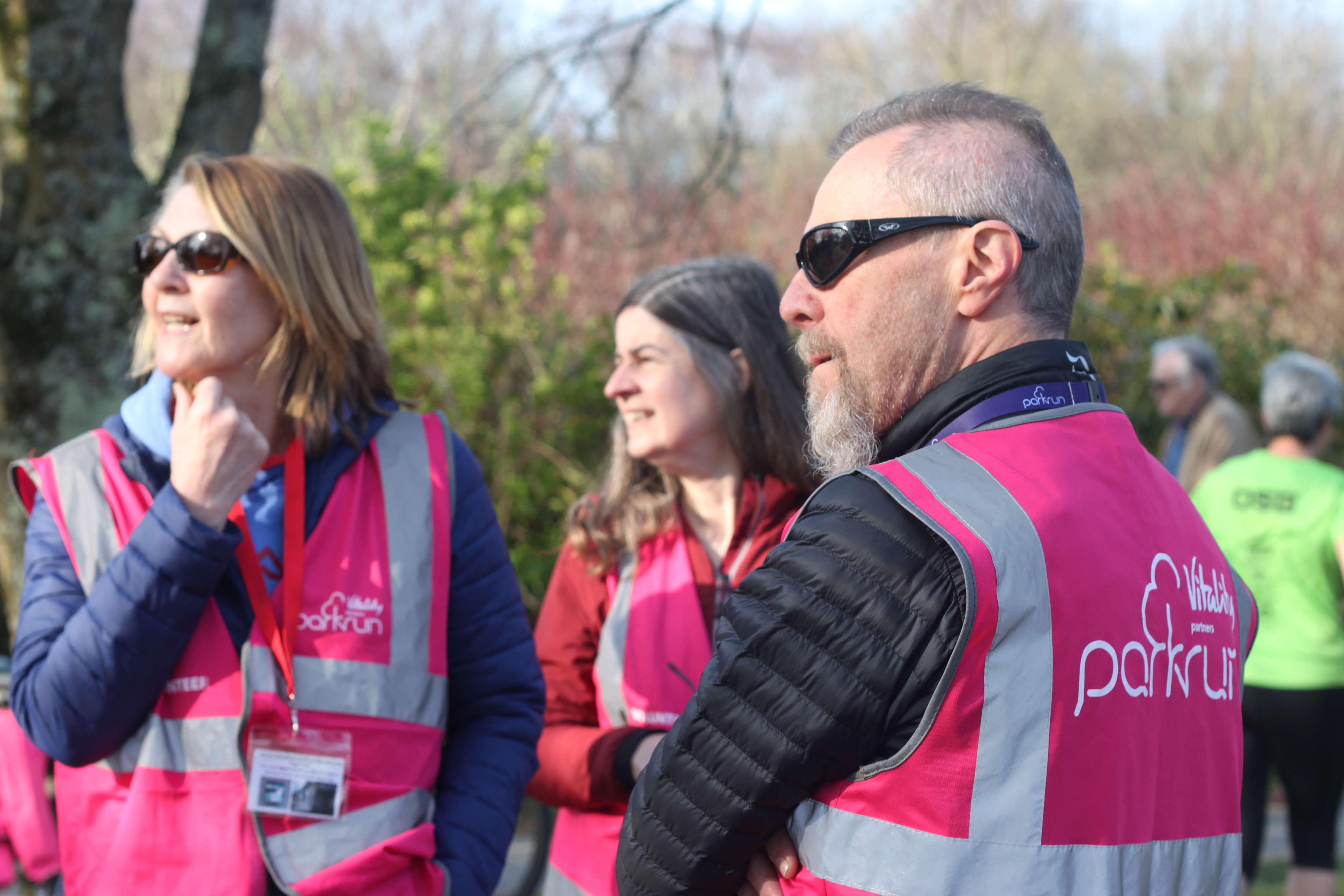 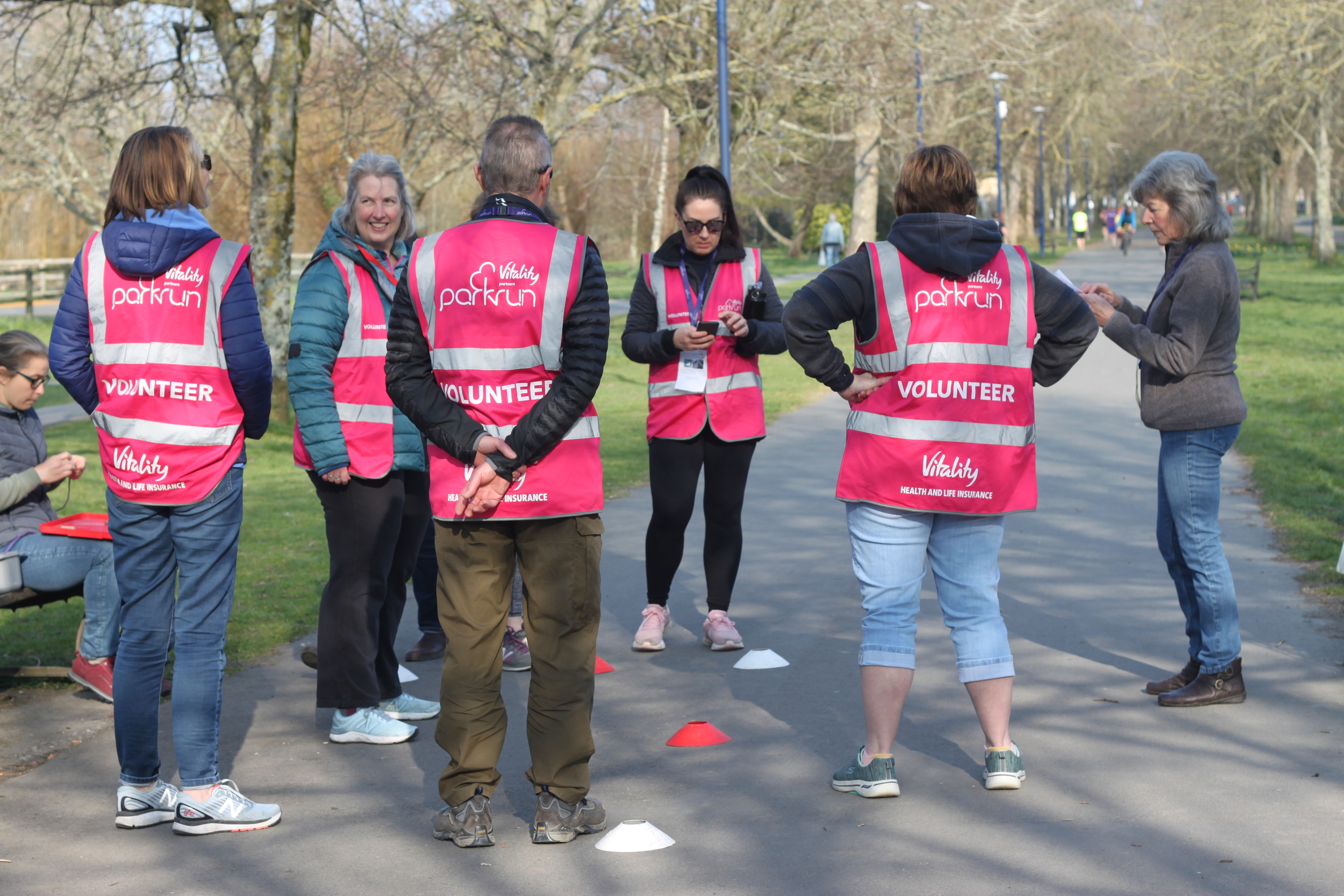 Crocuses or is it croci? Purple, white and green seemed appropriate for International Women's Day anyway.

This week 89 people ran, jogged and walked the course, of whom 10 were first timers and 10 recorded new Personal Bests. Representatives of 9 different clubs took part.

For International Women's Day we had an all-women volunteer team including some pacers running at beginner-friendly times (35 minutes, 40 minutes, and a jog-walk "we'll get around" pacing) to try and encourage women to join in and have a go.  Four people completed their first ever parkrun with us this morning and all of these were women, so maybe that worked. We also had 6 tourists at the event.

This week 105 people ran, jogged and walked the course, of whom 16 were first timers and 14 recorded new Personal Bests. Representatives of 10 different clubs took part.

Thanks are also due to Ian Brandreth who has spent many evenings this week running defib & CPR familiarisation sessions with groups of Aber Parkrun volunteers (and others). We are very grateful for the time, thought and expertise that Ian has put into these sessions, and also to all the volunteers who showed up to learn.