Hi to everyone at Alice Holt parkrun - the hilliest and friendliest parkrun I’ve done so far!  Actually I always come away from EVERY parkrun thinking “what a friendly bunch!”, however comradery going up that hill was strong and much appreciated!  That hill by the way, it might get a few mentions in this report!  And apologies now that your report is coming slightly late this week….

I must say I feel extremely lucky to have finally completed Alice Holt parkrun at all this week!  It’s been on my list for a while; my New Year’s resolutions are to continue “Alphabeteering” and volunteering – and I haven’t had an “A” so it seemed like a good one to do in January!  My parkrun mad cousin in the Midlands knows of Alice Holt and loves a good forest run, so you guys are known far and wide!  2 weeks ago I was rostered to do the run report and came down with a horrible 24 hour sickness bug & sent apologies to the volunteer crew at about 4am on the Saturday morning.  I was also gutted that I wasn’t going to make 6 PR’s in Jan since doing the double on NYD.  Nevermind, I begged the volunteer crew to have me back this week.  I sent photo’s of Gruffalo’s and forest trails on the family FB group – “I’m finally going to Alice Holt”.  Not only that, I’d finally managed to convince my ‘non-outdoorsy’ best mate to print her bar codes and join me for her first parkrun – ‘she’s going to love it like me’ I thought, and headed off from Surbiton to Godalming at 7.15am to pick her up.  Traffic on the A3 and a best mate in bed 10 mins after the allotted pickup time, I was stressed but determined not to miss the first timers briefing, so I left her in her pit and sped off following the Sat Nav from Godalming to Alice Holt.  2 wrong directions and the Sat Nav ADDING minute to my ETA at every turn, I was SO pleased to find a massive car park with plenty of spaces AND fully working barriers (that I had been warned about) and even managed to have time to use the excellent facilities before jogging over to find my fellow first timers – of which there were many!! 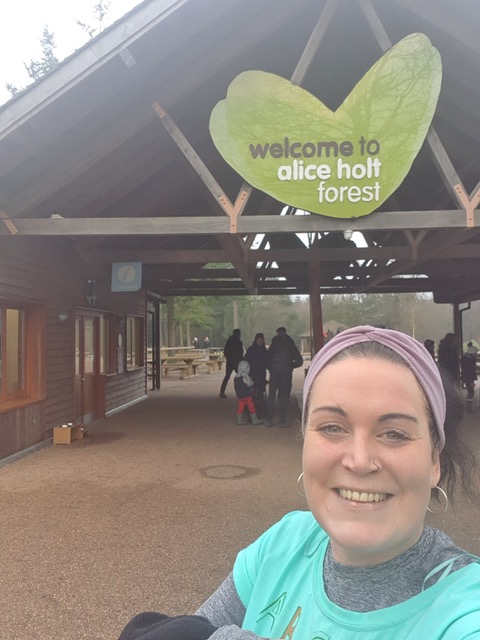 As my heart rate settled down a bit from my journey, it started to pick up a bit with all the warnings of “this is a very big forest” and the importance of keeping children on a leash and dogs within arms length – or something like that, I was trying to concentrate on which way I needed to go at the cross roads each of the 3 times I was going to cross them.  I did not want to get lost!  I needn’t have worried though, as I’m usually a 33 minute runner so I had people around me at all times and wonderful volunteers at well thought out places – and a massive THANK YOU  to all those well positioned volunteers – you didn’t forget the individual battle that each and every one of us had with that hill and cheered us ALL on and congratulated us accordingly.  It was really noticed that you weren’t just pointing directions but encouraging as well.  I did also manage to record Stephen’s briefing although seem to have missed the names of the 50’s this week – I know Carmen McTernan did her 150 this week – AMAZING – well done!  How many of those are at Alice Holt I’d like to know!?  Seriously you regulars must have thighs of steel, I’m struggling to walk down the stairs today and I’ve done a bit of hill running recently!!!  Stephen I loved your briefing by the way, have just listened to the recording again on my phone – no beating around the bush: “Go on then, lets start the race….Run!”

I have to give a special mention to a few people that really helped me out.  Gus chatted to me briefly going up the hill the first time (as he passed by!).  “Do we have to do this more than once?” I asked, trying to remember the warnings from the briefing about how Dragon Hill ‘drag’s on and on’… “No just the once he replied”, then a few seconds later called over his shoulder “actually no, sorry, we do it again”.  I think I decided at that point that if I could do it once running, that would be my achievement for the day and I might have to walk it the second time, which I did with a few other’s, breathlessly saying a few words to each other (“big”, “steep”, “nearly there” kind of things).  Second mention goes to Ave and her dog Archie who recognised that I was having some sort of asthma attack (not on the hill!) and made me lean over and breathe correctly.  This hasn’t happened since I was about 12, so it came as a bit of a shock and was pretty terrifying.  Great words of advice from Ave “you can walk it to the end, you’re not going to win now”!  I took this advice on board and mainly walked and jogged a bit.  Third mention goes to Tim – he had finished in around 23 mins and had taken himself to the bottom of the final hill to give encouragement to his fellow runners – such a nice gesture!  When the asthma thing started happening again, I walked back to Tim pointing at my chest and trying to do some sort of thumbs up / down code that I was in difficulty.  Again luckily he recognised the horrible breathing sound as being asthma and explained the importance of staying calm while it passed!  Tim kindly walked me up the hill and I did a little jog to the finish and more encouragement and clapping from the team at the funnel.  That HILL!!!! 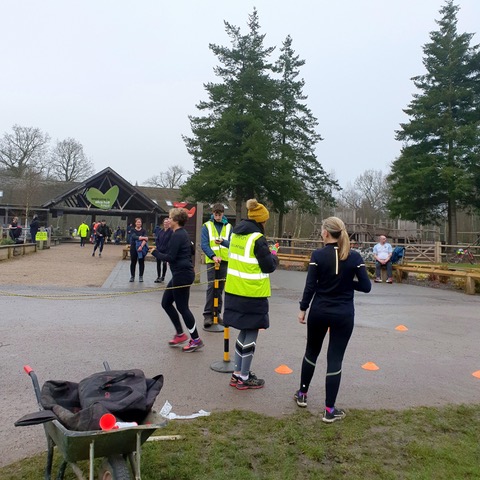 I got my bar code scanned and noticed the very efficient token sorting set up in the pergola.  Like a well oiled machine, the volunteers at Alice Holt have really perfected their roles! 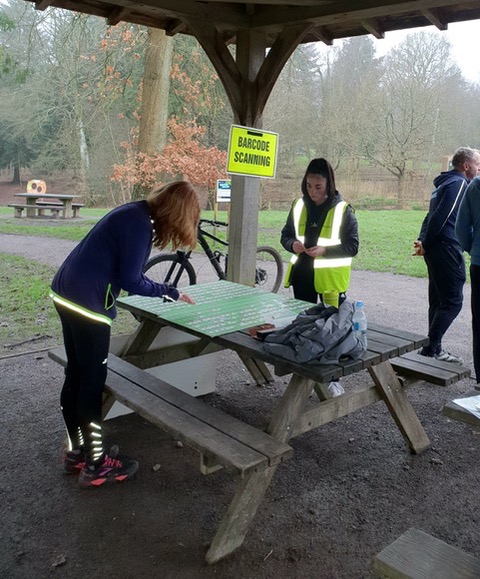 I bumped into Gus and his wife Marike from Dulwich parkrun who kindly listened to me offload about my experience and gave me some good suggestions for flatter runs to continue with my Alphabet. I forgot to ask you guys if you did any parkrunning on your South African holiday!?  I’ll hopefully bump into you at Dulwich or Peckham Rye soon!  I looked for Ave to thank her but couldn’t find her – although did bump into her later among the Gruffalo’s and took on some more advice about inhalers and breathing.  Thank you again.  Also want to wish Douglas all the best for his half marathon today.  Douglas was the first person in a yellow high viz that I found on arrival and gave me some great tips about other local runs.  Thanks for doing the tokens this week, I was so happy to see you at the end of the funnel!

Stephen told me that there were 390 of us in total and thought that about 40 of us were newby’s – I hope you all enjoyed being at Alice Holt as much as I did – despite my difficulties, the scenery is just stunning and the fact that we run past various Gruffalo characters is just the icing on the cake for me!  I went back for a final lap of the Gruffalo trail with my friend on speaker phone telling me the story and what to say to the characters to prevent them from eating me.  Anyone that doesn’t know the story I would recommend reading so you know what to say to them in your head the next time you go past!  I will definitely be back, with my mate in tow! 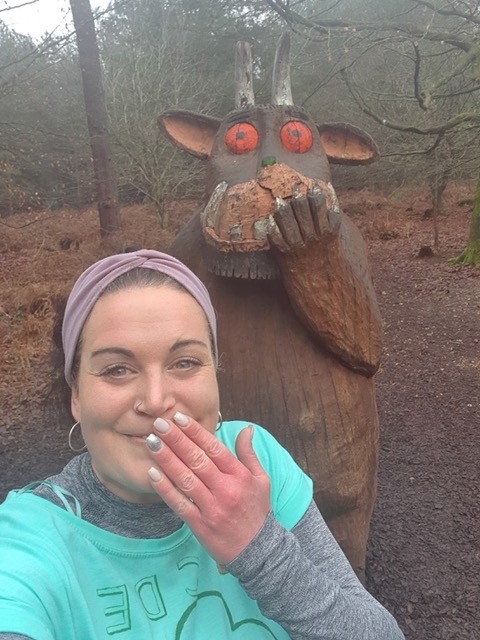 Today's full results and a complete event history can be found on the Alice Holt parkrun Results Page.