Firstly – a thank you and a confession. A huge thank you to Rachel ADAMS for providing the core information for this report; owing to a diary mix-up I wasn’t actually there/here this week. However, I have it on good authority that ‘it was a glorious run through the forest today - conditions were very good’. Which is a relief after the recent rain (again!) and apparently more due soon….

It’s exciting – and I’m sure gratifying - for our tireless ‘Core Team’ who make sure that Alice Holt parkrun runs, week after week, with the help of scores of lovely marshals and other volunteers – to see that the jump up to more than 400 runners, joggers, walkers (and their buggies and dogs) has been sustained following the crazy 756 of us on New Year’s Day.

Of our 411 runners this week – we had four people with milestones. Congratulations, respect and awe to Helen WALTERS who clocked up her 100 (or maybe it was 101?) – and all of that squared (or at least multiplied by 2.5) for the trio who joined the 250 Club (sounds quite simple when you just type it!) Helen CARPENTER, Vicky HAMBLIN and John WHITEHALL. Amazing stuff!

It was lovely that John and Vicky, both Chineham Park runners, chose Alice Holt for their big 2-5-0 – and that they brought lots of supporters from the club with them too. They crossed the line together in 38 minutes 21 seconds, and in fact five of the club’s 13-strong contingent joined them in a triumphant finish separated by just four seconds.

When someone has clocked up such a milestone it’s interesting to take a little look at their run history – not so much for their times (after all who know if they were pushing a buggy, encouraging a friend or perhaps nursing a hangover (perish the thought!)) - but to see where they have put in the miles. And how different were all of our milestone achievers this week. John is a Basingstoke regular – his first and only other time at Alice Holt was more than 18 months ago. As for Vicky – we’ve been privileged to see her five times – we share that honour with Newbury. Other than Basingstoke (63 runs), she’s been to no other single parkrun more than five times. Vicky has parkrun all over the place – 166 different places to be precise – that takes some planning! Helen CARPENTER, who ran her 250th in 35:41, crossed the line with family Steve, Isla and Phoebe (who also clocked a PB giving them another reason to celebrate!).   Helen is a Bushey Park regular (234), but has toured a little. This was her eighth visit to Alice Holt. Helen WALTERS (27:48) is an Alice Holt regular (96 runs here).

We salute you all – as we do absolutely everyone who turns up and gets going – whether that’s crossing the start and finish lines, setting out the course, marshalling the route, timekeeping or administering the funnel and finishing process – or bar code scanning, token sorting and packing the whole lot down again.

And whilst were on saluting….Matt SAKER was first male home and Helen RUTT first female (19:10 and 23:00 respectively) and just in case you were wondering – four of our 411 runners this week were called Helen!

Dylan CLARKE is definitely one to watch. He was the first junior male home (he is in the 11-14 category), in seventh place overall with a PB today of 20.32!Amelie FREWER was the first junior woman across the line (also in the 11-14 category) with time of 26:26. We should also keep an eye on Tommy RIPAMONTI in the boys 10 year old category. Tommy has only been parkrunning since the beginning of the year – but he’s been here every week and has three PB times from five runs, including an impressive 7:41 today! 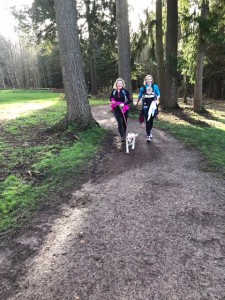 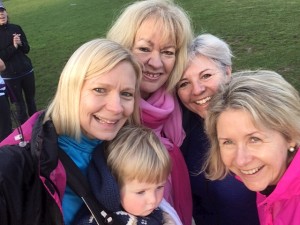 But, as I mentioned above, it’s not all about the running, jogging or walking. Volunteering is an equally important way to take part in parkrun. And increasingly, parkrun participation in the widest sense is something you might hear doctors recommending (prescribing, almost), for people with a wider range of conditions – from high blood pressure and potential diabetes to low mood or self-esteem.

BENTLEY VILLAGE SURGERY is the latest local practice to ‘sign up’ as a ‘parkrun Practice’. Some of its staff were out on the course today and together with colleagues from THE WILSON PRACTICE in Alton – and Hogmoor-affiliated CHAWTON PARK SURGERY (also Alton) and BOUNDARIES SURGERY in Four Marks they hope to field a volunteer crew sometime in the spring, It’s great to see the value of exercise for physical and mental health and well-being being supported so directly by the NHS through this simple link-up. ‘Free at the point of use’ was the proud (and enduring) claim when the NHS was created in 1948; ‘free for everyone, forever’ is the parkrun mantra, so maybe it’s not so surprising that we should find common ground with our local surgeries.

Well done to everyone who took part or volunteered at Alice Holt today. If you are interested in volunteering, simply check out the website or make yourself known to the Volunteer Co-ordinator or Run Director next time you are at Alice Holt.