If you were on the start line for our Anniversary event on 7th December you will have heard the news that after eight years Catherine is stepping away from being our Event Director. We will have more about this in our run report but in the meantime here is the poem that Jan Smith wrote in Catherine’s honour. So if you weren’t there or missed out on all the words then here you go ... 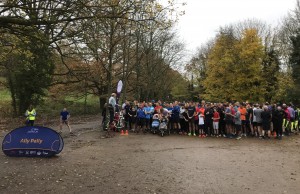 Rather neatly our 400th event turned to be the final event of our 8th year due to the following week’s cancellation. Look out for a few anniversary related facts and figures in due course, but in the meantime and with apologies for the delay, here is a brief look back at Ally Pally parkrun 400.

Conditions were still tricky in places on the top path, but elsewhere it was all pretty good and again we had a cool, but dry morning. No real matters of import need reporting, although there was a cheer when a cycling parkrunner was reunited with the key to his bicycle lock! Matched by the cheer for a very small parkrunner crossing the line after most others had left.

We had 301 finishers with 11 beginners and 22 first time visitors joining us. Well done to the 58 who achieved a PB. Our thanks go, as ever, to all those who donned the yellow waistcoats and made it all possible.

All the details can be found here.

Join us on December 7th when we start our fifth century of events and celebrate the 8th anniversary of the founding of Ally Pally parkrun. Be sure to arrive early for the pre-event speeches and presentations, and stay on afterwards for the cake and conversation.
(Tim) 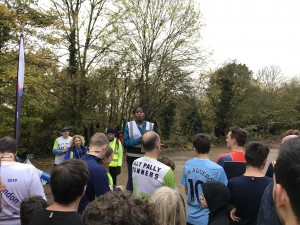 After another wet week it was not so much a case of tiptoeing through the tulips but through the mud under grey but dry skies. On the whole everyone was terribly British and formed an orderly queue at the new single file section on the upper path. This has come to replace the bridge for those of us back in the pack. No doubt up at the pointy end they don’t have such issues. A polite “sorry” was heard on the second lap as one of the leaders hurtled past with a certain amount of splashing. Despite the inevitable hold ups this all causes we somehow managed to record 43 PBs amongst our 312 finishers.

As well as thanking all our volunteers for making it all possible we must note those who stopped to assist an injured parkrunner, and those who looked after her at the finish area. Fortunately the runner was able to leave under her own steam after the event.

We had a few finish tokens returned at the start, thanks to those who brought them back. Please do remember to return them once you have been scanned

We had 6 new parkrunners and 21 first time visitors join us. Hope you enjoyed it and that we will see you again soon. It’s always nice to see mentions and pictures on social media.

All the details can be found here:https://www.parkrun.org.uk/allypally/results/weeklyresults/?runSeqNumber=399

A reminder that we have our 8th anniversary event on December 7th when we hope to see as many of you as possible as this will be a very special event, apart from the cakes and pacers. No need to run, just be there! https://www.parkrun.org.uk/allypally/news/2019/11/18/8th-anniversary-event-7th-december-2019/

In the meantime we have event number 400 to look forward to, followed by a week off to get ready for the party!

After a week off and in the absence of any international sporting events we were guaranteed a good turnout for Ally Pally parkrun 398. Those who opted to watch the rugby the previous week rather than opting for a spot of tourism possibly made the right decision, despite the result from Japan. Those of us who popped over to Pymmes, or any other local event, enjoyed (?) some testing conditions. It’s never a good sign if you can wring your shirt out at the end of a parkrun!

The weather last week was a lot kinder, although rather cool, and an autumnal mist greeted the 341 parkrunners. Fortunately the absence of any strong wind reduced the chill and conditions were not too bad, although there were safety warnings for parts of the course that had suffered before, during, and after, the fireworks. Hopefully things will improve over the next few weeks but all the recent rain won’t have helped, so do continue to take care and be considerate to other parkrunners on the narrower and squidgier sections.

We had a bit of a volunteer crisis ahead of the event so everyone was very grateful to those who stepped up to make sure that things could go ahead. Thanks also to those who handed in various bits of lost property, at least some of which was reunited with the owners.

Out of the 341 finishers there were an impressive 21 beginners (definitely an improvement on the previous event’s 2) and we had 34 first time visitors. 49 PBs were recorded despite the occasional slippery patch.

All the details can be found here.

And finally - if you drive to Ally Pally you may be interested in the proposals to charge for parking in the park or at the Palace. Details here.

If you follow us on Facebook you will be aware that we have taken to posting run reports there. We will still post those but it seemed a good idea to put a version here as well. It is not compulsory to read both!
---
Take a combination of half term, a major sporting event, and some dodgy sounding weather forecasts and it is hardly surprising that there was an impact on the turnout last week. We should perhaps be grateful that this coming Saturday sees us having the day off. Fingers crossed that both the rugby and the fireworks go with a bang. One benefit of a smaller turnout is that those who are there get rewarded with higher finishing places for the same time.

As you may be aware there was a delay in getting some of the results processed. This was due to those results scanned using the parkrun volunteer app not making it across at the first attempt. Fortunately everything was safely stored and was retrieved later. Thank you to all concerned in sorting it out and apologies to those who had to wait for their times.

Once the dust had settled we had a total of 231 parkrunners. We had just 2 beginners, along with 16 first time visitors. Presumably a desire to get home to catch the second half was behind some of the 36 PBs.

Our usual thanks go out to all the volunteers, and especially Run Director Andrew for dealing with the results processing.

Congratulations to Sonia Maynadier on reaching the 100 parkruns milestone.

All the details can be found here: https://www.parkrun.org.uk/allypally/results/weeklyresults/?runSeqNumber=397

If you follow that link and haven’t looked at the results since last weekend you will find that it has all changed. It should work a lot better on a phone and all of the information is still there. The search box is your friend, as are the three dots next to the search box. Have fun!

If you are doing some tourism, putting your feet up in front of the rugby, or just having a lie-in, enjoy the week off from Ally Pally and we will see you on the 9th.

There has been a delay in processing around 1/3 of the results from this morning's Ally Pally parkrun as some of the barcode data has temporarily drifted beyond our grasp.

Once we get hold of it we'll add the missing results to the ones we've already processed.

Apologies if you've been affected and we'll resolve this issue as soon as we can.

As 254 parkrunners and 17 volunteers arrived it was clear to see that they were well prepared for the rainy and damp conditions (layered clothing, umbrellas e.t.c.). Things soon changed, as sun rays soon appeared over the start lin. The smiles of those present grew bigger and there was a real sense that the positive atmosphere caused the clouds to disappear and the sun to break through.

A special thanks goes to the following volunteers for which without their support the event would not have happened:

Become a volunteer at least three times a year. If you are worried about the tasks, don't be as they are all very simple and you will receive a briefing on the day. Please also encourage your friends and family to get involved. Anyone interested should get in touch with us at allypallyhelpers@parkrun.com. We also have a signup sheet on our event days. We would love to hear from you!

After our enforced absence last week, we had a fine and warm morning for our return to Ally Pally, where we enjoyed comparing our touring experiences.

It was a day of celebrations.

The Sheldons were out in force to reach the marvellous achievement of their 1000th  family parkrun. Matthew, Bethan, David, Rosie and Andrew celebrated by coming over the line together, and by treating the rest of us to cake. The 1000 does not even include the numerous times they have been there to volunteer as everything from Run Director to Run Starter, nor the many runs that David did being bumped up and down in his buggy. Here's to the next thousand.

Congratulations also to Bethan Sheldon on reaching her own 200th, and to Terry McCarthy also achieving his 200 milestone.

Chloe, Katerina and Theo Macaulay represented Evelina Childrens Hospital in their "parkrun takeover" to celebrate the 150th birthday of this venerable NHS institution which treats 95,000 children per year.

Unfortunately, the name of the first person to cross the line currently remains Unknown, although his female J10 alter-ego made a brief and transient appearance in the results, with a spectacular age grade record, subsequently removed!

Second and third home were Jamie Wood and David Dugdale.

Many thanks to all the volunteers who made it possible.

My friend and I have been doing some Parkrun tourism lately.

Mostly this consists of searching around for a Parkrun as near by as possible so I don’t have to rise from the pillowy bliss of bed until the last possible second. However, last week there was also an added wrinkle:

“Can we do a non-hilly run please? I just can’t handle doing hills this time”

“Sure, well that’s Hampstead Heath out. What about this one?”

As those who regularly face the Alexandra Palace Parkrun will know, “flat” is not the word you’d use to describe it. Unless you were saying “I nearly fell flat on my face on that last giant hill”.

Ally Pall features a number of short, sharp uphill darts that I was completely unprepared for. That, combined with the heat, meant the run was never going to be my fastest 5K.

At last week’s run the sky tried to drown me, and this week it tried to melt me. Sometimes I wonder if I upset Mother Nature by dropping a Dr Pepper can or something and she’s slowly taking revenge by sabotaging my running career (or maybe I just need to stop coming up with excuses).

Still, some people did manage to squeeze out an improved time. Matthew Field, Rondo Selwyn, Lloyd Williams, and Tom Holland (calm down, not that one) all got PBs.

In fact, of the 404 runners who ran, walked, and jogged the course on Saturday, 32 set personal bests.

My friend and I weren’t the only first timers there either.

Meanwhile on the other end of the spectrum, Julie Wallis completed her 50th Parkrun, Dominic Pride and Ana-Maria Norbury did their 100th, and Alun Nash racked up a staggering 429th.

Thanks to all the volunteers who showed up despite the conditions and to everyone who contributes to parkrun in ways large and small.