Without volunteers, our weekly parkrun ritual just wouldn’t happen and it’s often the same faces every week who give up their own run. This week, all of the Ashton Court parkrun volunteer spots were filled by members of Southville Running Club (assisted by students working towards their Duke of Edinburgh Awards). We also had five SRC pacers to help runners of different abilities try to reach a new PB. And it must have worked because 88 parkrunners racked up a new PB this week. Bravo. 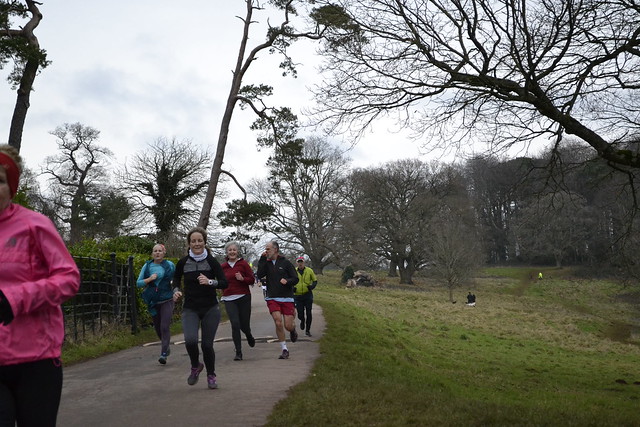 On the left is Lynn Chadeesingh, running her 94th parkrun, and just ahead, in black, is Sue Jones, running her 10th. In the red shorts is Southville Running Club member Eric Booth, running his 92nd parkrun, and in the middle, in the maroon top, is Julia Townend, about to finish in under 34 minutes for the first time, in her 13th parkrun. Unlucky for some perhaps, but not for Julia (photo: Mark Small)

For example, Julia Townend has run here 11 times since June, and last achieved a pb 9 runs ago. Today she broke through the 34 minute barrier for the first time with her time of 33:51. So too did Steven Stone, who finished in 33:24, his first pb for 8 events and 62 seconds faster than before. 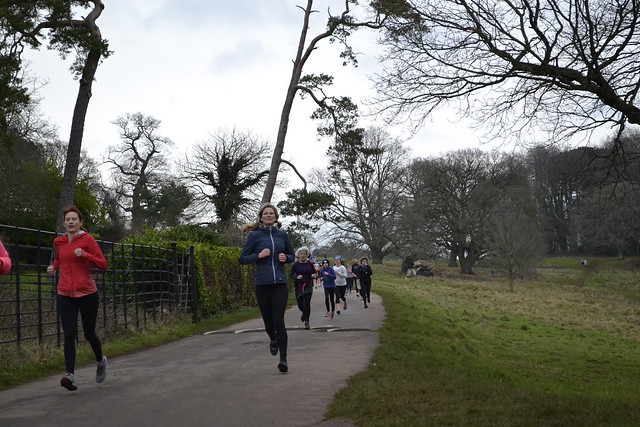 In red is Danielle Worgan, about to run 1 minute and 1 second faster than she did the first time she ran with us, last October. Alongside is Victoria Knowles, set to finish almost 3½ minutes faster than before (photo: Mark Small) 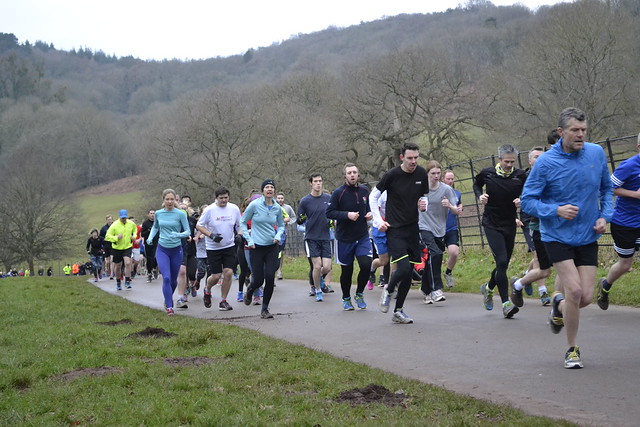 Towards the right, in the light grey t-shirt, is Oliver Feighan, all set to run up and down the hill faster than ever before (photo: Mark Small) 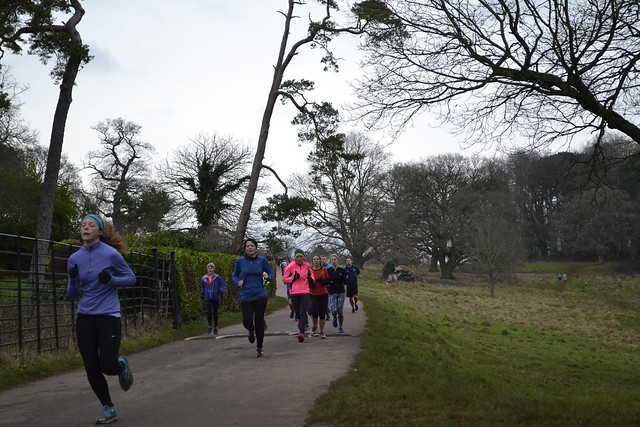 Joanne Ashton is in lilac, seen here running hard but about to miss a pb by 2 seconds (photo: Mark Small)

Congratulations to everyone who achieved a pb today - I haven't been able to mention you all. I don't know how many of you were dragged round to your new fast times by our pacers, but hopefully some were. And spare a thought for Joanne Ashton, Gordon Breen and Jon Woodward, who all finished 1 second behind their pb. 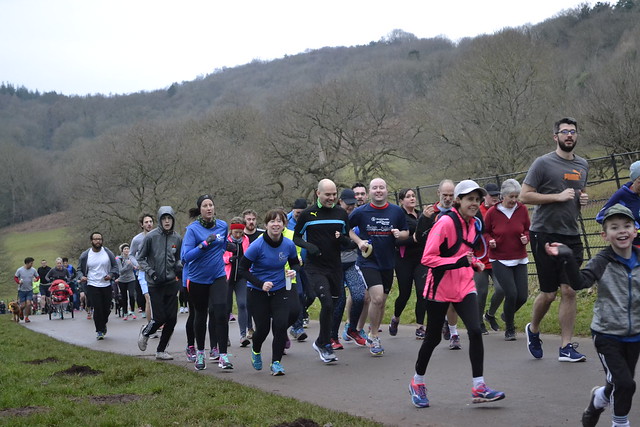 Smiling on the way up the hill? Whatever's wrong with everyone? (photo: Mark Small)

I was at the first marshall point with photographer Mark Small and fellow marshall Eddie Thraves and we were feverishly debating how many runners there might be… they just never stopped streaming past us in a technicolour ribbon of sweat wicking fabrics. However, despite our guesstimate of “about 450”, there was in fact a total of 593 people walking, jogging, running or any combination of the above at Ashton Court today, which is the second highest number of participants EVER at Ashton Court parkrun. Our closest neighbours at Eastville parkrun welcomed 506 parkrunners today, so clearly everyone is sticking to their new year’s resolution to parkrun more regularly. 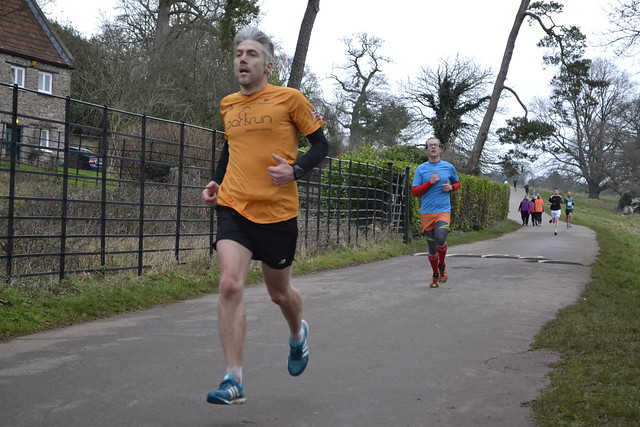 Flying down to the end of his 50th parkrun is Mattthew Crocker (photo: Mark Small)

We also celebrated as some key milestones were reached. Harry Constable is a new member of the junior 10 club having loyally completed all of his parkruns at Ashton Court. The newest recruit to the 50 club is Matthew Crocker, who is also committed to our hill having run all but four of his parkruns with us. Celebrating 100 parkruns is Mike Roberts, who has completed 95 of his 100 runs at Ashton Court. While the appropriately named Ben Swift reached that splendid 250 milestone today, having first run on our course in 2012. Well done to you all. 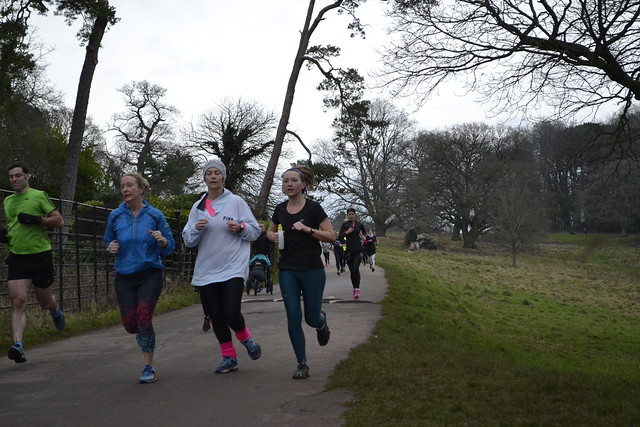 Wearing green, and about to become the 8th AC member of the 250 parkrun club, is Ben Swift. We don't think the 3 ladies on the right were parkrunning ~ perhaps they'll come along next week instead? (photo: Mark Small)

Not every milestone is an official one that earns a t-shirt but they’re still big achievements. Reaching 200 parkruns today were Nigel Robbins and Michael Smith. Nigel has run 195 of his 200 runs at Ashton Court, while Michael is clearly more of a fan of tourism than Nigel as he has ventured away from Ashton Court for 38 of his runs. We’re pleased that both came back to us for their landmark runs today. 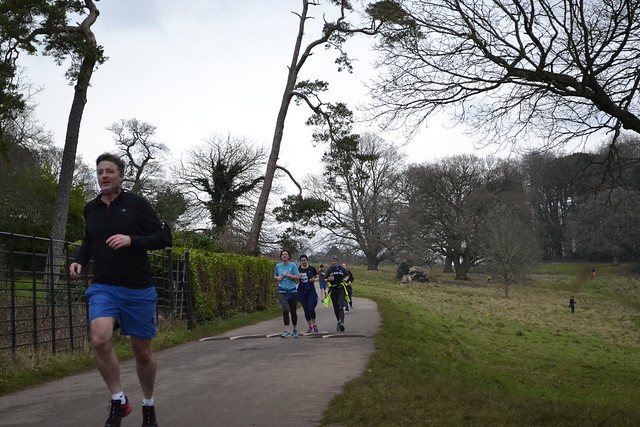 Another milestone in any parkrunner's life is their first event. This morning 51 brand new parkrunners joined us at Ashton Court, and we hope they enjoyed the experience and that they'll return soon, and on a regular basis too. 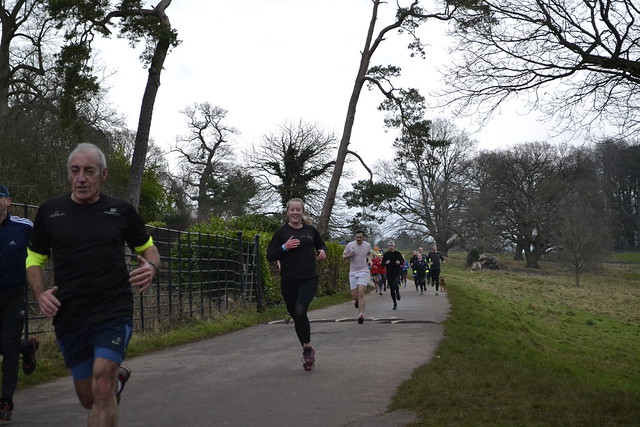 All the way from Falkirk parkrun came Shona Buchanan, who seems to be enjoying her first trip to Ashton Court (photo: Mark Small)

There are of course hundreds of other parkruns all over the world, and amongst this morning's crowd of participants were 52 who had run parkruns elsewhere but were visiting Ashton Court for the first time. Having looked at the 20 of them who have now run 10 or more parkruns, we think Shona Buchanan was furthest from her home event, which is Falkirk parkrun. Other contenders included Steve Catterall (home event Crosby parkrun), Victoria Solly (Forest Rec parkrun), Rosie Rose (Bramley parkrun), Giles Corner (Tooting Common parkrun), David Hooper (Reigate Priory parkrun) and Claudia Havranek (Oxford parkrun). 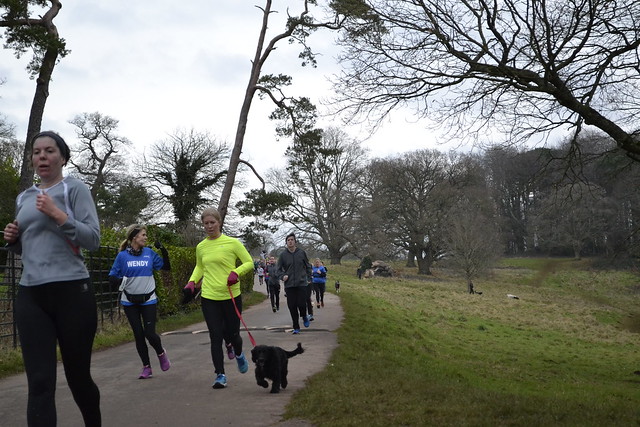 Caroline Hoole follows her four-legged friend down the hill, hiding whoever it is that Sole Sister Wendy Netto is chatting to (photo: Mark Small) 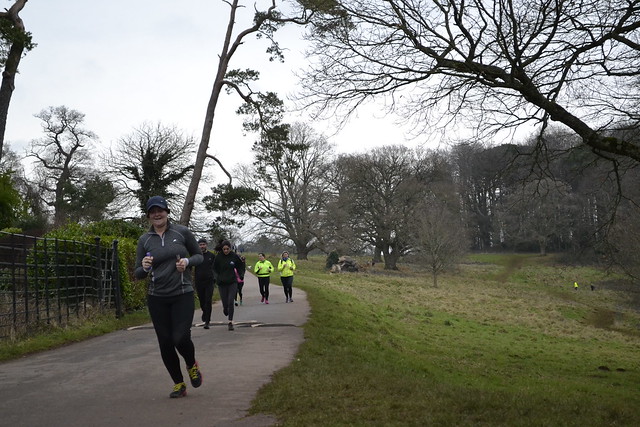 Rosamund Mogg was one of the 2 Sole Sisters to achieve pbs this morning (photo: Mark Small)

Many of those listed above are amongst the members of North Bristol Sole Sisters, 19 of whom came along today. Some had run here before, and 2 - Rosamund Mogg and Donna Abbott - achieved pbs, no mean feat bearing in mind that having finished they then ran back up the hill on their way to complete a further 7½ miles! 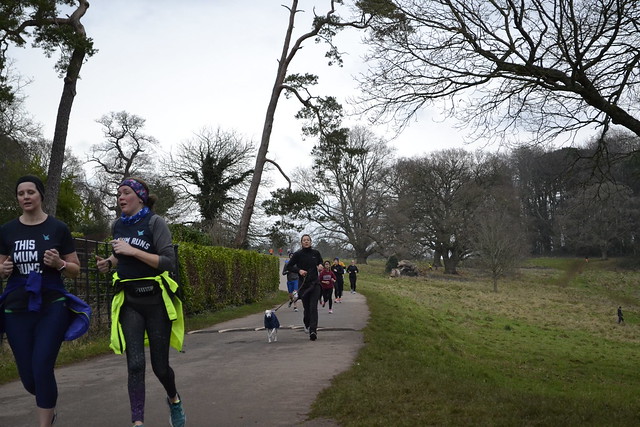 These Mums Run - Diane Kurylo on the right, running with someone we don't know. Just behind is Emma Cordeaux (photo: Mark Small)

Members of This Mum Runs also came along today. Only three - Rachael James, Lucy Dymond and Diane Kurylo - show in the results but there were many more than three This Mum Runs t-shirts in the throng this morning. Two other clubs were well represented - 30 runners are members of Bristol & West Athletic Club, and another 21 belong to Great Western Runners. I'm proud to be one of the 41 Southville Running Club members who either volunteered or ran here today. 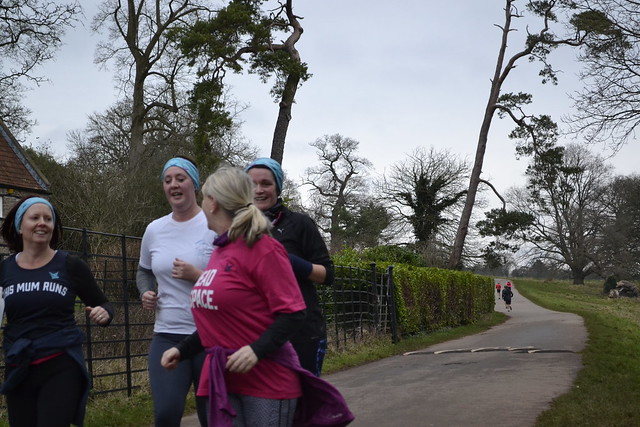 Four more of These Mums Runs ~ Rachael James and Gina Jennings in front, nattering with Caroline Lambert and Ruth Drury, who were both running their first parkruns (photo: Mark Small)

Volunteering at parkrun is a really easy but rewarding thing to do. None of the roles are difficult and you don’t need any experience. It will be clearly explained what you need to do and everybody is friendly. Plus, you get to bask in the glow of making hundreds of parkrunners happy AND you will be thanked more times in one hour than you ever thought humanly possible. If you’d like to find out more, please email ashton-courthelpers@parkrun.com. Thank you! 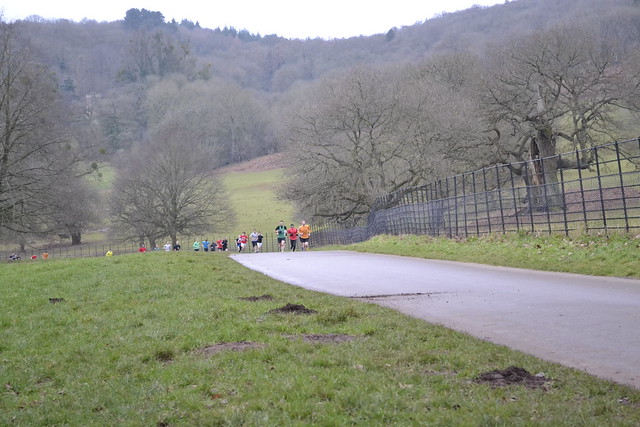 A quiet morning in the park, with the Deer Park to the right ~ and here comes the technicolour ribbon of sweat wicking fabrics! (photo: Mark Small)

We had Southville Running Club member Mark Small taking photos for us this weekend, and you can find his great set of images, together with our entire photo archive, by following this link here (or here if viewing on an iOS device).