I’m afraid that the report on Ashton Court parkrun #341 has to start with an apology. Last week’s report mentioned the 38 people who had completed their first parkrun, and invited them to return as soon as possible, so that they could see the views from the Ashton Court plateau. By my count, 8 of them returned at the first possible opportunity, only to find that the views were little better, with low cloud and drizzle turning Bristol into a grey mass on the horizon. At least 7 of those 8 returners improved their times though, so they had a new personal best time to console them. 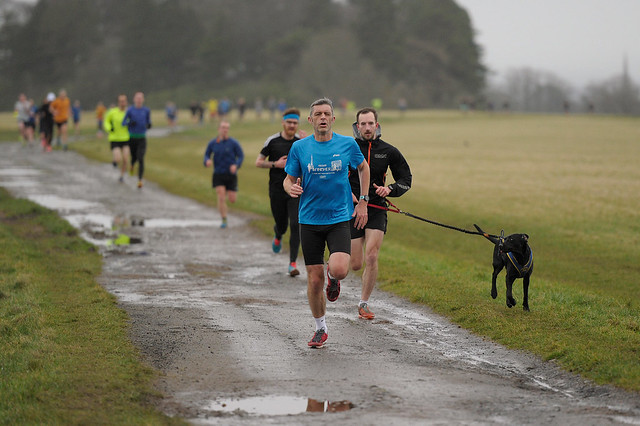 A colourful photo of a gloomy morning, high up on the flat bit! Here's Craig Webster in the blue, visiting us from Lanhydrock parkrun for the ninth time and on his way to a first sub-19 minute finish here. Just behind Craig is Joe Prichard - the two of them had traded places by the time they finished (photo: Suze Eyles) 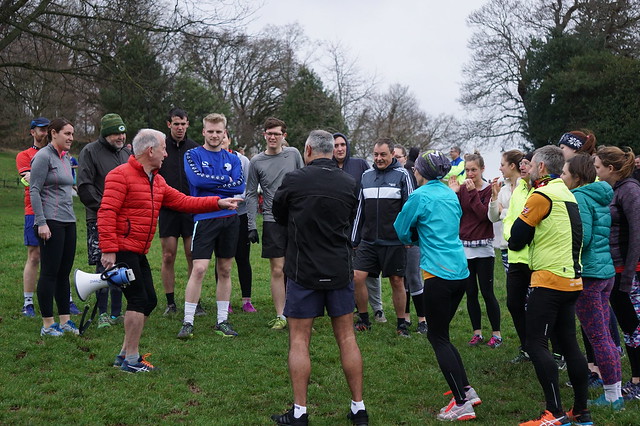 60 people completed their first Ashton Court parkrun, with 20 of them completing their first ever parkrun anywhere. 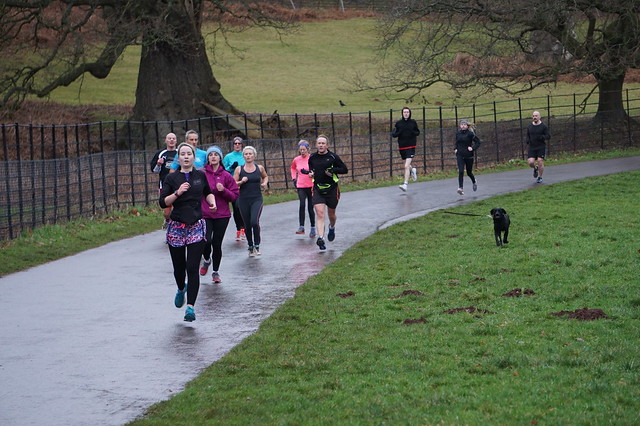 Almost certainly winning the morning's snazziest shorts contest is Lydia Omodara, visiting us for the second time from Beckton parkrun, closely followed by Stephanie Firth, one of the previous week's first timers who came back to do it all over again, and who achieved a pb (photo: Sarah Jones)

Further into their parkrun journeys, a number of our runners reached various landmarks. Jennifer Owsley ran her 150th event, all bar one of them on the Ashton Court hill. Read what you will into the fact that Jennifer’s fastest time in those 150 runs was at the one that she didn’t run here. Sarah Dodge ran her 50th parkrun, all of them here at Ashton Court. 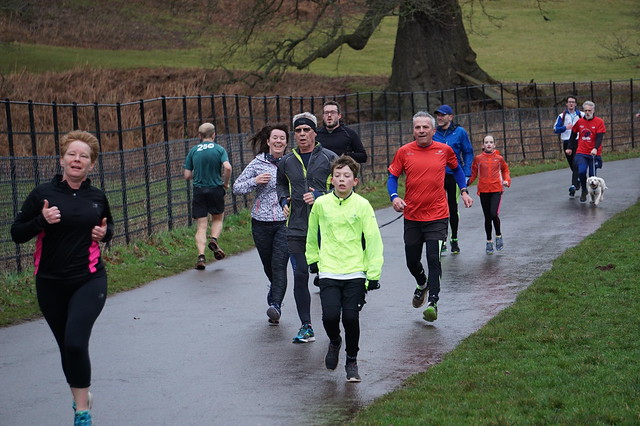 Leading this particular pack of regular parkrunners is Sarah Dodge, about to complete her 50th parkrun, all of them having been at AC. This puts Sarah in 12th place in the list of people who've run all their parkruns here (we think) (photo: Sarah Jones)

Two relative newcomers to AC are Jemma Batte and Phil Harfield, whose parkrun adventures started at Richmond Park and Bushy Park respectively. Jemma and Phil both ran their 50th parkruns this morning, festooned with appropriate balloons! 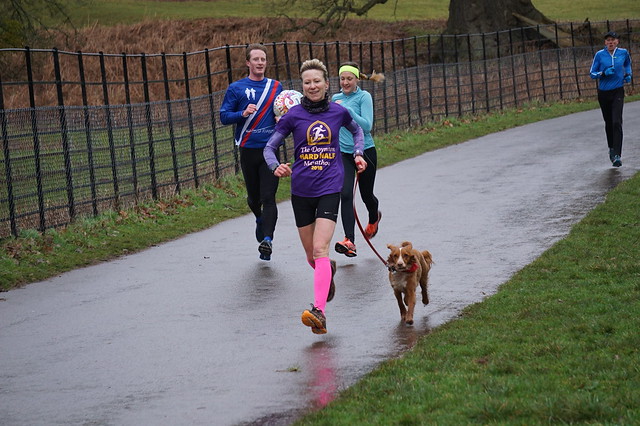 Not quite "festooned with balloons" perhaps, but just behind Jane Colman and Bailey are Phil Harfield and Jemma Batte, enjoying their 50th parkruns - great photo with just one foot on the ground and 11 off it! (photo: Sarah Jones)

In news from elsewhere, Ashton Court regular Jane Duffus celebrated her 150th event, at Burgess parkrun, while Mimi Smith, who has run 10 parkruns with us in recent months, completed her 50th at her home event, Bromley parkrun. 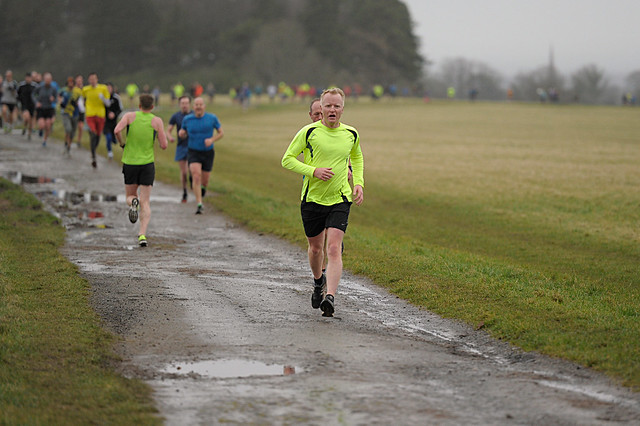 A great shot of first finisher David Awde on his way down, with most of us still toiling up to the summit of the course (photo: Suze Eyles)

At the front of the field, David Awde was the first finisher, as he has been on each of his last five visits to Ashton Court, and Louise Wade was the first female finisher for the first time. Those further down the field may be relieved to know that these runners are breathing just as hard as everyone else when they reach the top of the hill! 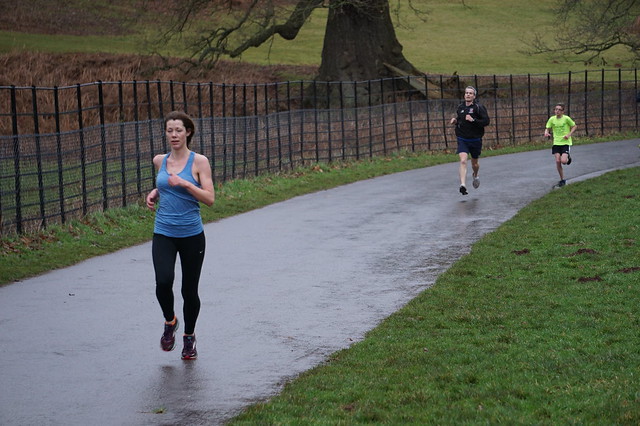 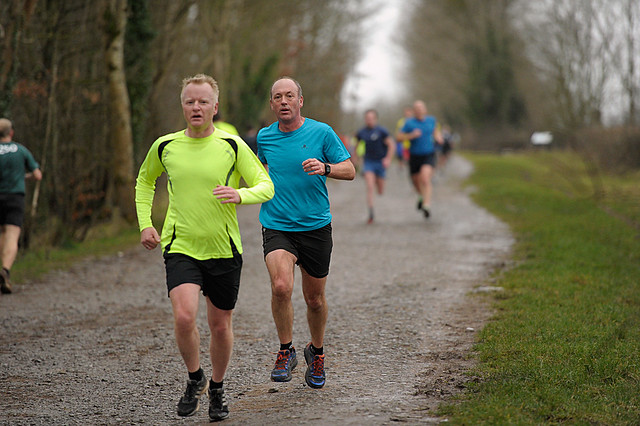 After the finishing line, Bill Lawrence was in charge of the funnel for a remarkable 50th time, greeting the finishers with a trademark smile. Positions are still available on the volunteer roster for future weeks .... 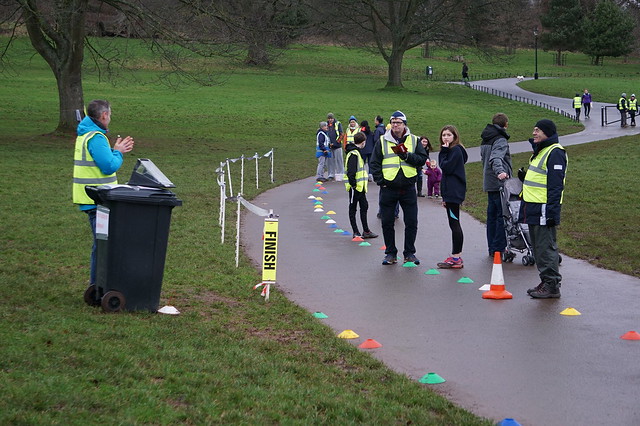 Bill Lawrence's domain, the finish funnel . . plenty of volunteers during a quiet moment. This is the closest we have to a photo of Bill this week, his yellow cap just visible behind photostopwatch wizard David Taylor (photo: Sarah Jones)

And in the cafe afterwards, this week’s Australia Day was marked with a traditional Australian Lamington cake, thanks to Greg Condon and daughter Lauren Russell, who have run 30 times at the splendidly named Tuggeranong parkrun. 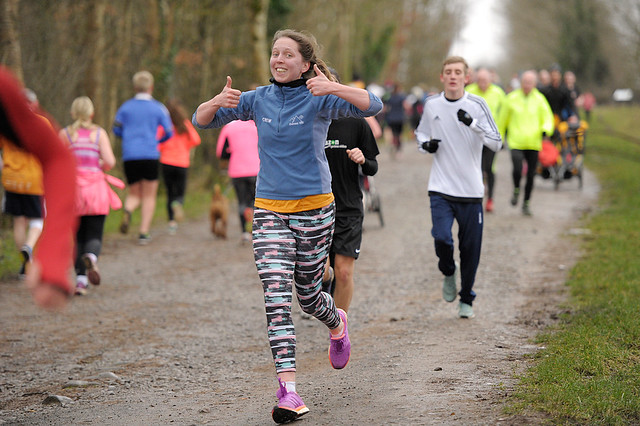 It's alright, this parkrun lark isn't it! Sarah McAllister certainly seems to think so, and why not, she was on her way to a pb! (photo: Suze Eyles) 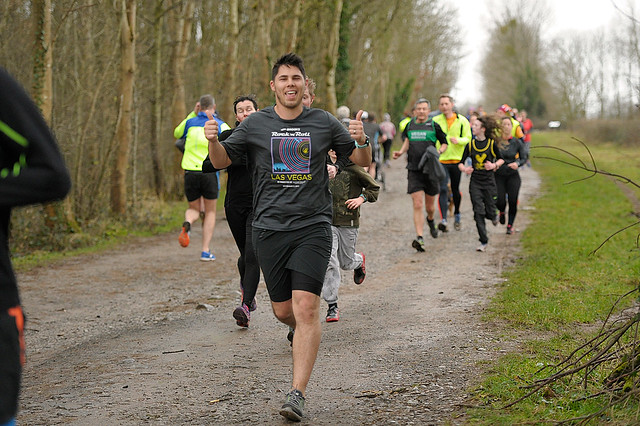 Casper du Buisson seems to agree, visiting us for the first time from Tring parkrun, a favourite of several AC parkrunners. Casper is one of 4 members of Dacorum & Tring AC who came to see us this morning (photo: Suze Eyles) 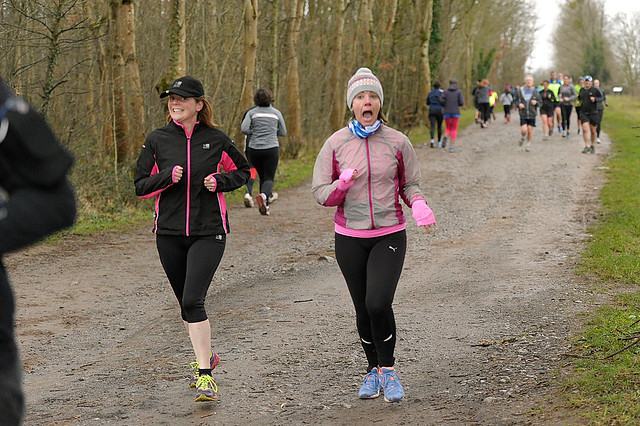 We're really not sure what Karen Weider and Sarah Sullivan think about it but we hope they enjoyed their morning's parkrun. Sarah's been here 3 weeks in a row now, and this was her 2nd pb. Karen was running here for the 6th time, and she recorded her 2nd best time yet. We think that's a great start to the weekend! (photo: Suze Eyles)

We had 2 photographers today, Sarah Jones and Suze Eyles, and you can find their wonderful photos, together with our entire photo archive, by following this link (or this one if viewing on an iOS device).