“There is harmony in autumn, and a lustre in its sky, which through the summer is not heard or seen as if it could not be, as if it had not been.” Percy Bysshe Shelley. 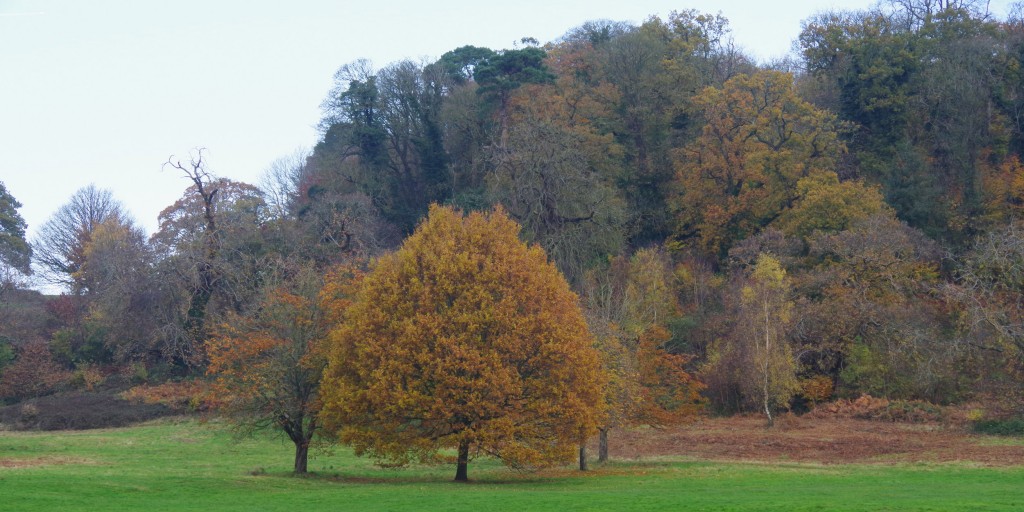 “Autumn is a second spring when every leaf is a flower“ Albert Camus
(photo: Rich Kenington)

The trees are changing colour, while the large oak where we gather for the morning’s briefing has lost virtually all its leaves. The sun shone pleasantly if weakly, and there was barely a breath of wind. 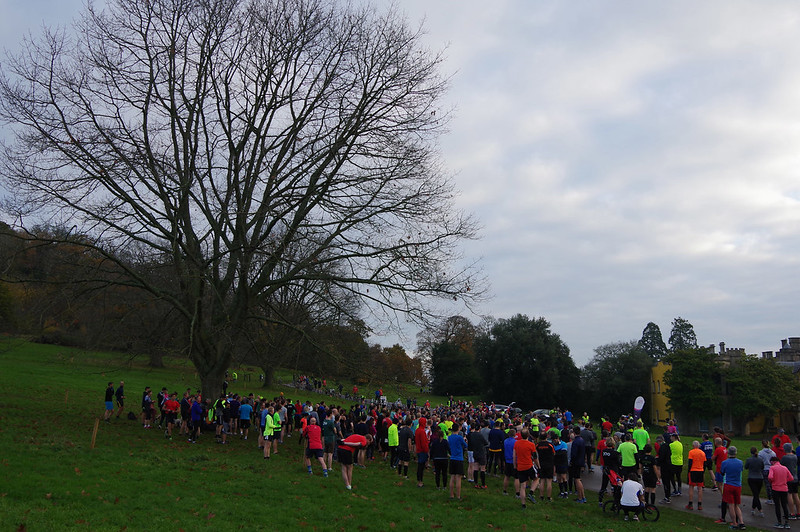 Our beloved Turkey Oak is already preparing for Springtime, as our parkrunners prepare for the morning's excursion up and down the hill (photo: Rich Kenington)

So what better to do than enjoy Ashton Court parkrun number 432! Certainly 443 of you thought that, with 31 people helping with marshalling, timekeeping, token scanning and sorting and all the other volunteer roles that are needed for each event.

The colour of the Mansion's walls ("like the inside of a Crunchie bar" someone once said) blends in well with the seasonal shades, in contrast to the many colours worn by our crocodile of parkrunners (photo: Rich Kenington)

We’ve had the words from Shelley, but for poetry in motion we could do no worse than look towards our first finisher, Arthur Dickson-Bell, who ran quickly at his first ever parkrun at Ashton Court last week, and even quicker at his second parkrun this week. And first woman across the line, Claire Hammett, also recorded a new PB, beating nineteen minutes here for the first time and becoming the 9th fastest female we've seen at Ashton Court. Arthur and Claire are both in their early twenties, so have youth on their side. But parkrun also has the age grade statistic that rates your performance against the world record pace for your age. And our top performer this week was Stuart Ellis, whose time of 22:22 gave him the age grade performance of 79.81% on his 100th parkrun to boot. And he’s got around fifty extra years on Arthur and Clair! Second only to Stuart in age grade was our oldest runner, Michael Coupe, with an impressive 79.42% age grading. 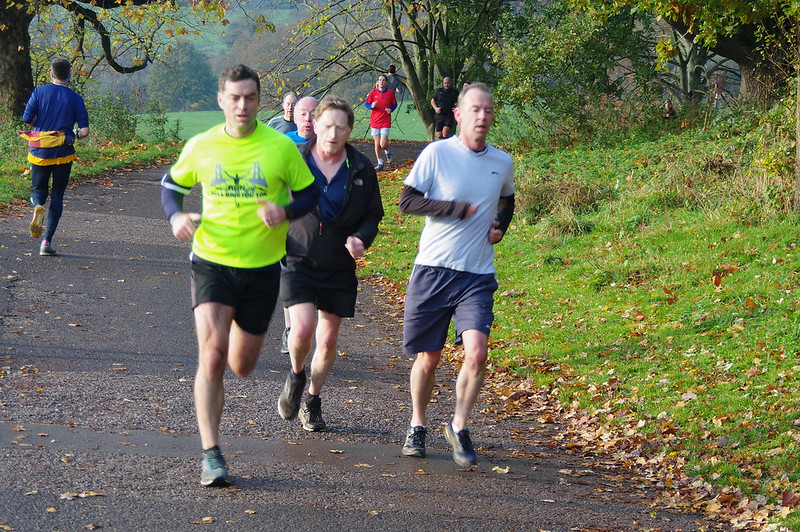 In yellow is Ben Swift, at home here at Ashton Court and running his 343rd parkrun. On the right is Richard Sumner, playing away for only the second time from his home at Weymouth parkrun in this his 42nd parkrun; and in the middle of the trio is Peter Rooney, taking part in his 1st parkrun (photo: Rich Kenington)

At the other end of the age scale we had 4 juniors under 11 recorded in the results, with one of them, Paddy Parmiter recording a new PB. The under 11’s have to run with a responsible adult for safekeeping, and Simon Parmiter would have been there with Paddy providing suitable words of encouragement I’m sure! Mind you, Paddy might say he could have run faster if Simon had kept up with him better. Arthur Allen was the last of the juniors to finish, but that’s a good thing because he was one of our tail walkers, making sure everyone got round safely. Thank you Arthur! 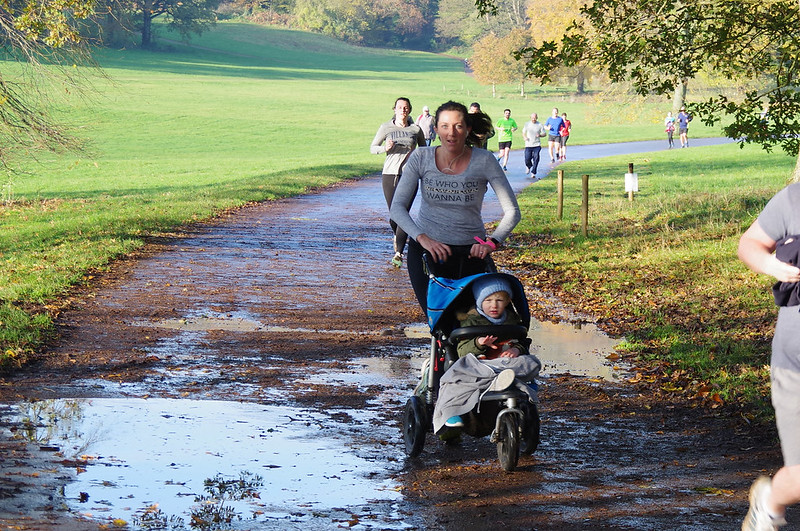 We haven't counted how often Eve Blackmore has pushed a buggy up and down our course, but this was her 100th parkrun at Ashton Court, and her 133rd in all (photo: Rich Kenington)

We had 17 parkrunners doing their very first parkrun. Christopher Hill was one of these, running up and down our hill in 25:43, while Daniel Squibb avoided being a damp Squibb by choosing one of the nicest Saturdays in November to complete his first parkrun ever. Another 48 runners tackled the Ashton Court course for the first time, having completed at least one parkrun somewhere else, and the fastest of these was David Leahy, who was our second finisher in 17:58. David’s only other parkrun was at Newark three months ago. Another first timer and finishing not far behind David to be fifth across the line, was Adam Hands whose first parkrun at Ashton Court comes after a hiatus of over five years. His three previous parkruns had all been at Newcastle. 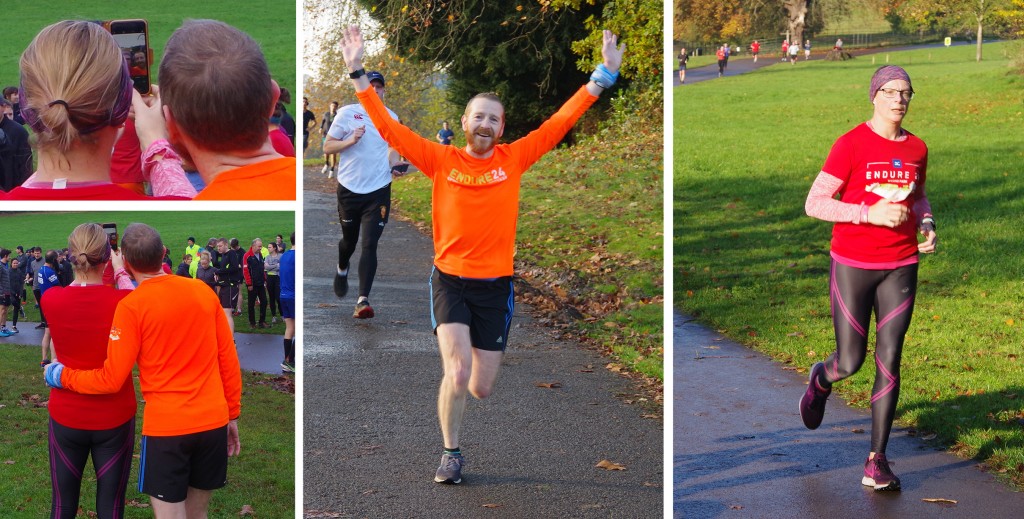 I didn't get their best side until during the run, but this was too good an opportunity to miss! Zoe and Darren Lambert were visiting us for the first time from Newbury parkrun, and both were running their 78th parkrun. They were kind enough to thank us for a "great run" in Facebook later in the day. Thank you too! (photo: Rich Kenington)

First timer Roman Lagnado also caught my eye, as he describes himself as a runner with the Sexy Walrus club. While today was a nice change, we’ve certainly had the weather for walruses recently. The Sexy Walruses hold a mad-sounding annual handicapped triathlon in Oxfordshire, although Roman normally parkruns in the London area. He is the seventh Sexy Walrus to complete an Ashton Court parkrun. The “What took you so long award” (no prize it’s only for fun) goes to Rory Morrow who had done 214 parkruns elsewhere before coming to Ashton Court. Rory has done most of his previous parkruns at Craigavon in Northern Ireland which is somewhat flatter than Ashton Court, although the lakes in the middle of the course are much larger, and possibly deeper, than the potholes at the top of our course. 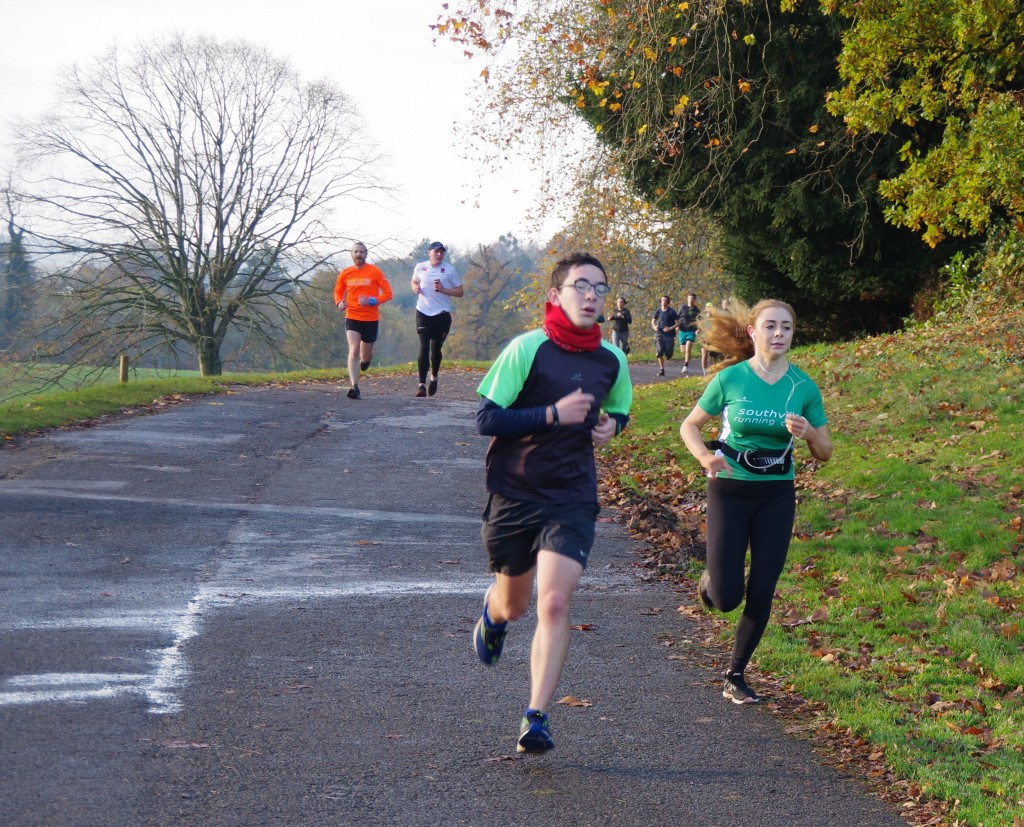 Here's Rory Morrow, about to complete his 215th parkrun, and his 1st here, alongside Sophie Patten, taking part in her 2nd parkrun and on her way to a pb (photo: Rich Kenington)

Overall, we had 50 runners record new best times right from our first finisher all the way through to Karen Fletcher, who has now recorded four PBs in her nine runs at Ashton Court. Rob Beaver and Hayley Beaver both recorded PBs on their second parkruns. Well you wouldn’t expect the Beavers to have any trouble getting through the puddles on our course would you! 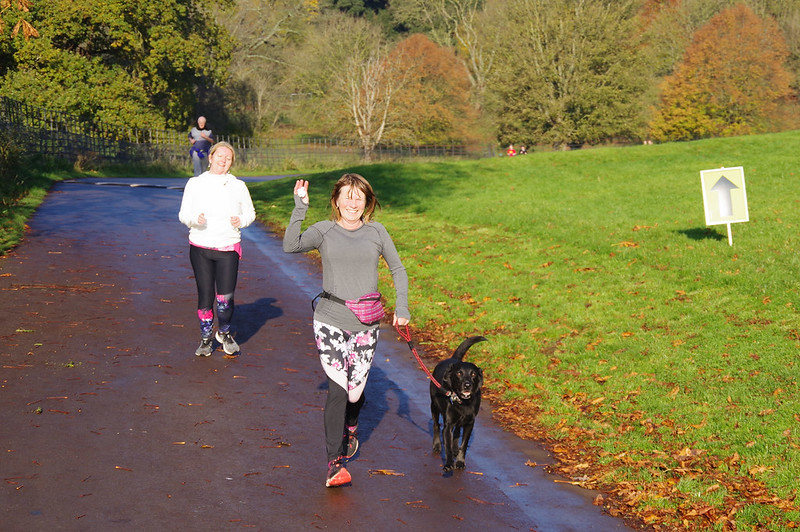 Giving us a wave is Karen Fletcher, on her way to finishing 27 seconds quicker than before, with Angela Holland close behind (photo: Rich Kenington)

The classic poets celebrated their heroes in iambic pentameter, while we like to celebrate ours over five kilometres. And whichever way we describe performances, everyone who takes part is a hero, runner and volunteer. But we do like to call out the runners who have reached milestones, especially if they bring cake, so a big well done to Clare McLachan who completed her 200th parkrun, Kate Darbyshire and Jennifa Burgess who completed their 150th’s, and Stuart Ellis who I mentioned earlier completing his 100th event. 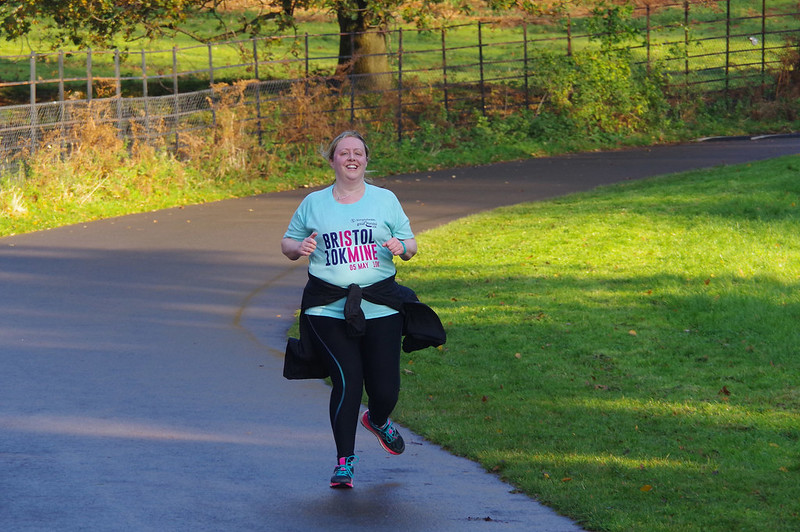 Lovely to see Clare McLachlan enjoying her 200th parkrun (195 of them here) so much (photo: Rich Kenington)

And the best thing is we can do it all again next week. 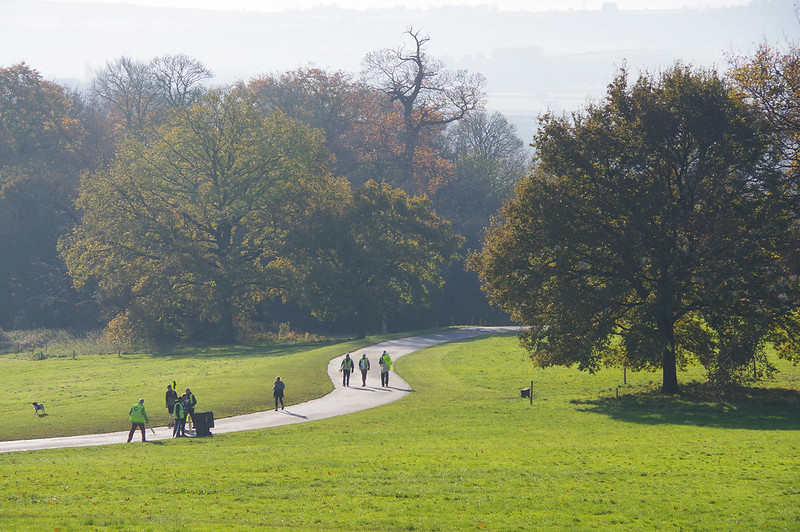 As the course marshals return to our assembly area the start and finish volunteers pack our equipment away, ready for our 433rd parkrun next Saturday (photo: Rich Kenington)

Rich Kenington took photos for us today, and they're on our Flickr pages. You'll find them, together with all our other photos, by following this link.

We've recently begun to add photos to our Google Photos page. It'll be a while before we catch up, but with a separate album for each event it's easier to find our back numbers! This link will take you to them.