After a week of bitterly cold weather, a soggy Friday and the threat of a wet windy Sunday, this week’s Run Directors (RDs) Janet O’Connell and Liz Hill managed a near Christmas miracle of arranging a dry and warm (well for December!) Saturday morning. Traditionally December sees some of our lowest attendances of the year. Despite the appeal of Christmas shopping, resting up before Weston AC’s Christmas Cracker race on Sunday, the cross-country race in Blaise Castle in the afternoon or maybe even a few sore heads post-Christmas parties, this week 393 people ran, jogged and walked the course. 53 athletes recorded new Personal Bests. It seems unlikely our attendance will fall back to the levels we saw during the rugby world cup, but less said about that the better.

with the pre-run briefing completed, this crowd of parkrunners will be headed this way in just a moment or two (photo: Rich Kenington)

We welcomed 50 first timers to Ashton Court this week. Unusually two of this week's first time Ashton Court runners were running a milestone parkrun. Emyr Morgan started parkrunning at Eastleigh parkrun and is now a regular at Cardiff, this week he ran our slightly hillier course for the first time and his 250th parkrun, earning himself a green 250 T-shirt. David James is a regular at Tonbridge parkrun, running at Ashton Court this week earnt himself his first milestone T-shirt for his 50th parkrun. On the other end of the scale 12 runners completed their very first parkrun, we hope this is the first of many and we see you all again soon. Amongst the other first timers to Ashton Court included a candidate for the North Somerset seat in this week's election. For political neutrality reasons I'll say no more, although I'm guessing despite her supporters’ subtlety some of the more eagle eyed runners could guess what party she is standing for. 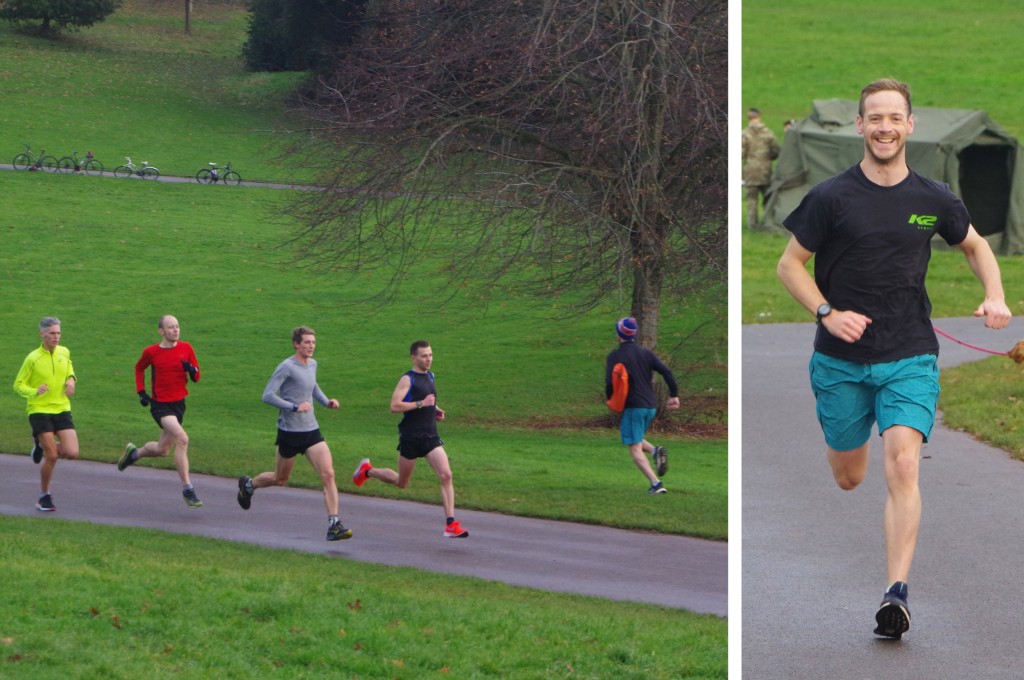 3 of the first 4 early leaders got off to a flying start. But who's that running in the wrong direction? It's Duncan Colquhoun, who wasn't quite the last starter of the morning, and who managed to overtake at least 310 parkrunners on his way to finishing in 79th position! (photo: Rich Kenington)

Soon to be also running in a red T-shirt our second runner completing his 50th parkrun was Luke Stanley. Luke joined us at Ashton Court for his first parkrun in January 2018. Two of our junior parkrunners completed their 10th parkruns this week for a white, juniors-only 10 Tee. Whilst Rosie Walker only started parkrunning this year, completing 10 parkruns in under 6 month including her PB last week, Joseph Bussell took a slightly more leisurely route to his 10th parkrun. Joseph started parkrunning in 2016, also ran his PB on his 9th parkrun but back in April and held out the suspense of his 10th till this week. 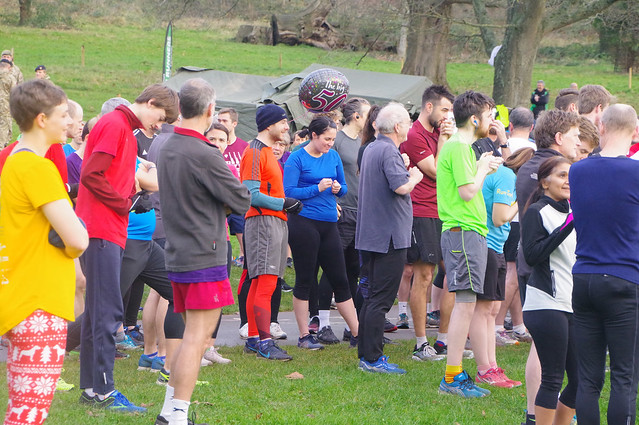 50th parkrun today! Big parkrun moment for Luke Stanley (he's the one with a hat on) (photo: Rich Kenington)

This week we had a bumper crop of people running their 250th parkrun, in addition to Emyr, Tim Neal-Hopes and Phil King also both earnt their 250 T-shirt. Phil King has been a regular face at Ashton Court since his first parkrun back in April 2013 and has run here 209 times. Tim Neal-Hopes on the other hand started parkrunning in Cambridge in 2012, joined us once for the first time in 2013 before more regular visits since 2016. In the meanwhile Tim ran at over 100 different parkrun events on his route to 250 parkruns.

Despite having the number "250" on his chest, Phil King now has 250 behind him, as his next parkrun will be his 251st! (photo: Rich Kenington)

Running their 100th parkrun this week at Ashton Court was Ian Hamblin and Shirley Clegg. Like Tim Neal-Hopes, Ian also started his parkrun journey away from Ashton Court, at the gone but not forgotten Little Stoke parkrun. Ian has run at many of the local parkrun, his 100th parkrun marked his 15th run at Ashton Court. Shirley Clegg ran her first parkrun here, in 2013, she has completed 78 ups and downs of the Ashton Court hill, and is the Ashton Court record holder for the VW65-69 age category. Many congratulations to all of this week's milestone runners. However long it's taken, however fast you've run, whatever locations around the world you've run, it's a great achievement and I hope you have enjoyed, and will continue to enjoy the journey parkrun takes you on.

the leader of this particular pack (in her apricot top) is Shirely Clegg, just under 5k away from completing her 100th parkrun (photo: Rich Kenington)

Shirley Clegg's second mention this week goes for her topping the Age grade table, gaining a WAVA of 84.34%. The VW65-69 age category is clearly a competitive age group here with the second place this week going to Alison Roberts in the same category with a WAVA of 82.38%, rounding up the top three was Michael Coupe with a WAVA of 82.14%. Rounding up this week's top 5 WAVA scores was this week's first finisher James Rodgers, whilst finishing as first female for the second time was Helen Faubel.

It was lovely to see Helen Faubel and Sorrel Langley-Hobbs return to Ashton Court after a long absence. They and their families are regulars at Burnham and Highbridge parkrun these days. Here's Helen, delighted (we think) to have finished first! (photo: Rich Kenington)

We often see people carrying balloons depicting a particular parkrun milestone that they wish to celebrate, including this week; Joe Pritchard's 50th run at Ashton Court. Rarely people wish to celebrate their 21st parkrun, instead Beth McMillan floated up the hill with her two and one balloons to celebrate her 21st Birthday, many happy returns Beth!

Here's our birthday girl Beth McMillan, with 2 friends to her left who ran without barcodes (I know!) and who for evermore will be known as "Beth's friends" (photo: Rich Kenington)

Also in the news this week the military invaded our regular start/finish area. When the volunteer crew turned up in the morning they were slightly surprised to find a number of cadets already entrenched in the park. Thankfully due to some excellent negotiating, a peaceful solution was found to sharing the space and both of our events were able to live happily side by side. There were some rumours of the Queen's shilling being offered to a few parkrunners after their run, we can only offer wishes of good luck to anyone who took up the offer. 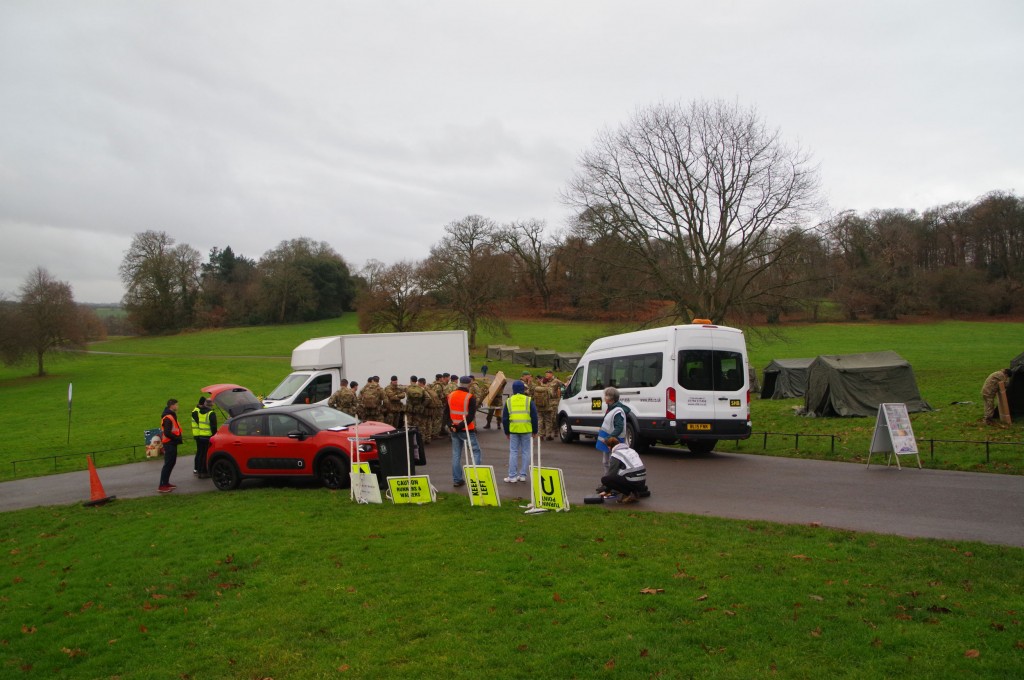 Stand off at the AC corral . . 8.15 on parkrun morning (photo: Rich Kenington)

On the 21st December we will be having our annual festive celebration, so dust off those Christmas jumpers, Santa hats or other festive wear of your choice for the run. After the run please join in the Christmas jollity in the courtyard for the bring and share picnic of cakes, mince pies, biscuits and anything else people are happy to bring and share. There are sometimes even healthy options available.

There's no need to wait until the 21st to wear that special Christmas kit as Emma Coles demonstrates (photo: Rich Kenington)

*WebFMS is the web based app the RDs use to process the timer and scanner data files prior to your results being sent to you by email or text, but you don’t really need to know this!

Hi-vis looks great at any time of year - thanks everyone! (photo: Rich Kenington)

Rich Kenington took some photos of the start of our parkrun, and they're on our Flickr pages. You'll find them, together with all our other photos, by following this link. They're also in Google Photos if you prefer to look at them there.