That’s what my mum would’ve said if I’d had 3 Curly Wurlys in the same morning! In the same week probably! But more of that shortly.

I missed Ashton Court parkrun on Saturday. Did you? Apparently around 50 people turned up there at 9am, so they won’t have missed the place, but I’m sure it seemed quite strange.

It’s only 6 weeks ago that I spent an anxious Friday night in Australia, wondering if the particular parkrun my brother and I hoped to visit would be on or not. The worry was that the air quality in the wake of the awful bushfires would be so bad the run would be cancelled. I’m pleased to say it wasn’t.

This past Friday was similar, as along with hundreds, thousands even, of others, I wondered if the last few parkruns that hadn’t already cancelled would still be standing on Saturday morning. Incidentally there's been some rain in Melbourne since then. My brother had to run through a puddle last week. Sounds dreadful!

Anyway, thanks to the dedication and thermal underwear of 4 teams of volunteers, Burnham and Highbridge, Clevedon Salthouse Fields, Eastville and Somerdale Pavilion parkruns went ahead on Saturday. 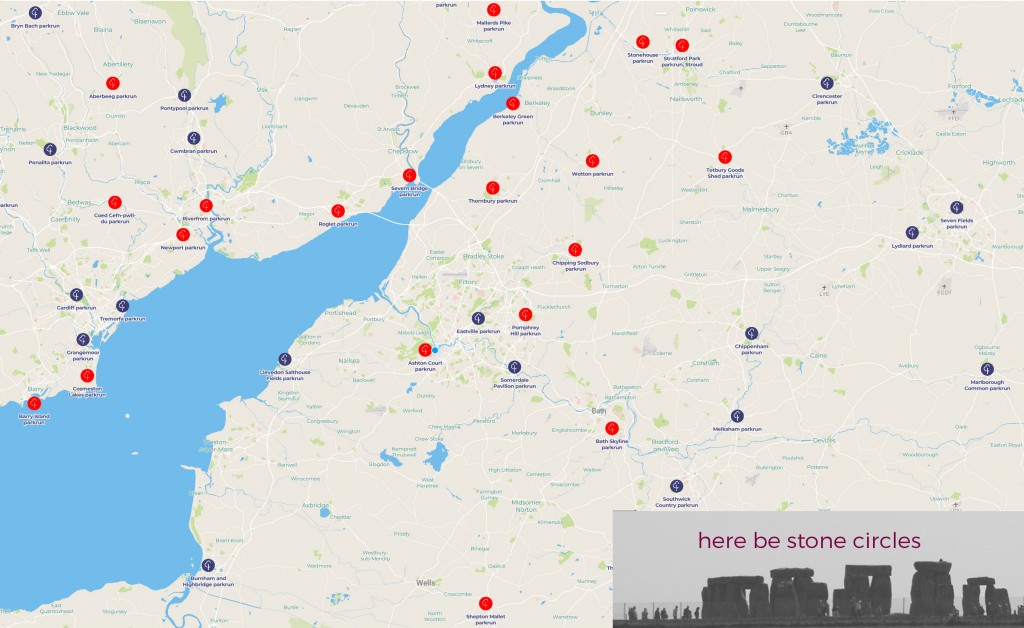 the red ones were off (graphic: Rich Kenington)

171 UK parkruns were cancelled. Most of them because of the menacing threat of Storm Dennis, although Wyre Forest parkrun cancelled because of Storm Brian, and Preston parkrun because their defibrillator was unavailable.

Apropos of nothing at all, the parkrun formerly known as Doncaster became Sandall Park parkrun yesterday.

I’ve tracked down the results of 197 parkrunners for whom Ashton Court is home, who found a parkrun that wasn’t threatened by either Dennis or Brian yesterday. There will have been others, no doubt, and I know it’s a pretty poor show, but I think 13 sets of parkrun results is more than enough for anyone’s weekend, and so I’ve drawn a line beneath them. Apologies if I’ve missed you.

96 of the 639 finishers at Eastville were from Ashton Court, as were 59 of the 277 finishers at Clevedon Salthouse Fields, 15 of the 331 who took part at Burnham and Highbridge, and 13 of the 111 at Somerdale Pavilion, and I’ve found another 14 Ashton Courters at 9 other different events.

21 Ashton Courters achieved pbs, and another 39 of us were visiting our chosen parkrun for the very first time.

(A list of all the results I've found is at the foot of this report.)

I don’t suppose Jordan Griffin and David Caple, the first parkrunning in France and the other in New Zealand, were quite as concerned as the rest of us about our storms.

I’ve just given away the fact that this week’s parkrunner furthest from home is David Caple. This was his 364th parkrun – almost one for every day of the year – and was at Millwater parkrun, a little way to the north of Auckland on New Zealand’s North Island. 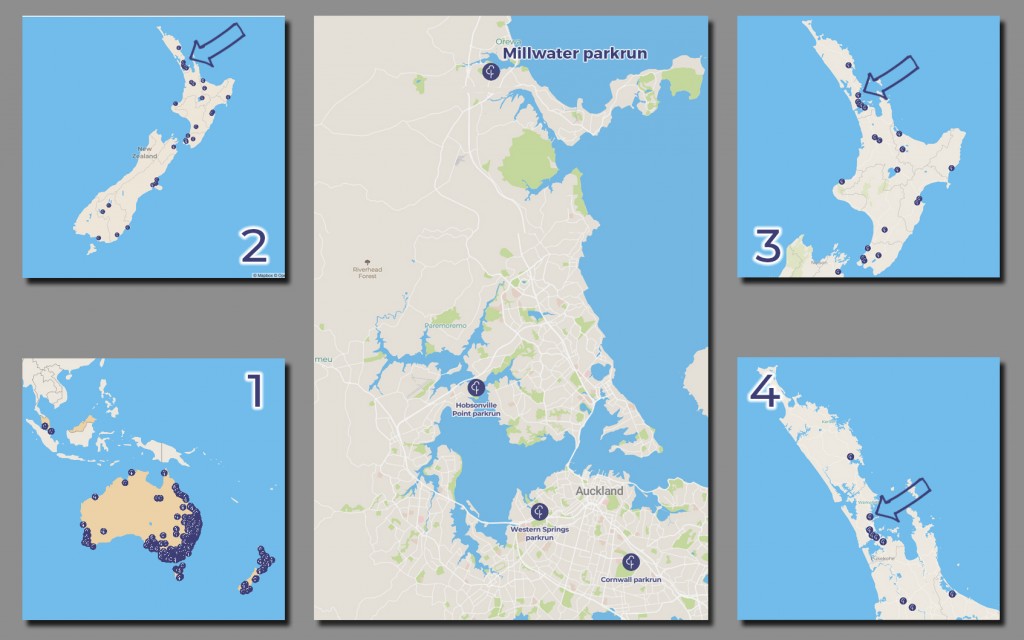 Millwater parkrun - all done and dusted before Friday had finished here in the UK (graphic: Rich Kenington)

We’ve a 3-way tie for this week’s “What took you so long” award (no prize, it’s just for fun). Liz Hill, Craig Brown and Sean Gregory had each streaked for 9 consecutive Ashton Court parkruns before taking their barcodes to Somerdale Pavilion, Clevedon Salthouse Fields and Eastville parkruns respectively.

Incidentally, connoisseurs of streaking can expect some big news on the subject in a fortnight’s time!

I made my way to Somerdale Pavilion parkrun, along with Caroline and Liz, where we soon met the handful of Ashton Courters who had also selected mud and dizziness. We played with the frame, did the parkrun, some of us had coffee and biscuits and then we went home. Except that ..

Somerdale Pavilion parkrun isn’t quite as simple as that. For one thing, as you may have heard, the course is bonkers. No other adjective really comes close to describing it. 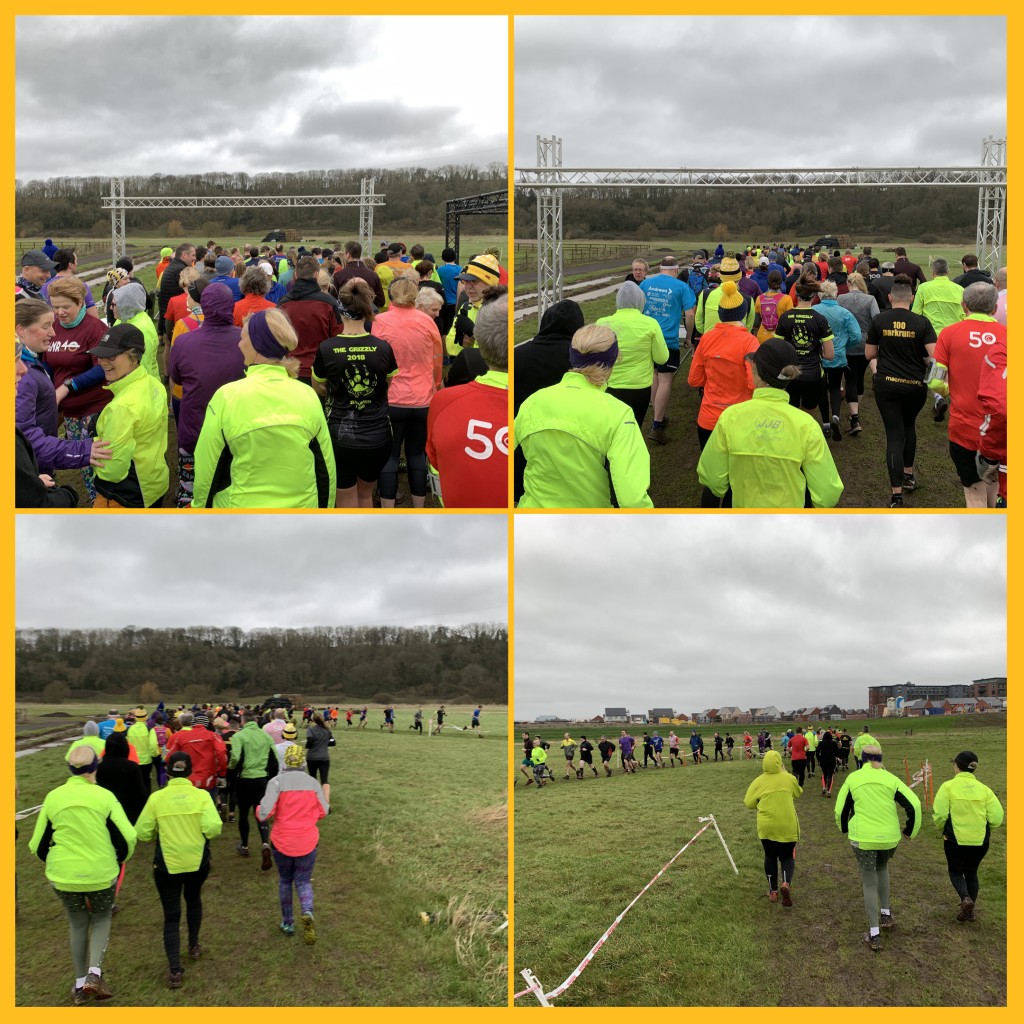 All lined up and off we go, with a turn to the right and a turn to the left. Was this a Rocky Horror Show Time Warp? (photos: Rich Kenington)

According to Strava there was absolutely no elevation on the course at all. Which I don’t think is entirely accurate. The course was described as “2 and a bit laps, including 3 curly wurlys” and we were advised to follow the one in front, unless we were the one in front. At least I think that’s what Run Director John Peake said, it was difficult to hear because of all those who had presumably heard it all before talking at the back. Grrrrrr!!!

It turned out where we were briefed was where we would start. All we needed to do was take a turn to the right, John shouted “go” and we went. 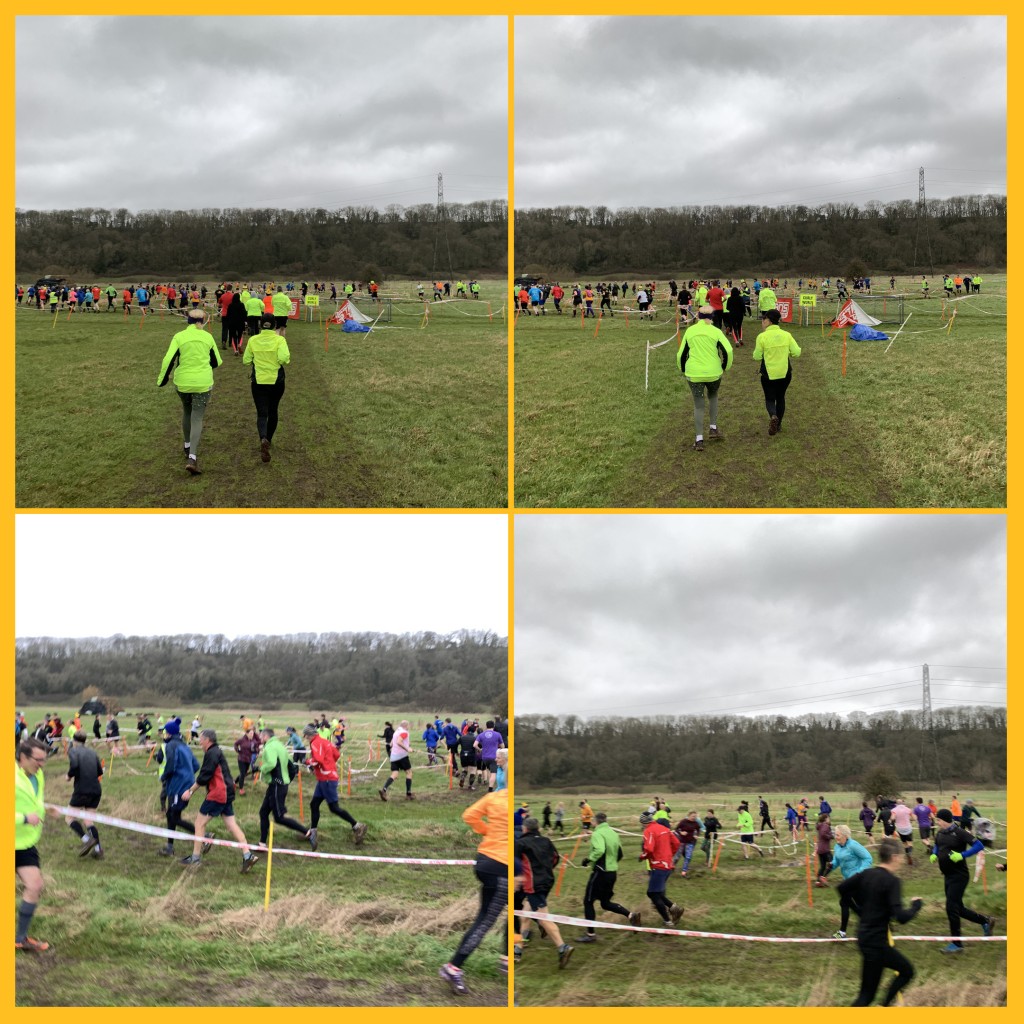 And then .. a maelstrom of parkrunners awaits (photos: Rich Kenington)

We ran in a straight line for a little bit, then turned sharp right and almost doubled back on ourselves, then turned sharp left (unless it was another right) and then before you know it we were running around in ever decreasing circles (like a Catherine wheel) until I almost tripped over my own feet on a very tight corner and the circles became ever increasing. After that, best not to ask really. It’s very confusing at ground level and I’ve no idea. So I’ve included this jolly helpful course map below, and you can work it out for yourself! 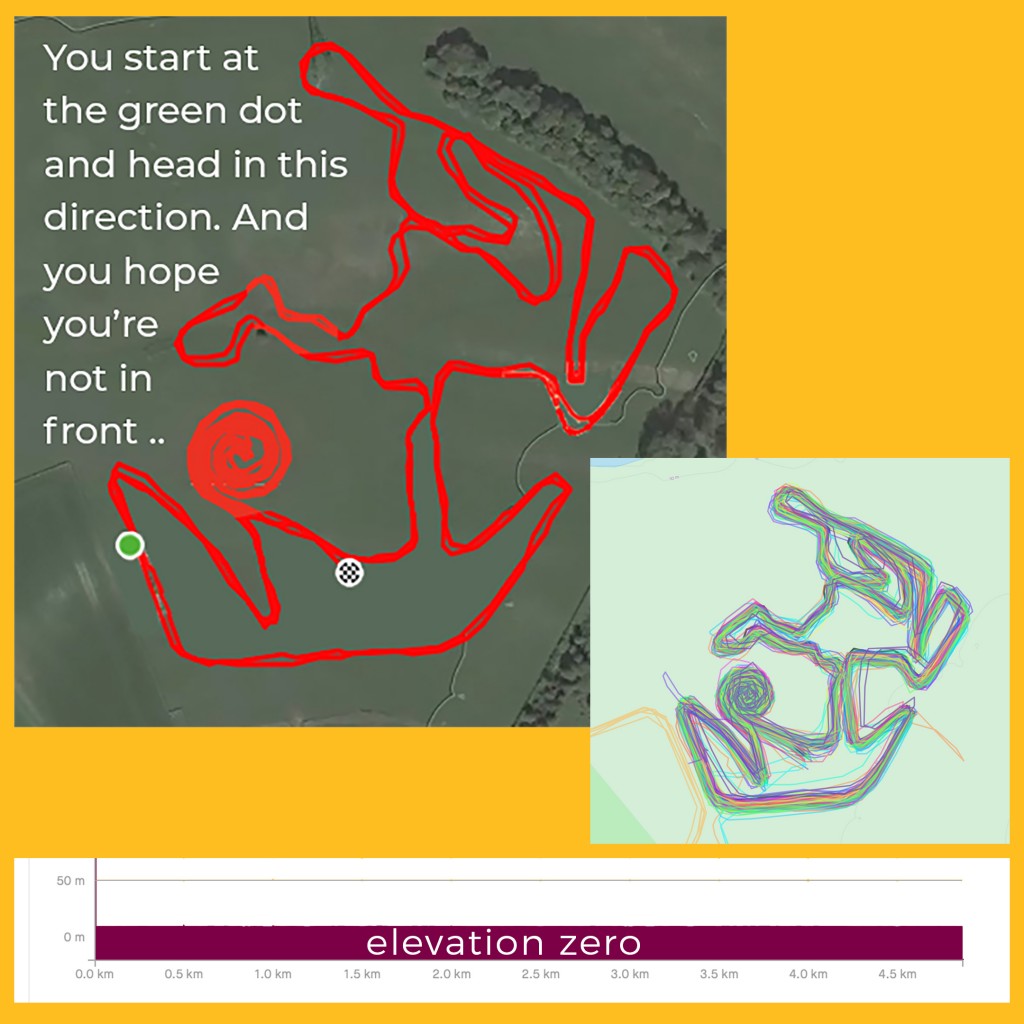 I lost count of how often I saw some people, and gave up wondering which way they were going and what lap they might be on, and yet I didn’t see some of my friends at all. They insisted they’d run the same run as me but I can’t help having doubts .. perhaps the forces generated by all the parkrunners revolving around the curly wurly trap some of them in an invisible cosmic vortex? 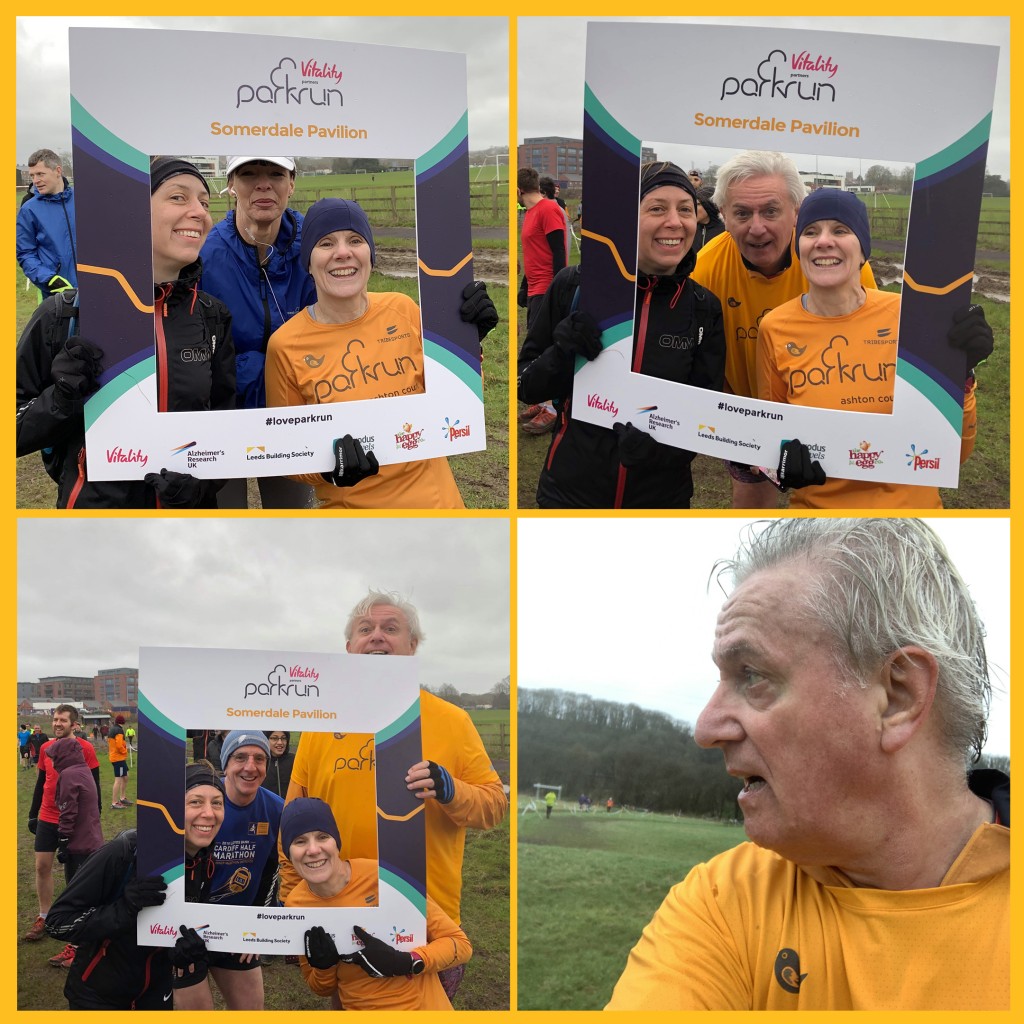 Three "befores" and one "how did I get here?" (photos: David Taylor and Rich Kenington)

I think it was close to the end of the second lap when a marshal told me to take care because I was approaching “the muddy bit”. Now by this point I’d barely stepped on a blade of green grass, so I wasn’t entirely convinced it could be any muddier here than elsewhere, especially as it hadn’t been “the muddy bit” on the previous lap (or two?). We had a laugh about it and then I waded on.

Finally, after about 40 minutes, I escaped the vortex for the 3rd time and found my way to the finish line. I was so pleased to see it that I even ran the last few metres!

My dreams of then going on to complete a lap of honour were, sadly, thwarted by the 110 parkrunners who had selfishly finished in front of me. One day ..

I loved this parkrun. Of course I did – it’s a parkrun! I’d’ve preferred a slopey bit somewhere to help rub the sleep from my eyes but you can’t have everything!

Together with Geoff Keogh I’d been involved in the initial discussions with Somerdale Pavilion’s management about setting up a parkrun there (they’d approached parkrun, which took the pressure off). I also met up with members of Bitton Road Runners and Fry Club Joggers, describing to them what else was needed to put a parkrun local to them in place.

I really enjoyed going to Somerdale Pavilion parkrun for the first time since those initial discussions and seeing what has become of those early aspirations and plans. The people who took up the challenge have done a fab job, with a course quite unlike any other parkrun that I know of, and certainly one that’s on pretty much every parkrunner’s to-do list. And just like everywhere else in the parkruniverse, there’s an amazing team of enthusiastic volunteers there who help make sure their parkrun happens every Saturday. Thanks to them all for Saturday’s parkrun.

I spent some time as I wandered around the course wondering what the Romans would have thought about what we were up to. There’s a villa underneath a nearby cemetery, and another buried beneath the chocolate factory. I don’t suppose they’d have understood volunteering, they had slaves after all. And they’d never have got a chariot around the curly wurly!

I didn’t only run a parkrun on Saturday morning. I also took a trip down Memory Lane. There was someone there who I knew when I was a member of the old City of Bath Athletic Club in the 80s, and several from when I ran with Bitton Road Runners in the 90s. I hardly spoke to any of them but it was heart-warming to see them still getting out for a run, whatever the weather, and enjoying being cold, wet, muddy and smiley.

Then there were a number of people I know from other local parkruns as well – it was lovely to bump into them once more. It was a little bit spooky to talk to a couple of people who knew of me but who I didn’t know. Spooky in a good way though. And of course; great to be with Carol, Caroline, Colin, David, Gordon, Isie, Jenny, Joe, John, Kieran, Liz, Lorraine and Pete from Ashton Court, our home from home!

And because it really wouldn’t have felt like a proper Saturday without visiting Ashton Court at all, meeting up with Elena, George and Louise Nikou for lunch there was a joy, and great fun too!

I hope you had as much fun as everyone I spent Saturday with did, and I hope we can parkrun at Ashton Court once more on Saturday. It’d be great to see you there too, but if you can’t make it, then wherever you may be at 9 o’clock on Saturday morning, may your barcode be with you! 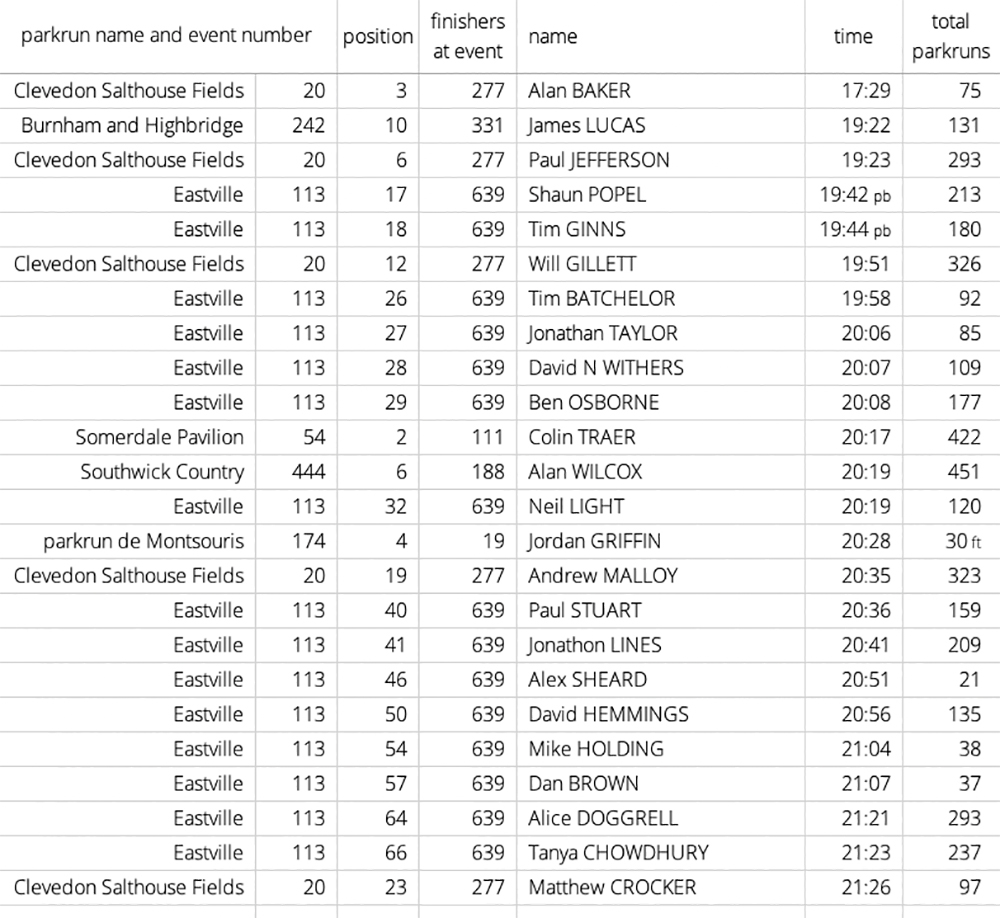 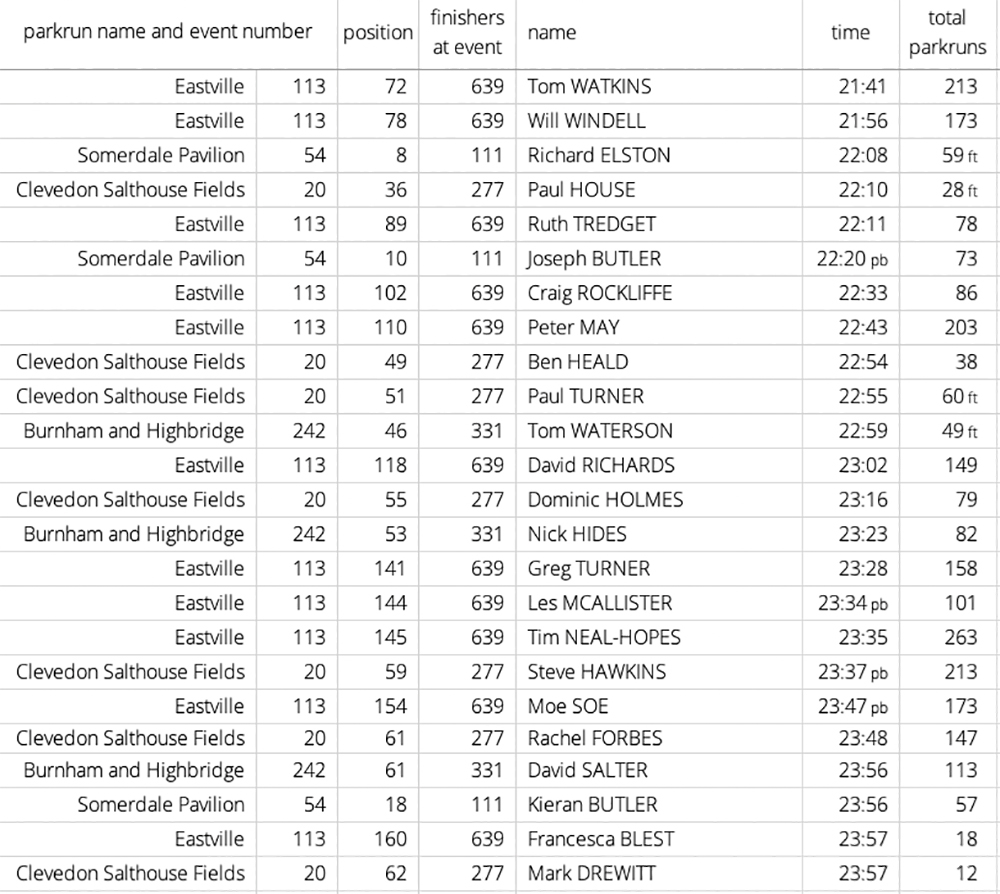 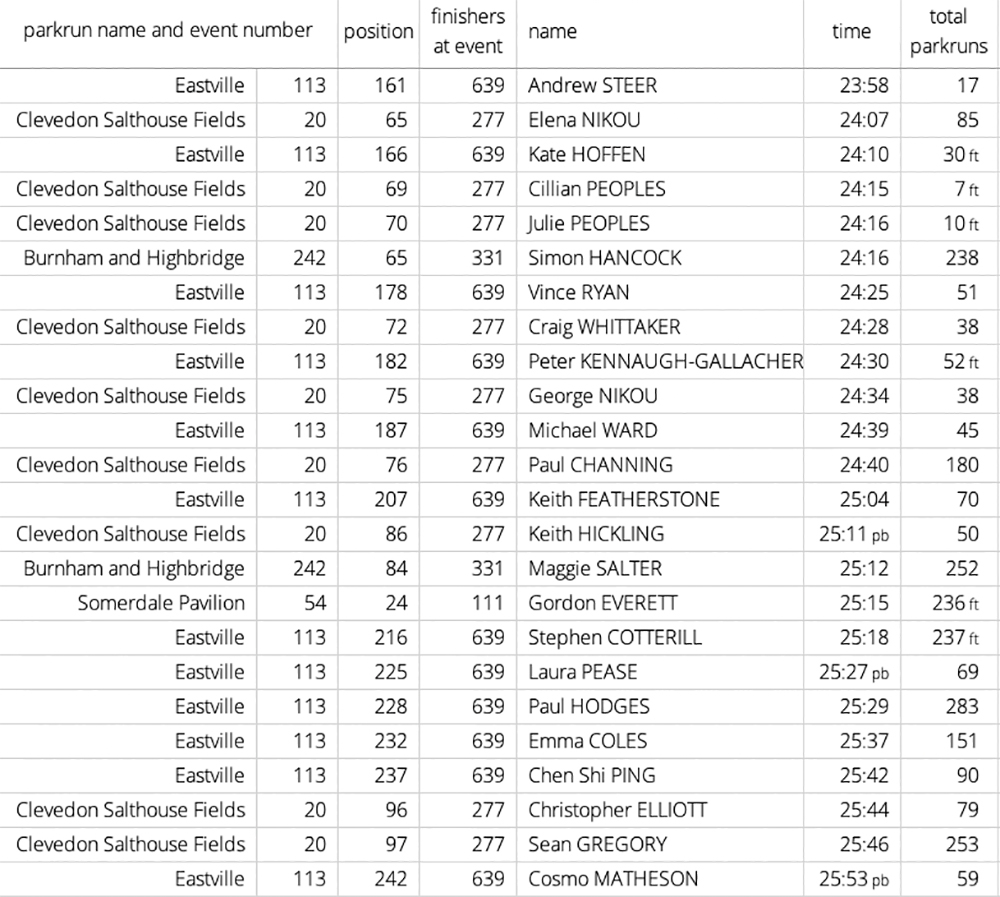 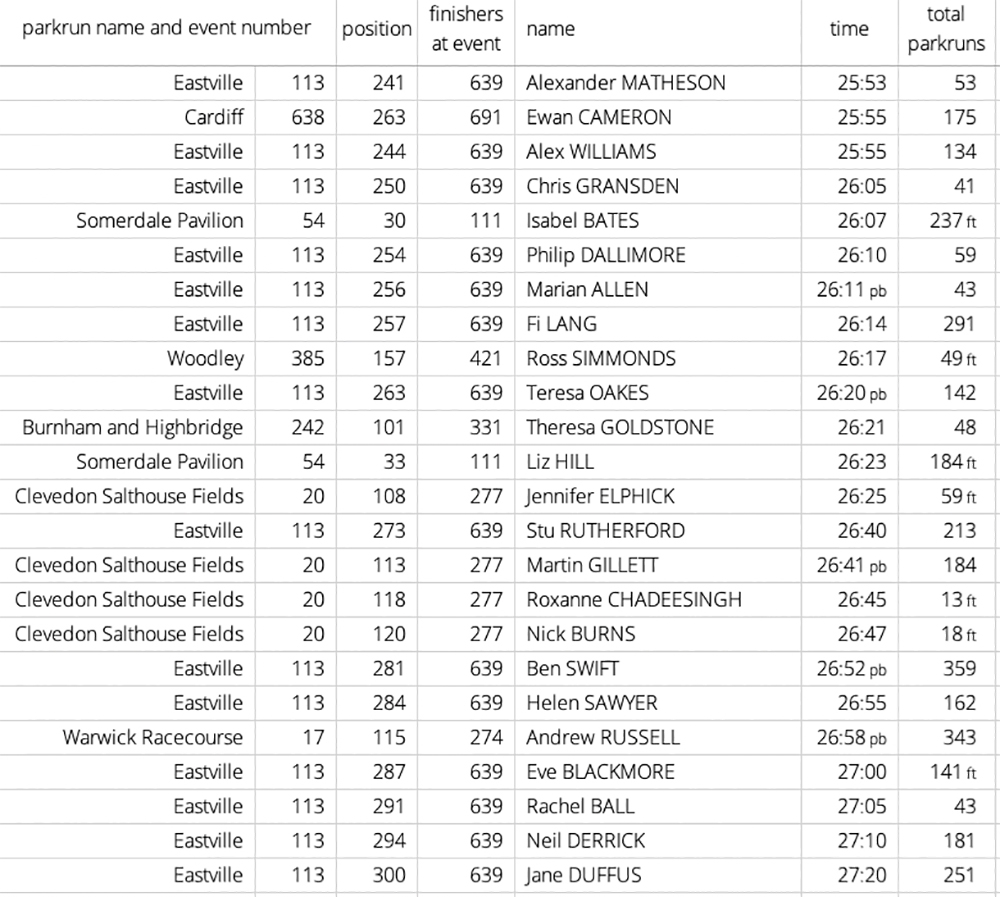 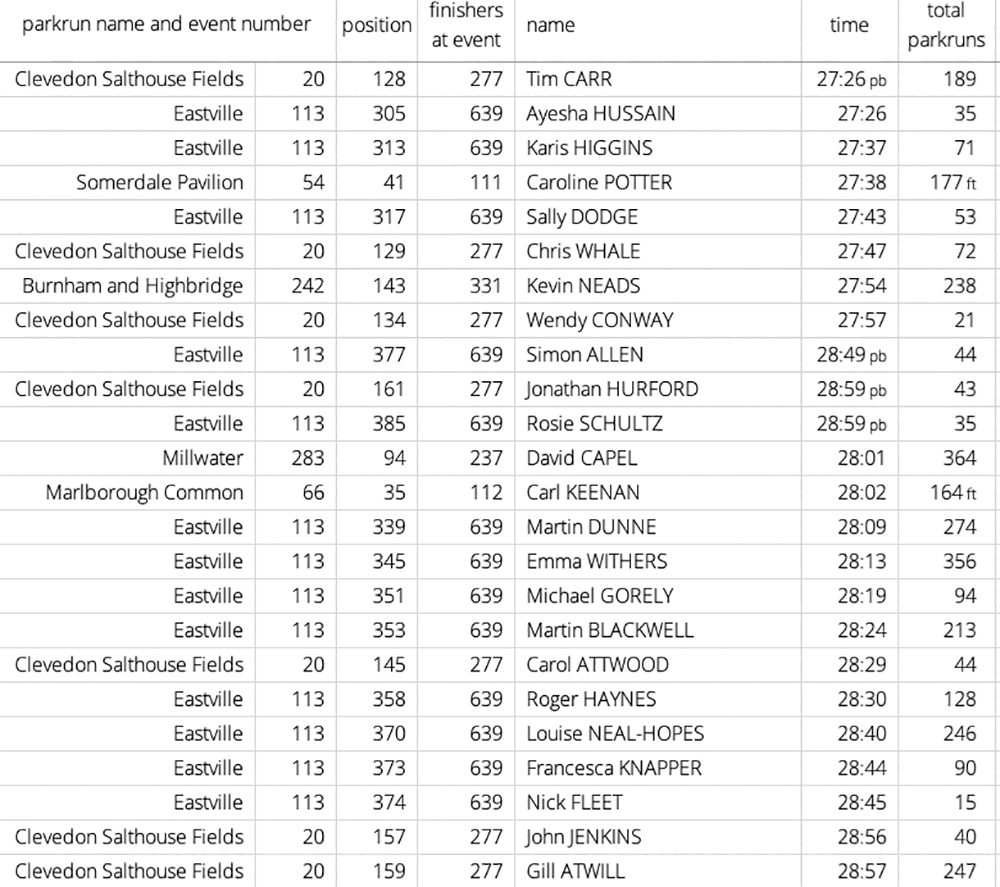 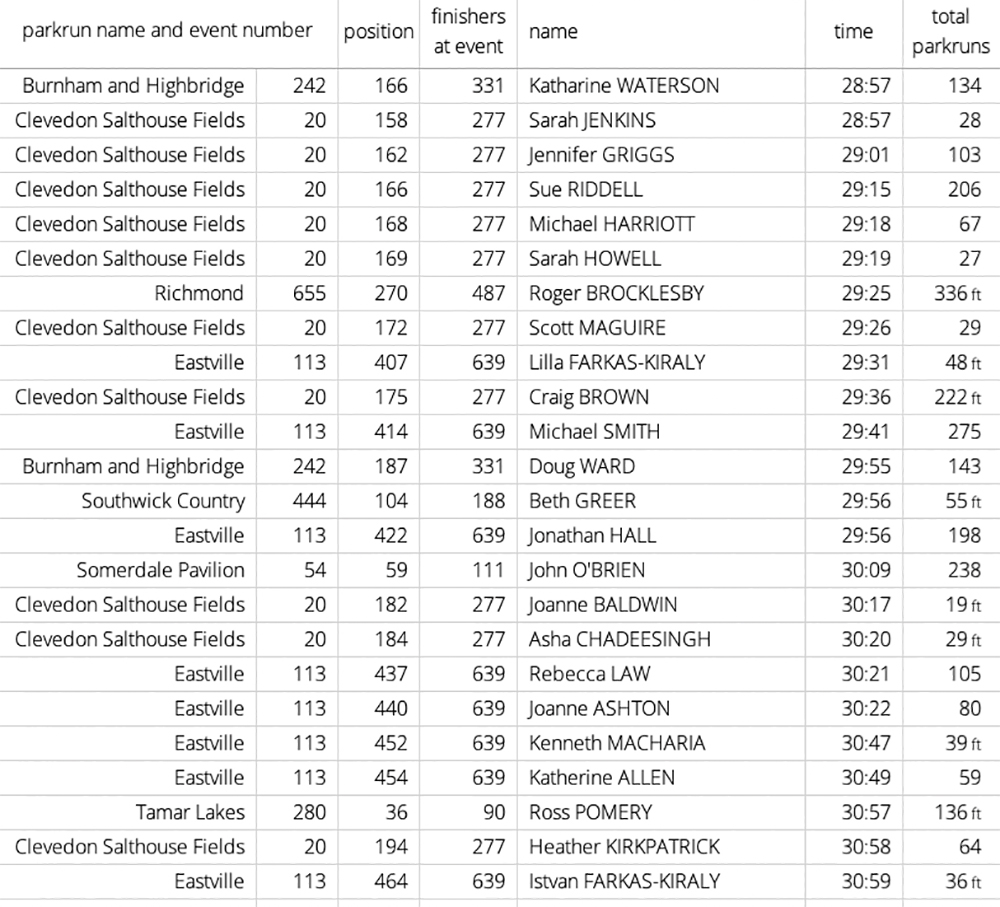 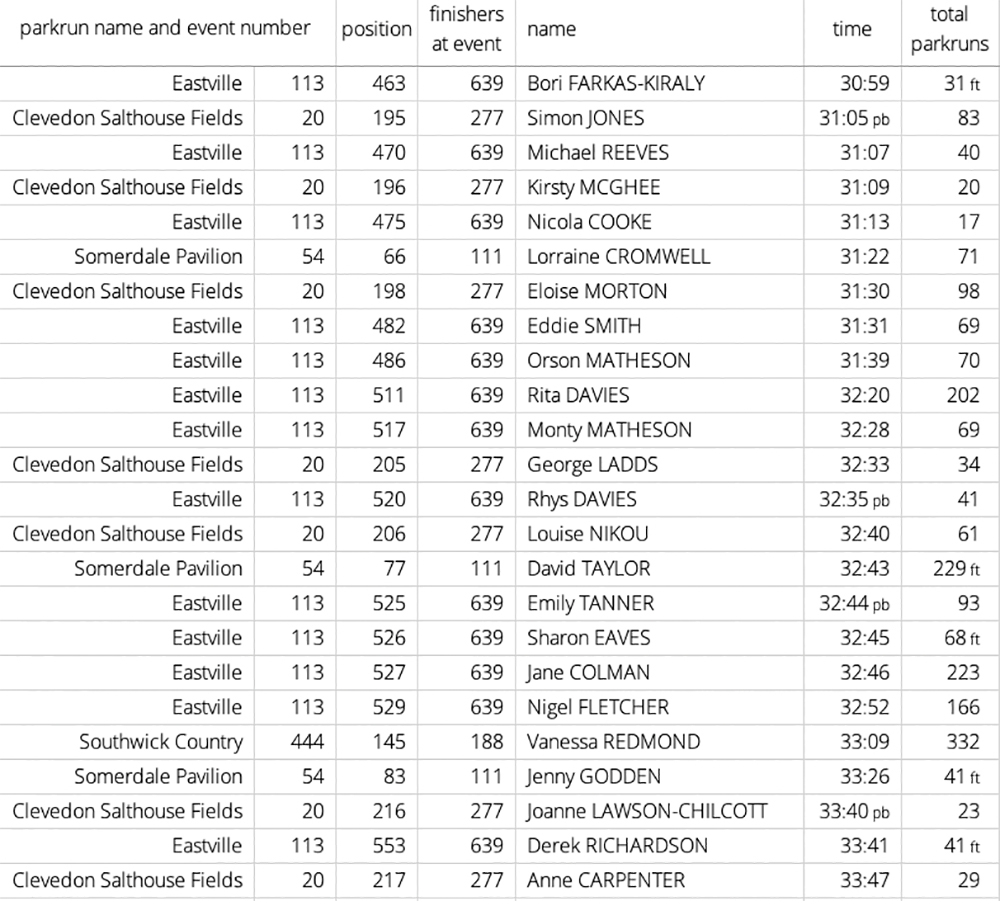 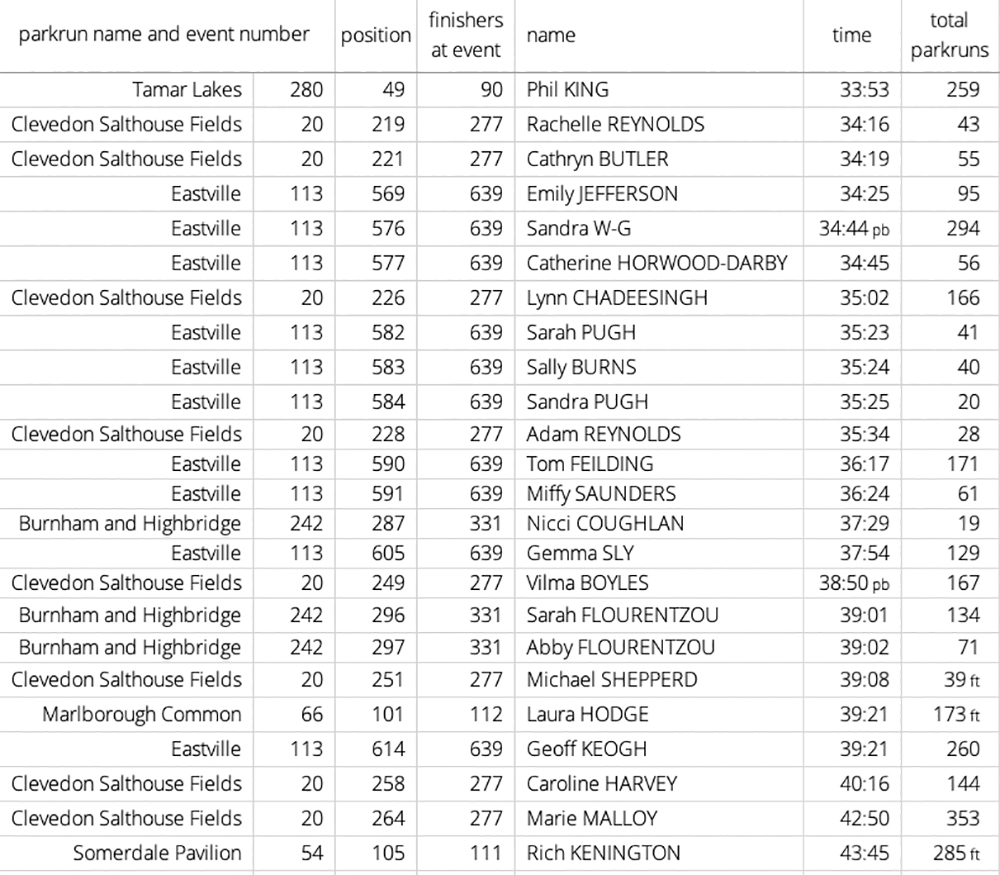