Many thanks to AIDAN for writing this week's run report.  Aidan is one of two people completing their Duke of Edinburgh awards with Banbury parkrun at the moment. He has run the Banbury course 20 times since April last year achieving a speedy PB of 20:45!!

Despite the increase of caution due to the corona virus (and a lack of tourists as a result) over 200 parkrunners took to the course with the same attitude that makes parkrun such an iconic and special event every Saturday morning.

There were some thrills and spills with mud scattered throughout the course (as always) leading to a dramatic finish with a race between a pushchair and a dog. The following result was finalised by a late slip to be victorious by just millimetres, but it was all, of course, taken light-heartedly.

And all the while the run was being completed, the ever-present volunteers cheered on with smiles on their faces and encouragement in their voices which I know, as a runner myself, can help everyone persevere to the finish line.

I would like to say congratulations to all the runners today and to thank all the organisers for allowing me to complete the Duke of Edinburgh with this amazing group, letting me see all the hard work and effort that goes into the organisation of this weekly event.

And now for the stats:

This week 208 people ran, jogged and walked the course, of whom 15 were first timers and 25 recorded new Personal Bests. Representatives of 17 different clubs took part.

Many thanks To AMELIA for this week's extra special International Women's Day run report - Amelia is one of our youngest Banbury parkrunners, but has already completed 4 parkruns (2 at Banbury and 2 junior parkruns) - she has also volunteered in 10 roles including being a Marshal at everyone of our events in 2020 so far!!!

My name is Amelia and I am 5 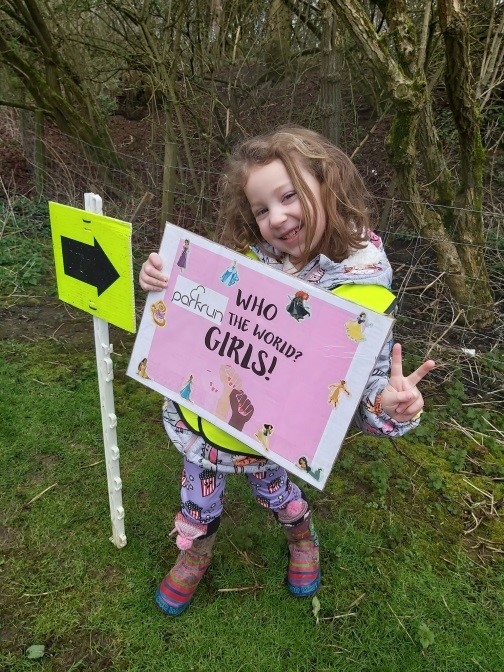 I am normally on my chair somewhere in Spiceball park on a Saturday morning cheering you all on. I’ve had 3 weeks off with the bad weather so I was excited that the park wasn’t so soggy this week and parkrun was back, ready for its International Women’s Day event. 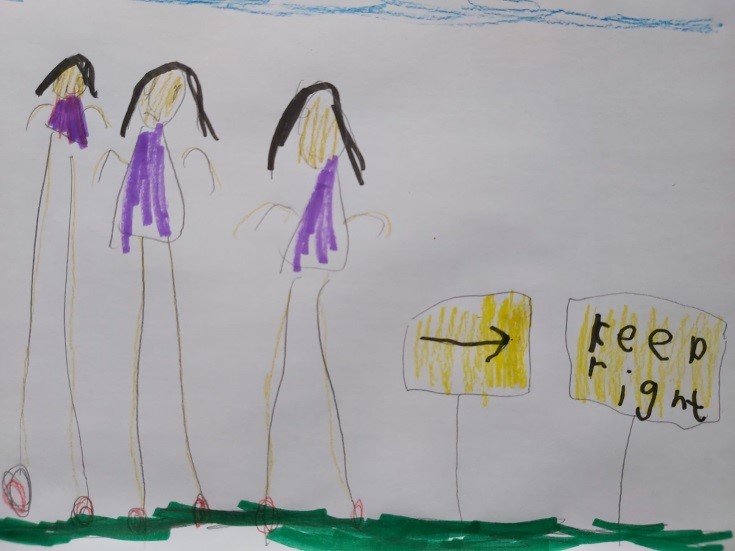 There were 100 girls who took park this week, 16 who managed PBs even in the mud and 11 first timers. The volunteer team included 13 fab ladies to help you all out. The runners looked great in their purple running clothes to celebrate the special event. I loved the special IWD photo sign and enjoyed having my photos taken with some of the hi-viz heroes… 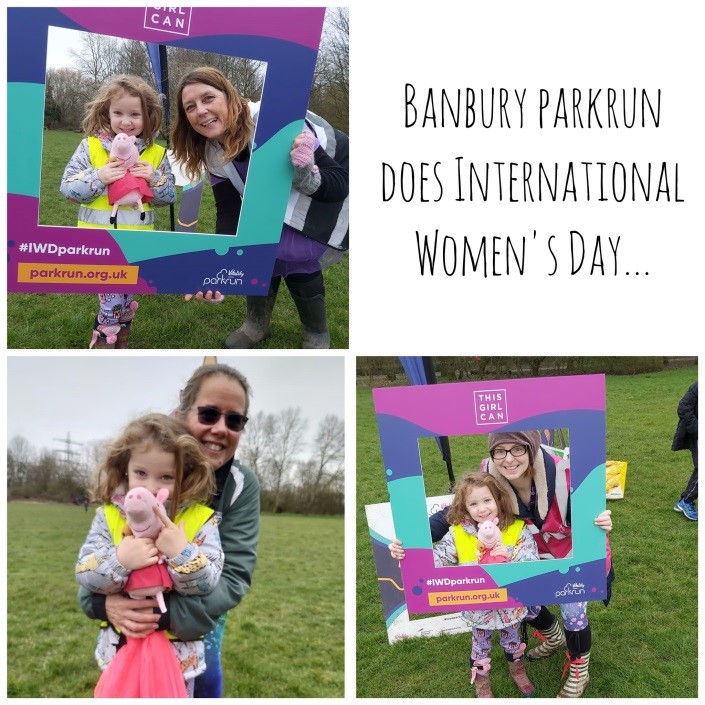 Mummy asked me some questions about parkrun…

Why do you like parkrun?
It’s nice to marshal and I get to cheer all the people on.

What’s the best thing about marshalling?
I get to show everyone my sign and I get lots of high-5s.

Why should girls do parkrun?
Because girls are FANTASTIC and POWERFUL!

And proof below that it’s not just runners that can do a flat lay picture. Volunteers need to do them too to check they have everything they could possibly need to be a Banbury parkrun marshal… 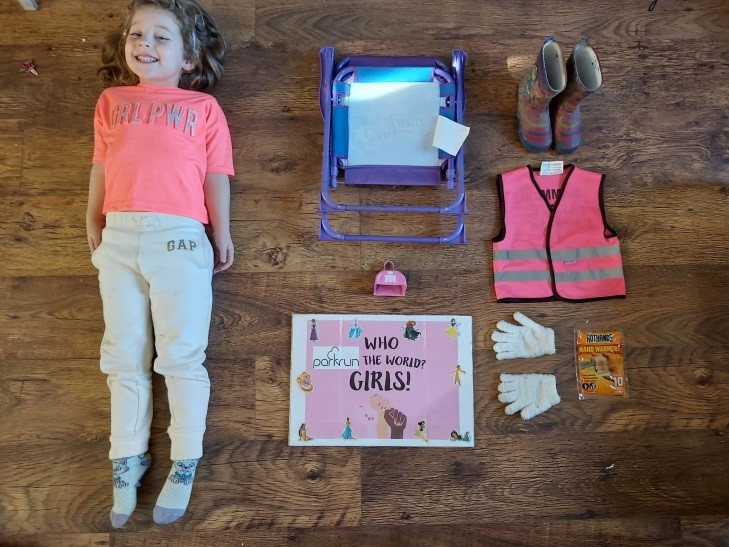 And now for some more stats...

This week 240 people ran, jogged and walked the course, of whom 33 were first timers and 27 recorded new Personal Bests. Representatives of 21 different clubs took part.

Many thanks to Amy RUSSELL for this week's run report.  Amy celebrated her 50th parkrun this week (of which 44 have been at Banbury) - Congratulations!!

It seemed that with Storm Ciara on its way, Banbury runners were making a conscious effort to get their miles in before getting blown away on Sunday. 304 runners, joggers and walkers gathered in the middle field ready to start another Saturday parkrun around the glorious mud-fest of Spiceball Park. Banbury parkrun has been treated to some fabulous fancy dress over the last few weekends. The Crayola crayons were out in force last week and this weekend didn’t disappoint with a camel celebrating her birthday. The mud didn’t stop a fantastic 48 PBs being achieved and we welcomed 39 first timers which included a tourist from York.

After starting parkrun in 2017, I finally got my 50 milestone today and hopefully won’t have long to wait to wear my Club 50 red t-shirt. For anyone new to parkrun in 2020 and aren’t familiar with the various milestones t-shirts, here’s a quick run-down of them…

The 25 volunteer milestone t-shirt leads me on nicely to the people that make parkrun happen. Three cheers for the hi-viz volunteer team out on the course today. Sadly, this week an email plea had to go out asking for help to run this weekend’s event. As Martyn said before the start, if every parkrunner was able to volunteer 2/3 times a year, emails wouldn’t need to be sent asking for last minute help. If you haven’t had a go at volunteering I really would urge you to consider it. Of course it helps the core team out when they have a full roster for the event but it’s actually quite a satisfying thing to do on your Saturday morning with a great bunch of people. Even if you don’t want to miss out on your weekly run, there are a few volunteer roles that you can do and still complete your weekly parkrun and if it’s the milestone t-shirts you are after, 25 times volunteering will get you a t-shirt quicker than the first 50 parkruns!

And now for some stats...

This week 304 people ran, jogged and walked the course, of whom 39 were first timers and 48 recorded new Personal Bests. Representatives of 18 different clubs took part.

On Saturday 7th March, Banbury parkrun is embracing International Women’s Day!To mark the occasion we’d really love to have as many female volunteers as possible on board, so ladies, if you’re free and willing to give up an hour of your morning please send an email to banbury@parkrun.com. Thank you.We do of course completely appreciate that many of you will want to take part so, why not help us celebrate the event further by bringing along a female family member or friend who is yet to partake in a parkrun, be it your Mum, wife, daughter, niece, partner, sister, Grandma, you get the idea! We’d love to welcome them. It goes without saying that we can’t have a special event without a bit of a theme going on, so purple is the suggested colour of the day - get those 25 t-shirts out and anything else you fancy donning too, tiaras, tutus, wellies, anything goes!Come and join the fun! #banburyparkrun#loveparkrun#IWD#IWDparkrun

Many thanks to Michelle LEWIS (aka Purple Crayon!) who wrote this week's run report;  She and her fellow tourist group, brightened the Spiceball park by dressing as Crayons!  Michelle has completed 129 parkruns, but this was her first at Banbury! 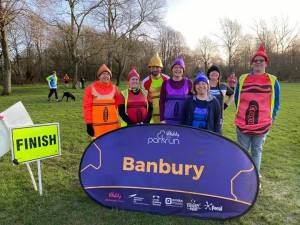 Today the Northampton Crayons visited Banbury’s 273rd parkrun and managed to get a free parking space in one of the car parks mentioned on their course page, which is a good start

From the car park to the start all we could see was grass, trees and plenty of MUD. This is definitely a dirty parkrun from the start, however this did not put us off introducing our colourful selves to Banbury.

The course is three loops, which gave the funnel managers and barcode scanners an opportunity to join part of the route and cheer the 313 parkrunners on this cold, fresh sunny morning.

Martin West lead the field in 20:08 with Les Hutchinson close behind on his muddy heels at 20:27. Many joined the parkrun family and those that got their barcode scanned were Julian Stone, Marianne Fish, William Moore, Hannah Hutchings, Sam Brittain, Karen Mullins-Blyth, Billy McIlroy, Wayne Moore, Amelia Moore, Claire Moore, Robert Butler, Darren McAdam, Cheryl Marshall, Katie Baker, Alfie Uden and Gareth Uden. The parkrunner who has completed the most parkruns amongst us today was Colin David Underhill with 402.

Each week parkrun would not happen without the hi-viz cool army and this week we all owe our thanks to these parkrunners:

Thank you Banbury for a successful parkrun today,

Michelle Lewis aka Purple Crayon
A799534

And now for some more stats:

This week 313 people ran, jogged and walked the course, of whom 41 were first timers and 41 recorded new Personal Bests. Representatives of 22 different clubs took part.