It was a surprise given the horrendous weather conditions that anyone at all turned up for a run but for lots of us it is part of every Saturday morning and so as 9 o clock approached so did the parkrun regulars. This time last year, we had been bathed in hot sunshine constantly for over a month by the start of June. No such luck in 2019.

Some people sheltered under the scanners’ tent and many others headed for the trees to try to keep the worst of the rain off. As nine o’clock neared it was obvious that despite the rain, 12 people had determined this was the week for their first ever parkrun. If you did that and survived then I think you will be coming back again and again.
Finally our Run Director Martyn gathered us for a quick briefing before the off but then we were held in the pen, as a lorry decided to park on the path at the top of the field, meaning a probable collision with 211 sprinting for the first turn across the path. Stuart had a word and common sense reigned and finally we could head off. 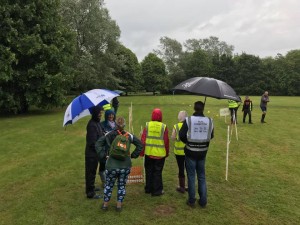 There were several tourists although it appeared that they were all from nearby, elsewhere in Oxfordshire. As we headed off there were less puddles than I had expected but the bigger obstacles were the very wet low-hanging branches. Those more vertically challenged amongst us (me included) ducked and weaved. Our taller runners ran left and right to avoid wet leaves across the face.
The bridge was slippery but not as muddy on the way over as sometimes. There were times when the Paul Simon song came to mind “The nearer my destination the more I’m slip-sliding away” but overall people were coming round the final corner with the usual array of smiles and grimaces, desperate final strides or frantic sprints. Another week, another parkrun….and Paul and Kathy Wilcock marshalled the final runner home in just over an hour and it was time to pack up, contemplate breakfast and off home to wring out those socks or to the café to process the results.

On a day like today it can be hard enough to get up and think I want to run in the rain so massive thanks and respect to the yellow jacketed army of volunteers without whom none of us could enjoy parkrun, who stood and supported, marshaled, timed and scanned and then cleared up behind us all. Thank you.

This week 211 people ran, jogged and walked the course, of whom 26 were first timers and 28 recorded new Personal Bests. Representatives of 15 different clubs took part.
The event was made possible by 27 volunteers: