Run report #260 comes from this week's guest Run Director Nick YOUNG who was visiting from Roosevelt Island parkrun, DC, USA. Nick has run 44 parkruns including twice at Banbury and has volunteered on an amazing 93 separate occasions:

I was so pleased to join my son Sam and grandson Theo to form a three-generational Run Director (RD) team for Banbury’s #260 parkrun. Sam introduced me to parkrun in 2013, and it has proved to be a lasting relationship, and some might say obsession. It looks like Sam has passed on his parkrun love to Theo, who sings joyfully every Saturday “parkrun, parkrun, we love parkrun” no matter what the weather. Theo played his part on Saturday by welcoming all to Banbury parkrun and starting with "Ready, Steady, Go"! 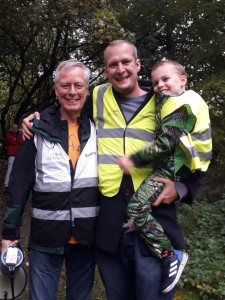 Whichever parkrun you attend, it’s the same welcoming atmosphere. It was great to meet the Banbury core team, depleted as one of their co-Event Directors suffered a broken collarbone as a result of a bike accident. Thanks for your hospitality.

While my home run, Roosevelt Island Washington DC, can get rain, somehow, we seem to avoid it every Saturday morning. However, in Banbury, it rained the previous day, overnight, and continued through Saturday morning, although the parkrun gods seemed to spare us during the critical hour following 9:00 am.

All RDs will recognise the routine. Before setting off, all equipment must be charged, finish tokens checked, and missing tokens replaced and in order. Banbury RDs retrieve the signs, gazebo, and other equipment from the reservoir-based store and trundle them into Spiceball Park for course and finish area setup. While the course was being setup, the start/finish area was being prepared. Sadly, the rain was accompanied by wind and one gust toppled and fatally damaged the gazebo, exposing the scanners to the wind and rain. Despite the rain, the volunteers turned up, were allocated their lanyards indicating marshalling or other duties, and headed off to assume responsibilities. Timers and scanners use the virtual volunteer app and all volunteers were quickly brought up to speed and performed without serious error, even though fingers were cold and wet.

But miserable weather was not the only factor influencing the character of the day. It was Halloween and costumes were the order of the day for the costume-philes among us. Spiceball Park saw witches, dinosaurs, supermen/women, and various animals emerge into the early morning gloom. Also, significantly it was Rugby World Cup semi-final day with England facing the New Zealand All-Blacks at precisely the parkrun start time. Judging by the attendance, many regulars sought to stay in the warm and dry to watch the match and witness the magnificent English performance. Overall, the weather and rugby limited the attendance to 136 runners, way below the average Banbury parkrun attendance, and only 3 runners achieved personal bests, Karolina Szulc, Mollie Davis, and Vince Archers. 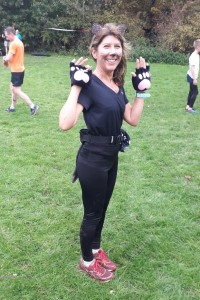 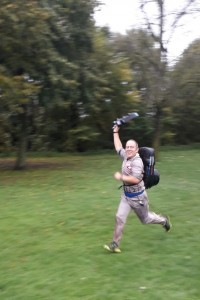 There were many impressive costumes. The dinosaur put up an impressive time, although at the finish line, the costume resembled an exhausted wet blob! 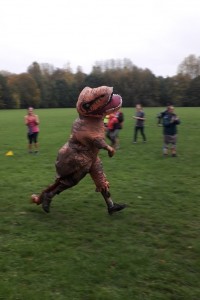 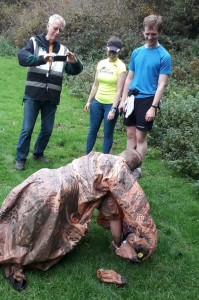 We welcomed one 100 run milestone, Eve Sullivan 100 runs overall, of which 99 have been run at Spiceball Park.

Banbury parkrun has had some difficulties identifying a convenient post-coffee location recently as its regular haunt changed hands. The most recent venue was the Waitrose café. It worked fine, providing a venue to exchange parkrun experiences with core team. 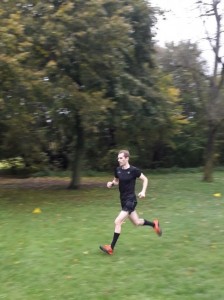 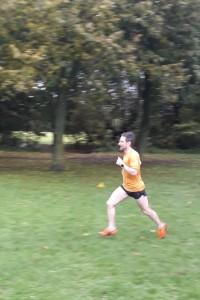 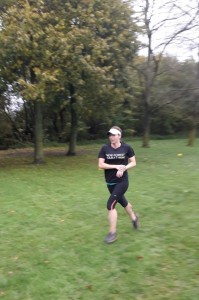 Sam asked how Banbury parkrun differed from my Roosevelt Island home run. In truth, I could not identify any difference at all (apart from the weather). Happily, parkruns everywhere offer the same friendly challenge and creates the same community atmosphere wherever they take place.

The first finishers were:

And now for the other stats...
This week 136 people ran, jogged and walked the course, of whom 13 were first timers. Representatives of 12 different clubs took part.

This week's full results and a complete event history can be found on the Banbury parkrun Results Page.