Unfortunately, no-one volunteered to write this week’s run report, so as it is my responsibility as part of the core team to upload the run reports each week, I thought I would pen a few thoughts instead.

Most people at Banbury parkrun will recognise me, as on most runs in the past 4 years I have completed them with my son Theo, in our faithful (but very dirty) running buggy. In fact, I think on those rare occasions I run without Theo, I think some people don’t recognise me, and from those who do, I always get a few friendly comments to the tune of “Aren’t you missing something”. 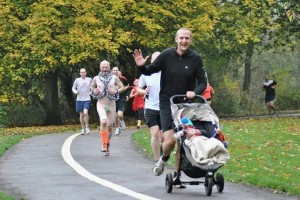 Buggy/Pram/Stroller/Pushchair – call it what you will, either way it is worth getting a buggy designed for running with big wheels and the front one fixed forward, so you don’t have to ‘steer’ the whole time. When I first started running with Theo, shortly before his first birthday, we set off round the autumnal course on Halloween, (chased by a naked costumed runner!) in our standard day to day buggy, it had a mind of its own and if it wasn’t tripping someone up it was getting stuck in a puddle –Michael Dobson noticed us struggling and kindly offered us his running buggy and at only £20 I jumped at the chance. That was it! Theo came on every dry parkrun day from then on.

Running with a buggy adds an extra challenge to parkrun (and about 2 minutes to my time), not least the ever-increasing weight you push round each week. Other stroller enthusiasts will inform you of the surprising loss of power runners experience when you can’t use both arms, and I have had discussions into the best technique to push –

There are risks with buggy driving too – Don’t be tempted to high 5 people on the bridge, on more than one occasion I have come close to catapulting poor Theo into the Cherwell after a failed flap at oncoming raised hand.

This week after I struggled to get the now rather tired buggy (splattered with 4 years of Spiceball mud, with ripped undercarriage and flat tyre that if I pump just before we set off will hold up until the end) out of the car and dragged it over the canal bridge, I thought “I’ll be glad when I don’t have to do this anymore”.

As Theo gets older (he is now five) he is beginning to be motivated to run further, starting with gusto but as yet has not quite managed the full 5km, and climbing in the buggy when his legs get tired. But before too much longer I am sure he will get there and the days of shoehorning him into our trusted three wheeled friend will be over and it’ll either gather rust in my shed or hopefully be passed on to another keen running mum or dad. 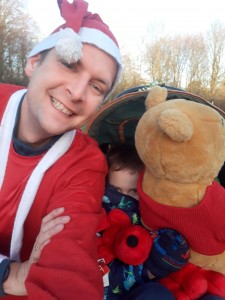 So, as I puffed my way through the muddy puddles this week (there is no opportunity to go around them when pushing), I felt a little remorse at the fact that my parkruns with Theo will shortly be changing. I shall miss the constant encouragement of “come on dad overtake – go faster” and the joy of making machine gun noises while my co-pilot makes his arms into wings to sweep around the hairpin bends.

This week Banbury parkrun did not lend itself well to the buggy runner, we started at the front to try and get clear of most runners (and Theo didn’t fancy running in all that mud), but it was so slippy on the first corner we struggled to get clear, the field then strung out and we ploughed through the muddy back straight – an extra dose of muddy spray covering my legs from the wheels. Over the bridge and I looked like Bambi on ice, only staying on my feet due to being able to hang on to Theo and the buggy, but then I almost fell again, when we veered slightly off course and hit deep mud causing a pile up of runners as we came to an almost immediate stop. My lack of running in October really started to take effect on the third lap and I was very grateful to two fellow parkrunners who helped push us up the incline off the bridge. Finally, to the finish and into what now resembled a brown swimming pool to get our barcode scanned – a quick check of the watch and we are 3 minutes off the buggy pb!

Thanks to all the volunteers this week without whom parkrun could not exist. And congratulations to 19 parkrunners who achieved PBs.  Finally a special mention to the 4 who achieved Milestone runs: Jon Poulton (100), Nick De Pennington (50), Emmanuel Heraud (150) and Verity West (50).

If you would like to try your hand at writing a run report or doing any of the other volunteering roles please contact our friendly volunteer coordinator Sera on banburyhelpers@parkrun.com
Thanks

And now for the stats:

This week 244 people ran, jogged and walked the course, of whom 15 were first timers and 19 recorded new Personal Bests. Representatives of 18 different clubs took part.