Until last week when visiting my parents 20 miles south of Paris, I hadn’t run a full 5k since the last Banbury Parkrun…  In their village, however, they have what’s called a “health-track” which goes through fields and woods and I worked out a 5k loop which I ran 4 mornings last week.

It is a shame that my old Garmin no longer synchs with the app; hence I can’t give you the evidence, I am afraid. Here is my run report instead.

It felt very bizarre to get dressed and ready to run in a house from which I normally only depart to walk to the village boulangerie. 8:45am - ready to go! Turn right outside the house and take first left. Go down the little country street, stone bridge over the river. Leave the street for a country lane, through woods over a wooden bridge, into an open field where the Town Hall have installed a few bits of outdoor gym equipment, like beside the canal at Banbury. I met a few fairly elderly women exercising and walking around the field and a few dog owners – the latter definitely felt that they had priority on the territory! 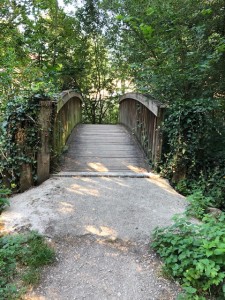 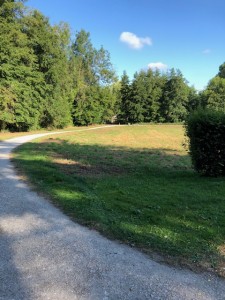 The second part of the run is shady, going over two wooden bridges - a 5K just isn’t the same without a wooden bridge! Not as wobbly as the one we know, but there were not 400 people with me either. Ducks and geese acted as marshals along the river. Leaving the woods for a long stretch along the trainline to get to a set of nice houses and back, over the railway line and back home. Stretching was performed in my parent’s back-garden watched over by their beautiful geraniums. 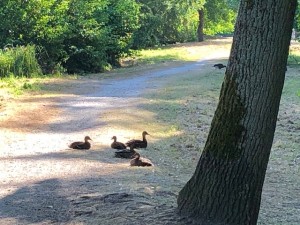 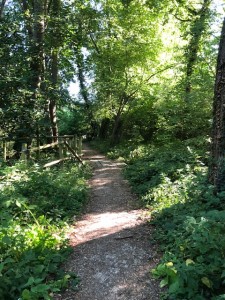 Even though they attended Banbury Parkrun once and they know that we run regularly, my parents were actually impressed; I don’t think they took me seriously when I said I would run during the week and certainly not 4 days in a row.

For the occasions, I was wearing the local Ligue Contre le Cancer t-shirt sponsored by my Mum. I was also with the same music track as in Banbury, so you were all on my mind throughout my run.