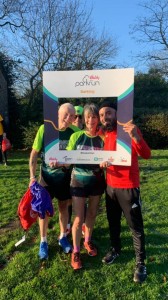 Another great turn-out at Barking parkrun this week, with 158 people running, jogging or walking the course, including 24 first timers, nine of whom were parkrun newcomers. We’ve now had over 4,000 finishers at Barking! A fantastic 20 people recorded new Personal Bests.

There wouldn’t be parkrun without volunteers – kind people who often give up their own run (or make good use of their time if injured) to enable other to enjoy parkrun. Today’s event was made possible by 11 volunteers:

The first three female finishers were:

Today's full results and a complete event history can be found on the Barking parkrun Results Page.