This week’s Barry Island parkrun saw the fifth highest attendance of the 104 previous events with 176 runners taking part, 53 of whom were taking part for the first time and an impressive 34 runners get a new Personal Best time.

As well as the regular runners, a group of 27 visitors from Pencoed Panthers made the trip to the seaside for their first attempt at running the two lap, 5km course.

With running getting plenty of media coverage in the past 2 weeks, there was also a cheer for the London Marathoners taking part, including Georgina Lloyd from BBC’s Mind Over Marathon program. 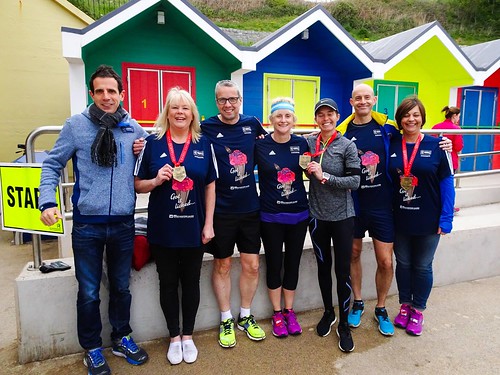 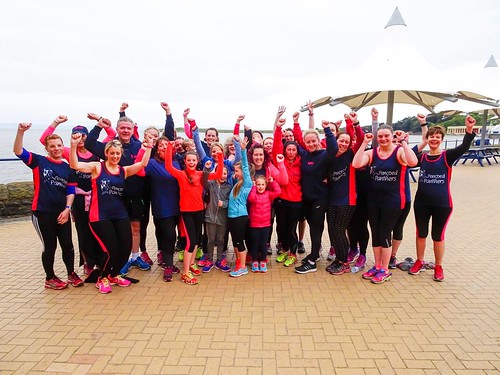 The first finisher this week for the men was Jeff Cox of Les Croupiers RC crossing the line in 18:41 and setting a new Personal Best in the process. An unknown runner was second with Phil Cross taking third place in 19:49
For the ladies, it was Ruth Owens of Penarth & Dinas Runners in first place and a new Personal Best time of 22:25 followed by Leanne Hockey of White Rock Runners in 23:50 with Kirsty Wilson in third place in a time of 24:05.

First for the ladies, Ruth Owens. Photo by Dave Shields

parkrun celebrates the achievements of runners by rewarding them at certain Milestones with a commemorative running shirt. This week there were Milestones for Beverly Ooss, Paul Buckle and Harriet Kehl, all running their 50th parkrun.
Also, Co-Event Director Lyn Evans was volunteering for the 100th time.

Bev Ooss on her way to completing her 50th parkrun. Photo by Kevin Moore

This coming Saturday, May 6th sees the 2nd Anniversary of Barry Island parkrun.
Organisers are hoping for a bumper turnout to make the event a memorable one. There is also a hint of a couple of celebrity runners paying a visit.
As part of the celebrations for the 2nd Anniversary, a short video featuring all the messages that the runners were asked to write at the 100th event. This can be found on Barry Island parkrun’s Facebook Page, or by following this link.
As is the custom whenever there’s a celebration involving runners, cake will feature heavily and any cake donations will be gratefully received.

Barry Island parkrun is a totally free timed run and takes place every Saturday at 9am under the Eastern Shelter on the promenade at Barry Island and is only made possible thanks to the volunteers who give up their time each week to ensure the event takes place safely. This week there were 25 volunteers, including one from the visiting Pencoed Pathers.
Anyone wishing to take part should first register with parkrun at parkrun.com/register, print the personal barcode and bring it along on a Saturday morning.
Anyone who would like to help out should also register with parkrun and get in touch at barryislandhelpers@parkrun.com
You don’t have to be a runner to help out and only takes a maximum of 2hrs of your time on a Saturday morning.