This week we received a message from a parkrunner which read: “I did my first ever sub 30 mins 5k today. Really pleased with myself. Out of interest for other runners I ran 3 min run / 1 min walk for the entire 5 km. Thanks to those that asked me 'you ok?' as I dropped out of run to walk - I appreciate the concern but it's all planned! For those of you who haven't tried run/walk it's actually a great way to get your 5k speed up while reducing injury especially for those of us age 45+ Highly recommend it. Looking forward to seeing where my age grade has taken me this week.” This led me to reflect that one of the great things about parkrun is that it is inclusive to everyone, whatever their fitness level, age or goal.

So what’s your goal?

Because parkrun is a timed run we all have Personal Best time and whatever your PB, the simple goal of improving on this time is what gets many of us out of bed on a Saturday morning. This week 76 runners recorded a new PB, congratulations to them all on setting themselves a new goal to strive towards.

There is also, as our correspondent above mentions, the goal of increasing our age grade scores (one which appeals to me more and more as the next age bracket draws ever nearer). Age Grading takes your time and uses the world record time for your sex and age group to produce a score (a percentage). This score allows you to compare your personal performance against other people's, even though they might be a different age and a different sex to you - the higher the score the better the performance.

Another parkrun goal is to gain entry into one of the milestone clubs and become the proud wearer of a coveted parkrun T-shirt. Shirts are awarded to juniors who complete 10 runs and anyone who completes 50, 100, 250 or 500 runs, as well as to volunteers who help on 25 separate occasions.

This week Ann McKenzie-Ayling, Iain Howard, Matthew Newberry, Neel Chandrasekar (pictured above with Mum, Roshni & Dad, Chandri), Ricky Chan, Sarah Day and Simon Brown joined the 50 club, with Ann, Neel and Ricky also achieving PBs; Steve McGeown joined the 100 club and George Hedderly joined the Volunteer Club. Congratulations to you all and we look forward to seeing you in your new T-shirts very soon for our monthly photo. For our faster runners there is the goal of being one of the first three finishers and this week’s placings are

For others there is the lure of the annual points completion, which runs from the anniversary of each individual parkrun.

As it is Basingstoke’s anniversary next week, we will be celebrating the runners who have achieved the most points over the year at our annual prize giving, remember to arrive at Crabtree before 8.40 to join in the celebrations.

This year’s leaders in the points competitions are:

For some the goal may simply be to be in the right place at 9.00 on a Saturday morning and unfortunately two runners, May Hart & Jo White-Mcilroy, didn’t manage to achieve that this week.  They turned up at Crabtree a week early, but undaunted they ran the parkrun route anyway. 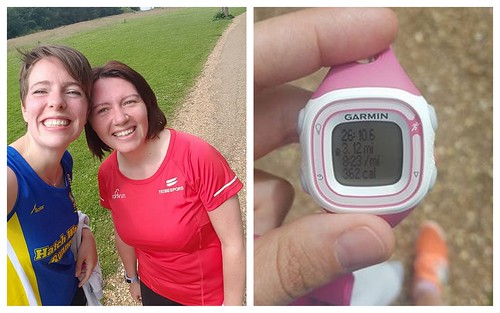 They’re looking forward to the rest of us joining them there next week and the following three as, due to other events in Memorial Park, the parkruns on 2nd, 9th, 16th & 23rd July will be held at Crabtree.

If the thought of running up Crabtree hill 8 times in July is too much for you, why not try a volunteer role? The volunteer team is always happy to have new recruits and you won’t be asked to do anything you’re not comfortable with. Take a look at http://www.parkrun.org.uk/basingstoke/futureroster/ to see what roles are available and email basingstokehelpers@parkrun.com when you’ve decided what you’d like to do.

Finally, numbers: This week there were 397 runners, of whom 27 were first timers (19 running their first parkrun and 8 their first Basingstoke parkrun. Representatives of 15 different athletics clubs took part.

Basingstoke parkrun started on 5th July 2008, and since then 8,980 different runners, including participants from 373 athletics clubs, have completed 95,320 runs covering a total distance of 476,600 km, and there have been 16,100 new Personal Bests.