491 runners completed this week’s parkrun, on a beautiful, bright, sunny and warmish October morning. 15 were new to parkrun and another 15 were visiting us from other parkruns around the country; welcome to you all and I hope you enjoyed your run and will return again soon. A tremendous 70 people got themselves a shiny new PB; congratulations to you all. Our milestone runners this week were Pietro Ferizolla doing his 10th junior run and Rhiannon Perryment doing her 50th run. An unofficial 150 milestone goes to Emma Roberts. Also Annie Winfield-Shearer volunteered at her 25th event. Congratulations to each one of you also!

My title for today’s report comes from listening to a Dad encouraging his lad to complete the whole 5k this morning (albeit part of his encouragement didn’t sit well with me - getting the lad to cut the corner at the lamp post)! This to me was wrong in so many ways, but it was that which alerted me to what he was doing i.e. giving encouragement, which I loved! As they continued around the course I could tell that “Dad” was making the run/walk fun for the lad; words like “We’ll just run to the lady in grey, and then we can take a break.” and similar words were lovely to hear. Just last week a lady said to a friend of mine, “Can I keep running with you? I don’t want to walk at all this week.” This was encouragement for both parties and indeed they both ran all the way round together. Think about how you can encourage others at parkrun; your friends, family, other people who run at a similar time to you each week (who until you went to parkrun, you had never even met)! My own encouragement for getting a little faster, comes from trying to catch Ken Thake each week, and in turn his encouragement to run faster comes from trying to stay ahead of me (he succeeds most weeks)!

Also in the wider world, whilst you may never be fast enough to beat what was Paula Radcliffe’s 16 year old world record; Brigid Kosgei was encouraged by her friends, family, coach and did just that. How her times apply to running 5k at a parkrun has been worked out by our own statistician Matt Pillinger. Here are his findings:

After Eliud Kipchoge ran a World’s best* marathon time last Saturday, Brigid Kosgei broke the Women’s World Record, which was set by Paula Radcliffe in 2003, finishing in 2:14:04. So, following on from last week’s 1:59:40 in parkrun terms, here is 2:14:04 on the same basis
Brigid averaged 3:11 per KM, so 15:53 for a parkrun, but running 8.4 parkruns back to back
Only 2 parkruns in Britain have a faster women’s course record (Cardiff, Charlotte Arter – 15:50 & Long Eaton, Jessica Piasecki – 15:53)
The 8.4 fastest women’s UK parkrun PB’s total 2:15:00 – so those 9 speedy women running back to back would have been beaten by 1 person!
Last week’s Basingstoke first female finisher was Lisa Hale in 20:50, a hypothetical Brigid ghost running last Saturday would have finished when Lisa had covered 3.8km – so just past the playground at the top of the park.

*The difference between a World best and a World record is that a World record is set under conditions that don’t qualify it as a World record – so for Eliud Kipchoge he ‘broke the rules’ as follows – it wasn’t in an official race, the pacers were rotating and fluids were provided from moving bikes rather than him taking them from tables. Interesting, Paula’s 2003 WR was revised to a World best in 2007, as Paula ran with male pacemakers, which were banned for Women’s WR attempts subsequently – which is why in big marathons the elite women set off before the elite men – to prevent the men giving them a deliberate or inadvertent tow.

Hopefully the Basingstoke leaderboard below will encourage you to continue with your attendance at parkrun and the benefits it provides.

Here is the latest update on the Basingstoke parkrun leaderboard. These 25 parkrunners have a
combined total of 10,789 runs completed at many different events across the UK and overseas. 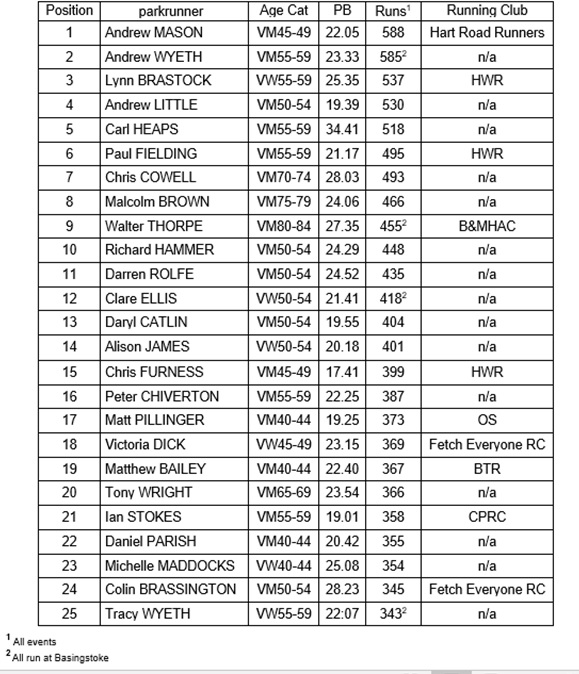 And big, big thanks go to all the volunteers, today and every week from the core team who give up many hours each week to make sure that you have a safe, fun, timed run and those who give up a run to man the equipment and marshal points. Have you volunteered yet? You’ll be encouraged to know that most, if not all, volunteers love the time they spend manning the timers, scanners, handing out tokens, keeping the finish funnel moving and encouraging the runners as they marshal the corners - and helping to set out and collect in the markers means you can still run! Please contact basingstokehelpers@parkrun.com to get your name down on the volunteer list; you’ll not regret it. If you volunteer once every 17 runs, we may never have to put a call out for volunteers at the last minute ever again!

And lastly a mention to the people that finished first today Tom Harding in 17:24 followed by Kieran Ruffle in 18:09 and Hari Bakham in 18:41. Alison James was first lady in 22:09 with Anna Melville with a PB of 23:06 and Melanie Todd in 24:24 following. The last people over the line were the tail walkers. Oh! Another volunteer opportunity right there…