This week in November brings the theme of Remembering. There’s “Remember remember the 5th of November” reminding us of the Gunpowder Plot in 1605. And 11th November is Remembrance Day, where we remember those who have lost their lives or suffered in wars past and present, and at 11am poppy wreaths are laid at the War Memorials in the towns and villages of the UK – including Basingstoke at our own War Memorial Park.

Today, Sandra Powell was remembering too. In July 2017 Sandra came along to Basingstoke parkrun for the first time, and since then she has completed 103 parkruns. Sandra is one of our regular visually impaired parkrunners and if you speak to her you’ll find that she looks forward very much to her weekly trips around War Memorial Park – having guided her around the park a number of times she gets so many encouraging shouts as people pass her, and we have a good old chin wag as we go. 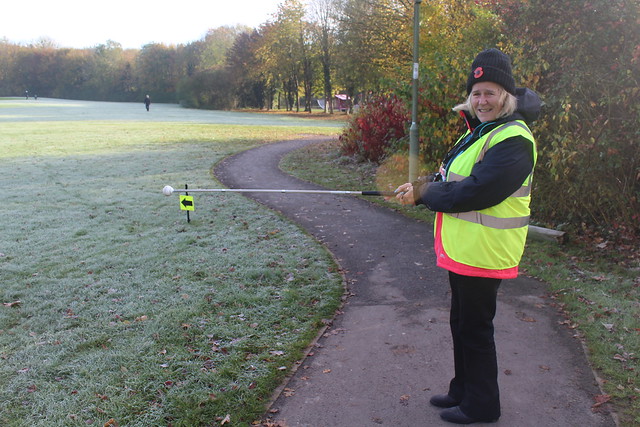 Sandra using her cane to point the way!

Sandra has volunteered at parkrun before as well – she’s been a Tail Walker while being guided around the course. She wanted to have a go at a different volunteer role having reached her 100 parkruns, so Sandra and I were marshalling today. If you missed us, we were at the point below the sports pavilion where you turn sharp left onto the grass and head toward the finish. We were doing our best to encourage you all as you completed your parkrun, on what turned out to be a cold and frosty morning when we arrived at the park, but then the sun came out and it turned into a lovely November day, rather more pleasant for marshalling than I guess it was last weekend in the wind and rain. Thank you to all the parkrunners who showed their appreciation as they passed us today. 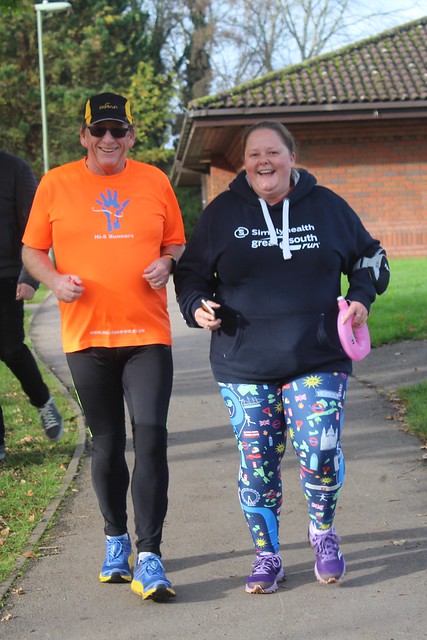 I know we mention the importance of volunteering every week at Basingstoke parkrun. But why should I volunteer at our parkrun? Here are some suggestions: 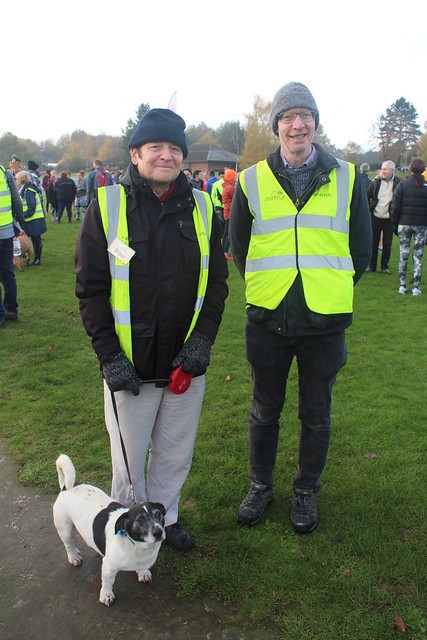 I know that for some people volunteering can be difficult – you may have commitments before or after parkrun that make it tricky to do. Or you may be worried about getting something wrong. But please consider – just as a parkrun needs its parkrunners (otherwise all of the marshals would be standing around cheering along other walkers in the park, which would be a bit weird) it also needs volunteers every week to safely operate it. And if Sandra who is visually impaired can volunteer and enjoy it immensely, or our teenage DofE volunteers, or even children (with supervision), or older people, then so can just about anyone else. So don't let worrying about things going wrong put you off. Please email basingstoke@parkrun.com after taking a look at where there might be gaps in the roster (https://www.parkrun.org.uk/basingstoke/futureroster/) or talk to the Run Director at any parkrun if you want to know more. 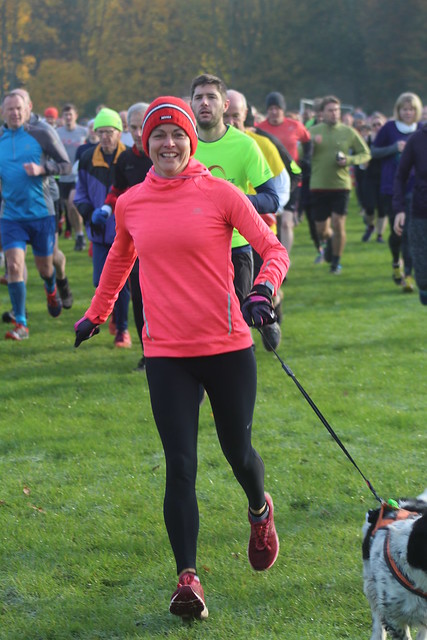 So what happened at today’s parkrun?

570 people completed today’s parkrun. After the dips in attendance of the last couple of weeks due to the Rugby World Cup matches and especially last week’s abysmal weather, that was a huge boost (more than doubling last week’s attendees). Well done if you were one of the 56 attendees who managed a PB – special kudos to Elizabeth Hopkins doing her 222nd parkrun and 45th at Basingstoke – she got her 12th PB at Basingstoke this year alone; and to Jill Hazelton who was completing her 105th parkrun (39th at Basingstoke) who managed a PB here for the first time in almost five years. 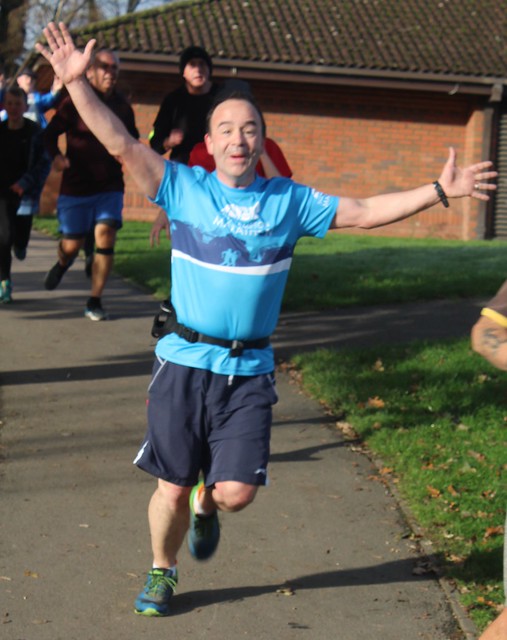 Fifteen people did their very first parkrun today – a huge welcome to you if you were one of them, and we hope you will be back soon to try to get a PB next time. And welcome also to the twenty first time visitors to Basingstoke – we hope you enjoyed parkrunning with us and that you will come back to visit very soon. 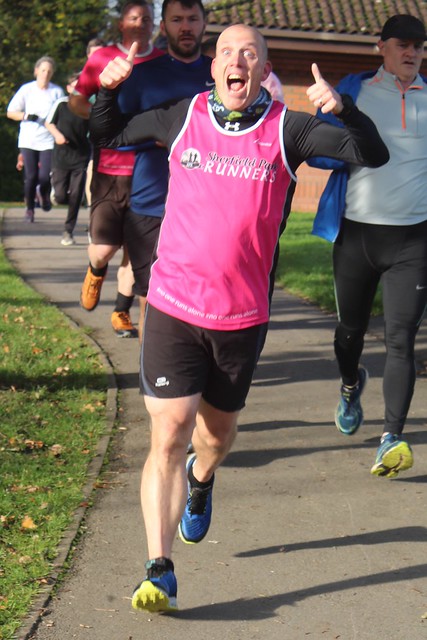 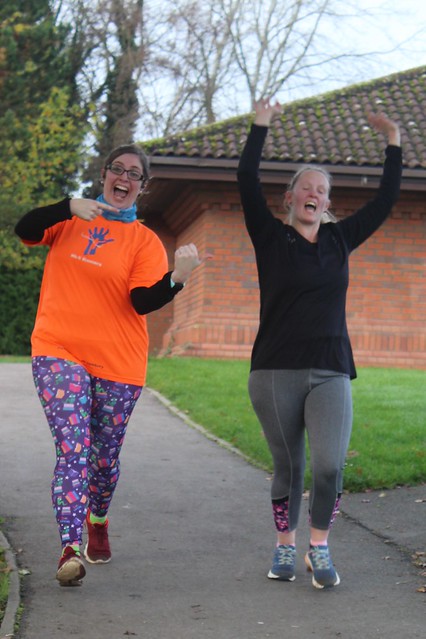 I’ve asked this question to Sandra before as we’ve gone around the park. The main thing she described was the liberation of being able to do something that most of us take for granted.
However if you want to find out, you could do what today’s Run Director Paul Moulton did a few weeks back. Having done this he wrote a report on what he had done with his running club Hatch Warren Runners, and with his permission I have included an edited version here. 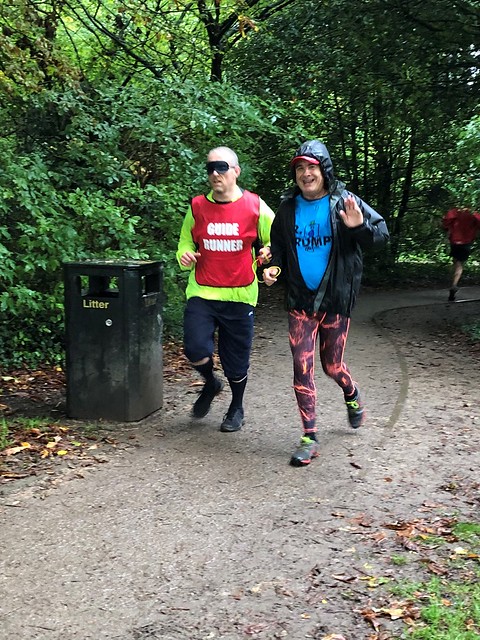 “On the weekend 12th October at Basingstoke parkrun I had the opportunity to experience what it was like to be a guide runner for a visually Impaired runner. I also got to experience what it might be like to be a visually Impaired runner being guided. Talking to Peter Chiverton prior to the run, he mentioned that the Basingstoke Guide Running Group that he is a member of, had brought along eye masks and tethers available for anyone who wanted to try out guiding. Another parkrunner, Dave Barber, had the same thought so we buddied up. I started off wearing the mask with Dave guiding. We assembled at the back of the pack and then we were off. Instantly a number of unsettling feelings become apparent. Without the benefit of sight, balance is compromised and it takes a while to get used to. Also, there is the uncertainty that, even though you have a guide, you are going to run into a tree or another runner and that it will hurt. That feeling didn’t leave me until we swapped after the first lap. I have seen VI runners just holding the strap while running but I found more comfort in being able to hold on to Steve’s forearm. It allowed him to steer me more accurately and gave me some balance feedback. Another challenge is the voices of other parkrunners. Suddenly hearing someone talk when you don’t know they are there makes you think you are about to run into them, or them into you. Constant commentary from the guide is needed to anticipate everything. After swapping so that I was now guiding, it quickly becomes apparent how much information needs to be relayed to the VI parkrunner in order for them to feel comfortable. Transitions from path to grass, tree roots, puddles, corners, other runners in proximity and most importantly the finish – time to stop running!! I found it quite informative to see this from both sides and would certainly consider becoming a VI guide. If anyone is interested in doing what I did, there is an eye mask and tether kept with the parkrun hi-vis. Why not find a friend and have a go? If nothing else, you will have a new perspective on what VI runners experience every time they run.”

So that's it for today. But Remember - there is a new parkrun next Saturday for you to be part of!