In case you hadn't noticed it was International Womens’ Day this Sunday 8th March, and it got me thinking about the female runners who have achieved staggering feats over the years. We've seen pace setters and record breakers - incredible athletes representing their country on the international stage. Who can forget performances by Zola Budd, Sally Gunnell, Kelly Holmes, Paula Radcliffe, and more recently Dina Asher-Smith? And then there are the women attempting - and winning - mind blowing endurance events, like Jasmin Paris – winner of the 268-mile Montane Spine race - and Nicky Spinks who has taken on the Bob Graham, Paddy Buckley and Ramsay Rounds – completing each of them not just once but twice in one go!! (take a look online to understand how incredible that is!)

Elite and extreme performances aside, for many people (myself included at times!) getting out of bed regularly on a Saturday morning to run, jog or walk parkrun is a huge achievement in itself! Whether at the front, firmly in the middle, or bringing up the rear; whether running with a buggy, in fancy dress, or making sure the baby gets the parkrun bug early (10 weeks before the expected arrival date!), parkrun really is for everyone. After all, as iconic runner Kathrine Switzer once said: “All you need is the courage to believe in yourself and put one foot in front of the other.”

We don't have to look too far to find our own inspirational parkrunners at Basingstoke, so I thought I'd ask some of them about what and who have motivated or inspired them to run.

Lynn Brastock was one of the 11 women who took part in the first ever Basingstoke parkrun on 5th July 2008 - and is still whipping round in similar times! Lynn's motivation to run was due to her father's osteoporosis – a good plan since running is a great way to maintain bone density. 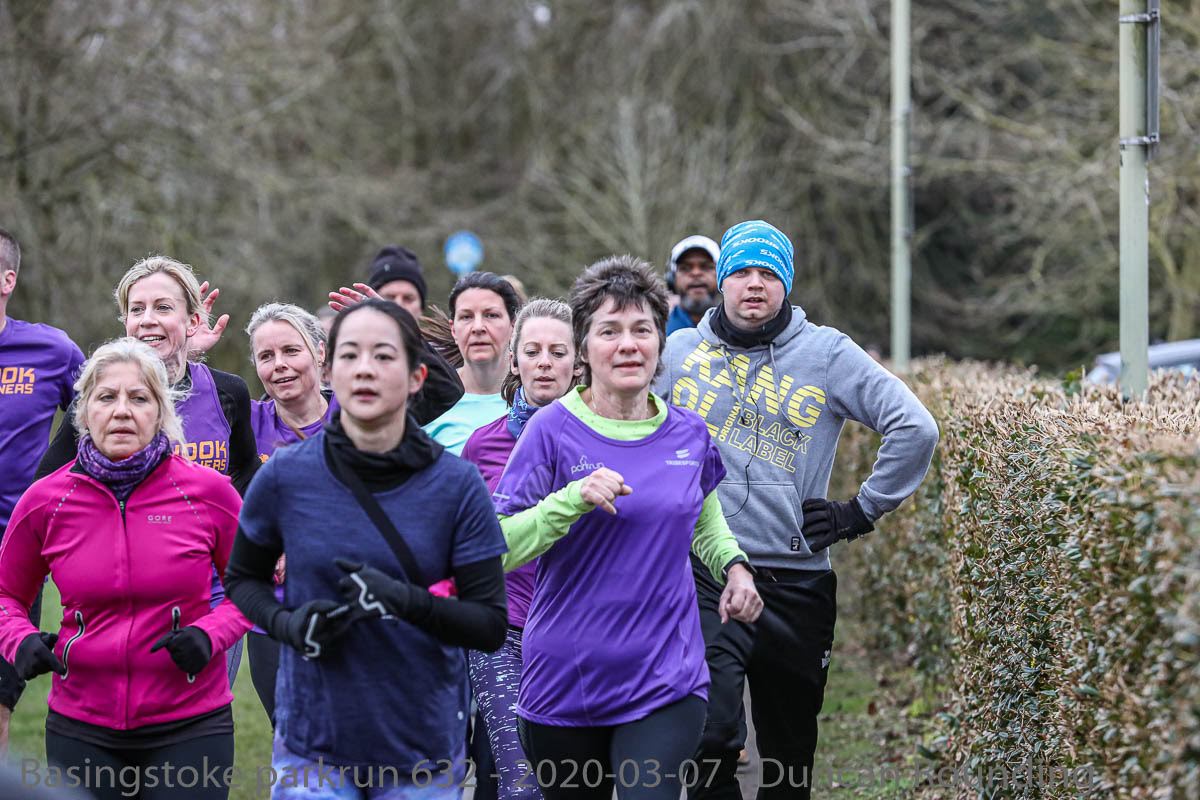 Meanwhile parkrun regular Tracy Wyeth - on course to complete her 400th parkrun later this year - enjoys the competition and sense of achievement as she finds herself regularly 1st in her age group. 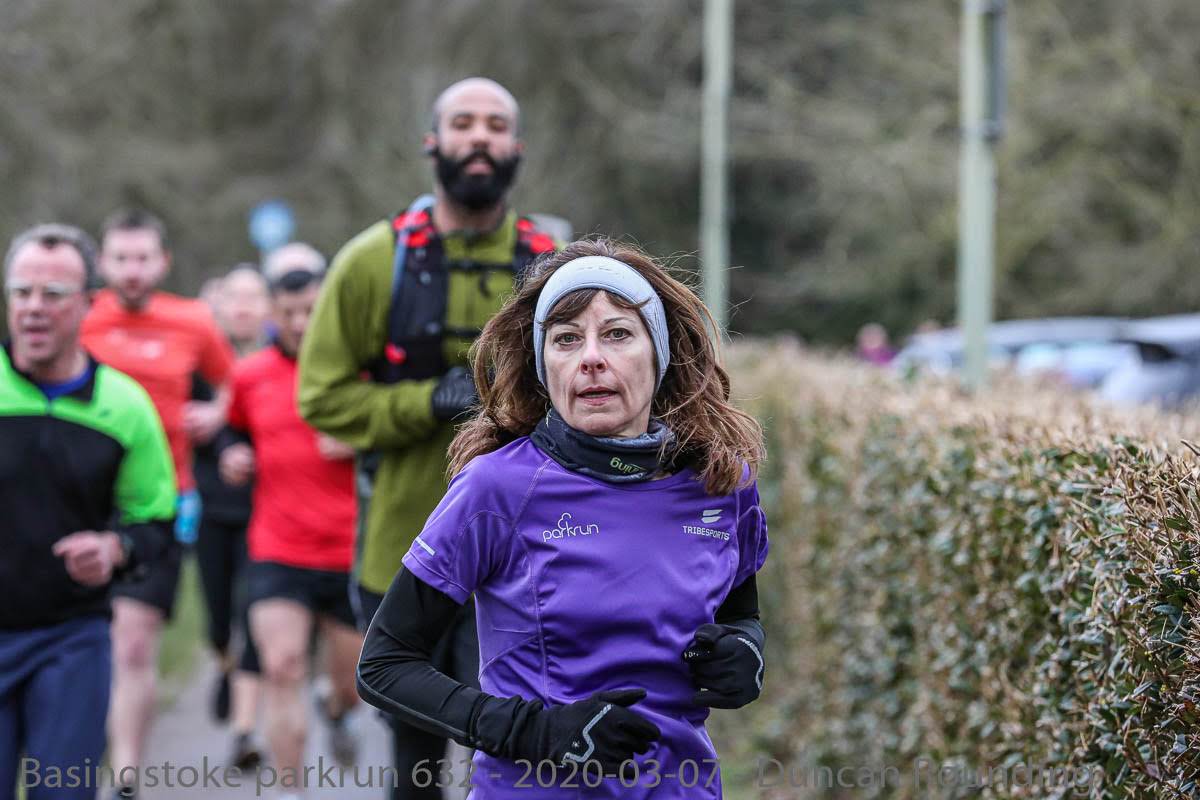 Lisa Hedderly is a true purple t-shirt hero, having volunteered at over 250 parkruns. Occasionally venturing round the course, she really enjoys making Basingstoke parkrun a welcoming place for all runners. 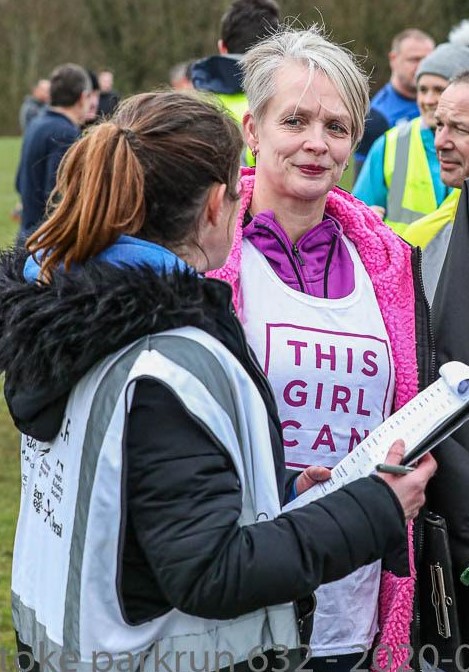 Run Director Frankie Wellings spoke about her admiration for Scottish middle distance runner Laura Muir, who completed her university studies to qualify as a vet - whilst training so hard she broke a few records! Frankie demonstrated her own superb organisational skills in overseeing today's event, number 632. 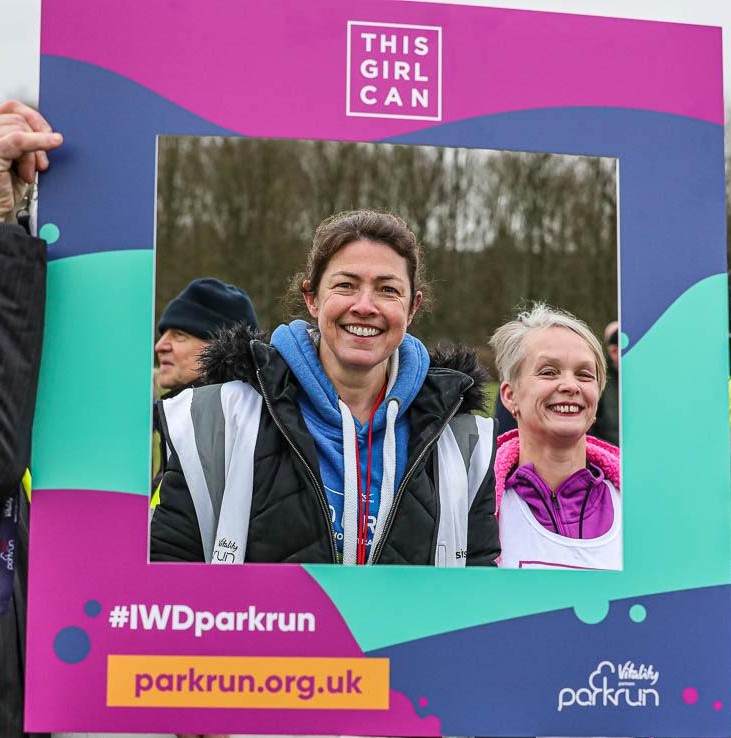 This week 564 people ran, jogged and walked the course, of whom 19 were completing their very first parkrun, and 31 were first timers to the Basingstoke course. 53 people recorded new Personal Bests. Representatives of 41 different clubs took part. 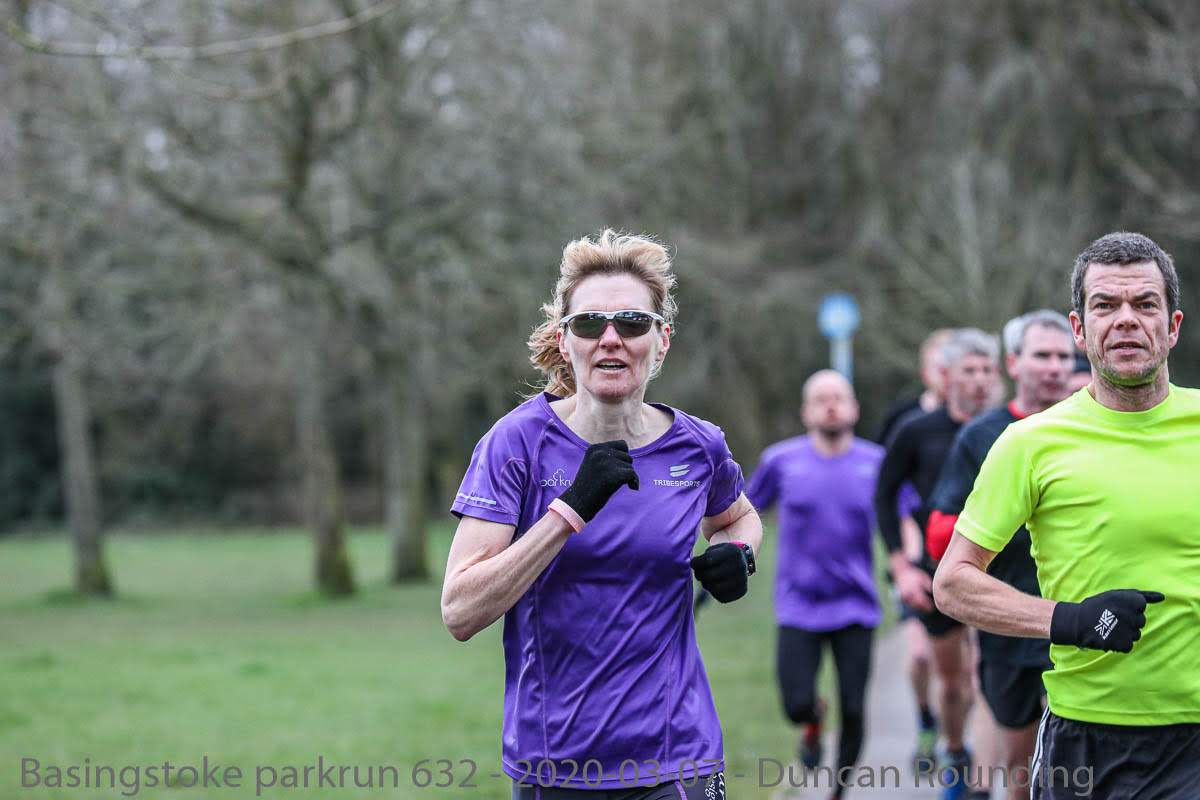 And Naomi Holborough earned her purple t-shirt with her 25th volunteer slot. 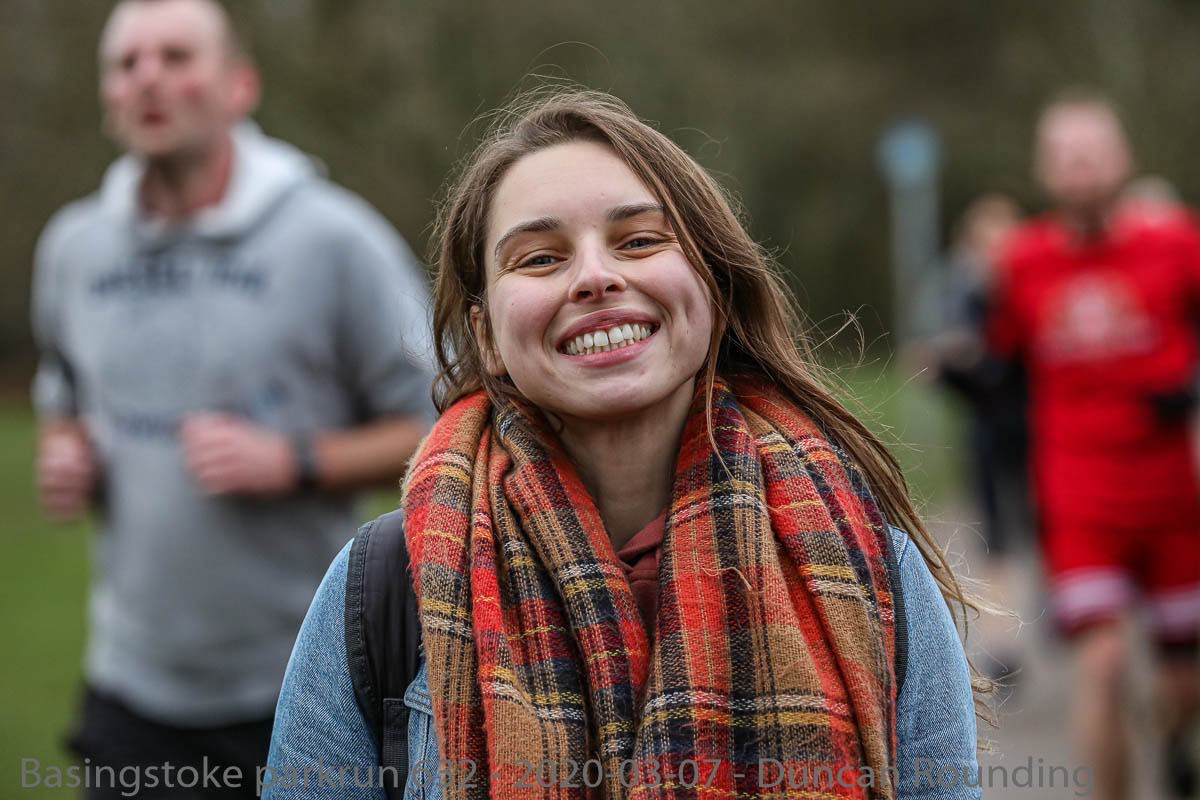 Talking of volunteers, the event was made possible by 41 of them: 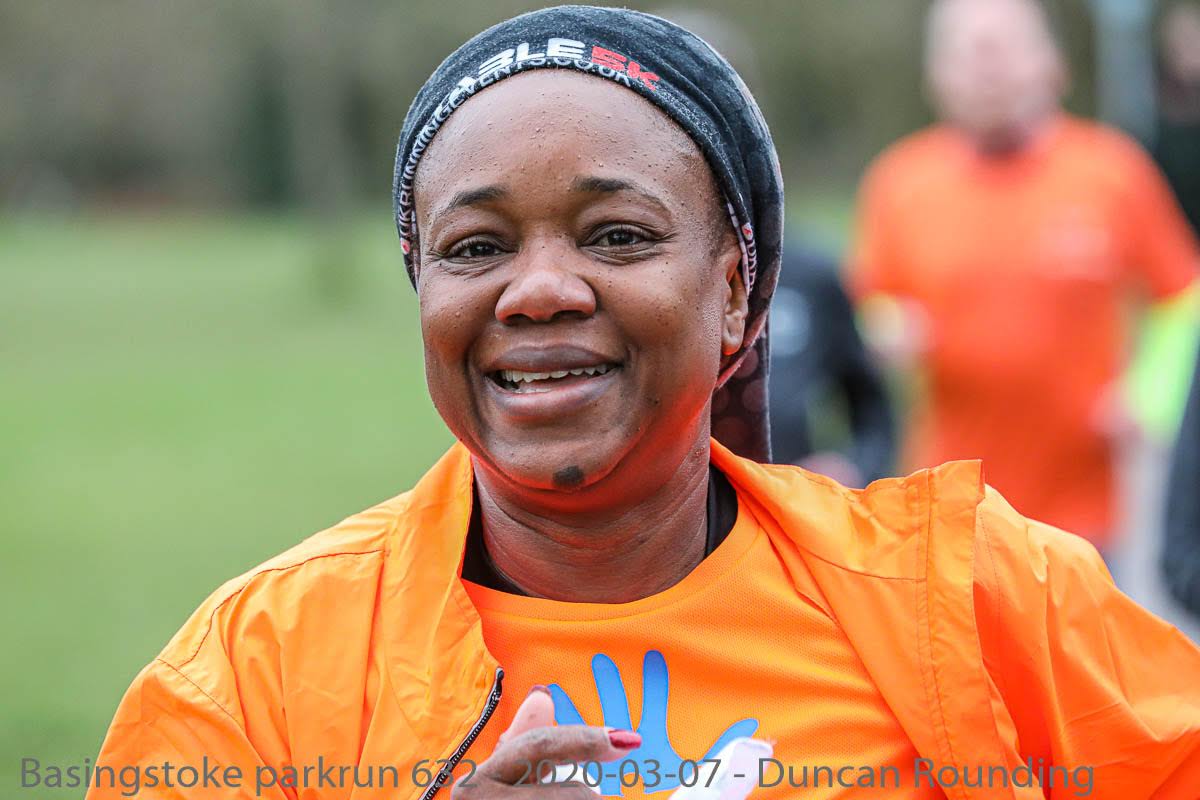 One final thought: looking back through the stats, the last time we had an overall female first finisher at our parkrun was in 2018, and before that back in 2016. So it seems like we're due another one in 2020 - who will it be?!