Can it really be only a calendar month? Around five weeks ago, Hannah Erskine pulled together her fabulous Run Report for Event #632, capturing a wonderful parkrun themed around International Women’s Day … we had one more parkrun after that, but then we (along with the hundreds of thousands in our extended family) lost our weekly burst of energy, achievement, challenge and warm companionship. That gap has brought the loss of connection for many – missing the chance to link up with old friends, make new ones and just be united for an hour or so.

So – given that just about everything else we do (at the moment) is virtual, we thought you might fancy a virtual Run Report … just to tide you over and bring a little bit of parkrun back into your life for a few minutes. (Editor's note: David has form in this regard - he was the author of the Non-Run Report for the last time Basingstoke parkrun was cancelled - at https://www.parkrun.org.uk/basingstoke/news/2019/02/04/snow-chance-of-a-parkrun/).

Of course, none of this seeks to play down the severity of what so many are facing – and we all stand together to share our parkrun spirit with those facing sadness, tough times, separation or illness. At least one of our parkrunners has had pneumonia, though has thankfully now recovered, and we send all our heartfelt best wishes to any who are struggling. We also send our treasured sense of community ‘unity’ to all those diverse keyworkers, volunteers and unsung stars who are giving so much to help so many … in these times, our strengths lie in our differences, not in our similarities.

Whatever parkrun normally means for you, whatever you miss about it and even though you can’t share your life with those you might normally be with … you’re not alone. So many of us are still running, jogging, walking or doing whatever it takes to stay healthy in mind and body.

But first, as is traditional, we just need to confirm this week’s official results.

So – this week – zero parkrunners gathered in Memorial Park at 9 o’clock to run, jog or walk the course, none of whom were completing their very first parkrun. There were zilch first-timers to our wonderful Basingstoke course, and it must have been harder going than that horrible winter event with all that horizontal wind and rain, because there wasn’t a single Personal Best. Absolutely no different clubs took part, and the first three male or female finishers were a stray dog, a bird and a kind of weird rabbit-like animal (that might have been a plastic bag, now I come to think about it). Nobody achieved a milestone – either real or unofficial – and this week’s non-event was only possible because not a single person volunteered.

So, if that’s the case … what HAVE we all been up to and what parkrun memories have been keeping us strong until we can make some new ones? Many of you have been kind enough to share your stories, all of which have naturally been anonymised to protect the innocent.

A common thread for all was the boost they got from running in better weather and lighter evenings, which brought a welcome respite from four months of dark and frosty pavements, sleety rain and slogs through mud baths. Many have found inventive routes on tracks and country roads that they’d “never known were there” around their own homes, while others have found wretched tree roots that were equally unknown – and practised spectacular nose-dives. Some have made an evening run their ‘commute’ home (from home) to decompress from their day before they sit with their families, while others have begun ‘new commutes’ to drop off supplies to vulnerable relatives.

Most try to find isolated routes, of course, but value the cheery calls to and from dog-walkers, new runners, cyclists and ramblers – from a safe distance of at least 2 metres. For most, reactions range from friendly acknowledgement to stunned horror at an approaching runner. But – for one – they appreciated the ‘surreal’ moment of seeing the same couple at the start and then the very end of a circuitous route, taking the chance to mutually applaud each other. Others have relished the relative astonishment of previously non-running friends, who have become the newest converts to our sport with a ‘who knew’ kind of epiphany and a vow to be at Event #364 (whenever it may be).

Most cited the motivation of having to counteract colossal increases in ‘lockdown’ biscuit intake, and many were surprised to miss the parkrun routine of getting up early every Saturday morning – come rain, sleet, snow or debilitating hangover. New habits include creating ‘virtual 5K parkrun circuits’ and running that same route (once a week) with a milestone t-shirt and wrist-band barcode anyway – targeting the previous week’s PB. To break up the running, most had turned to the Joe Wickes workouts (alarmingly hard, apparently), dusted-off their bikes (and bought new helmets online) to savour the relatively quieter roads or even invested in spin-bikes for home.

A pleasant surprise for some was the realisation that exercise was a privilege, not to be taken for granted, with many upping their quota to go out every single day – something they hadn’t been motivated (or found the time) to do before! Another revelation was that some actually missed – and this isn’t a typo – they actually missed Crabtree. As moths to a flame, some even chose to go there of their own free will, with others saying that monstering that nemesis hill is their target, their focus and their goal for when we can run again. 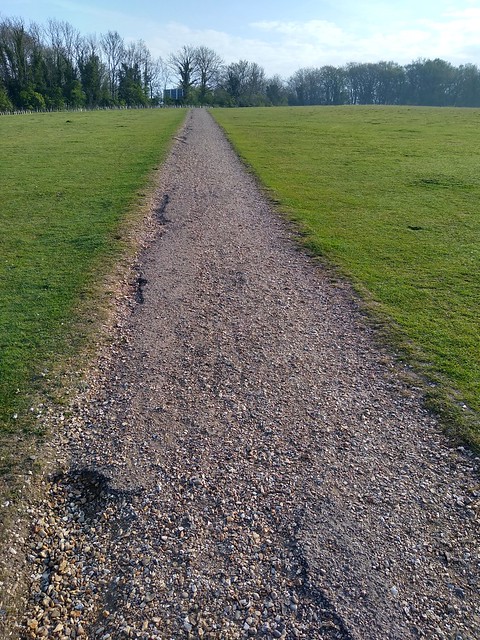 One brave soul is even tackling the beast that is Watership Down (near Highclere) in a bid to be ‘ready to face the enemy’.

Inevitably, many of our ‘family’ have been sustained by parkrun memories from happier times – moments such as the transformative experience of guiding visually-impaired friends like Tony and Sandra around the course, and even helping Tony to complete the Half Marathon (twice)! Another favourite was the parkrunner passing a father and his two children who were intermittently walking and jogging. Whilst the youngsters were obviously enjoying the event, the father was also telling them a story along the way – weaving in plot points from the children as they went. But, one memory that seemed to have scarred most was the first of Matt Pillinger’s (multiple) topless parkruns – that one on the snow-course of March 2018 … brrrrr!

For those of us who’ve reached official milestones, those are particularly cherished memories. Being Britain, many recalled that it was chucking it down on those days – even bringing a biblical thunderstorm for one pair. Whilst it didn’t drench the celebration spirits, it did dilute the prosecco and dampen Denise Hope’s delicious cakes. Fellow Run Directors recalled highlights like introducing a parkrunner visiting his one-hundredth individual event, or having to use a traffic cone for the brief when the PA system was out. Others loved sending a ‘shout out’ to Euan Bowman (Basingstoke parkrun founder) or even hosting the legend who is Paul Sinton-Hewitt (founder of the whole phenomenon). Naming him in the brief as Paul Hinton-Sewitt was a bit offside though …

On the theme of ‘where it all began’ (16 years ago), many held fond memories of running the quintessential parkrun course at Bushy Park in Teddington – though one group didn’t remember much of the detail. Having incorporated it into a stag weekend, they’d ‘enjoyed’ the event after only four hours of sleep, way too much beer, no money for the bus and a freak March ‘Beast from the East’ blizzard … one had even run so slowly, he’d ended up with one side of him fully caked in snow.

No Run Report could possibly be complete without mentioning our wonderful volunteers – with so many of us missing their cheery weekly support, in all weathers and with such good humour. The regular volunteer leaders miss greeting their new ‘supporters’ for each event, and I want to believe that (just maybe) those thousands of parkrun unpaid helpers played their part in making community volunteering so key to getting us all through these tough times. Many are looking forward to the milestone of qualifying for their purple 25th volunteering t-shirt – I know it’s probably the favourite one of the four I’ve been lucky enough to collect.

So … we might be apart, but we’re definitely not alone. Every message I received included one thing that we were all looking forward to – meeting our parkrun friends in the park again. Hugging, shaking hands, smiling and gazing in wonder to the left and right across the start-line, straining at our collective leash as the Run Director of the day counts us down. Spirited round War Memorial Park (or Crabtree) on a collective tsunami of goodwill – as one united family – we will party in the park.

Until then, we all hope you find a way to keep on running, jogging, walking – or whatever you do to stay healthy and positive. Naturally, as good parkrun folks, we know you’ll respect the rules, the guidelines and others around you – to keep us all safe. I’d normally sign off my reports with a cheery call to see you same time next week in the park, but … well, you know.

So – instead – how have you been? Take care … stay strong.