Foolishly I said I’d write a run report. Never done that before and now not really sure what to say! At its most basic level I suppose it should be who, what, where, why and when and most of that is already on the Facebook page . . .

On Saturday 27th July, 459 people set out to run (or walk or crawl) 5km of the Bath Skyline. According to the results page that is the largest number ever for Bath. I don’t know why the numbers fluctuate so much - five weeks in the low three hundreds and then suddenly 459. Was it because it was run number 250? Seems like a nice round number worth marking. There were certainly lots of tourists and first timers at the pre-run briefing. If I counted right on the results page 116 first timers to Bath and 40 people new to Parkrun enjoyed some pretty good running weather as well as some great city views. 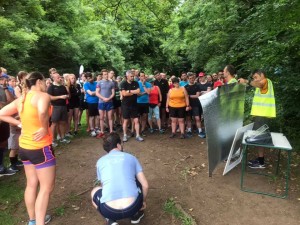 Particular thanks go to Mark at his last outing as Run Director. A pretty intense job and one I wouldn’t fancy. It’s easy to forget the many people who volunteer each week and take them for granted. Without the run directors the whole thing would never happen and they especially deserve a ‘thank you’.

That does the who, the where, the when and the what, which leaves the ‘why?’. There are probably 459 different reasons and I can only give mine . . . I started the new year with my first Parkrun having no idea what to expect. Having run every weekend now except the cancelled run during the great spring snowstorm I can say I am fitter and healthier. I don’t have to walk anywhere on the course (except up those steps - and that’s usually because there are so many people there (what am I saying, it's usually because I’d have a heart attack half way up if I tried running up them)). I have enjoyed seeing the countryside change during the seasons. I have become slightly obsessive about seeing the results come out and wondering whether I have a new PB. I have even found myself planning a trip to Cornwall so that I could run at Taunton Longrun Meadow on the way there which is surely a sign of insanity.

It is definitely true that exercise and being outdoors are good for mental health. When I am running I tune out completely the stresses of the week just gone by at work. The weekend starts right with Parkrun with no more wasted Saturday mornings.

I don’t know the other 458 reasons people had for running last Saturday but I am pretty sure many will be back this week for more of the same and long may that continue.