Preparations and First Timers
It was a sunny crisp morning as the volunteers and marshals assembled prior to Bath Skyline parkrun No. 256. It was clear that those who were not yet actively involved were feeling the chill of the 11C air temperature. After a thorough briefing from Run Director Helen the volunteers set about their allocated tasks. 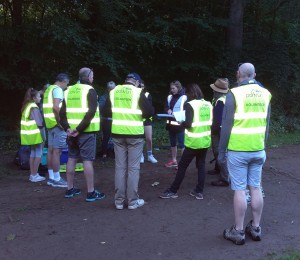 As usual there were a significant number of visitors and first timers in the 358 who came to run. Early arrivals included runners from Cheltenham, Rothwell and Shrewsbury.
First timers included Gemma who had come with a regular parkrunner (below) 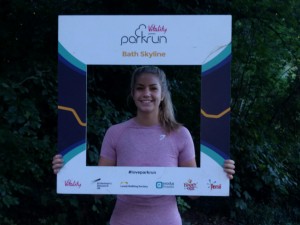 Also Hero, a deer hound and probably the largest dog ever to run at the Skyline parkrun, came with his owner Mark who is a regular runner (below) 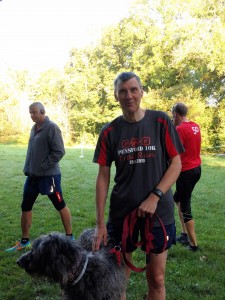 Peter from Australia had probably traveled the furthest (below) 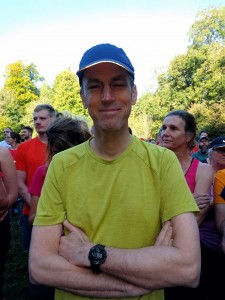 As the start time approached James captivated the first timers with his briefing on the course.

The Run
As there were such good conditions it is not surprising that a lot of people seemed to want to start near the front. Consequently those of us in the middle of the field experienced a bit of congestion in the first section of the run round the rugby field along the Skyline path and up to the top of the steps.  As normal things became less intense after the turn down the long straight back towards the start. There was the usual reordering as the some of the optimists from the start dropped back through the field and one or two strong runners made there way up through the field. Avoiding the stumps and bumps through the wood kept the mind engaged. There was also the business of deciding who to try and pass , who to try and keep up with and who to watch disappearing into the distance. The field seemed to spread out as we ran up the hill and across the fields. I always find that people pass me on the long down hill to the finish. I used to think it was because I slow down as I get tired but Strava tells me I speed up in the last Km. It seems a lot of other people speed more than me! The finish seemed to be reached with less effort than last week. The higher number on the barcode confirms it almost certainly was! What was it the teachers said at school, "must try harder next time".
Milestone & Statistics
Of those who had their barcodes with them:
16 people ran their first parkrun,
10 people ran their 10th parkrun; 3 of them in new PBs.
4 people ran their 50th parkrun and
2 people ran their 100th parkrun.
This week 358 people ran, jogged and walked the course, of whom 61 were first timers and 45 recorded new Personal Bests. Representatives of 31 different clubs took part.

Today's full results and a complete event history can be found on the Bath Skyline parkrun Results Page.