The rain held off for Bath’s 5th birthday parkrun! Since its inception, the average number of runners at Bath parkrun has grown from 160 in year 1 to over 350 during the last year. There are now 12,870 runners registered at Bath!

To celebrate the anniversary, two special guests – Stuart Hooper (Director of rugby at Bath Rugby) and the gold-medal-winning Winter Olympian Amy Williams were on hand to present awards. 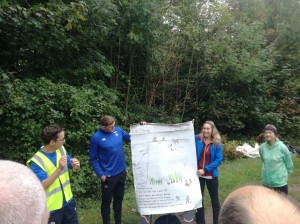 There were prizes for…

There was also a special mention to Tom Room at Relish Running for donating the prizes and supplying a marquee for our birthday to keep the cakes dry!

Congratulations to Mark Lewis, who completed his 100th parkrun and Jack Leonard, Fedra Zaribaf and Louise Kirby-Garton who completed their 50th parkruns! Well done to Oli Haytor and Sophie Harrison, who joined the junior 10 club.

It was great to see so many runners lining the funnel at the end to cheer on their fellow parkrunners.

A massive thank you as always to Helen and all the volunteers!