Well that was a wet and muddy parkrun this morning! Thanks to Matt and all the volunteers for making it happen.

Beckenham Place parkrun welcomed a host of new runners this morning and I thought I’d just give a mention to two parkrun tourists Scott Clarke and Paul Bliss who had arrived from St Albans and Harlow. They are seasoned parkrun tourists who have now clocked up 115 and 79 different parkruns respectively. This includes each being members of the unofficial Cowl Club and having completed the parkrun Alphabet Challenge completing parkruns starting with each letter of the alphabet excluding X. Scott and Paul both help to give back to their local parkruns by volunteering at the Junior events on Sundays.

Today Paul drove to Beckenham Place parkrun and Scott had pre booked his train ticket but a cancelled train at Blackfriars this morning nearly scuppered his plans. Knowing that Paul would be there spurred him on not to miss it so he leaped into a taxi and made it just in time for 9am to set off with the rest of the runners. Thank you for coming all this way and I hope that it was worth it.

It was good to see so many new runners today and of course lots of our regulars too in spite of the rain and mud. Same time next week? 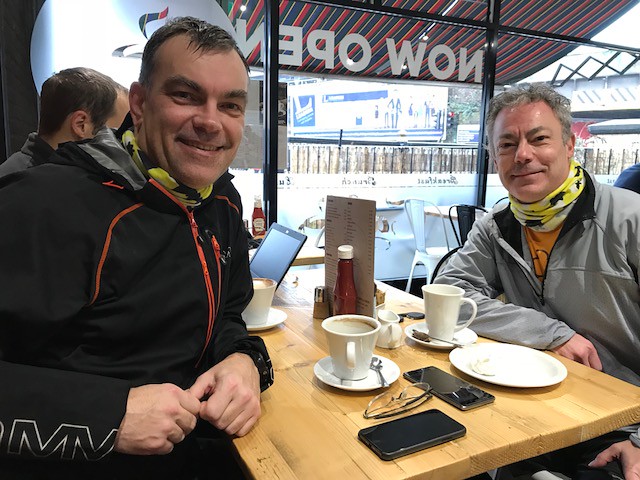 Now that our Birthday celebrations are over, it is time to turn our attention to the fast approaching festive season! The following events will be happening:

Sat 23 Dec - Normal Saturday parkrun at 9am - but please wear something festive (if you want!) - reindeer antlers, santa hat, tinsel, full on elf outfit - all welcome!

Mon 25 Dec - Extra bonus parkrun at 9am! We do need to have volunteers in order for this to happen so please let us know if you can help out for this one well in advance.

Mon 1 Jan - There will not be a parkrun at Beckenham Place, but there are lots of other options for a run (or you are even allowed to do two runs on New Year's Day!). See compendium of events here: http://www.parkrun.org.uk/christmas-compendium/

There may have been clouds in the sky today and it was a bit parky out (was it really only 7C when I left home this morning?) but it was dry (hooray) and the army of Volunteers led by our very own Event Director Phil Davis was buzzing with excitement as they set up the course to be run for the first time in reverse for the First Anniversary of Beckenham Place parkrun. Tables were erected, flags and balloons set waving in the breeze and cakes laid out. Phil had made a wonderful parkrun Birthday Cake and Zoe Sopper lots of lovely parkrun cup cakes for hungry runners to devour after the run. 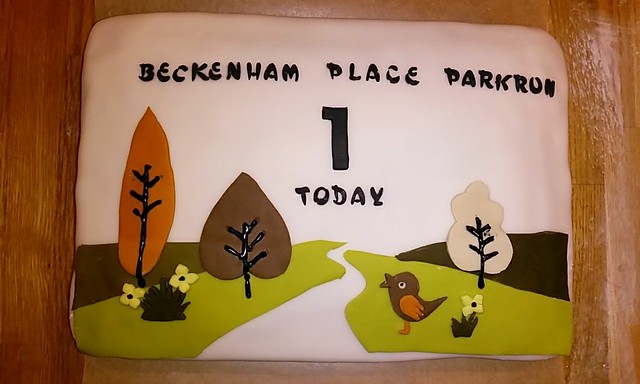 The pre Event set up was completed as the first runners gathered at the start for Phil’s talk welcoming us all to our First Birthday’s Run. Today’s new course was explained and today there were no runners celebrating parkrun milestones but we were treated to some stats which Phil had prepared. Amongst those were:

All those from our one event!

Before today’s 183 runners were set off on their way Phil and Maria Chandler our extremely dedicated Volunteer Coordinator were presented with gifts. We had wanted to show our appreciation of the major contributions this fine duo make to the smooth running of Beckenham Place parkrun. The speeches were over, the volunteers had been thanked and the run was set to go by Nicky Howard one of our 2 Timekeepers.

As a spectator to the first half of the run today it was fun to watch the new route taking shape, the runners disappearing through the narrow cut through and we were waiting with some expectation for the first of the runners to re enter the field. Out front we were treated to a convincing lead by Dame Dibaba who set a new course record beating his own record with a fantastic time of 15:58. 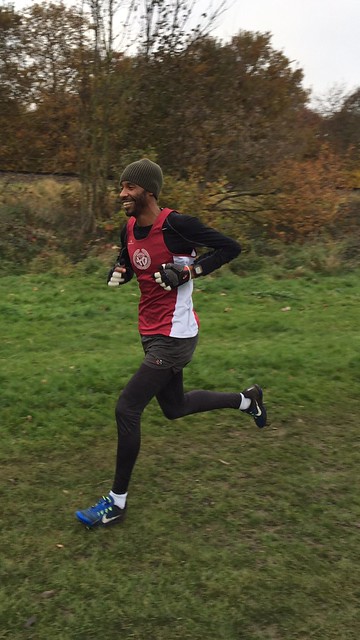 Well done to all of you who ran today whether getting brand new PBs or striving to get round in one piece before perhaps sampling the Birthday cakes and getting on with the rest of your weekend. A big thank you to Phil, Maria and all the volunteers and should any of you like to help out in future weeks then please check out the roster on Beckenham Place parkrun website and email Maria to join in. The roles are all easy to perform, training will be given to newcomers and some roles can also be combined with a run on the day. It’s another fun way to become involved and there are currently several spaces on the roster for next week.

Happy Running to you all and here’s to a thoroughly enjoyable second year of running in our parkrun. 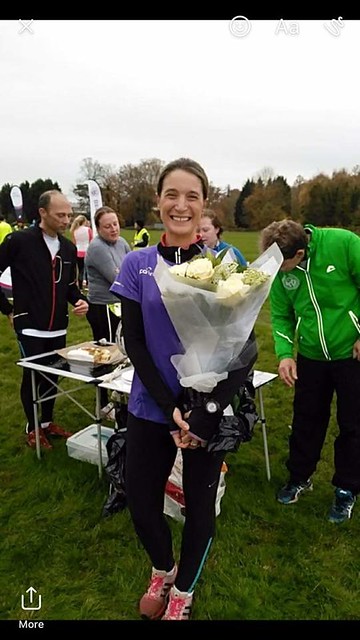 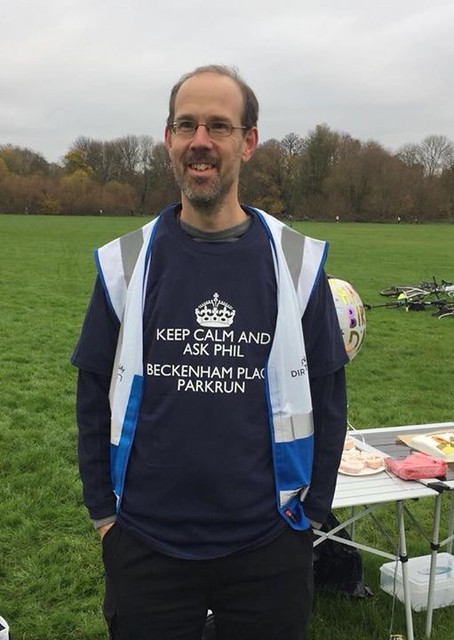 In parkrun circles there is an oft repeated maxim – ‘it never rains at parkrun’. This refers to the curious phenomenon that regardless of the forecast there will be a window between 9 and 10 am on Saturday morning during which any bad weather will hold off, allowing parkrunners to complete their 5k run with the elements on their side. This phenomenon is part of what makes parkrun a little bit magical, and is attributed to the ‘parkrun weather fairies’ that allow for ideal weather conditions during the event. Now I’m not going to comment on the existence or otherwise of such supernatural beings. But what I will say is that if they do exist then they weren’t following their work instructions correctly this weekend. When I left home at 7:30 it was overcast but otherwise fine, and later in the day it brightened up nicely. But during the run a passing shower announced itself overhead, drenching runners from head to toe and making conditions underfoot rather treacherous. Hopefully those weather fairies will be resuming their normal service next week! 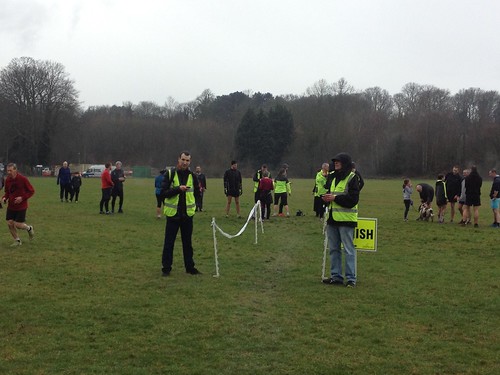 The Beckenham Place parkrun finish funnel – a welcome sight on a day like today!

Perhaps unsurprisingly the rain led to an attendance of only 89 at the 11th Beckenham Place parkrun, which is the lowest number of runners in the short history of this event. However the weather did not deter 34 first timers on the day, 9 of whom were completely new to parkrun too. Welcome to you all, and we hope to see you again soon. And while running conditions were less than ideal, there were some impressive performances in spite of that.

For the men, Matthew FIELD was first across the line at the sixth time of asking with a time of 18:24, Tim AYRES of Blackheath & Bromley Harriers AC took second place with 18:31, and Graham SUTHERLAND of Clapham Chasers RC took third in 18:39, running his second fastest ever parkrun and equalling his highest ever parkrun finishing position in the process. Crystal Palace regular Liz PEPPER led the way for the women, running her second fastest ever parkrun in a time of 23:27, Linda INGRAM of South London Harriers was second in 23:43 and Melanie BURDETT of Beckenham RC took third with 24:23. Great work, folks! 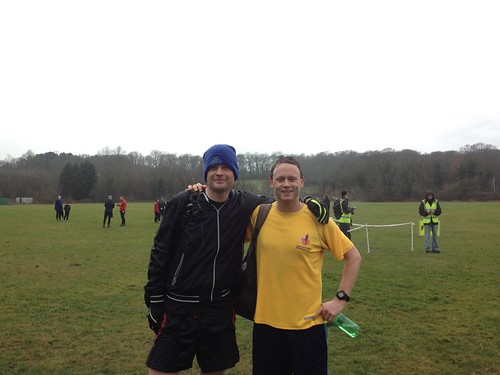 Third place finisher Graham Sutherland (left) together with his clubmate Chris Williams – who was kind enough to offer me a lift home!

And what of PBs, I hear you ask? Well while there were only 9 today, there were also a few standout performances among them. For example, Yuval GEFFEN and Wallis HANDELMANN improved the times they set last weekend by 42 seconds and 2 minutes 8 seconds to get 25:49 and 27:57 respectively. And Janine DREYER knocked 52 seconds off her previous PB in her third consecutive run here with 29:47. But the single biggest improvement of the week came from John O’TOOLE of Petts Wood Runners, who bettered the time he set on New Year’s Eve by an astounding 3 minutes and 32 seconds and has a new PB of 25:03. Bravo to you all!

Event 11 was also a special one for Karol DORNIAK, who chose to complete his 50th parkrun at Beckenham Place and did so in a time of 21:08 – his 20th fastest ever parkrun. Congratulations, Karol – and don’t forget to claim your red milestone shirt! 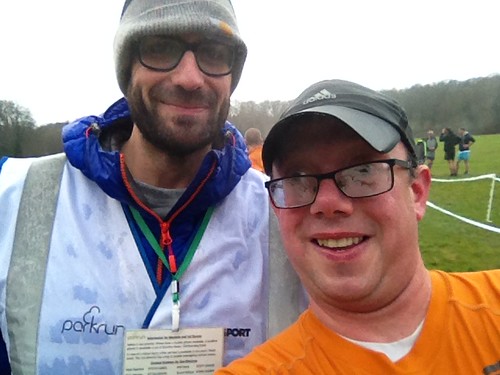 Finally, a big thank goes to third time Run Director Julian KING, who did an excellent job in making everyone feel welcome on the day, and to his helpers Anthony LENNOX, Georgina SELWAY, Kyle DAVIES, Maria CHANDLER, Mark RUSHTON, Mark SHOTTON, Miranda KING, Molly DAVIS, Pat KERRINS, Patrick BAUGHAN, Phil DAVIS, Tim AYRES and Zoe SOPPER. As you may be aware, parkrun is organised by volunteers and we need help every week, so why not help out a few times this year? You can do so by having a look at the roster at http://www.parkrun.org.uk/beckenhamplace/futureroster/ and e-mailing us at beckenhamplacehelpers@parkrun.com. And while experience is not required, enthusiasm is essential! 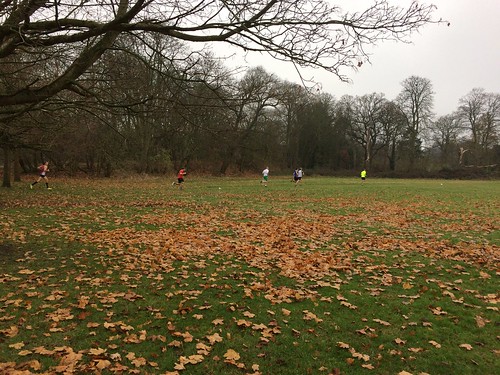 I couldn't join you all this morning, so the first event I've missed and looks like the weather was pretty kind despite the forecast. With numbers swelled by Beckenham Running Club, we had our second best attendance yet, beaten only by our inaugural event, which is very impressive!

Beckenham Running Club joined us today for their monthly friendly competition event and fielded an impressive team of 40 members!

See you all next week, and just a heads-up that we will have a festive dress-up run on Christmas Eve, so start dusting off those elf ears, santa hats and reindeer antlers!

This week there were 168 runners, of whom 91 were first timers and 47 recorded new Personal Bests. Representatives of 22 different athletics clubs took part.

Beckenham Place parkrun started on 19th November 2016, and since then 470 different runners, including participants from 62 athletics clubs, have completed 649 runs covering a total distance of 3,245 km, and there have been 115 new Personal Bests.

Today's full results and a complete event history can be found on the Beckenham Place parkrun Results Page.