With showers forecast for Saturday morning, I was relieved we didn't put too many people off by posting previous "Bedfontos in the rain" photos on Friday: 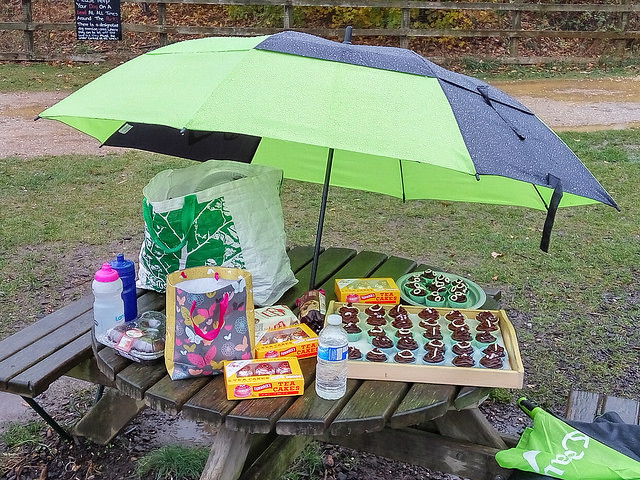 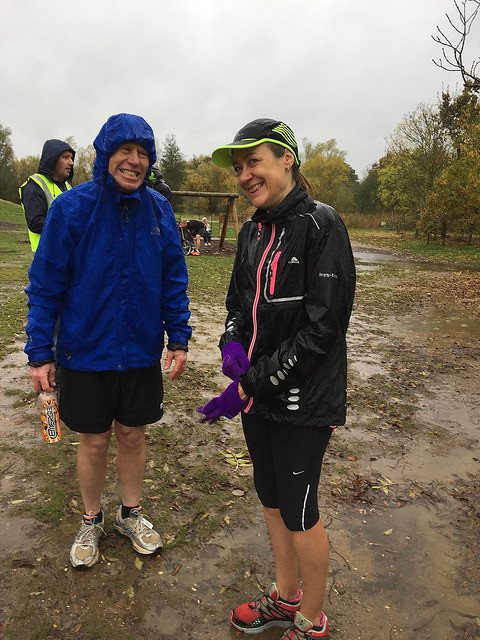 We welcomed close to 190 participants including 23 visitors and 8 doing their very first parkrun. For those new to Bedfont, it isn't always muddy and puddly, just for the next five months or so...

Our volunteers were fantastic as always and a little bit of drizzle did not deter them. Dan even discarded his umbrella, but this may have had more to do with trying to hold a string of finish tokens and dispense 185 of them in strict numerical order!

Thanks to Ian for run directing, and the rest of the hi-vis team: 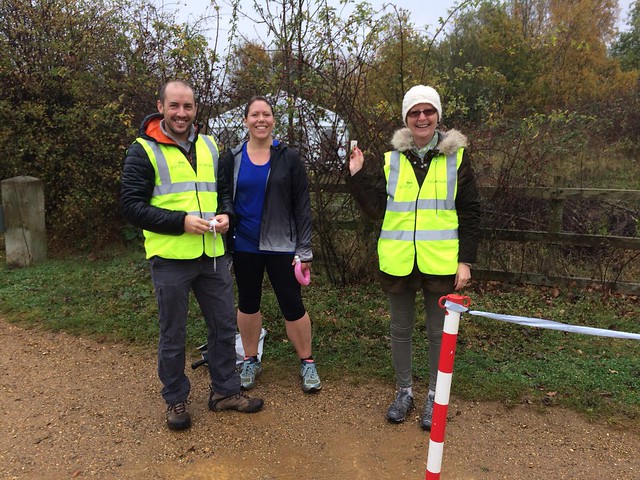 Amongst the visitors were Kobus Botha from South Africa on his 23rd parkrun and Claire Seckington from Buckingham who had just stepped off the plane from Vietnam to complete her 128th parkrun! Great tourism. (By the way that is Steven from Shepperton in the photo with Claire, not Kobus!) 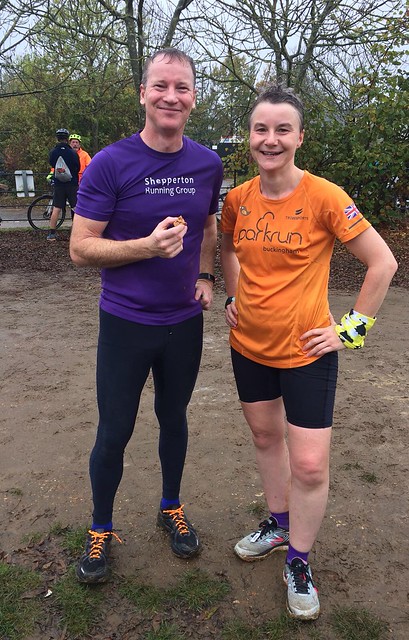 We also met Ron Trotman from Wanstead Flats parkrun who is aiming to complete all the London events, Bedfont Lakes being the furthest west out of them all. It's lovely to chat to visitors and find these nuggets of info, so if you're travelling make sure you introduce yourself to the RD and give them something interesting to put in the run report 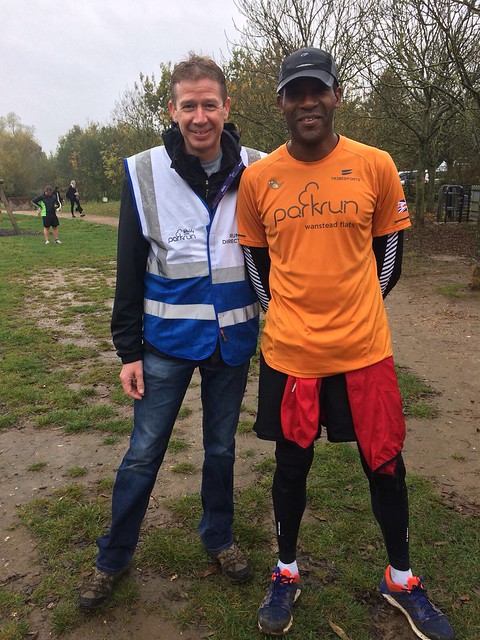 Juniors Oliver Biswell and Emma Fisher were celebrating their 10th parkruns. Well done Oliver on a new PB and thanks to Emma and family for some lovely cakes! David Barnes, Alan Brown and Simon Hickmott ran their 50th parkruns - congrats to you all.

Owain Morris from Aberdare Valley AAC was first to finish in 18:08, a new PB for Owain who's run this course 11 times now. Simon Long and Rory Townsend were second and third, both visitors to Bedfont Lakes. Ian Berry-Bowers, also a visitor and in fourth place, left us some nice feedback:

"My first time at Bedfont Lakes and I had a lovely time. Such a lovely course - the gentle undulations and twists/turns made the kilometres fall away! Thanks to all your wonderful marshals for standing out in the ran so we could run."

Out of the 13 who achieved personal bests this week, special mention goes to Daniel Bonilla who took an amazing 4:11 off his time and Megan Hedges who took 3:45 off hers. Of course, a PB is a PB so all those with a new time should feel very proud.

(All this statistical reporting doesn't write itself so thank you to David Duggan who contributed this bit!).

**EXCITING ANNOUNCEMENT**
We're delighted to inform you that Claire Crook, one of our super volunteers, will be joining Ian Cockram as Co-Event Director for Bedfont Lakes. Claire is already a Run Director at Laleham junior parkrun and Bedfont, volunteering practically every weekend. She supports husband Kevin and son Henry in their running, and embraces the parkrun ethos... including dressing up for special occasions (see below). Claire will play a key role in keeping Bedfont Lakes the fab event that it is, along with fellow Co-Event Director Ian and the Core Team! 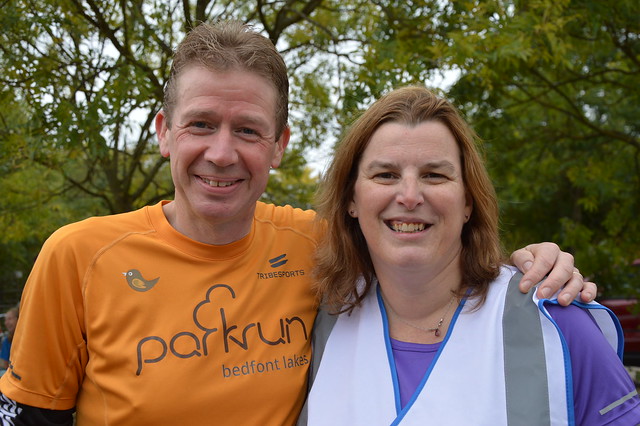 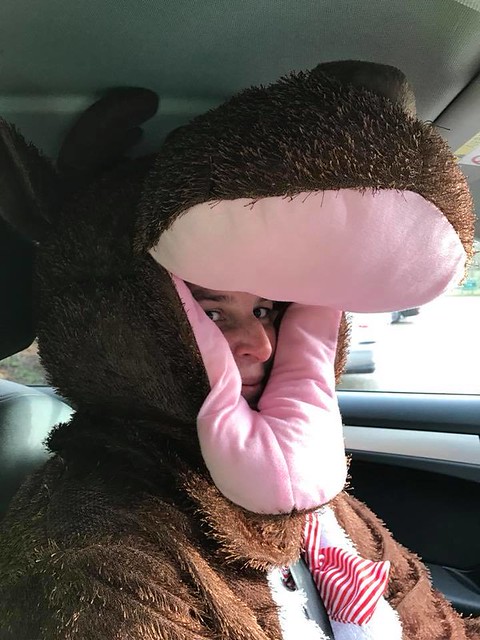 Before I sign off, there's one last important message from one of our parkrunners Enyi, who was unfortunately involved in an incident with a van whilst cycling. Thankfully he is recovering, but a fellow Bedfonto helped him at the time and he would like to find out how to contact her:

"I was run over by a van whilst cycling along Feltham Road, Ashford on Thursday October 26 2017. A good samaritan, Charley, stopped to give me first aid whilst the ambulance was on its way. She even locked up Giulietta - my bike - when I was taken to hospital. By an amazing coincidence, Charley is also a Bedfont Lakes parkrunner and I would be grateful if she or anyone that knows her could get in touch so I can thank her for her extraordinary kindness."
Enyi

So if you are Charley, or know Charley, please email bedfontoffice@parkrun.com. All the best Enyi and hope to see you soon back at parkrun! And thank you to samaritan Charley