Welcome to the run report for event #327, we know many other parkruns and other fantastic things are vying for your attention, thank you for choosing to spend your precious time with us reminiscing about a run in a park. So, what did happen on the 20th November at Beeston parkrun?

Well, unsurprisingly, we had some runners running: 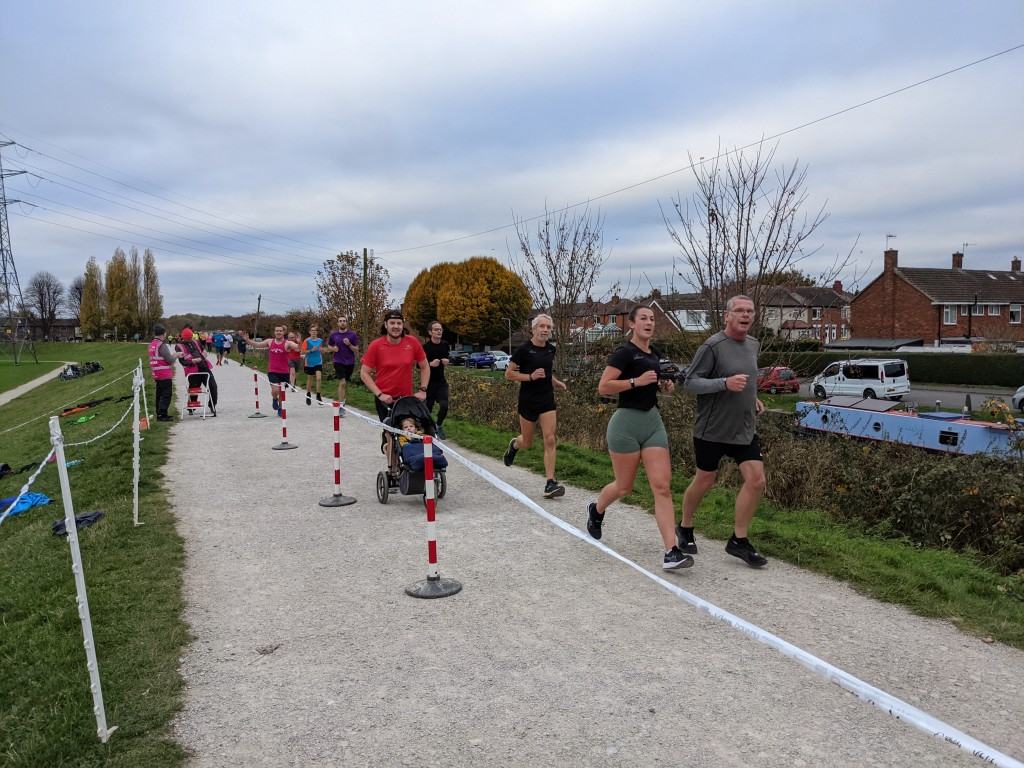 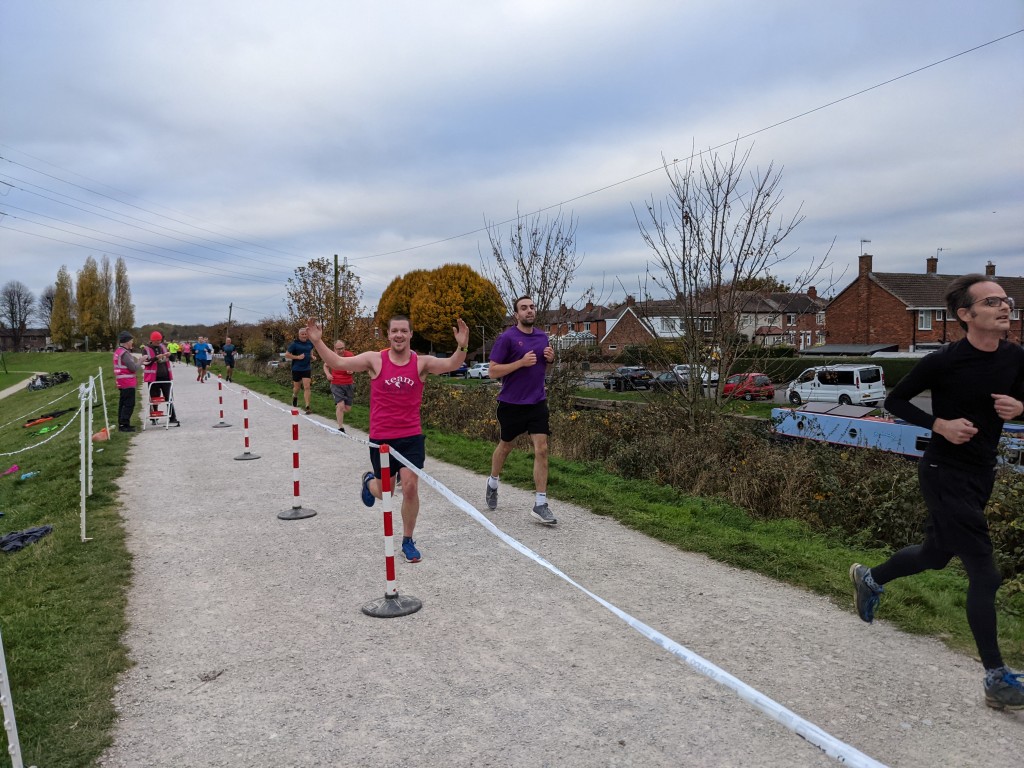 One of whom had bravely traveled a long, long way to run this run ahead of everyone else running this run... 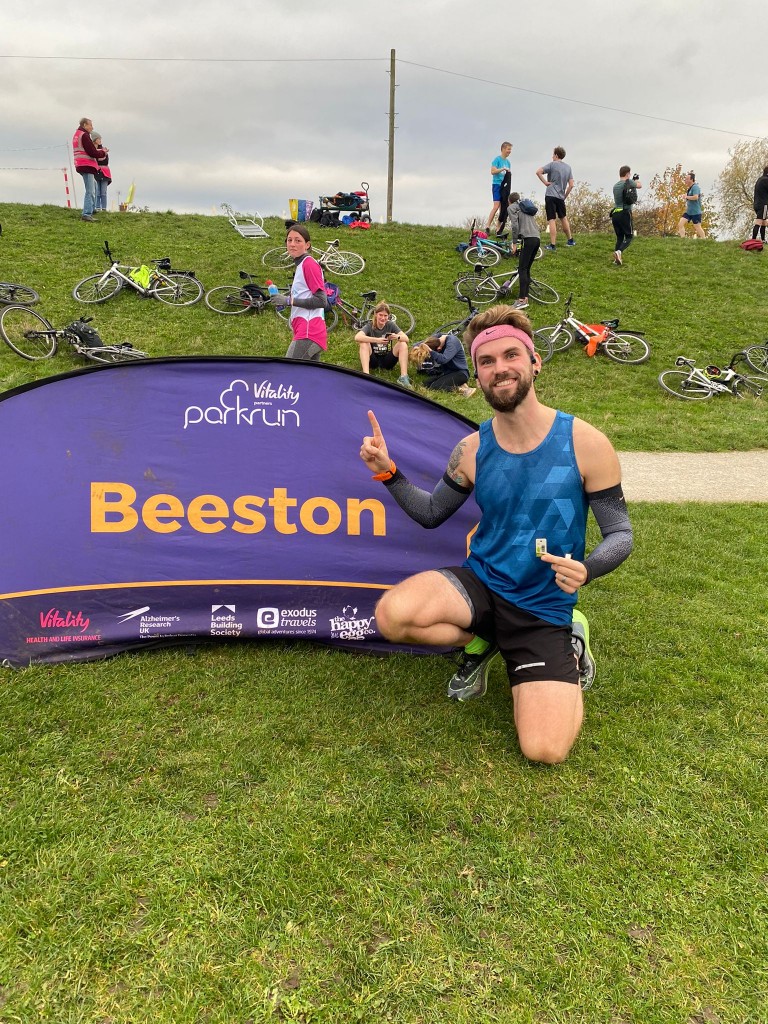 We also had celebrations for a couple of milestones that I'm aware of: Ruth Goddard (JW 11-14) hit 50 parkruns! Congratulations Ruth! (Sorry we didn't get to grab a photo to celebrate.)

Anna Gilkerson was also celebrating, having run her 100th parkrun: 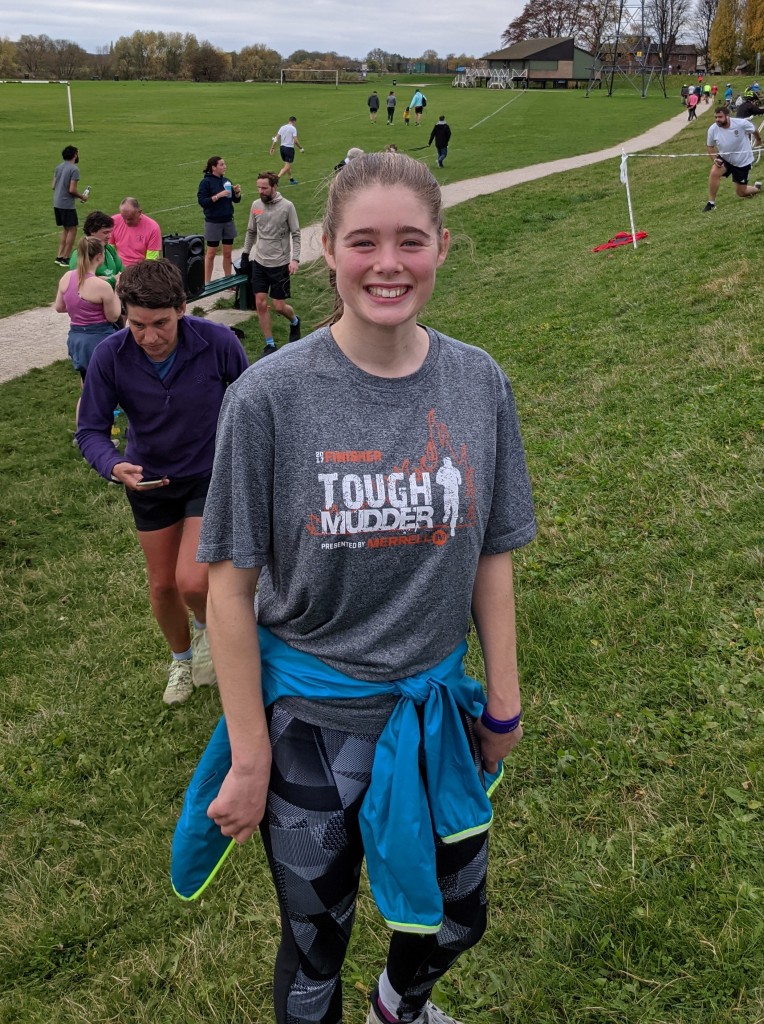 Fantastic job! Happy smiles like that are what bring me back week after week to parkrun.

Putting on a parkrun relies on the incredible team of volunteers we get each and every week. If you ever fancy giving us a hand please get in touch. And, in a demonstration of that team work... how many volunteers does it take to put up the finish funnel? 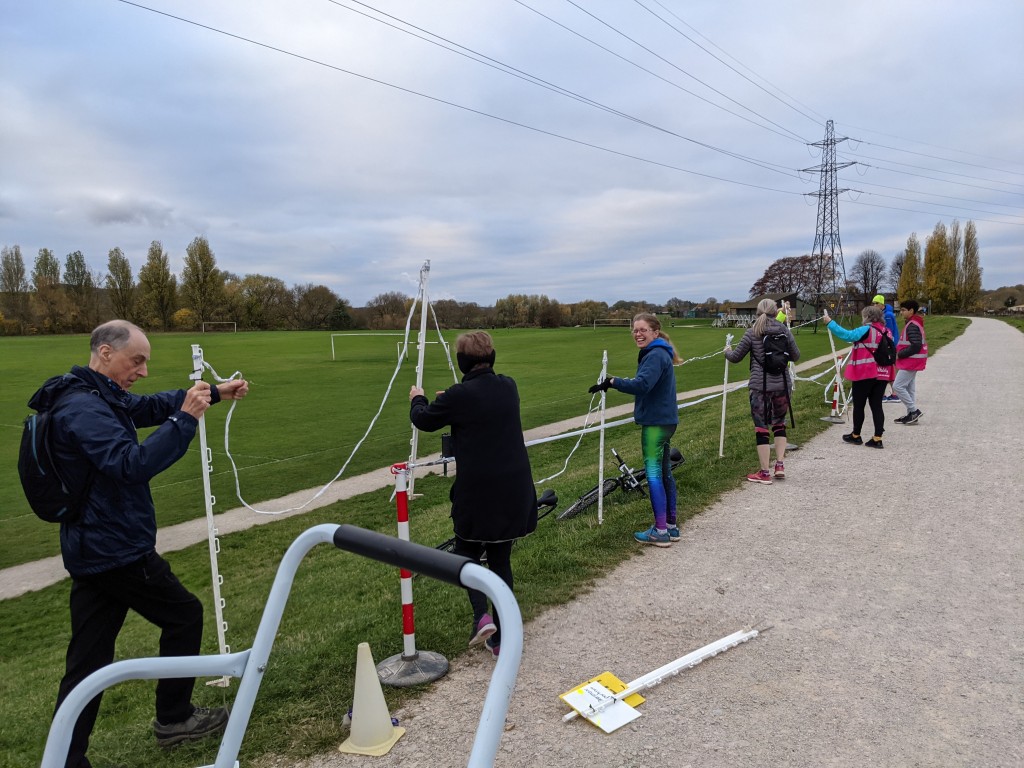 It was great to see everyone at Weirfields yesterday morning for top dollar conditions for November. The headwind took a well earned break and the PA speaker had finally dried out, so the run briefing did not sound like a dalek invasion! 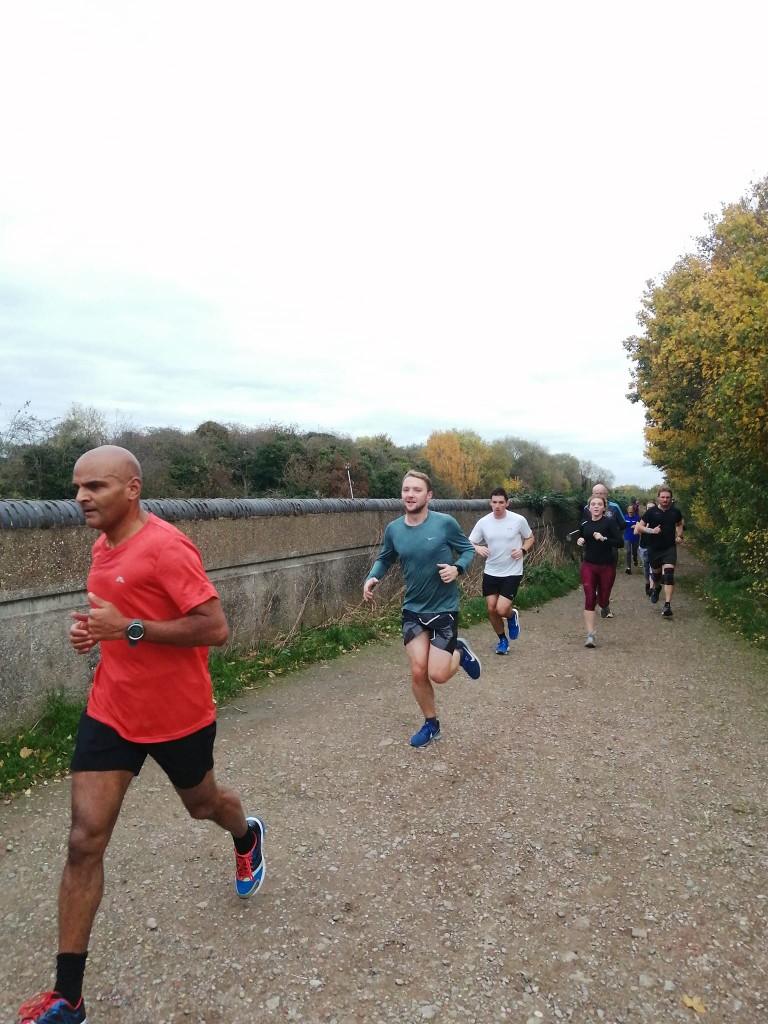 Even the puddles along the rugby club track were few and far between, although one or 2 of our regulars looked lost without them! (thankyou for sharing these pics, Dave Cross) 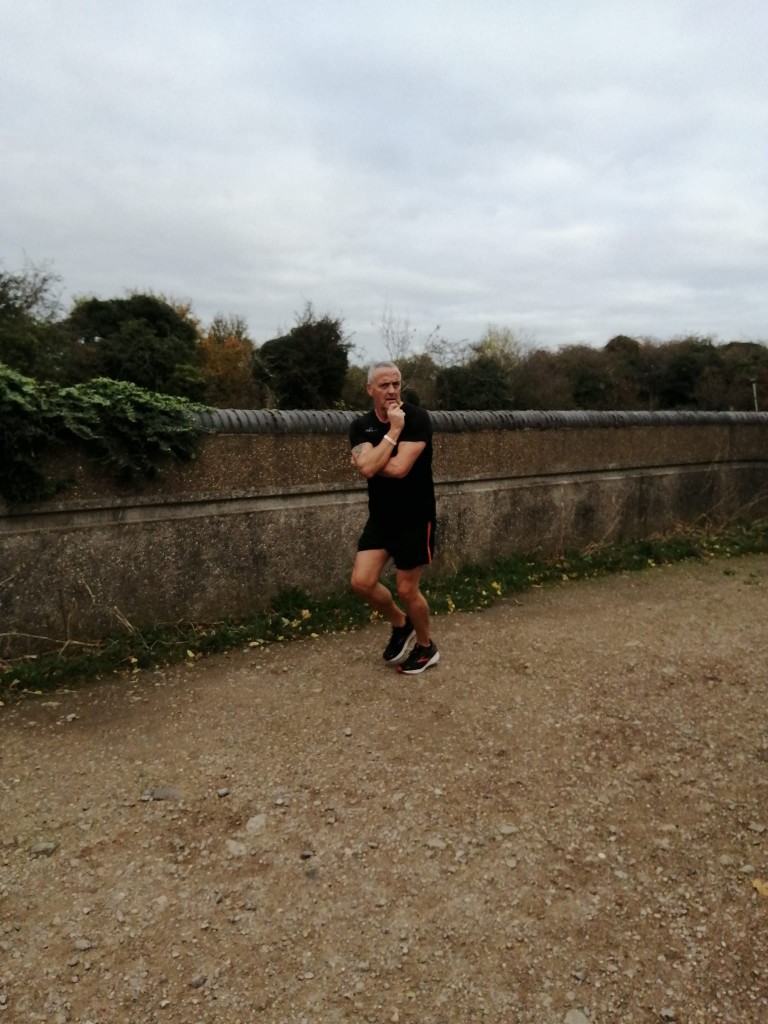 This week 274 people ran, jogged and walked the course, of whom 25 were first timers and 42 recorded new Personal Bests. Representatives of 22 different clubs took part.

It was good to see some buggy runners around the course, including some visitors from afar. Extra respect to our visitor, Harry Edwards for running 5k faster than I can without one of those!!

The full results and a complete event history can be found on the Beeston parkrun Results Page.

It was also a day of birthday Celebrations, including Paul Hartshorn who was celebrating a landmark with us, with .... Celebrations - and a definite spring in his step! – 50 T-shirt is in the post Paul! 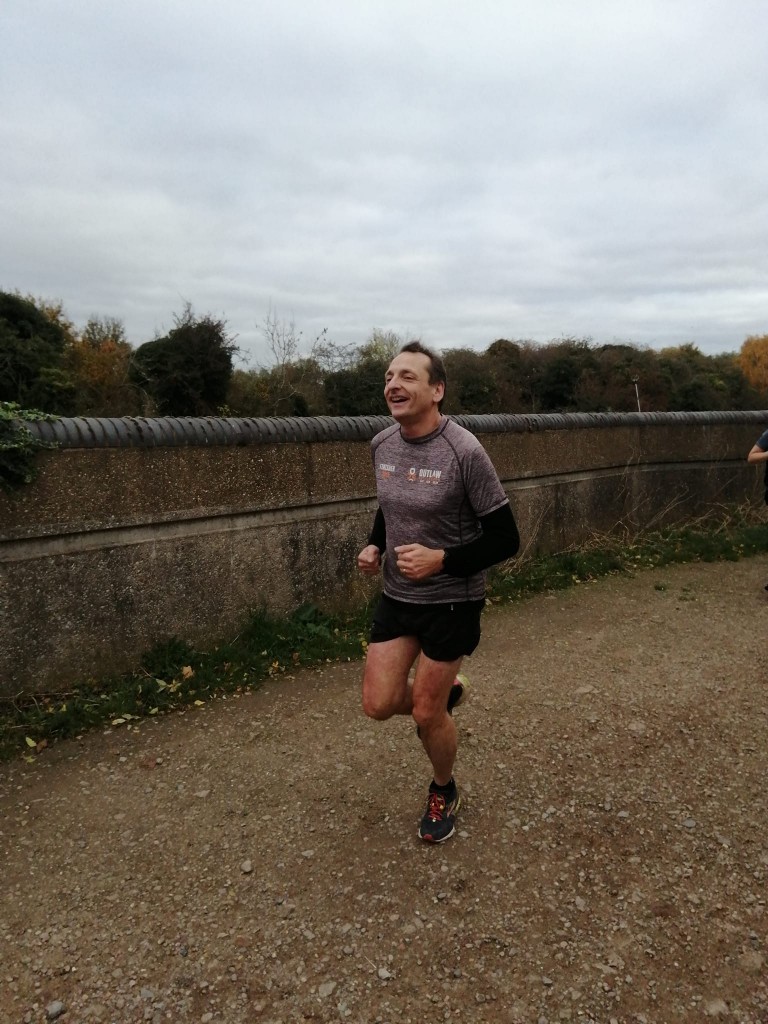 As my first outing as run director, properly solo it was great to have the support of a great team of volunteers. This week it was good to welcome some new faces to the Beeston Parkrun roster, including several students partaking in the Duke of Edinburgh scheme, who took to the roles seamlessly. It was also great to see some familiar faces smashing it in different roles to what they are used to around the course and at the finishing funnel!

The event was made possible by 24 volunteers this week:

If anyone fancies helping out in the next few weeks we have plenty of roles to fill – check out the roster here:

It just remains for me to wish you all a great week and we look forward to seeing you all back at Beeston Parkrun soon.

Next week you will be in the very capable hands of Chris Birley!

We welcomed some old and new friends to the Weirfields this weekend, including many from Long Eaton parkrun and a guest appearance from a fellow Run Director at Blickling Parkrun, Norfolk!

Most notable was our old friend the headwind who made its presence felt from the start, contributing first to some pretty startling feedback during the run briefing as it howled across the (just about dry now) PA speaker and microphone! In spite of this, 40 recorded new Personal Bests – something of a miracle considering!

Thankfully the rain and hail did not make an appearance this week and 273 people ran, jogged and walked the course, of whom 30 were first timers and Representatives of 28 different clubs took part.

Today's full results and a complete event history can be found on the Beeston parkrun Results Page.

It was also a day of Celebrations (and Quality Street) with some awesome volunteering and running landmarks. Big shout outs go to:

Sarah Jane Prior – Congratulations, and a big thankyou for hitting 50 volunteering stints at parkrun!

Pat Allen – One of our local heroes and regular Beeston AC supporters who is always on hand to provide support and encouragement at numerous running events and parkruns for everyone with her husband, Ken. Today Pat marked her 250th Parkrun so it is our turn to show her our support with a massive congratulations!!! 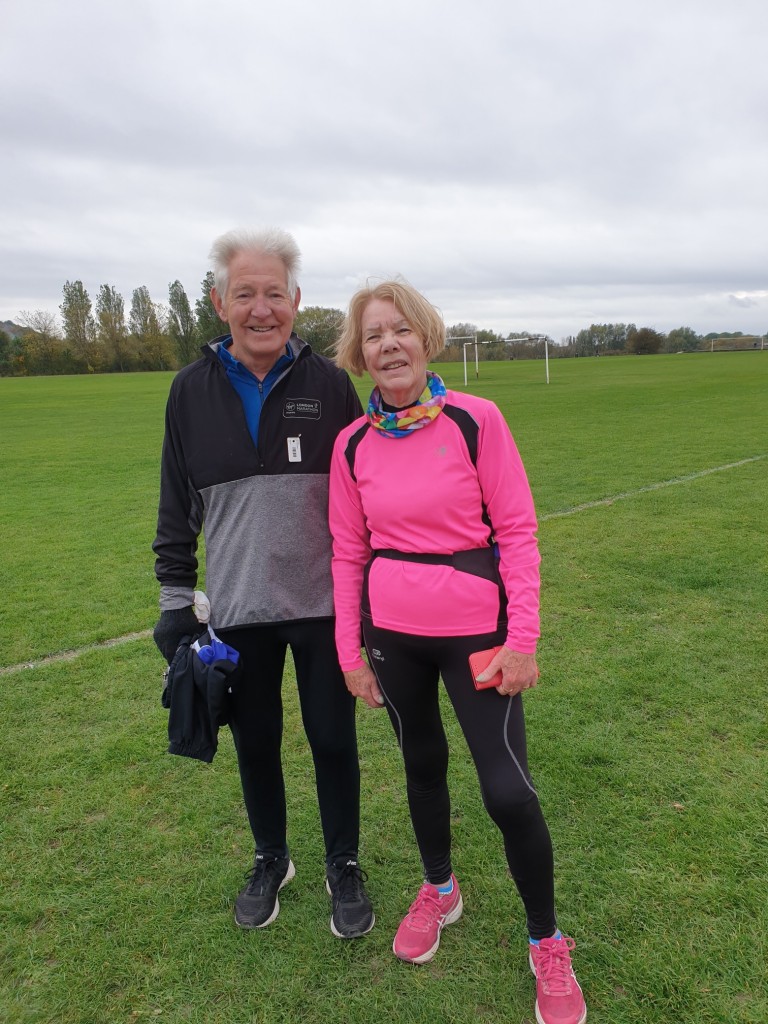 Massive thanks to our team of awesome and dedicated volunteers, without whom Beeston Parkrun could not take place – By the way, we still have plenty of gaps to fill over the next few weeks, so if anyone fancies a go at any of the roles, please have a look at our volunteering page here:

or e-mail us at

Have a good week everyone. We hope to see you all at Weirfields again soon.

So now it's November, the John Lewis ad is on TV and the mince pies have been in Sainsbury's since the end of August, we can officially announce our parkrun plans for Christmas 2021.

For those of you who haven't noticed already, Christmas Day falls on a Saturday this year so here's the plan for parkrunning at Beeston over the Festive period:

So there will be plenty of opportunity to wear your Christmas leggings and your Christmas jumper/Santa costume with us here at Beeston during December.  We'll be in touch with more details in the coming weeks. 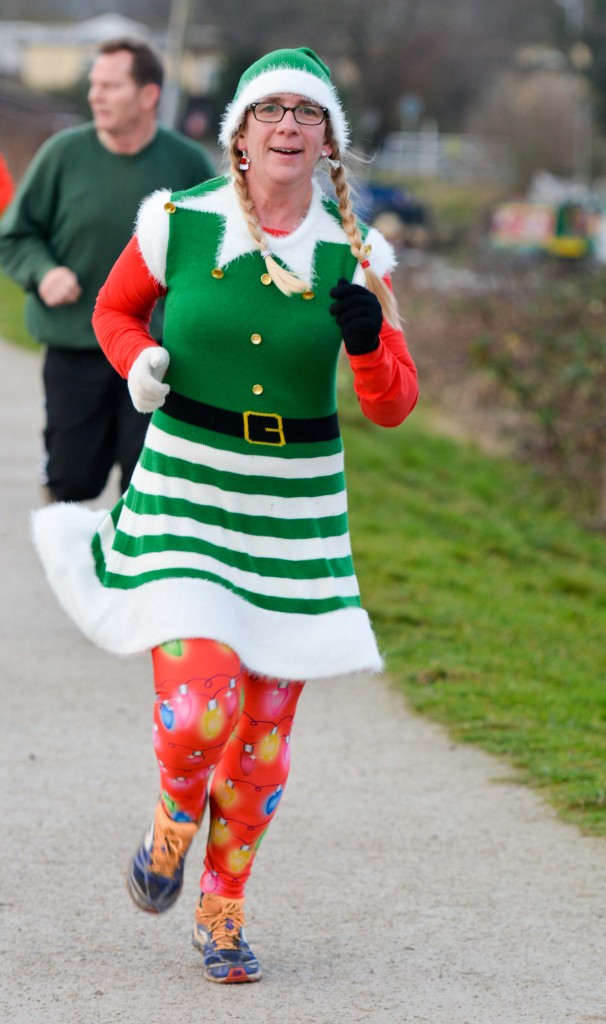 Saturday's parkrun *may* have been the wettest parkrun in Beeston's illustrious 324 event history. There. I am putting it out there. It seems quite astonishing given those conditions that there were no fewer then 238 athletes who walked, jogged, run, waded and swum the course, ably and heroically assisted by 25 volunteers, some of whom may have actually dried out by now!

To the 32 First timers to Beeston parkrun: no, it's not normally like that. To the 20 who recorded Personal Bests: wow. 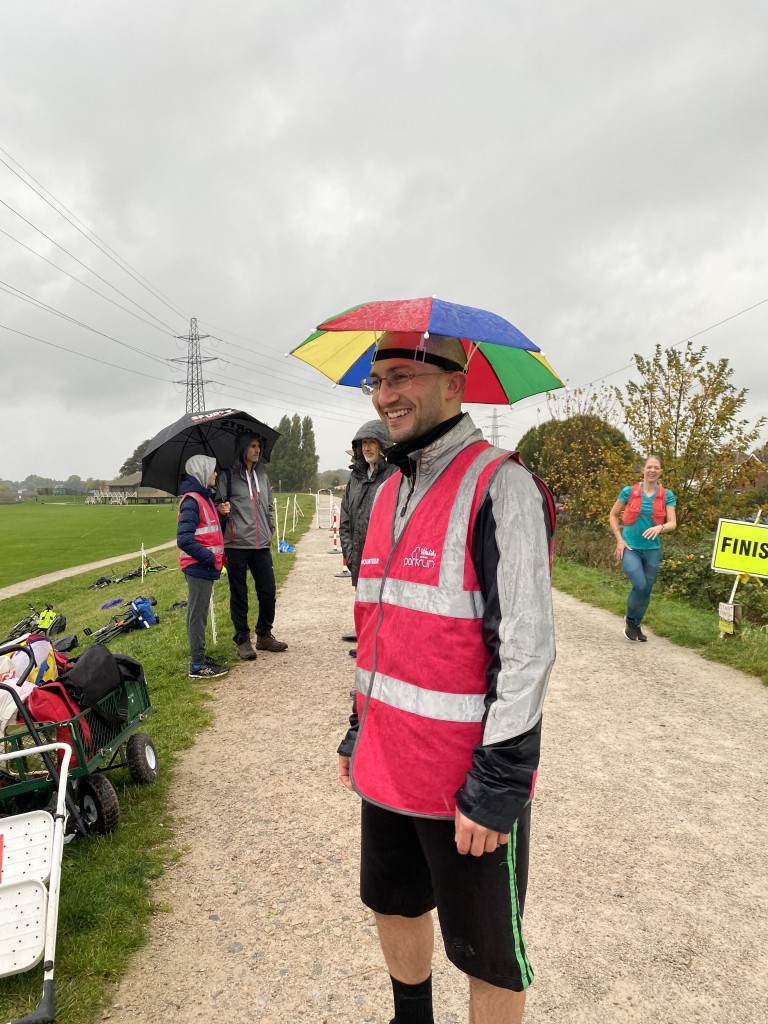 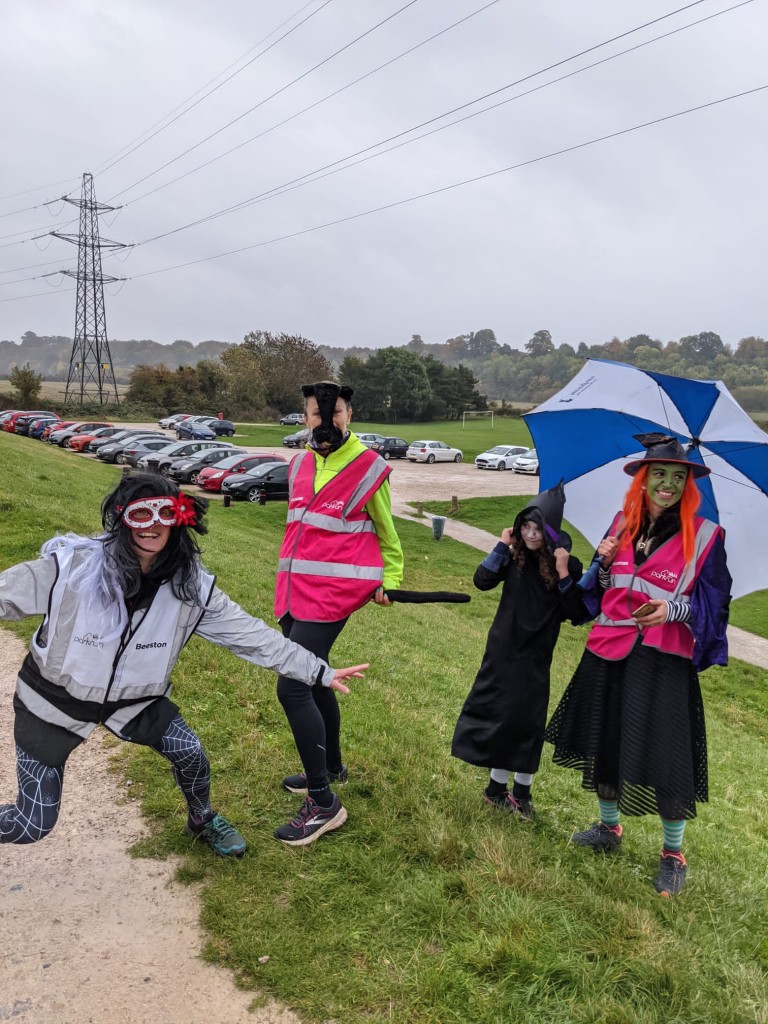 You too can join the smiley pink high-vis gang and look happy singing and dancing in the rain, just email Beeston parkrun Towers on beeston@parkrun.com and we will happily assign you a pink vis.

And just before anyone asks: the pink vests have been washed since Saturday and smell lovely and are drying in the garden quite nicely 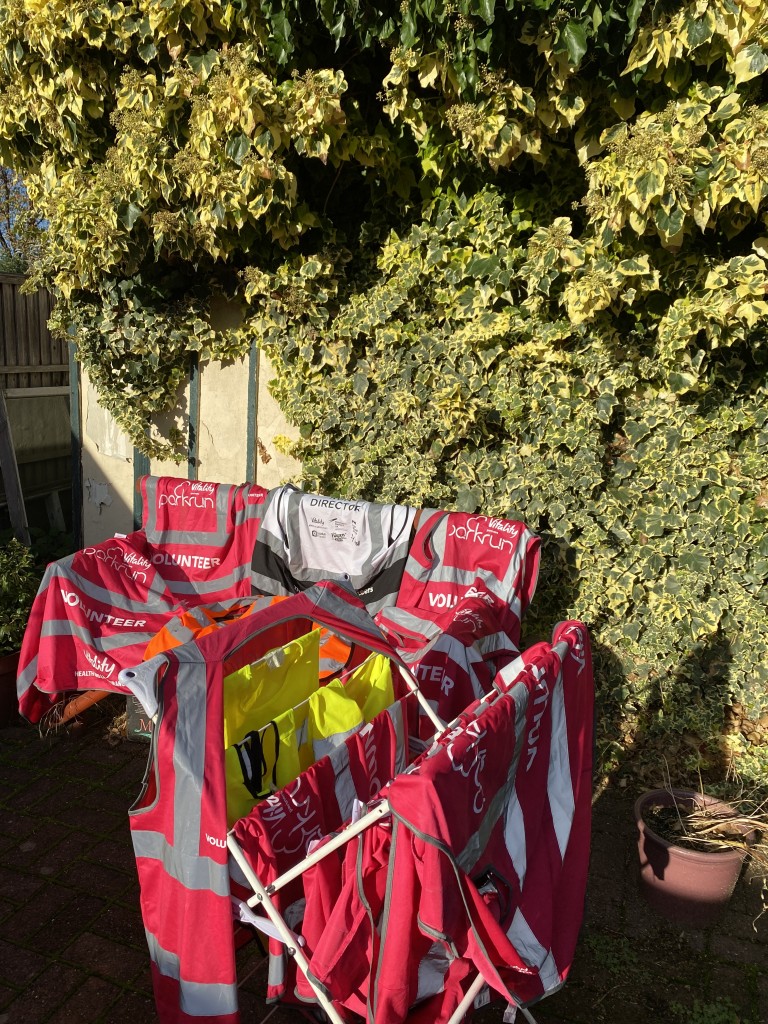 But enough of the weather on Saturday (I did mention it was wet), let's discuss milestones and other nice things! First mention goes to Catherine SIMKINS, our tail walker on Saturday, here ably assisted by some scary ghouls, who did her 200th parkrun at Beeston. Yes, Catherine joins the Beeston ADCOCK Club of parkrunners who have done 200 of their parkruns at Beeston. Subsequent to his running 200 parkruns at Beeston, Nigel ventured to another parkrun once, but has since returned to the safety of the Weirfield. Catherina apparently has no intention at the moment of straying away from Beeston. We shall keep you informed.

A big shout out also to Gill BEVINGTON who reached her 50 volunteering milestone, and to Katie GARDNER for earning the Junior 10 shirt. Marie McLoone earner her red  50 shirt  and all eyes are on Pat Allen who completed her 249th run/jog/walk/swim on Saturday, so is one event away from earning the teal 250 shirt!

But there is one more mileston to celebrate: let's hear it for Trina BEAUMONT who on Saturday earned her 100 shirt. Who is Trina, you may ask? Well, let me tell you a bit about Trina. She has run 95 of her 100 parkruns at Beeston and first joined the Beeston parkrun family on 17th June 2016. In addition to completing the course 100 times, Trina has also volunteered on 59 occasions, once as a marhsal, and 58 times to provide Sign Language Support! Trina herself has climbed that wobbly ladder 58 times to sign the run director's run brief 58 times, and in addition has trained the other Sign Language volunteers at Beeston to provide support to the run directors and to sign the main run brief as well as the First Timers' briefing. It is rare indeed that a week passes at Beeston parkrun without Sign Language Support. Trina and her team have enabled Beeston to be one of a group of very few parkruns who can offer this service to their parkrunenrs, and surely that deserves a special cheer! parkrun set up the PROVE project in 2018 to look at improving accessibility to parkrun for all runners, and for Beeston, Trina and her team of volunteers have been a vital part in making our beloved parkrun just that little bit more welcoming to all parkrunners. The link above gives access to some nice videos and resources including a signed run briefing.

Right, signing off for a few weeks and passing the run director baton to the very amazing Steve Brown who would be delighted, actually, ecstatic, if you wanted to join the high-vis gang, so drop him an email at Beeston Towers.