I make no apology for this being a longer run report than normal, event 1 was spectacular and we have lots of people to thank.

It’s taken 18 months to get to today and we could not have done it without the support of Beverley Pasture Masters and East Riding of Yorkshire Council. The Pasture Masters gave us permission to hold our parkrun on the wonderful Westwood Pasture and the council has funded the start-up costs from commuted sums. 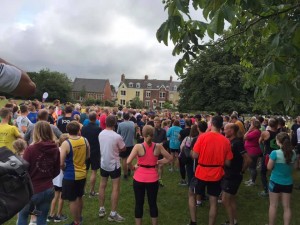 We’ve also received donations from Beverley Athletic Club, Drax, Sir James Reckitt Charity and William Jackson Group.  We’re going to use this money to pay for additional equipment. We’d also like to thank Paul Tremere, our local parkrun Ambassador, Frank Jones, our regional parkrun ambassador, and staff at parkrun HQ for all their support and advice over the last 18 months.

Initial feedback was essentially that it was brilliant, people found the course challenging but there were lots of smiles as they finished. People complimented the cheery marshals with lots of mentions for Oliver and his cow bell cheering on runners as they passed him. Oliver is the grandson of the chair of the Pasture Masters. His Mum said he'd had a great time. Our volunteer Overlord, Nick, commented “Oliver listened carefully to the marshalling instructions I gave him - he’s now in charge of that bell. He was brilliant.”

We must make an offering to the weather gods whom gave us  a sprinkling of rain before and after, but nil during. I’ve put an order in for this weather every week, let’s see how that pans out in December though!!

There were some raised eyebrows about the cows on arrival of a few visitors  to our course, I suspect there are not many parkruns with a Cow Risk Assessment, however the cows were great and our marshals even named a few - Pat, Parsley and Pie behaved beautifully. So anyone afraid of cows should consider this. The only stampede was the one to the pub afterwards! 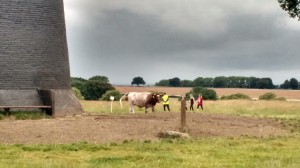 The Woolpack - with a change of landlord mid week this could have gone horribly wrong however Dave and Jane did us proud. They opened early and we can see this being the start of a beautiful parkrun relationship with them. I would also take this opportunity to thank the outgoing landlord, Paul, who hosted many of our meetings over the last year or so.

A massive thanks to the runners and walkers, lots of smiles, great comments and for really, most importantly for us, respecting our parkrun location. By 10.30am you would never have known that close to 500 people had been in the area. It was also great to hear that many of our visitors and runners frequented the cafes in the town too.

Finally a massive thank you to the Farrow family, the Moore family, the Frere family, the Gadie family and the Barrett family. Without their love and support we would not have been able to bring you Beverley Westwood parkrun.

So, with the thanks out of the way let’s check out the stats for week 1.

Despite it being a secret we saw 419 people run, jog and walk the course. Everyone recorded a PB for our course, however, as you would expect for a course of our type there were no parkrun PBs but having said this Mr Pontefract (sorry I didn’t get his name) did get a PB for this year so congratulations to him.   Representatives of 39 different clubs took part bringing visitors from far and wide including Hull, York, Driffield, Scarborough, Goole, Bradford, Pontefract and even Germany via Maidenhead!

A massive thank you to our volunteers, the event was made possible by 38 HighVis Heroes:

The male record has been set by Gregan CLARKSON who recorded a time of 17:05, this was no mean feat bearing in mind Gregan took part in a local 10k the night before.

The female record has been set by Emma GREENSMITH who recorded a time of 22:21.

The record for completing BWpr on crutches goes to the fantastic Sarah TOCK who finished in an astonishing 1:06:05, I’m fairly sure that record will stand for quite some time!

Many congratulations to all four of our record holders

We had a number of people reaching some fabulous pr milestones, a shout out to the following:

Thank you for sharing your milestone runs with us.

Thank you to all that have made it to the end of this epic report, it was an epic day made epic by epic people. I would like to leave you with a quote from one of our volunteers, Christine Whitehouse,  which about sums it up “Something wonderful happens when a group of people have a great idea and a big crowd of like-minded people agree!”.

Lots of BWp love to you all,
Louise

PS: I have a hoodie in the lost property box, if it is yours let me know.