With the shutdown of parkrun what could you be doing on a Saturday at 9am? Well there is always the parkrun Quiz!!

With no parkrun due to the COVID-19 restrictions, there was a new experience for all of us.

The lovely Vassos Alexander hosted a quiz at 9am on the parkrun YouTube channel. Over 2,700 people were viewing the Europe and South Africa edition at 9am GMT (with Australia/New Zealand having gone 11 hours before and North America going 5 hours later).

The questions were difficult, but some of our Black Park parkrunners did rather well. The best scores that we have heard so far were all 8 out of 15 (with the top 10 in Europe/South Africa scoring 11 and 12). Some of the UK teams were so keen that they had even participated in the Antipodean version before bedtime and were planning to join the American version too!

Well done to Black Park parkrunners Richard GOWER, the JARDELLA family and the MITCHELL family. Neck and neck at the finish line this week.

And the good news is that you too can watch it back to join in the fun, and get online next Saturday morning for the Great Big parkrun Quiz #2. Just search for the ‘parkrun’ channel on YouTube and the Live broadcast should be the first item at that time.
JZ 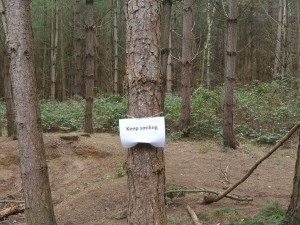 I managed a freedom run before the park closed completely last week. It was very quiet and calm and the parkrun course was deserted. It will be there when we get the chance to return.

All parkrun events in the United Kingdom have been suspended with immediate effect due to the ongoing COVID-19 (Coronavirus) situation. At this stage parkrun HQ have cancelled all events up to the end of March. In these uncertain times we cannot say when the runs will restart, so please keep an eye on the parkrun websites, social media etc, and we will be back as soon as it is safe to do so.

In the meantime, remaining active is incredibly important, and parkrun are working on ways to encourage and support that. We do ask however that you do not arrange group gatherings at Black Park whilst parkrun events are suspended. The events have been cancelled to help reduce the spread of the virus, and arranging your own group runs will counteract these efforts. Don't let the virus stop you running or walking, just do it safely on your own.

Stay safe everyone and we will see you once we are out the other side of this.

This week at Black Park, 545 people ran, jogged and walked our fabulous course, of whom 34 were first timers and 54 recorded new Personal Bests (congratulations!). Representatives of 34 different clubs took part.
Recently, due to COVID-19 we have seen the cancellation of many large events. As the situation progresses, we advise you to check the Parkrun website for any information-you will also get an email notifying you of any changes. You can also check the Parkrun social media.
The park was beautiful, leading to a fabulous run. The atmosphere was extremely positive in what is a very unsettling time for some, and we need to keep that up in the coming weeks! Kindness really makes a difference, so maybe check in on your relatives or friends and offer some support if they aren’t feeling their best (here is some advice about mental health and wellbeing).
A big thank you to our 26 Hi-Viz Heroes this week, as we would have no Parkrun without them:
David PRIDDY • Andy TORRANCE • Ian SMALES • Zoe SMITH • Freya SMITH • David COOMBS • David MCSHANE • Chloe BREAGAN • Melanie Louise RATCLIFFE • Raymond John HOYLE • Suzy GAULTON • Adam HORSFIELD • Steve HORSFIELD • Audrey PARSONS • Marianne HUGHES • Richard GOBLE • Joe HARVEY • Lotte VISSER • Martin STEWART • Sam PHILLIPS • Elinor CASEY • Marie KOUHI • Harry GOWER • Alison THORPE • Sumayah SIDDIQI • John TOBIN
This week’s milestones-congratulations to everyone!
50 Club-Caroline WALSH, Donald PATERSON, John DOBBS, Sarah QUANTRILL
100 Club-Anne LEIGH, Christopher BEAVIS, Linda GAITSKELL, Nyree STEWART-BEAVIS
250 Club-Charlie EDWARDS, Hilary GRANT, Malcolm UNDERHILL
25th Volunteer-Richard GOBLE
Today's full results and a complete event history can be found on the Black Park parkrun Results Page.
The male record is held by Ben LIVESEY who recorded a time of 15:09 on 10th March 2012 (event number 140).
The female record is held by Pippa WOOLVEN who recorded a time of 16:32 on 5th January 2019 (event number 502).
The Age Grade course record is held by Margaret MOODY who recorded 92.51% (22:15) on 5th April 2014 (event number 250).
Black Park parkrun started on 18th July 2009. Since then 21,587 participants have completed 233,710 parkruns covering a total distance of 1,168,550 km, including 34,704 new Personal Bests. A total of 864 individuals have volunteered 11,300 times.

Black Park was one of the parkruns across the world celebrating women’s participation as a part of International Women’s Day. Loads of people had turned up wearing purple in recognition of this and the request to ‘bring a woman!’ had gone out – in recognition of the parkrun research that shows more girls and women sign up but then worry about what is involved and struggle to overcome these concerns to get along to their first run. There was a brilliant vibe and as Run Director it was wonderful to see over 330 women all doing 5K their way and loving it (and thanks to the men for their support and kindness – it really does make a difference!)

It was also pacer day and Joe’s flying pacer squad were there covering every minute from 23 minute through to 40 minutes in their stylish blue pacer tabards. Their encouragement and support led to an incredible 99 PBs! Well done to everyone and thank you to the pacers.

It was also a very special day because it was the 80th birthday of regular runner Anne LEIGH, and her son Mike (25 minute pacer) and all of her friends had made sure that the day was marked in style. Do have a look at the lovely video from Logathas VELAYUTHAPILLAI posted on the Black Park parkrun Facebook page to see the celebrations, plus the inspiration that Anne brings to everyone around her.

This week 730 people ran, jogged and walked the course, of whom 71 were first timers. Representatives of 41 different clubs took part, with all of the local clubs represented and also people from Clubs farther afield: Cleethorpes & District AC, Brighton Outdoor Fitness and Manchester YMCA Harriers Club.

The things that people are chatting about

It was a great day and people were buzzing – whether it was Anne’s birthday cake, celebrating PBss, International Women’s Day or congratulating the MITCHELL family with Stephen completing his 250th parkrun with all of his family (including his elder daughter who had left home at 6am to travel by public transport to get here to mark Dad’s special moment).

The thing about parkrun is that it is just as much about the coffee and the chat afterwards (with friends old and new) as it is about the 5K itself. A couple of things that came up in conversation were:

Parkrun has now registered as a charity in order to support the work of staying weekly, timed and free forever whilst also growing across the world and getting more people in every community involved. If you wanted to directly support this work, you can make a monthly donation via ‘parkrun forever and you even get entered into a free monthly draw for parkrun prizes!

You can read more about it here: https://parkrunforever.com/about/

2) Representing your country at the 5K distance in the Vitality World Cup – for free!

This challenge is an online challenge and TeamUK is captained by Jess Ennis-Hill, so some of our parkrunners are putting in the miles in pursuit of glory!

You can read more about it and register here if you want to: https://runningworldcup.com/?ref=puouhn

Well done to our new members to the parkrun milestone clubs this week:

Today’s parkrun was all made possible by 64 volunteers – a big cheer for them:

The full results can be seen on the Black Park results page: https://www.parkrun.org.uk/blackpark/results/weeklyresults/?runSeqNumber=563

And the wonderful #IWDparkrun photos with all of the birthday celebrations and pacer fun, plus your individual experience can be seen on the Flickr link:

There was some very impressive running at the front of the field, with two of the top three finishers recording PBs – including first finisher Andrew HUMPHREY (SM25-29) of Burnham Joggers in a speedy 17:40 and Bob FURNELL (SM30-34) in 18:08. Also a big shout-out to Cookham Running Club, as seven of their members all recorded PBs.

Here are the age graded results that deserved a huge cheer (age grading is a scoring vs the best time for that age and gender over 5K):

Although the amazing Margaret Moody still holds the course record of 92.5% set back in April 2014.

If you would like to tell a little of your personal story, please do email parkrunstories@yahoo.com and we will hopefully catch up with you at Black Park and feature your story.

Congratulations to all of the 374 people who ran, jogged and walked the course this week; you have all taken part in a Parkrun first.  Since it began in 2004, the 29th of February has never fallen on a Saturday, so this was the first ever ‘leap run’!

Compared to recent events, turnout was quite a bit lower, no doubt thanks to the very wet weather! But despite weather more suited to ducks, 24 brave folks recorded their first ever run at Black Park and discovered a well-kept secret; it rarely ever rains at 9am on a Saturday. Sure enough this week was no exception, the rain cleared just in time to make conditions for the run actually rather nice (if a little muddy).

This week 4 runners celebrated their entrance to the coveted milestone clubs. Carol Coombs recorded her 400th Parkrun; 394 of those runs were completed at Black Park, so that’s 1,970 KM of the 4,000 KM that make up 400 runs! Mairi and Anthony Vodden crossed the finish line together, both completing their 100th Parkrun. They celebrated with the obligatory cake and I can personally confirm it was very tasty. And finally, Oliver Watson earned his first milestone t-shirt with 10 Parkruns under his belt. Congratulations to you all.

A special mention to Zippy Grice from Portsmouth Triathletes, the second male over the line this week who recorded a new PB.

Now for a couple of ‘leap’ stats; the 29th person over the line was Weeraphon Thongchumsaend (with a new PB too! Congratulations). And very satisfyingly, on the 29th day of the 2nd month, Sally Vigurs came over the line in 29:02

Now for a friendly reminder; could all runners please double check that their shoelaces are securely fastened before the start. Runners are reporting a fair few people running with shoelaces that have come undone, and as the Black Park course covers lots of stony paths it’s very unforgiving of runners who face plant the ground. So please, save your faces and tie your laces!

Finally, next Saturday Parkrun is participating in International Women’s day. Statistics show that women are more likely to worry about taking part, so Parkrun would love everyone to encourage female friends and relatives to come along and run/walk their first Parkrun. To celebrate women’s participation in the voting process, purple (the colour of the suffragettes) has been chosen as the colour to wear.

A huge thank you to our heroes in high-vis:

Congratulations to all those that joined a new milestone this week.

Andrew PENFOLD (VM45-49) of Farnham Common Joggers and Wheelers was first over the line in 17:30

Zippy GRICE (VM45-49) of Portsmouth Triathletes was second over the line in 18:32

The three highest age grades were recorded by: