For some people the weekend between Christmas and New Year is a time for relaxing but not for the 636 people who ran, jogged or walked our Parkrun this week. After the rain of the last couple of days, this morning was dry and fair - great December running weather. In fact, the weather was so good that it tempted Father Christmas back from the beach for one last run this year. Some of you may have seen him with his mini sleigh and his two helpers. They weren’t just at Black Park to run off those extra Christmas pounds, they handed out presents to all the volunteers.

On behalf of all the volunteers, we want to thank you for the generous gifts you gave, it was so thoughtful of you. It wasn’t just Father Christmas who thanked the volunteers, so many of you runners thanked us especially in the funnel as you got your tokens.

We don’t volunteer to be thanked, we volunteer because we love meeting all you runners and so that Parkrun can function as efficiently as possible on a weekly basis. Why don’t you consider volunteering in 2020? It’s a great way to meet people and, if like me, you start towards the back of the field you get to see what the front looks like. In addition, you get to see all the runners and be part of a great team.

Of the 636 people ran, jogged and walked the course, 66 were first timers and 56 recorded new Personal Bests. Representatives of 46 different clubs took part.

Black Park parkrun will be operating as usual on Saturday December 21st & 28th, and there will also be an additional run at 9am on New Year's Day. There are currently no plans for an additional run on Christmas Day.

For event #442 it seemed as though winter had arrived, there were a lot more long sleeves and gloves this week. However, cold weather does not deter the hardy runners who make up the Black Park park runners and 550 ran this week.

For one runner it was her last time as a Black Park regular as next week she is moving to Hampshire. Karen Sinclair has been running at Black Park since 2012 and this week marked her 130th park run, 110 of which have been completed with us. When I caught up with Karen, I asked her if the fact that Alice Holt park run was going to be only a few miles from her new home had influenced her decision to buy her particular house. “Well, it was certainly one factor” she replied without missing a beat. “I looked at some properties and towns and if the nearest park run was more than 10 miles away that property was off the list.” Park run is such a fixture in peoples’ lives that it can influence more than what time they set the alarm for on a Saturday morning. We wish Karen all the best in her new home and at her new park run.

A fantastic run
Huge congratulations to our first female finisher today, Orla Williams who ran 19:16 which equalled the JW11-14 age category record for Black Park. She was very happy with this run. 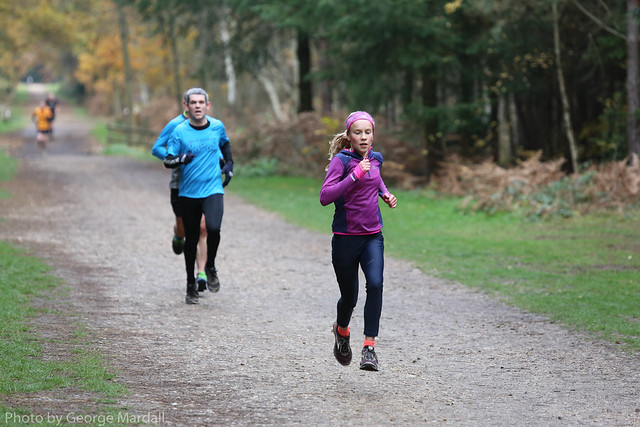 Christmas and New Year Runs
Christmas is fast approaching and with it our running schedule.

Various other local events may be running on Christmas Day and New Year’s Day, you can check the list here:
http://www.parkrun.org.uk/christmas-compendium/

This week 550 people ran, jogged and walked the course, of whom 23 were first timers and 63 recorded new Personal Bests. Representatives of 30 different clubs took part.

The event was made possible by 24 amazing volunteers:

Please note that Black Park parkrun will be operating as usual on Saturday December 24th and Saturday December 31st. There will not be an additional run on Christmas Day, but there will be an extra event on Sunday January 1st at 9am. And for those of you desperate for a double you can then make your way to Upton Court where they will be starting at 10:30.

If you're wanting a Christmas Day run then please check out the Christmas Compendium for a list of the events that are running.

As in previous years, there will not be an additional Christmas Day parkrun event at Black Park this year. There will however be an additional run on New Years Day at 9am, followed by the option of a cheeky second run at Upton Court at 10:30. And for those of you who like a bit of extra distance, there is usually a group that does both events but also runs between Black Park and Upton Court.