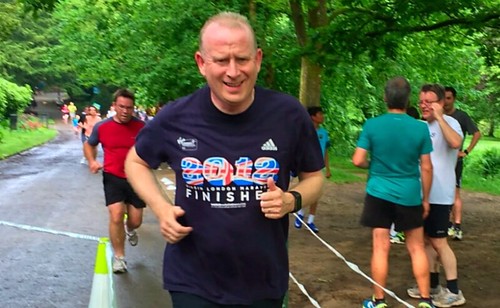 In this week’s newsletter, Graham Evans MP tells us about his love of running, and we have news of two exciting new partnerships.

Graham Evans MP is the Chair of the All-Party Parliamentary Group for Running. The purpose of the group is to encourage running as a sport nationally, support constituency running and athletics clubs, and help employers and businesses of all sizes to encourage running in the workplace. Graham tells us why he is so passionate about promoting parkrun.

“I have always been interested in running and keeping fit. When I was growing up in Poynton I would run along the beautiful Midland Way and around Lyme Park.

I first heard about parkrun from my wife, Cheryl, and it appealed because it was something we could do together as a family. Our first parkrun was brilliant, and the whole family have been hooked ever since. I love the fact that you can just turn up to a free event aimed entirely at getting you out into the fresh air and off the sofa. It’s suitable for all ages and all abilities and there are parkruns to take part in across the country.

I spend most of the week down in London, which limits the number of times I can get out for a run. Parliament is a massive place with so many corridors, staircases and halls to cross and my Fitbit tells me I do about 16,000 steps on a normal day of running around to meetings and votes; but then I try to get at least one or two proper runs in when I’m down there. At home during the weekend, constituency work permitting, we tend to go to Bramhall parkrun as a family. My children are very proficient runners and we all really enjoy getting out in the fresh air and running together as a family.

I’m also the Chair of the All-Party Parliamentary Running Group, which seeks to play a part in making this a healthier, fitter country by raising the profile of running with MPs, opinion formers, and within our constituencies. Because parkrun is all about encouraging people to lead more active lifestyles, I try to promote it as much as possible. We usually take part in Bramhall parkrun, but other local events to us are Lyme Park, Wilmslow, Delamere and Marple.

In an age when we are all concerned about the nation’s growing obesity problem, I view parkruns and running in general as a terrific way to help us all become a little less like couch potatoes! I’m also a massive fan of junior parkrun and school running projects that encourage young people to run every day and become more active. As with so many things it’s all about education, and if we can help children enjoy running and understand the benefits of it at an early age this can only help them later on in life.

In the long term I believe that a more active nation produces a more successful one, and one that will ultimately put less strain on our NHS. Running is a wonderful way to get out in the open, get fit, and speaking from a personal point of view it offers me a period of time where I can think away from phone calls, meetings and all the pressures that go along with being an MP.

I encourage everyone to get involved with their local parkrun – as runners, joggers, walkers and volunteers!" 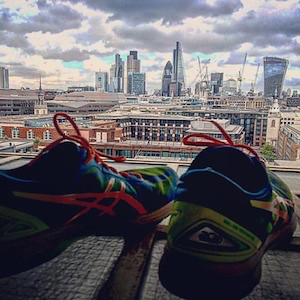 Intersport: Last week Intersport teamed up with ASICS to offer parkrunners a free pair of limited edition ASICS headphones to pick up in store or via Instagram #ShoeWithAView @intersport.co.uk.

Thank you so much to everyone who got involved – over 600 pictures were posted online in the first few days and we have enjoyed meeting lots of you in store as you’ve been popping in with your parkrun barcode to claim your exclusive pair of headphones.

We were overwhelmed with the response and despite having 10,000 pairs to give away, it meant that we unfortunately couldn’t supply headphones to everyone who visited our stores or who posted a photo. Our apologies to those who missed out.  It has however proved what a great running community parkrun is (which we obviously already knew!), with all your pictures coming in to Instagram of your ASICS #ShoeWithAView.

We’ve loved seeing your favourite running spots, from cities and beaches to woods and hills! The first 100 entrants who uploaded a photo of their running shoes tagging @intersport.co.uk in and including #ShoeWithAView received a free pair of headphones in the post.

Remember that you can claim 10% off at Intersport as part of our ongoing parkrun partnership price #PPP*. Simply show your parkrun barcode in store (#DFYB!) to claim 10% off running products or use code PARKRUN10 to claim 10% off your entire order online at www.intersport.co.uk**

We are always on hand with plenty of expert advice from tips about running through to gait analysis to find your perfect shoe, find your nearest store here. Make sure that you keep sending us your pictures via Twitter @Intersport_UK and Instagram @intersport.co.uk with #loveparkrun and like us on Facebook.

See you at your next parkrun!

*PPP valid at all participating Intersport stores; see our website for details. ** Not to be used in conjunction with any other offer or promotion. 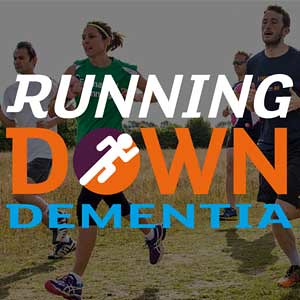 ARUK: If you’re one of nearly 4,000 wonderful runners taking part in Running Down Dementia we’ve got a few updates for you.

Firstly, the campaign will sadly be drawing to a close on Monday 31 October. But the good news is that it means you still have over six weeks to get to your £100 and 100km targets! And better still, Running Down Dementia is going out with a bang as Alzheimer’s Research UK staff plan to join you at six selected parkruns throughout the country on Saturday 29 October as you clock up your final kilometres.

The six parkruns will be spread over the country across the following regions: London, Cambridge, Durham, Yorkshire, Scotland and the Midlands, keep your eyes on our Facebook page for more information. We’d love you all to join us at one of the parkruns in your Running Down Dementia t-shirts. If you still don’t have one you can buy one here.

If you go to the Running Down Dementia website you’ll now be able to see a few changes we’ve made. The first is the new countdown clock which gives you all a reminder of how long you have left to complete the challenge.

The second thing we’ve added is our new wall of fame – The 100km Club. The 100km Club features all those who have run over 100km or are near to crossing the finishing line, along with how much they’ve raised for the challenge to date. We know how hard all of you have worked and we’d like to reward you all with some well-deserved recognition for all you’ve done to help dementia research. 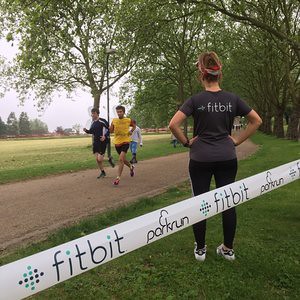 so many ways to run 5k

Fitbit: 5k. Five kilometres. Five thousand metres. It sounds like a lot, right? It doesn’t have to. Despite how daunting it may sound, almost anyone can run 5k. Yes, that includes you too! And of course a parkrun is a 5k.

It can be a starting point, a way to mix up an existing routine or a harder push. A 5k can be used in so many ways, so whether you’ve never run before or are looking to give your training that extra push, here’s how you can use a 5k, whatever stage you’re at.

Ideal for beginners: Aiming to run 5k without stopping is a great first goal for runners. By training towards this goal and slowly reaching it you’ll establish pace and breathing as well as maintaining an elevated heart rate. Pick up the pace: When you have a little more experience, try to find a track so that you can run continuously without distractions and run 3-4 ‘warm up’ laps.

Then run a lap at almost your top speed to elevate your heart rate, then rest for the same time it took for you to run that last lap. Repeat this routine 3-4 times. Then recover fully before running a half lap and resting for the rest, and repeating again 3-4 times. This will help to build stamina and endurance for running longer distances.

Try Fartleks, ‘fartlek’ means ‘speed play’ in Swedish. These exercises allow you to experience speed without burning out - try running for 30-60 seconds at a high speed, then slow down to recover your breath, and run hard again. Mix it up with 30 second and 60 second bursts in between resting to keep the variety.

Go long: When running longer distances, aim to run for 60-80 minutes. It’s long enough to tire your large muscle groups, yet still engage the fast-twitch muscle fibres that you need to speed up. You’ll also increase your cardiovascular infrastructure which lets you process more oxygen at a faster pace, making it more efficient for your run.

So now you know! For our full blog on how a 5k can help you, click here. Don’t forget to keep track of your progress with a Fitbit – parkrunners receive an exclusive discount on devices, so take advantage of it and browse the store. 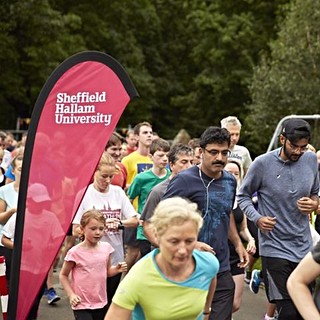 The new partnership, which was launched at Sheffield Hallam parkrun on Saturday, will enable academics at the Advanced Wellbeing Research Centre to look at how parkruns are impacting on health outcomes and conduct research into the nation's physical activity levels.

Click here to read more about the partnership and to watch a short video from the launch event. 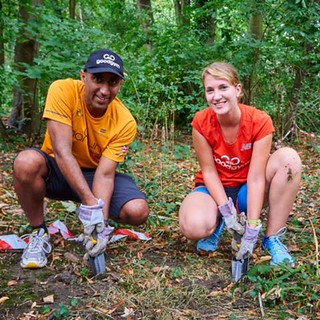 parkrun and GoodGym, two of the UK’s biggest providers of free, organised physical activity and volunteering, have joined forces in an exciting new partnership to extend their positive impact.

GoodGym is a growing movement of runners who combine exercise with helping their communities. Members stop off on runs to support isolated older people, and to do manual labour for local organisations.

Following the partnership launch at Mile End parkrun on Saturday, a group of people ran to Tower Hamlets Cemetery Park and planted 1,500 bulbs and cleared ivy from gravestones.

Further details will be announced shortly, and the full press release is available here. 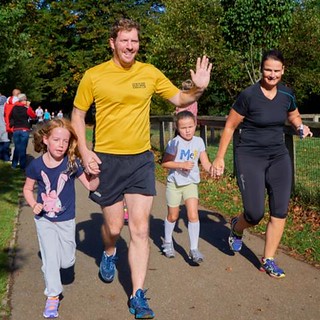 This week’s UK statistics for parkrun and junior parkrun: 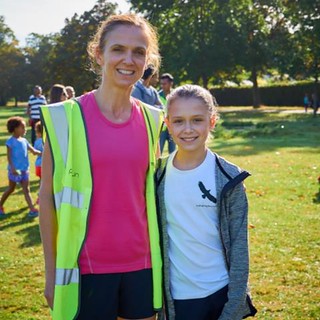 random stat of the week

51.7% of the quarter of a million new walkers, joggers and runners welcomed to UK parkrun events this year have been women and girls.

feedback from the field 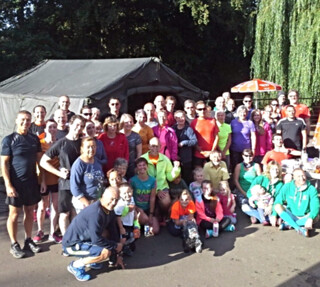 Members of King’s Lynn parkrun gathered together on a wet Saturday to celebrate their fifth anniversary.

Having completed the normal 5k parkrun many continued the theme by launching into a 24-hour Marathon, with runners completing the parkrun course, for an hour of their choosing, until 9am on Sunday.

It proved a very successful event with more than 180 individuals taking part, running 1,288 miles collectively and raising just over £900 towards improvements to the park. 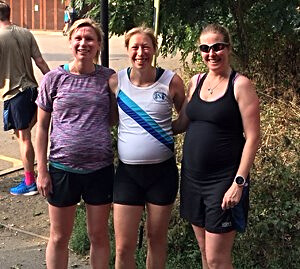 I usually parkrun to chase PBs, but not this year though - I'm now eight months pregnant, and parkrun has helped me embrace a totally different approach to running.

As I've slowed, I'm running in new parts of the Hackney Marshes parkrun pack and thanks to this I've met so many new people and other new parents who've been a great source of information and inspiration, especially those women getting back into it again after giving birth.

It has been great to meet other happy, healthy, preggers and very inspiring parkrunners!

Let us know if you have an interesting parkrun story or photo to share.