Thank you so much to all the people who visited us at the last event on Saturday, we are extremely grateful to all our volunteers for their support over the last 10 months.

We are working to find an alternative location and this will be released in due course. 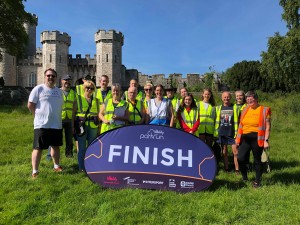 It is with great sadness that we have to announce that next week will be our last parkrun at Bodelwyddan Castle, the castle is closing at the end of the month and therefore we are unable to continue.

We would like to pass on our hearfelt thanks to the staff at the castle who have enabled us to continue over the last few months whilst they have been uncertain about what is happening.

We have got a few ideas about potential sites to move to but it will take a couple of months to get sorted so please bare with us, we can't guarantee a hill though!

Thank you to all our volunteers and parkrunners for their support, and we have made lots of friends over the months.

Next week we hope you will join us for cake and we will be back as soon as we can.

All the best Eva, Sarah and Dave.

So after the shenanigans of the past couple of weeks Bodelwyddan parkrun number twenty got off to a flying start this weekend, with no snow, ice or winds whatsoever, no drainage problems on site, and instead a lovely warm February morning – who knew such a thing was possible!

I’d first intended to come across to Bodelwyddan two weeks back but ended up diverting to Crosby instead as snow cancelled play at the first outing - Having set off from Pontefract this morning fairly early for this one we had an easy journey across – still being slightly paranoid about cancellations, we ended up arriving a tad early (just in case!).

This gave us chance to have a wander round the site and take it all in: 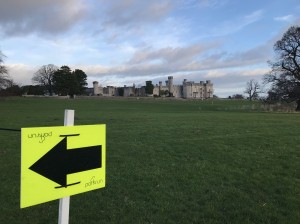 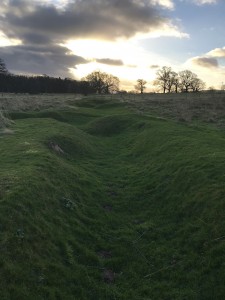 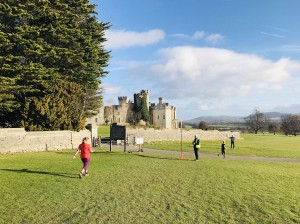 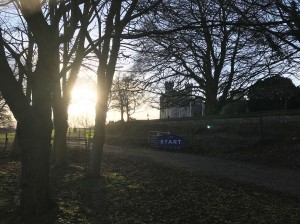 ‘Challenging’ hill up to the wooded section (twice) Most definitely - check!

Really enjoyed the run this morning - you’ve a lovely parkrun community here, Amazing surroundings, great views, and I’ll even forgive the pain of getting back up that hill for the second time for a finish funnel that looks like this.. 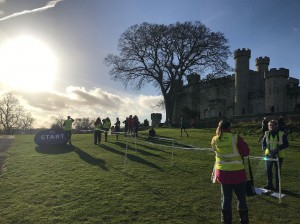 Our First Finisher Bryn WOODALL of Colwyn Bay AAC came through in a superfast 18:06, not only breaking his own PB for the course by over a minute, but also recording the second fastest time since the course record was set at the first event!

The First Female Finisher this morning was Bethan DOWSETT at 20:57 in third position, again setting a course PB and taking nearly 30-seconds off her last run here.

Quite some going here – with both Bryn and Bethan competing in the 15-17 age group – awesome work guys!

Visitors from far and wide this morning – Croydon, South Africa, and West Yorkshire* massively representing today, with runners from Holmfirth Harriers & Hyde Park Harriers** from Leeds making up more than 12% of the field!

*possibly slightly biased but it seemed like a big proportion for Wales!
** this is my club! And I didn’t even realise until the results were published!

This Saturday we welcomed a number of runners from Denbigh based Bace Fitness, the group have finished their 0-5km programme and celebrated by completing our parkrun, well done everyone! Pete your jumper is in our store cupboard 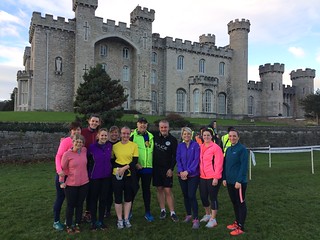 Just a reminder that this weekend, 15th December is our Xmas celebration as we don't return until 12th January, it would be great if people can bring treats and dress up.

This week 87 people ran, jogged and walked the course, of whom 22 were first timers and 22 recorded new Personal Bests. Representatives of 11 different clubs took part.

Bodelwyddan Castle parkrun started on 18th August 2018. Since then 1,003 participants have completed 1,722 parkruns covering a total distance of 8,610 km, including 337 new Personal Bests. A total of 97 individuals have volunteered 258 times.

This weekend saw the start of our new partnership with Ysbyty Glan Clwyd to promote activity and also to build on the social side of running which is very much the ethos of parkrun and Run Wales. We were really pleased to be asked to partner with the hospital to encourage visitors and staff to come along and walk, jog or run with us.

As always our amazing volunteers welcomed all the participants and made them feel part of the family from the outset. We hope to get some running groups started to build on the link so expect to see more people enjoying the fantastic opportunity that parkrun gives.

It certainly was a great morning right from the double rainbow at the start but it was a day for firsts, most notably the female course record was broken by Gemma Moore who recorded a time of 20:35! Well done Gemma.

But importantly well done to everyone for coming, it's great to be able to get to know people's names and see such a difference in many of you over the weeks.

Don't forget it's our Xmas special on 15th so make sure your dress up (including volunteers), donations of mince pies, treats etc most welcome. 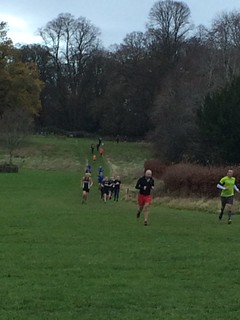 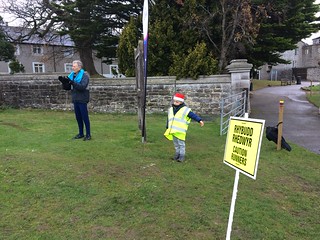 This week 122 people ran, jogged and walked the course, of whom 50 were first timers and 23 recorded new Personal Bests. Representatives of 18 different clubs took part.

The event was made possible by 14 volunteers:

Bodelwyddan Castle parkrun started on 18th August 2018. Since then 981 participants have completed 1,635 parkruns covering a total distance of 8,175 km, including 315 new Personal Bests. A total of 93 individuals have volunteered 242 times.