315 parkrunners took part on Saturday and braved the ‘soft’ conditions – mud pretty much all the way round. 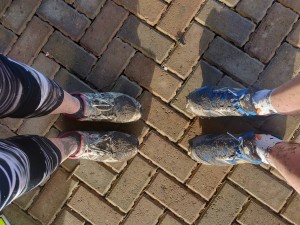 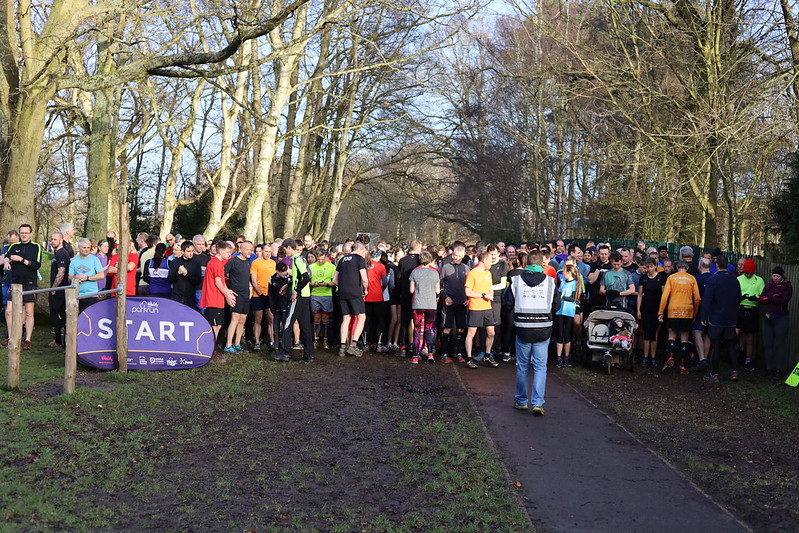 We couldn’t have run without the volunteers so thanks to Andy, Anthony, Callum, Cameron, David, Doug, Eleanor, Emily, Evie, Finley, Heather, Izabelle, Joanna, John, Joshua, Kate, Kerry, Laura, Marcel, Martin, Megan, Mike, Paul, Samantha and Stephanie for marshalling, scanning, timing, setting up and down, pacing, directing and all the other jobs that are needed to stage a parkrun. As always, if you can help, email bracknell@parkrun.com to help.

Welcome to the 11 first timers trying out their first ever parkrun and well done. It’s not always that muddy….. And well done to the 48 people who achieved a personal best (PB) this week, an amazing achievement considering all that mud. 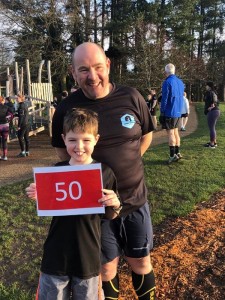 Another junior, Josie also celebrated her 50th parkrun alongside Chris Ashenden who ran his 50th, 44 of which have been in Bracknell. Elayne Faubel completed an unofficial milestone of 200 parkruns too.
Huge congratulations to Jo Everitt who completed her 100th parkrun, also running the majority of her runs at Bracknell. 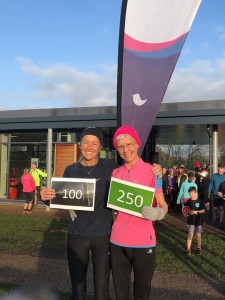 Our biggest milestone achievement this week was Judith Guest who ran her 250th parkrun. Judith started running parkruns in 2014 and although she has run 181 of those at Bracknell, together with husband Robert, she has been working her way through the parkrun alphabet and they have run all but a couple of the hard-to-get letters now, running at 38 different parkruns.

Judith is very well known in the Bracknell parkrun community and is an inspiration to us all, especially those of us who now resort to ‘age grading’ to assess our running as we get older. Judith’s average age grading percentage is 79%, and she regularly achieves age grading of over 80%. To put this in perspective, this is equivalent to an age adjusted 5k time of about 18 minutes for women and 16 minutes for men. So it’s not surprising that Judith holds the age group record at 15 of the 38 parkruns she has run. An amazing achievement. Well done Judith. And thank you for all the volunteering you have done too. 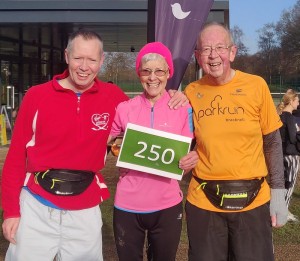 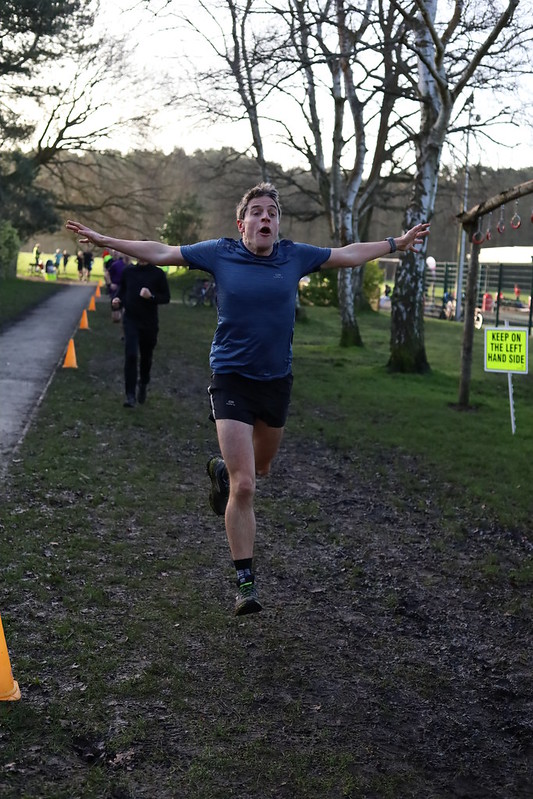 Three years to the day since I ran my first ever parkrun, also at Bracknell, I joined 438 other crazed souls (417 park runners, and 21 volunteers) to get up extra early and participate in run #251 at 8:30am on New Year’s Day.  Like many, this was the first part of a parkrun double header, completing Bracknell before heading off to another course nearby.  As RD Martin asked, “is anyone not going off to Cali afterwards?” (California Country Park), there was very little murmur, and I can confirm a great many of those at Bracknell, runners and volunteers, including Martin, did indeed make the four mile trek over to Cali for the second part of their New Year’s Day Double. 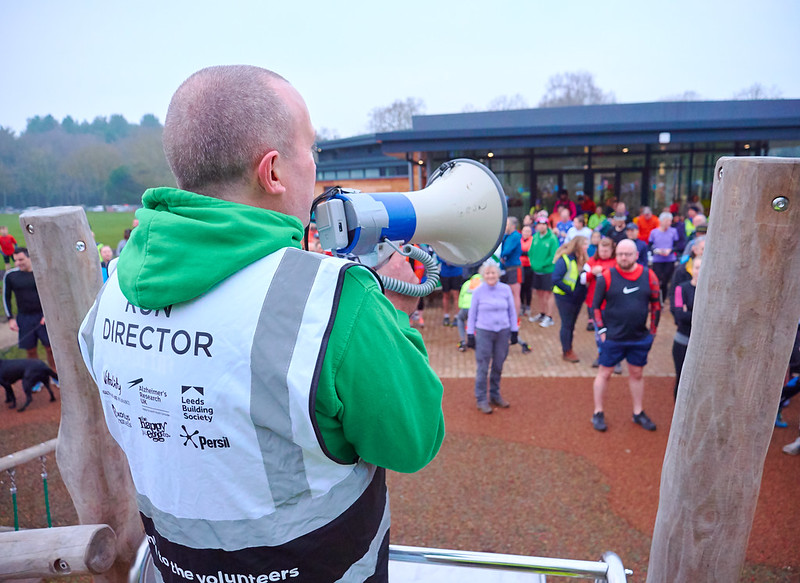 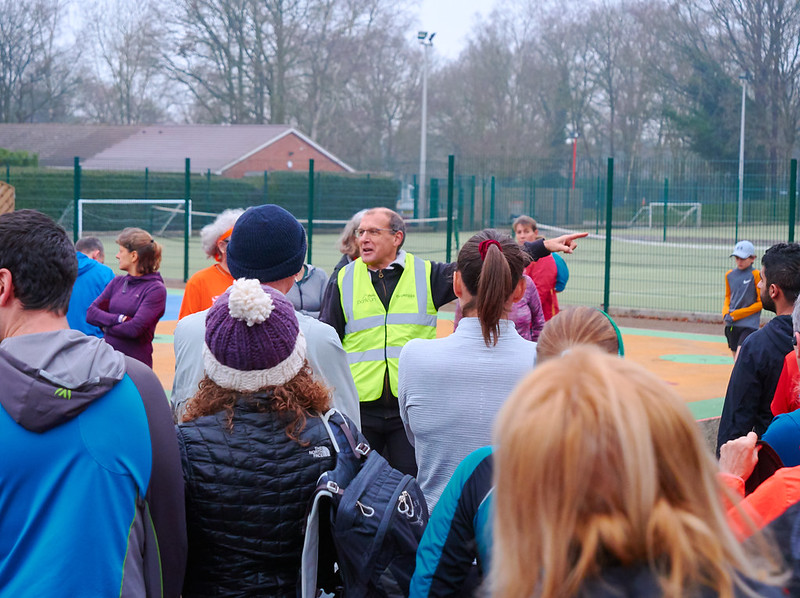 The start proved to be an object lesson in listening properly to, and indeed, attending,  the First Timer’s briefing, as many of the first to arrive at the start line lined up facing the wrong way.  The course has changed at least 3 times since I have been running there, but the most recent change switched the direction from anti-clockwise to clockwise.  People hoping to start at the back, suddenly found themselves at the front!  So a simple moral to this story:  just because you have run a course some time before, it is definitely worth spending some time checking the course again on the web page before the event, and listen carefully to the First Timer’s briefing! 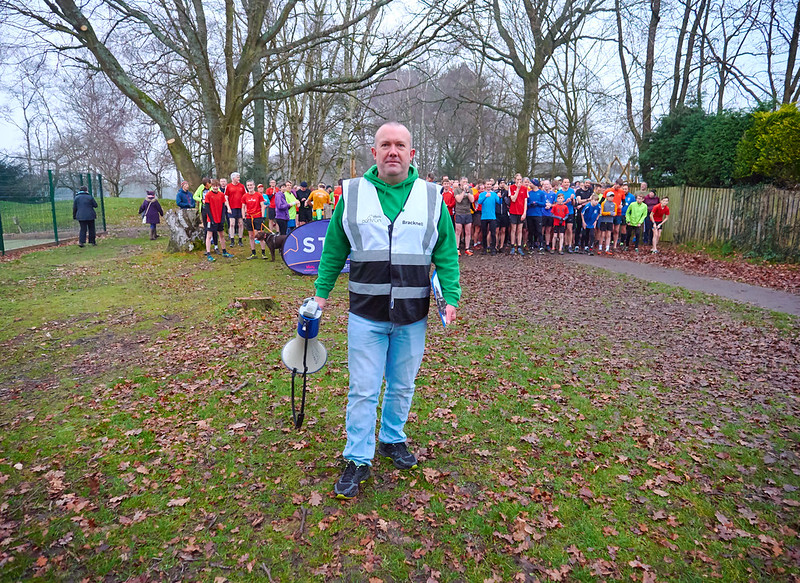 Three, two, one, go! A short dash on the path, and onto the playing field.  Wow!  Quite a lot of mud all around until we reach the woods.  Interesting to see the old tree stump from a different angle (“Thank You, Marshall!”). A small chicane taking us back onto the playing fields after the woods, and another taking us onto the path up by the new clubhouse.  A small contra-flow section (should that be Coиtra?) was met with a stentorian bellow of “Keep Left!” and with the numbers running, this is clearing an important marshalling point.  Round the football pitches, down into the allotments (“Thank You, Marshall!”) and then a short, steep little section before heading back to the start.  Another lap, a PB, and on the bike to Cali. Not a bad start to the New Year. 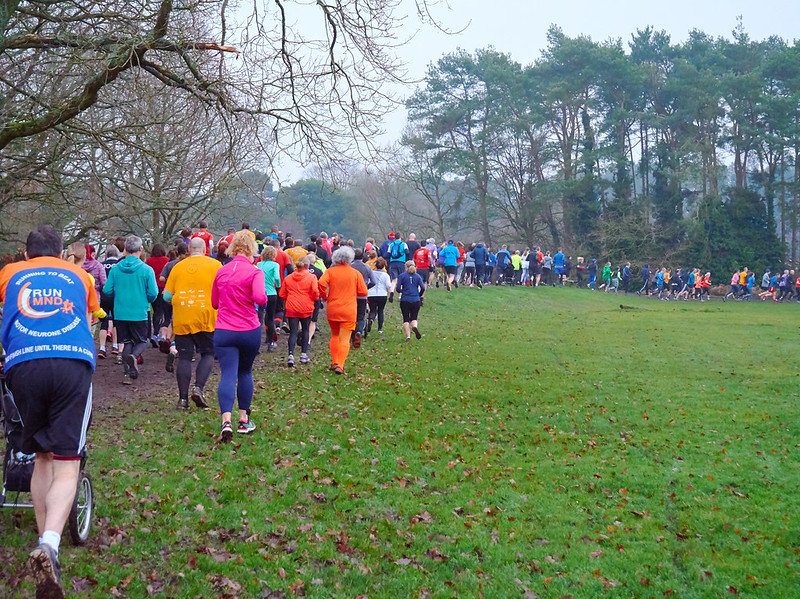 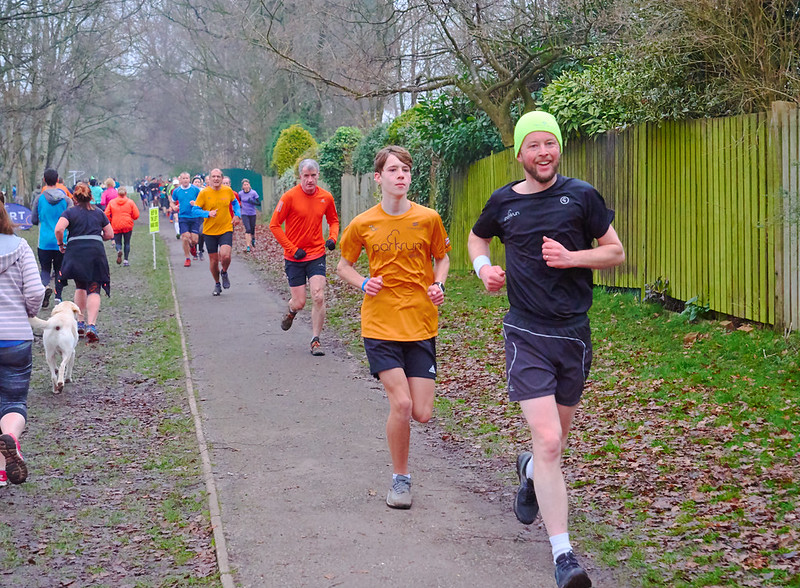 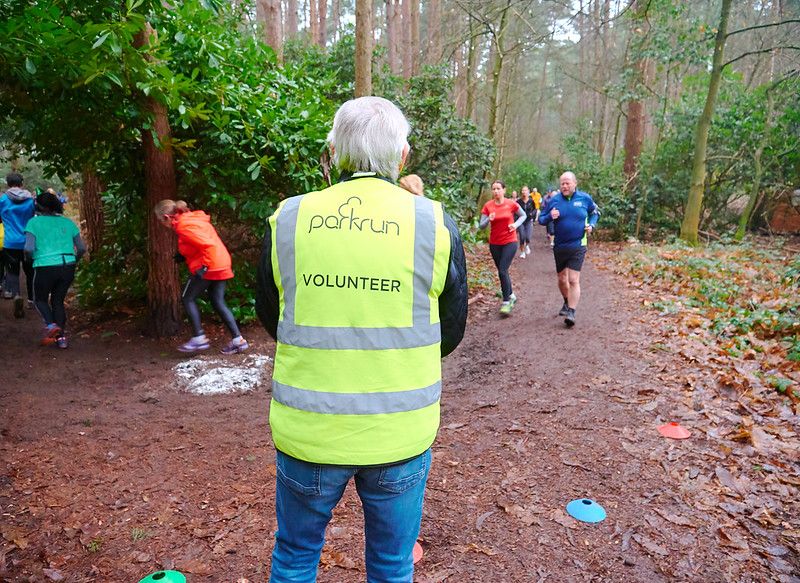 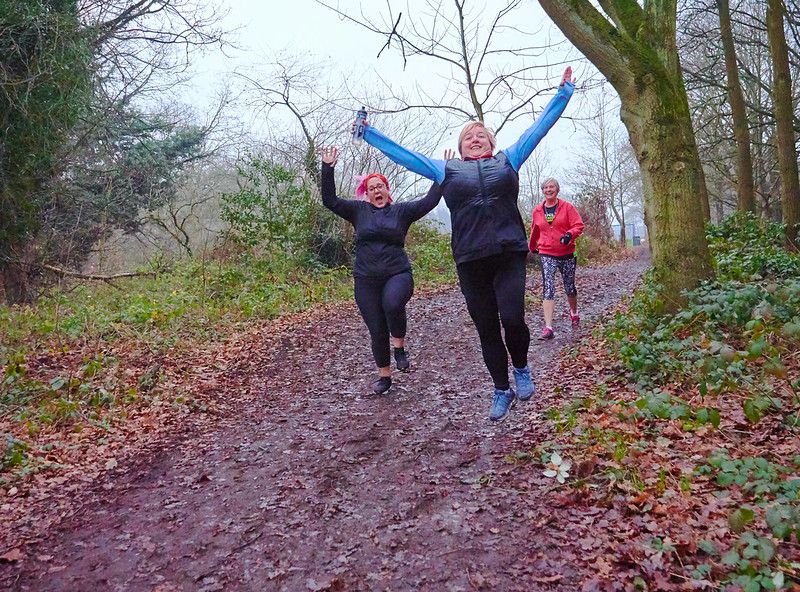 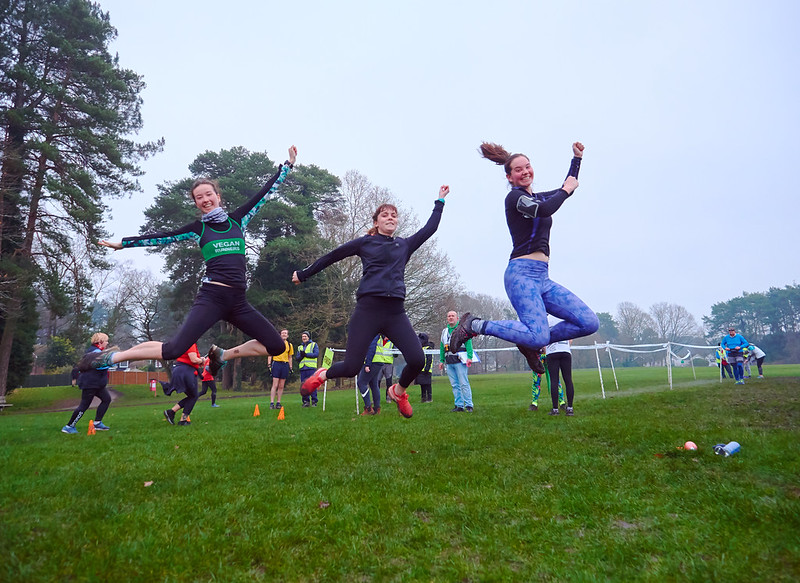 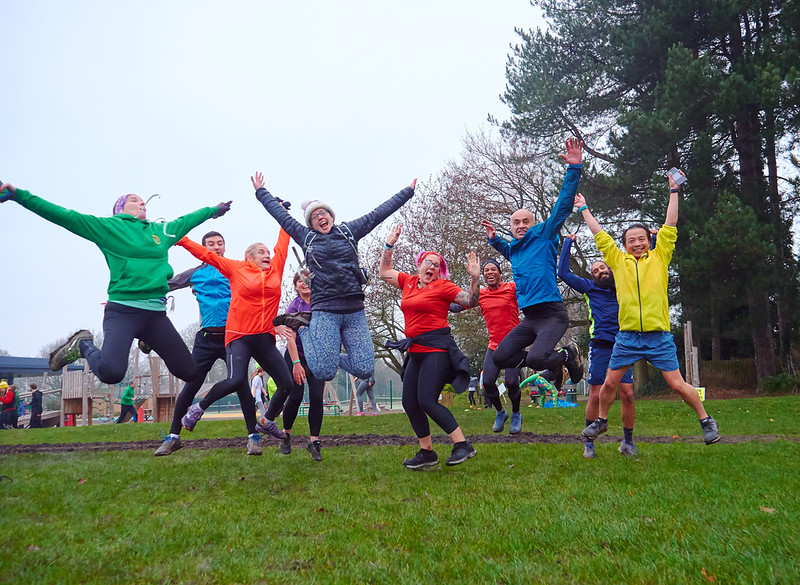 Congratulations to Sarah McDade as the first female to finish and in a personal best time of 21:08.  And also to Graham Robinson, first male, with a time of 17:58 which was just 10 secs off his PB.  In all, 418 people ran, jogged, walked and sloshed their way around to the finish, with 64 (including yours truly) recording a PB for the course.  114 tourists were running Bracknell for the first time, which is almost 30% of the day’s participants.  Slightly sad to see that only 3 people were completely new to parkrun - let’s hope more will join as January unfolds. 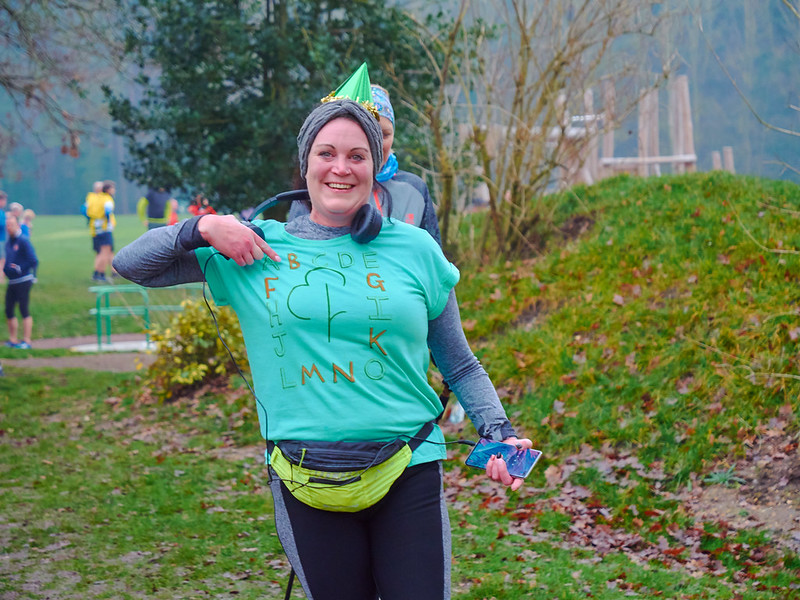 As ever, a huge, massive, enormous and heartfelt Thank You to all the volunteers, without whom parkrun cannot function.  I know it has been said many times, but volunteering really does give back to this fantastic community, and there are many roles which allow you to run as well as volunteer.  Seriously, give it a go! 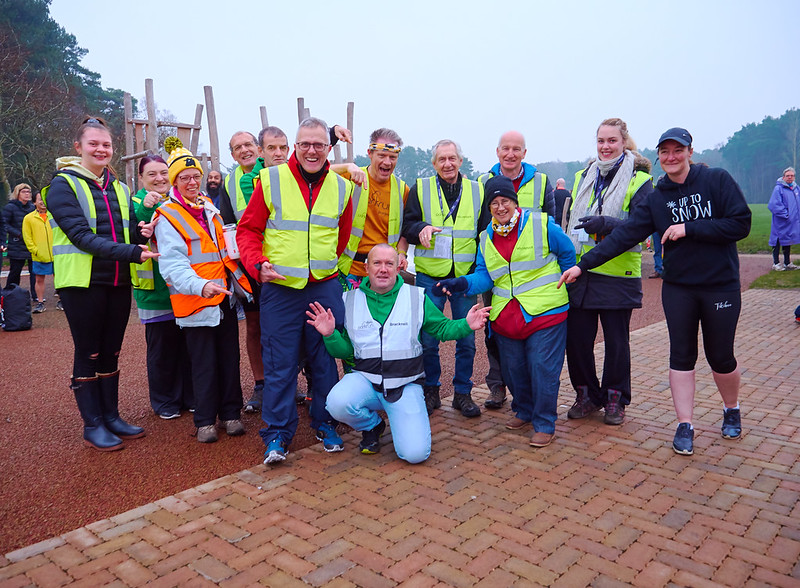 This week 418 people ran, jogged and walked the course, of whom 117 were first timers and 64 recorded new Personal Bests. Representatives of 51 different clubs took part.

I’m typing this while listening to Radio 4.  There has been a great drama series about a group of people in Northern Ireland who are going to do a parkrun. It gets everywhere. Even into my Christmas stocking with a whole book on the history since the first timed run in Bushey park

But enough of frivolities.  This will be the last newsletter of the year: nay, the last newsletter of the decade.  And as the last parkrun of the year Bracknell hosted its 250th run.  A nice symmetry even if it was not meant to be because the scheduled one had to be cancelled.  Not surprising really because this Saturday the route was just a little boggy in places so it would have been like a quagmire the week before.  Thanks go to the splendid organisational spirit of the team who handled the cancellation so efficiently.

Thanks also go to Bracknell Town Council for doing their best to keep the course navigable!! 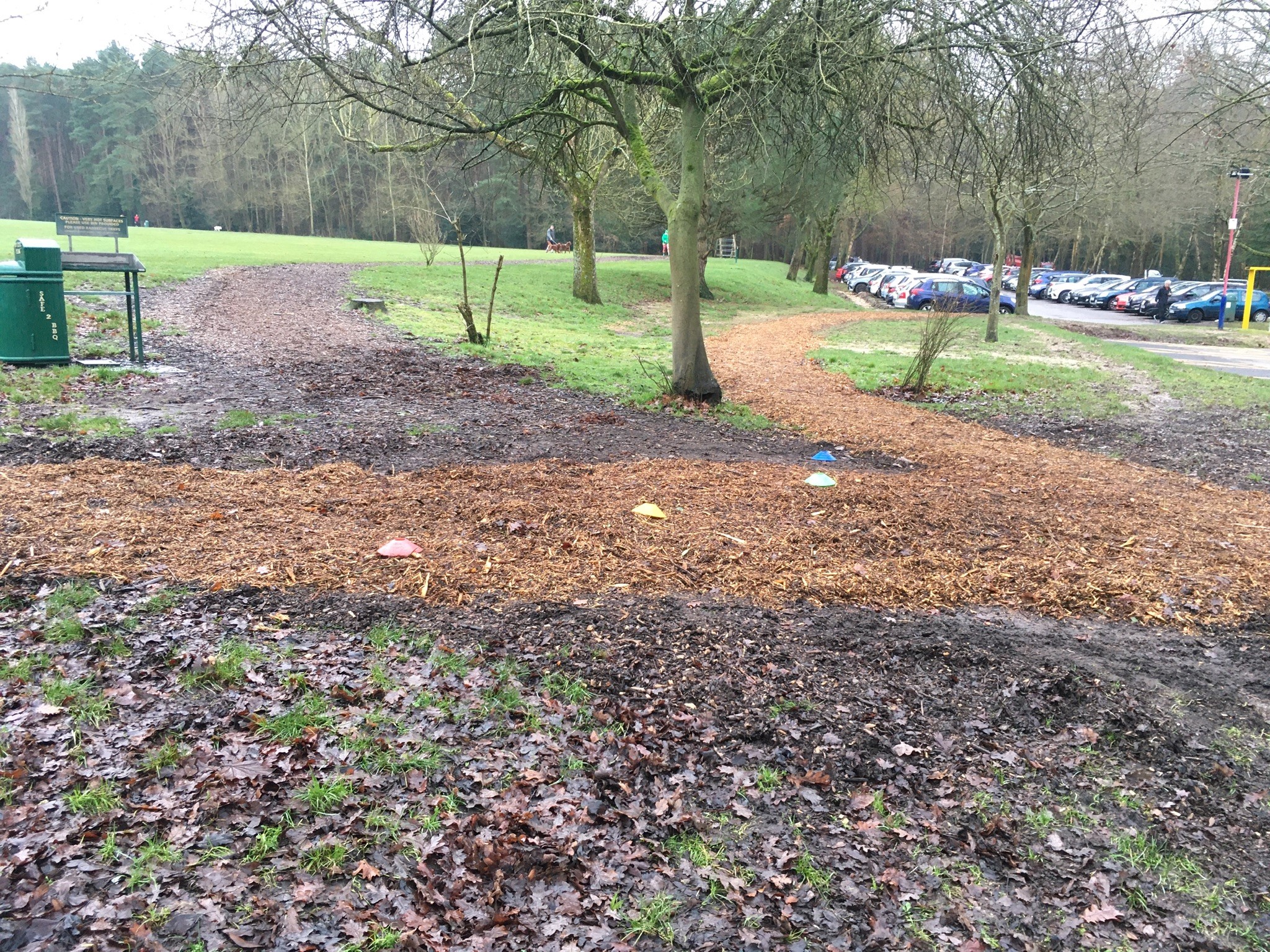 This week we celebrated some important milestones.  John Ellwood ran his 250th!

Edward Robinson, Nicolas Cousins and Warren Carter all made their 100th run.  Tony Stevens made his 50th run and celebrated with a new PB.  Mud obviously suits him.  Well done to the all. 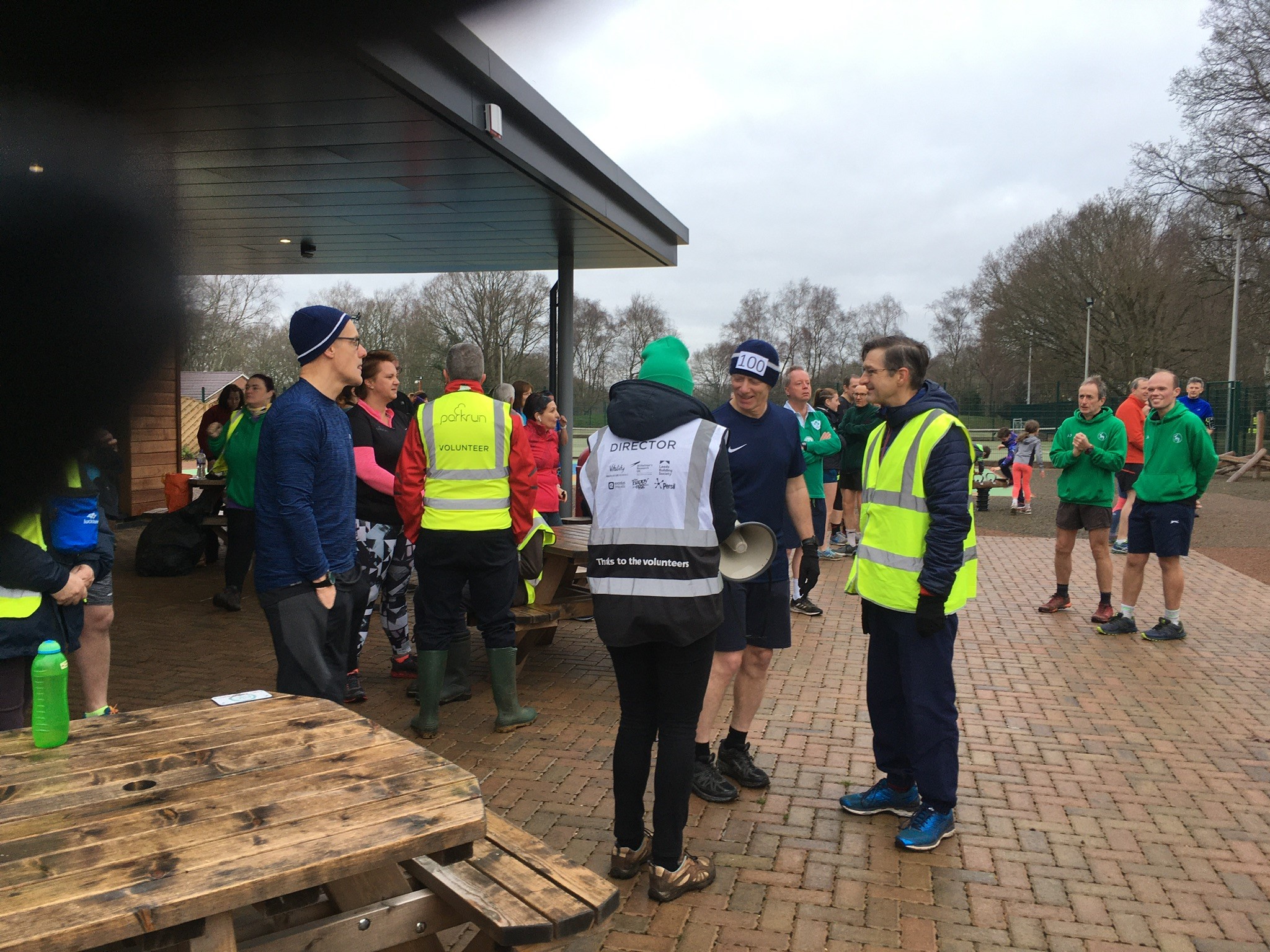 The first three males and females were:

In spite of the boggy conditions around the cricket field 24 people were able to achieve a PB.  A great ending to the year for them.

Thirteen people chose to end 2019 by making their parkrun debut.  We hope this was the start of a whole new life for them.  In addition to them we played host to a further 29 first timers to Bracknell.  Tourists are always cheered and it was great to welcome visitors from Australia and South Africa. 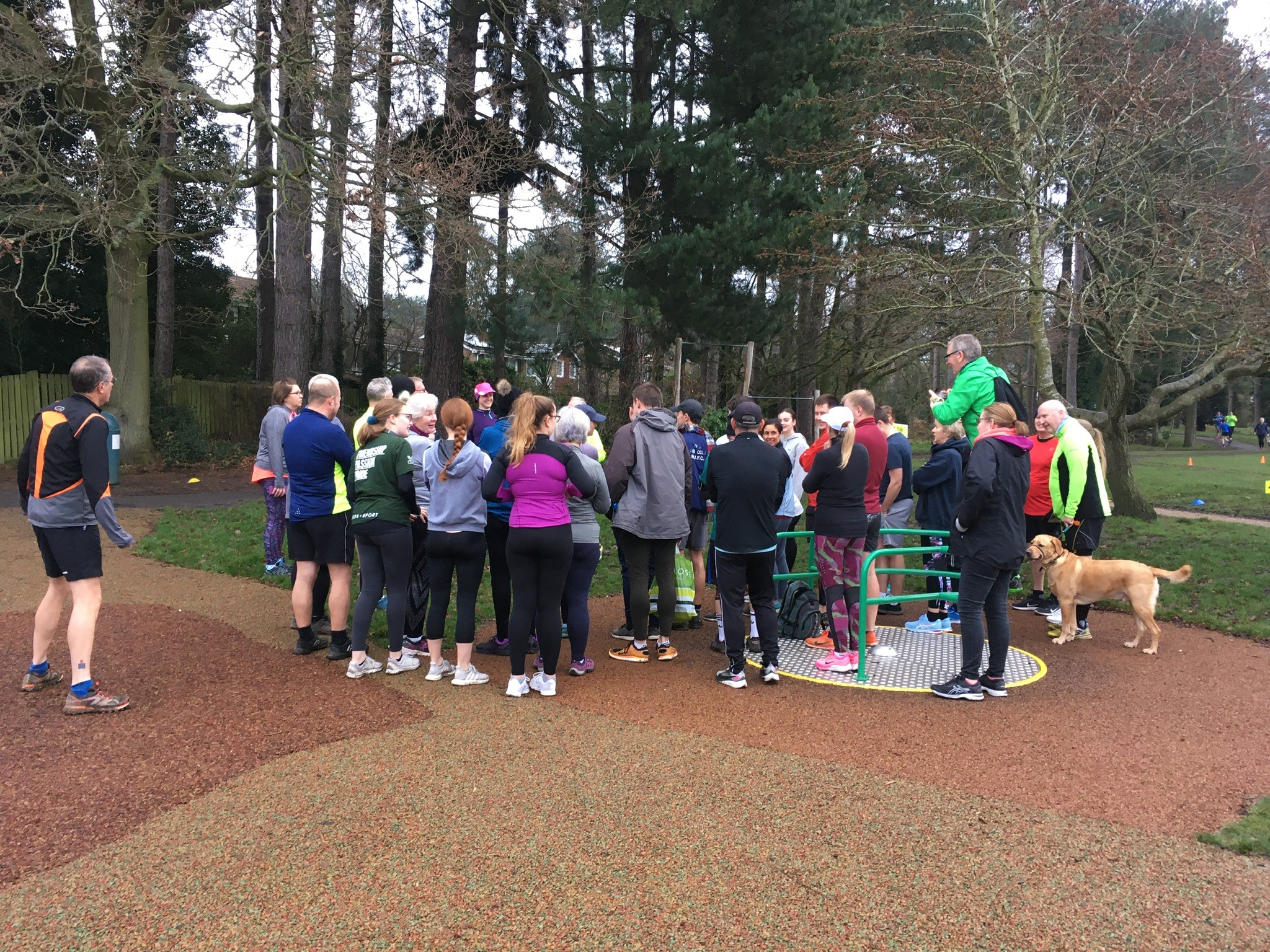 You will notice that all these photos are from the beginning of the run.  By the time I’ve finished, I can’t manage to remember to get my iPhone out of my pocket.  Have you got any more neurones firing than me? 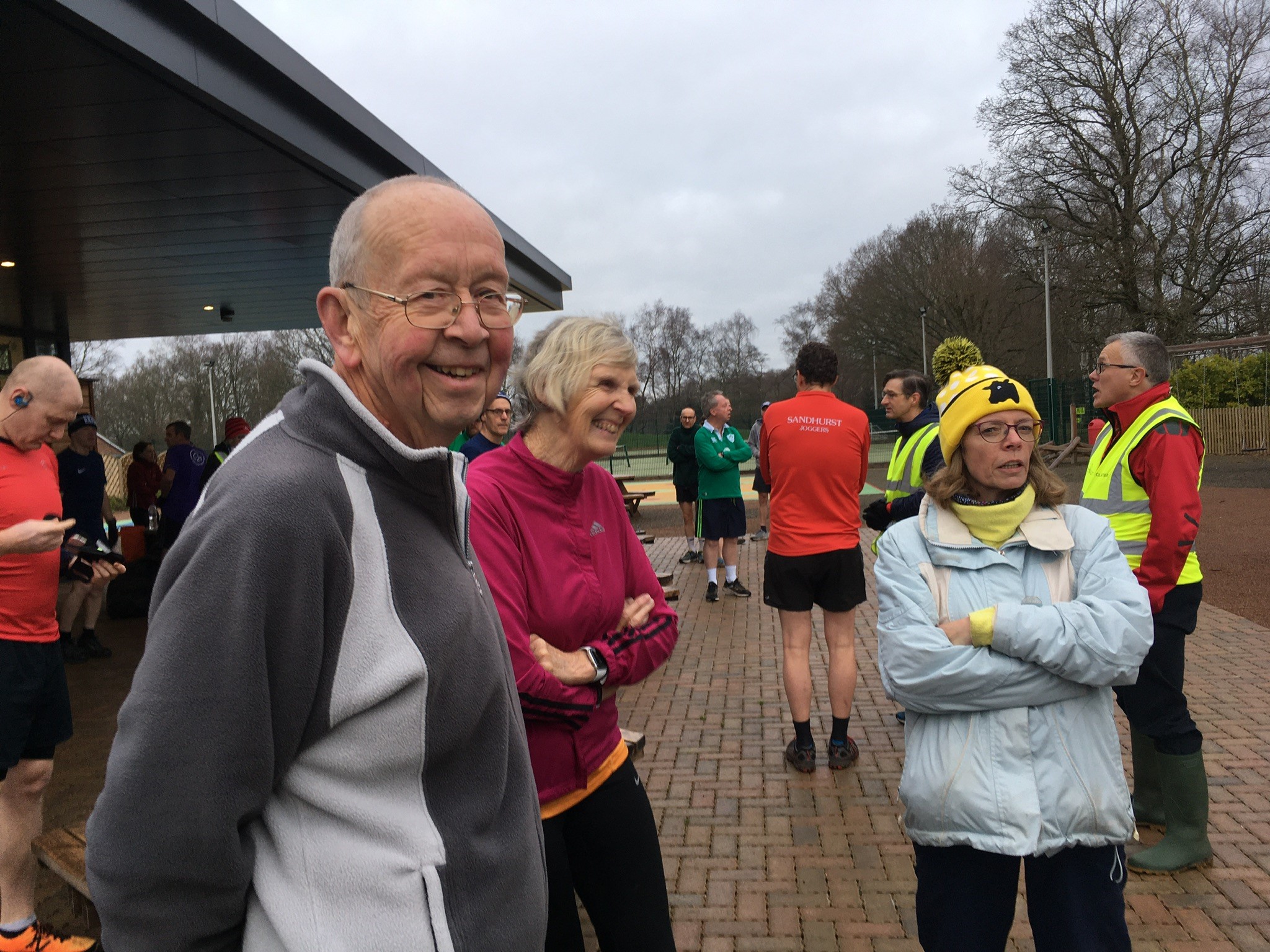 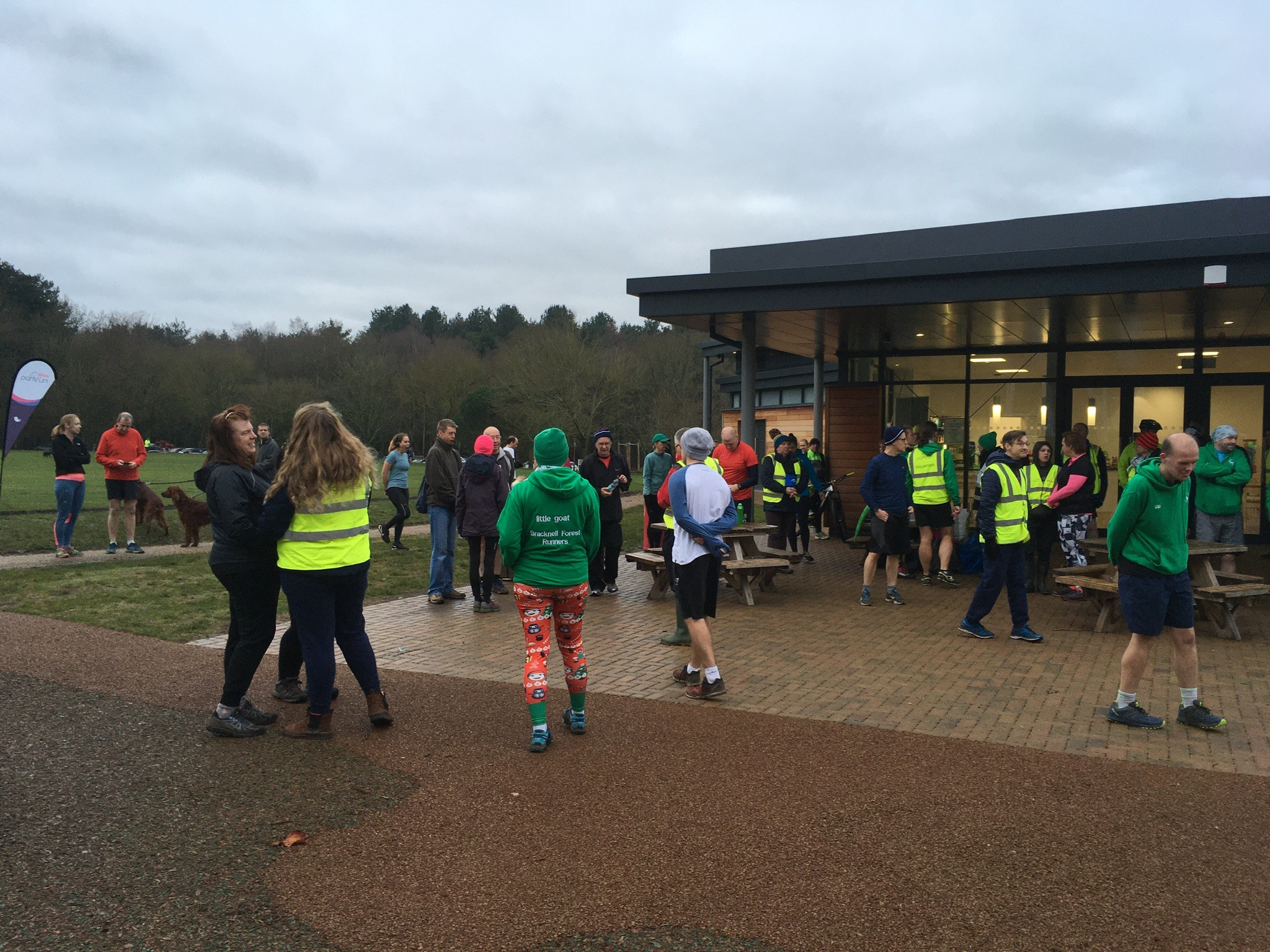 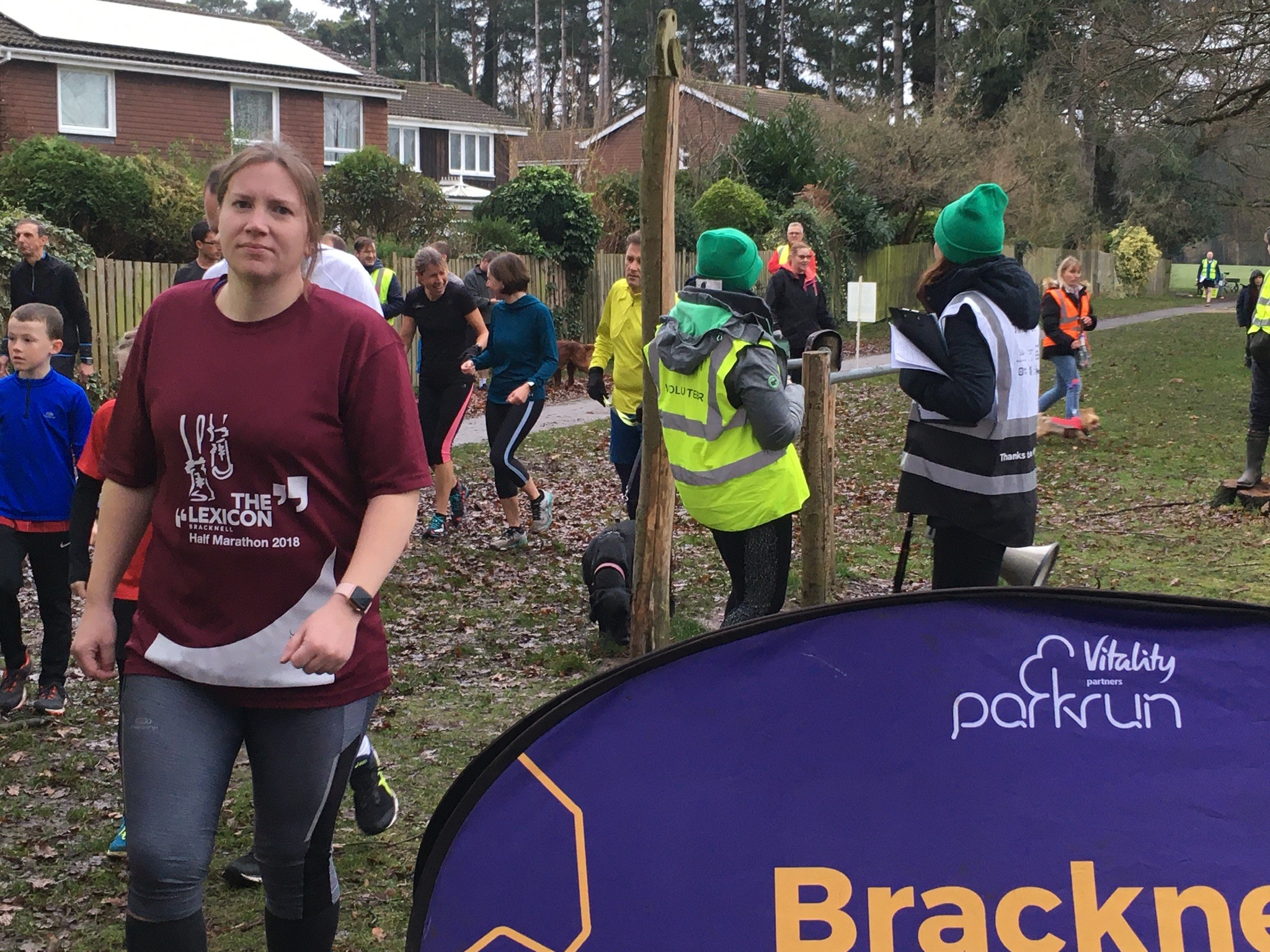 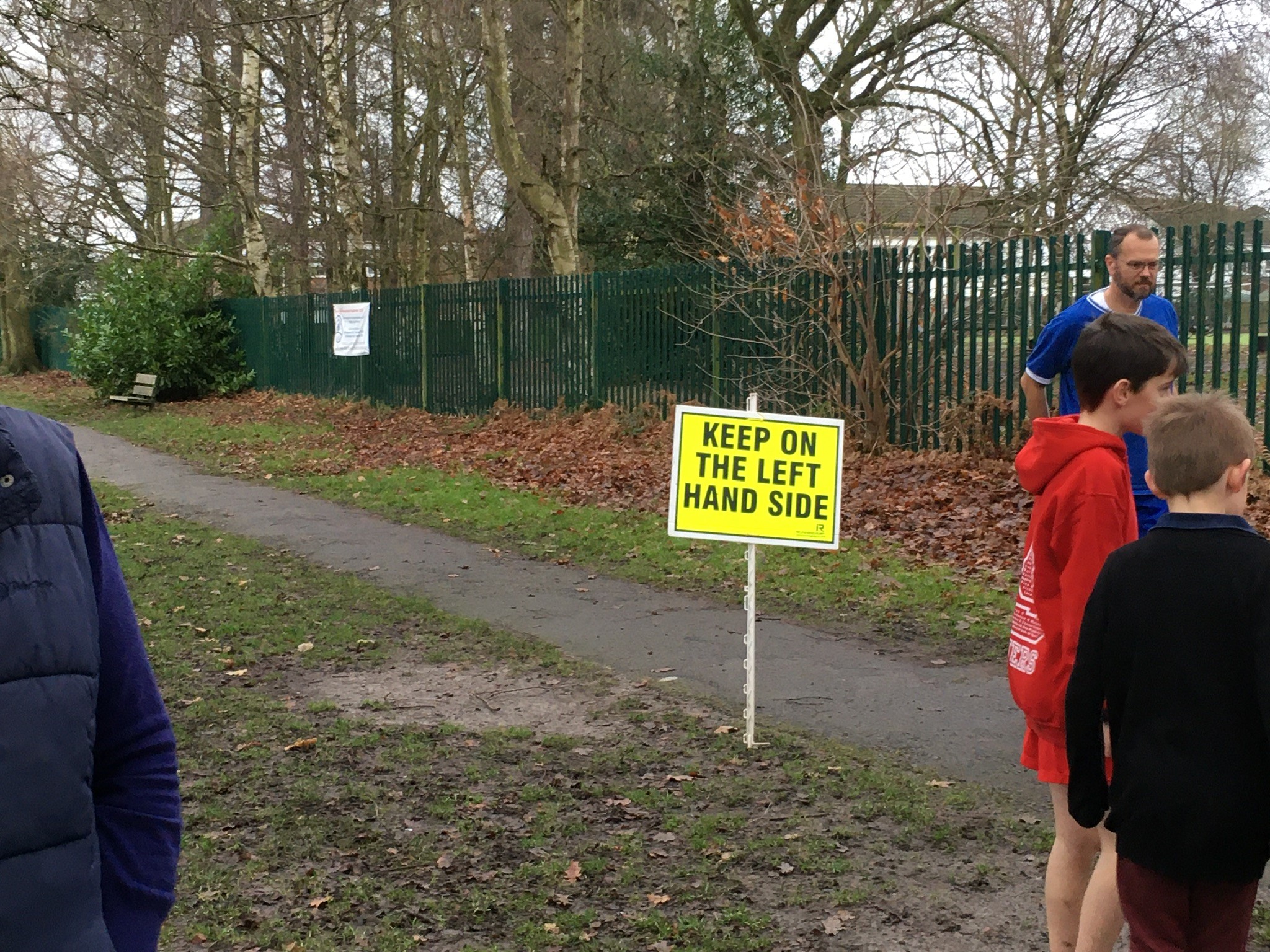 So here we are at the end of the year.  It was a great success.  We are beginning to remember the different twists and turns of the new route and of course are grateful for all the flour marking the tree roots and coloured cones ensuring we go the right way.  Having the pavilion open has been a real boon: hot and cold drinks, ice creams and a place to sit, not to mention the loos!!

Happy New Year!!! And may the going be good for you every Saturday at 9:00.

A huge thank you to the 26 volunteers who made today's battle through the mud possible for the excellent 303 runners who successfully completed the Bracknell parkrun.

A pleasant temperature today. A quick stretch. A well presented briefing from Run Director Martin (upon his playground tower!)... and it wasn't long before we were lined up and... OFF!

I am still getting used to the new course however I see it has started to make an impression with the runners. It is already some nicknames as I overheard some fellow parkrunners christen the first couple of corners in the grass of the new route as "Mud-Fest" and "Mud Bath" - aptly named and certainly not suitable for a sprint finish!

I found myself particularly impressed with all of the junior parkrunners participating today. They worked very hard especially getting their little legs out of the sticky mud and up over the inclines. They sure seemed to make up for it with the downhill sections though! Many were very visible proudly wearing Junior-10 parkrun shirts, although I must question the colour choice: not many of the shirts were still looking very white by the end of the run!

Congratulations to Callum who finished 1st male for the fourth time at Bracknell with a fantastic new Personal Best.

Congratulations to Lisa Hale who finished 1st female for the first time - congratulations and we hope you'll come back to defend your title!

Congratulations to Lara on her 100th parkrun - what a lovely balloon! 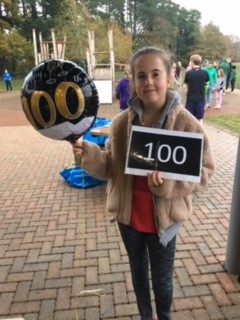 This week 303 people ran, jogged and walked the course, of whom 21 were first timers and 44 recorded new Personal Bests. Representatives of 23 different clubs took part.

It was a Bracknell Inaugural today, #243. Many congratulations to our esteemed Run Directors, and particularly Andy, for putting together bits of both old courses and adding new paths to make us a 2-lapper. It seemed to work well (from a back of the field point of view). 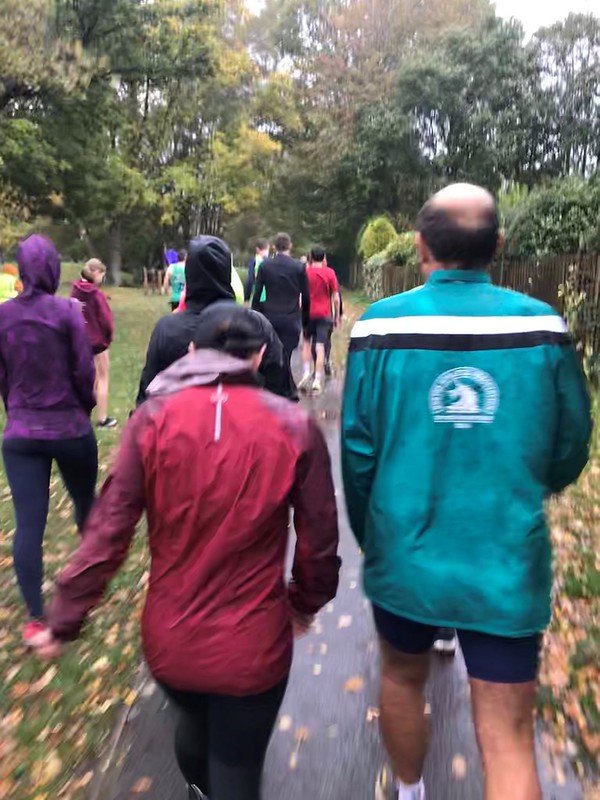 Walking towards the start, heading away from the cafe. 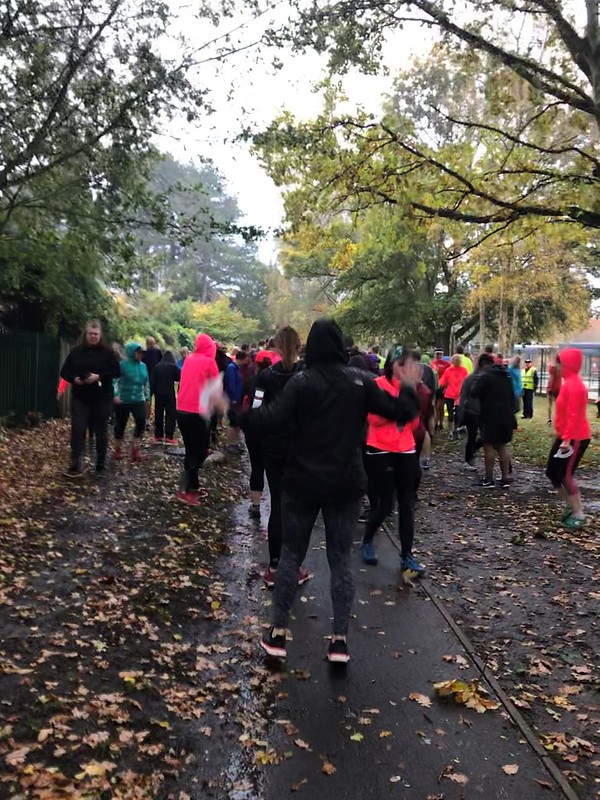 First surprise, turning round to face towards the cafe. Yes, we ran backwards, so to speak. This gave a new view of the tree stump. 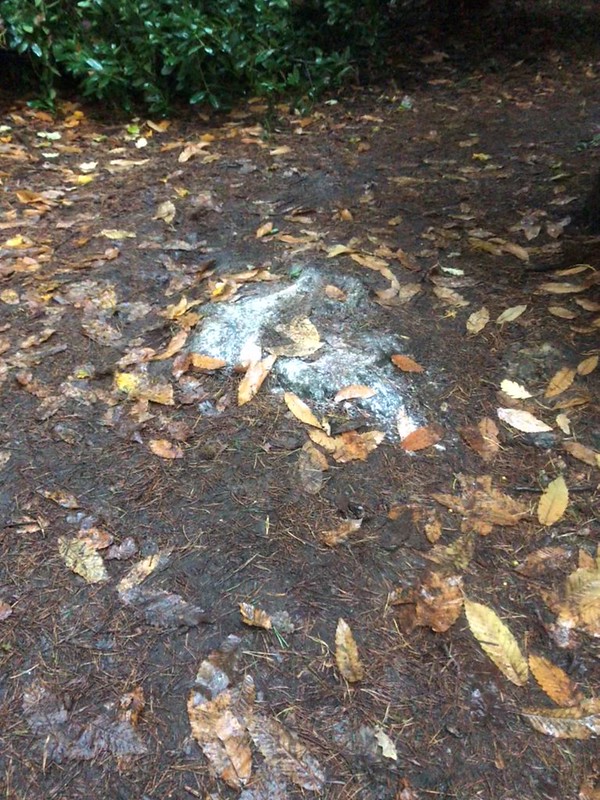 We were relatively few in number, only 201 runners, so the pinch point near the cafe didn’t seem to be an issue. It will be interesting to see how it works when the rugby-final watchers return en masse next week.

We had two tourists braving the rain and mud  (yes, I am afraid the new course still has mud) from Woking and Inverness. Nobody owned up to a milestone run or a birthday but some runners did own up to trying to keep up with their children. Or dogs.

My goodness, the volunteers deserve a special pat on the back. Standing in the pouring rain, always cheerful and encouraging. We seriously couldn’t have managed without them.

This week 201 people ran, jogged and walked the course, of whom 13 were first timers and 37 recorded new Personal Bests. Representatives of 21 different clubs took part.