Well here we are, the last day of 2020..  what a year hey... it has been aggggggeees since we have seen each other, run, walked, jogged together, socialising in the cafe for a post run coffee, cake and results!!! not to mention hugs and kisses...

Hope you all had a lovely Christmas..

We can safely say parkrun has been missed 100%. We can't wait to get back to our parkrun Saturdays and Junior parkrun Sundays. Until that time when it is right, and safe to do so, we must keep strong, carry on with any fitness routines we are doing, and keep positive..

I won't reflect on the year, think we all know what year it has been, and how we have been doing, and coping through it all. We are all experiencing it, and dealing with it in our own ways.

I know I (Claire) haven't posted much on our pages this year, I did at the beginning but then didn't want to bombard you when we are all doing different things, and working out what to do on Saturdays mornings!!!

Rest assured, I have been thinking of you all, and hoping you have all kept up the running or perhaps even started running

I know a few people who have taken up running since lockdown which is fab!

While, we haven't been able to run parkrun (no pun intended!), or have Christmas and New Years' Day events, we are looking forward to the day when we return!!!

So, hope you all have a lovely day/evening, however, you end the year with.

Wishing you all a very Healthy, safe and happier New Year 2021

We are still here... looking forward to seeing you all soon ish....

So, today is week 12 of no parkrun L how are you all doing? what have you all been up to - to keep yourself fit, well, out of mischief! But more importantly keeping your mental health positive in these very strange and unprecedented times?

I know I (Claire) haven’t posted to our FB pages for a while, but also follow us on Twitter @brightonparkrun   I just wanted a personal break from social media for a mo, and normal services will resumes sometime soon

Please feel free to post on our pages, all your runs, walks, jogs, any training you are doing as it’s great to hear from you all. I follow some of you on Strava so I can see you have been running and being creative with your new parkrun home events!!! :)  as have I...

Just to say the Core Team have been virtually catching up over a coffee/chat over Zoom, infact we have a meet up this morning – prob around the time we are usually in the cafe processing the results!!

I just wanted to write this, as I don’t want you to feel we aren’t thinking of you all because we are, and we are all missing parkrun...

We are so looking forward to seeing you all face to face – whatever that how / may look like and when we can..

Stay safe, alert, social distance, and see you when we can

Claire and the Core Team x

So, if you are anything like me you are missing parkrun, seeing your friends, enjoying banter, and catching up after the week you have had.

You enjoy running/walking, jogging, (or all three in one!) around Hove Park 2.5 laps round, playing cat and mouse with each other, aiming to beat your PB from the previous time, crossing that finish line, hitting stop and save, (obviously keeping moving, and staying in your positions in the finish funnel), getting your token and scanning them..

Just for now, as you know events have been cancelled, until the Government have given us all the go ahead to be able to start again.. We are all in this together, staying at home, saving lives, and helping the NHS. Coronavirus (Covid 19) is serious and it is happening. We just don’t know how things, our lives will be affected in the future after this...

This Saturday will be week 3, we have not had parkrun.. it is weird and probably feels like it did before parkrun started.. if you can think what you used to do on a Saturday morning - I can't... #habits.

The Core Team can’t wait to see you all again, – that’s going to be one exciting Saturday!!! #DFYB

Let us know what you are doing to keep yourself active..

It’s all about the women: Celebrating International Women’s Day

In anticipation of International Women’s Day on 8th March, Saturday 7th March 2020 saw
parkruns around the world join in a celebration of female participation, with as many women and girls as possible encouraged to join in by walking, jogging, running, volunteering, or simply coming along to watch.

Over 400 parkrun events in the UK hosted a special day. At our own Hove Park event,
Brighton & Hove Women’s Running Club (BHWRC) staged a parkrun ‘takeover’, with many of their members running, as well as filling the majority of the volunteer roles alongside our core team members and Duke of Edinburgh volunteers. They’d also been busy baking and set up a cake stall full of tempting cakes and biscuits to sell to runners and other park users with the proceeds going to the Chestnut Tree Trust (our local children’s hospice that cares for 300 children and young adults from 0-19 years of age with progressive life-shortening conditions). Rewarding ourselves for running by eating cake afterwards is one of life’s greatest pleasures and the stall raised a grand total of £247.47 for the Chestnut Tree Trust.

It was a chilly and cloudy (but compared to recent Saturdays relatively benign) morning and 467 runners took part, of whom 185 were female.

First home was Nicholas Airey, with a time of 17.31, followed by Jacob Househam who
raced home to a PB of 18.06. But to cut to the women on this special day, the first home was Charlotte Boden, at 20.57 and Clare Pirie was second at 21.36. Very impressively, Xanthe Cox, who came in third with a PB 21.48 is in the JW11-14 category, having completed only 7 previous parkruns (and seven junior events). Many congratulations Xanthe, we look forward to hopefully seeing you run with us again many more times in the future. 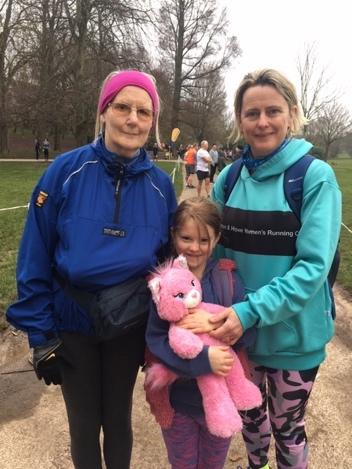 In another special first-time achievement, three generations of the Jackson family women ran together. For Elizabeth Jackson (JW10), who has run over 50 junior parkruns, this was her first senior event. She ran alongside her mum, Cath, and granny Mary who was taking part for the first time ever in any parkrun. Congratulations Mary, not just for being such a good sport and getting involved, but also for coming in first in your age category (VW75 – 79). Go girls!

Forty-four of this week’s participants were first time park runners, of whom two thirds were female.

Note for next year: If every (or even most) females who ran this week had brought along a
female friend, the number of women participants would have outnumbered the men. Game on?

The one where you should have popped the question
Well done, all 388 of you who this week ran, jogged and walked the course here at Brighton & Hove, thereby contributing to parkrun history at this, our first ever 29th February parkrun.   If you were planning to propose to somebody at parkrun but you just forgot or you couldn’t catch up with them during the run, don’t worry, there’ll be another Saturday 29th February coming along - in 2048.  So those of you who are advanced planners, get it in your diary now, and start training for that PB.  You will, of course, have the advantage of being in an older age category, and your beloved, astounded by your extraordinary age grading, will surely say yes.

25 of you joined us as first timers today, undeterred by the threat of storm Jorge, which followed hot on the heels of Storms Ciara and Dennis.  By the way, does anyone know what happened to storms E.., F.., G.., H.., and I..?  Surely they should have joined us ahead of Jorge? 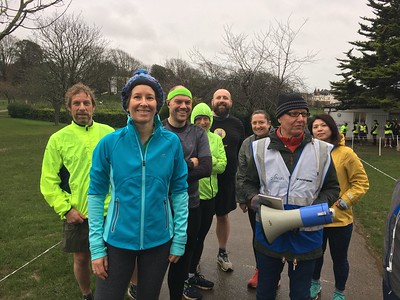 Some of today’s first timers, briefed by Run Director Shawn, and eager to get on the course

19 people recorded new Personal Bests today.  Well done, all of you, for such a splendid achievement.  One PB particular struck me today, among the frontrunners: Jade Elphick, on her 149th parkrun, smashed it today, taking over a minute and a half off her previous best time to finish in 19.26 with an age grading of 76%.

This week, the valiant volunteers who laughed in the face of Storm Jorge to bring you your parkrun fix were:

It was celebration time today and a welcome to the 50 club for Fay Jones, Ian Winston and Jeremy Connor, who each completed their 50th parkrun today.  And among our junior runners, Dylan White and Amelie Parker each completed their 10th parkrun today - both Amelie and Dylan did their first parkrun in 2016, and they’ve come back to parkrun again recently, each achieving a raft of PBs along the way.    Well done, all of you, and we hope to see you soon, this time sporting your 10 or 50 t-shirt with pride, and a well-deserved sense of achievement.

Today's full results and a complete event history can be found on the the Brighton & Hove parkrun Results Page.

Only another 1461 weeks to go until the next Saturday February 29th.  See you then.