It's official - we've had a great January - the best on record in fact.

We've been noticing that far from the typical "parkrun bulge" that lasts for a couple of weeks after Christmas - numbers at Hove park have been above 500 throughout the month. Not bad - considering the average weekly attendance for the whole of 2019 was about 425.  I'm sure you'd love to see a graph of how the January total has changed since we started in 2007. Ah, there's one below! Each point represents the 4 weeks after 1st Jan because we haven't always done the New Year's Day double with Hove Prom. It would be amazing if we stay at over 500 throughout February! Let's try 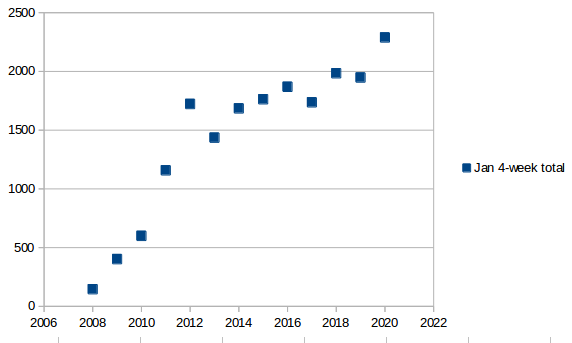 5k Your Way visited Hove park on Saturday and you will have heard Jez Connor describing the aims of the group at the run briefing.  We received this message from Jenny Wilson after the run. 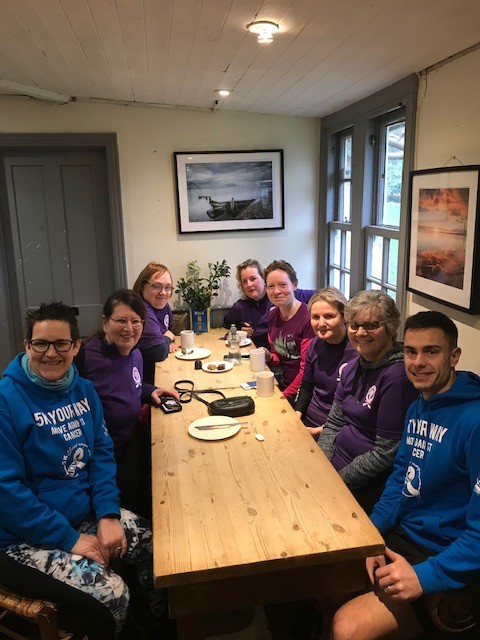 Thank you for your great welcome this morning. We really enjoyed being with you. We form part of a virtual (international now) group of doctors who have or have had cancer. We felt that Brighton was a good place to have a weekend away. I (Jenny) am a keen parkrunner and RD in Bedford. On realising that this was 5K Your Way weekend (and as an ambassador for this movement) I was keen to involve the rest of the group and was put in contact with Jez your local ambassador. Science is increasingly showing that moving whilst having cancer treatment is beneficial. 5K Your Way has been set up as an alternative coffee morning to encourage those affected by cancer, including family and friends to move more. The great advantage of Brighton and Hove is that as a multi lap event it is possible to build up, starting with a single lap. This morning I just cheered people on, one person did 1 lap, some walked the whole thing and some ran it. If you want to find out more about the initiative then go to https://5kyourway.org/

[5k Your Way meets on the last Saturday of each month at Hove park. Meet by the basketball courts at 8.50am just before the run]

And finally...
This week 541 people ran, jogged and walked the course, of whom 38 were first timers and 98 recorded new Personal Bests. Representatives of 31 different clubs took part.

Today's full results and a complete event history can be found on the Brighton & Hove parkrun Results Page.