parkrun HQ has just made the following announcement that parkrun in the UK is cancelled until at least April:

‘All parkrun events in the United Kingdom have been suspended with immediate effect due to the ongoing COVID-19 (Coronavirus) situation. At this stage we have cancelled events up to the end of March. Please follow our communications channels for ongoing updates. parkrun’s global position is published and will be updated here.”
Finally, remaining active is incredibly important, and we are working on ways to encourage and support that, however please do not arrange group gatherings at your parkrun venues whilst parkrun events are suspended.’

Despite the threat of rain we had perfect conditions for the 169 people who ran, jogged and walked the course, of whom 32 were first timers. Representatives of 28 different clubs took part.

Congratulations to the 17 who recorded new Personal Bests and to M40 Adam Jundi who led the field home in 17:49 for the 50th time! Our double female Record holder Ellie Monks of Southampton AC led the ladies home for the 11th time just 4 seconds away from her 3 year old Wilverley Record in 17:33. Ellie also broke our W35 Record today. 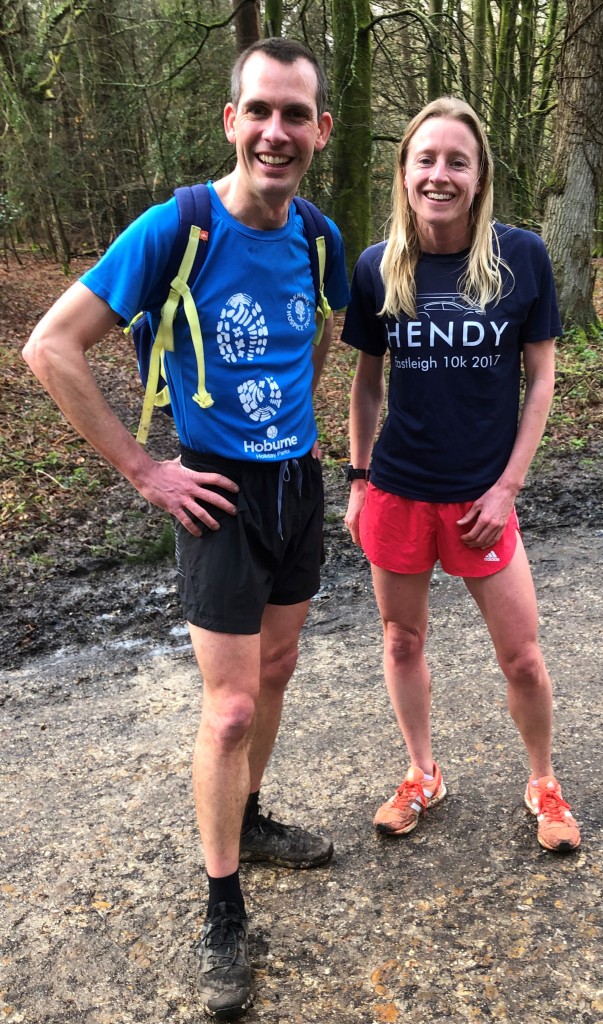 Both First Finishers were beaten on Age Grade scoring by M11 Jon Pepin who scored 81.09% just pipping Ellie's 80.86%. Jon and Dad Nick ran from Brockenhurst as a warm up and back there again for their cool down!

We had several Milestone runs today with M50 Ian Davidson of 17 Port & Maritime Veteran Runners top of the list with his unofficial 200th: 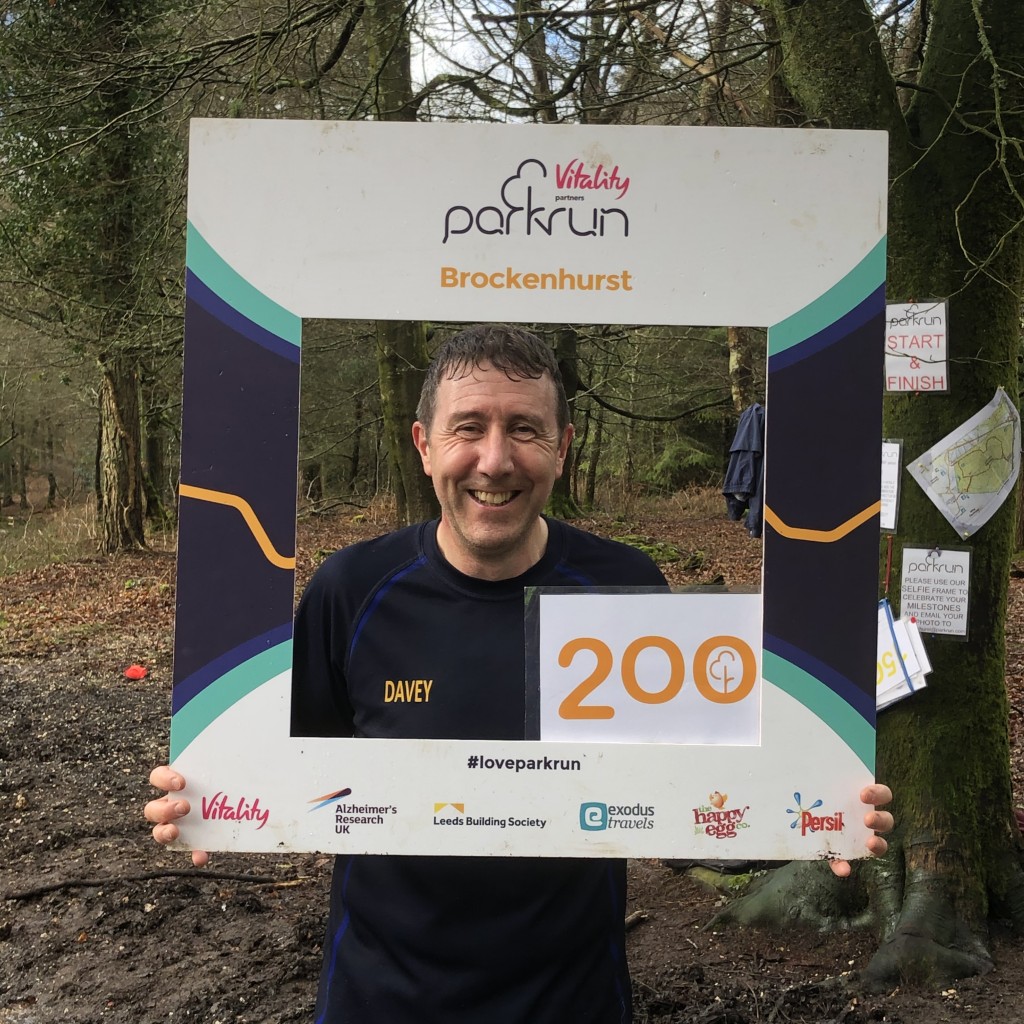 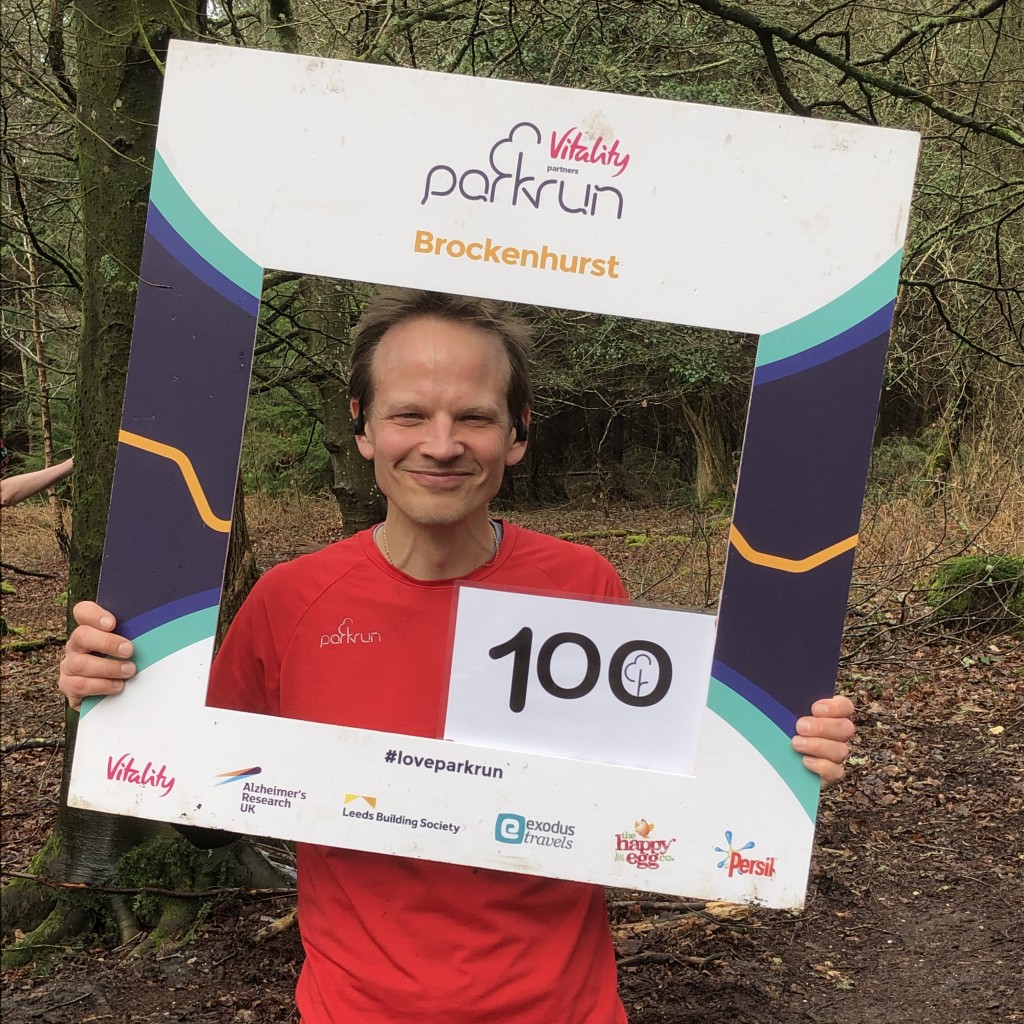 Many thanks to the 14 volunteers who made this morning's event possible:

To celebrate International Women’s Day we encouraged women in particular to participate by walking, jogging, running or volunteering. Although we had some welcome male volunteers, the core team of Run director, timekeepers, barcode scanners , token issuer and run report writer was all filled by women. 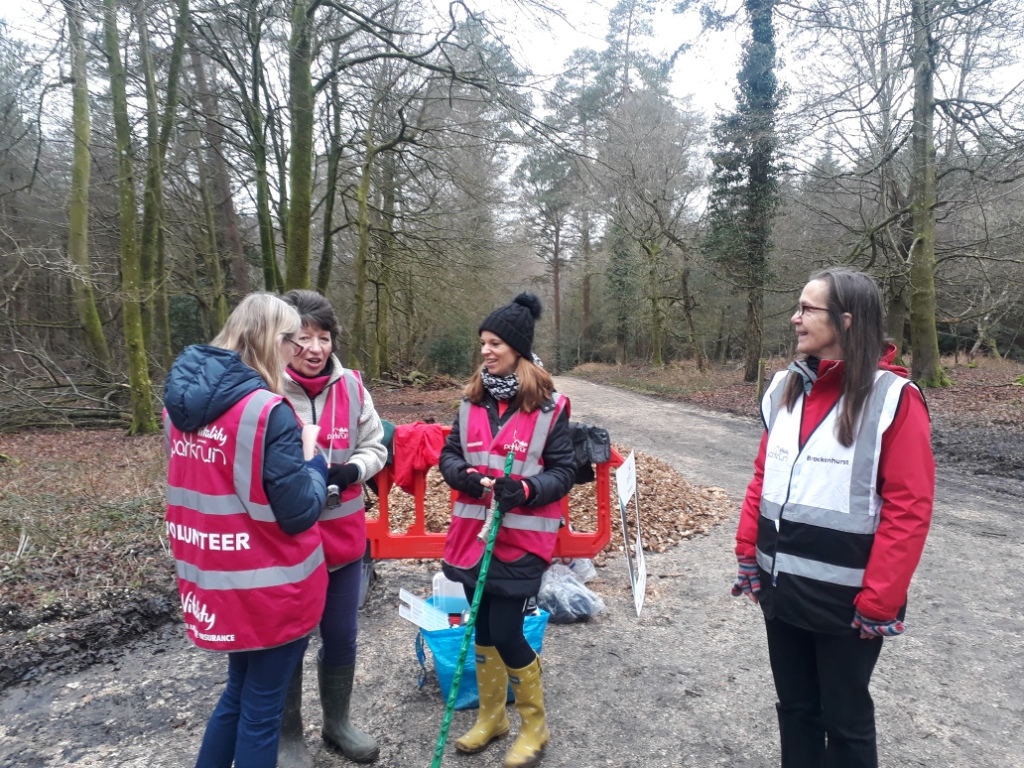 Our male runners are also supportive of the cause... 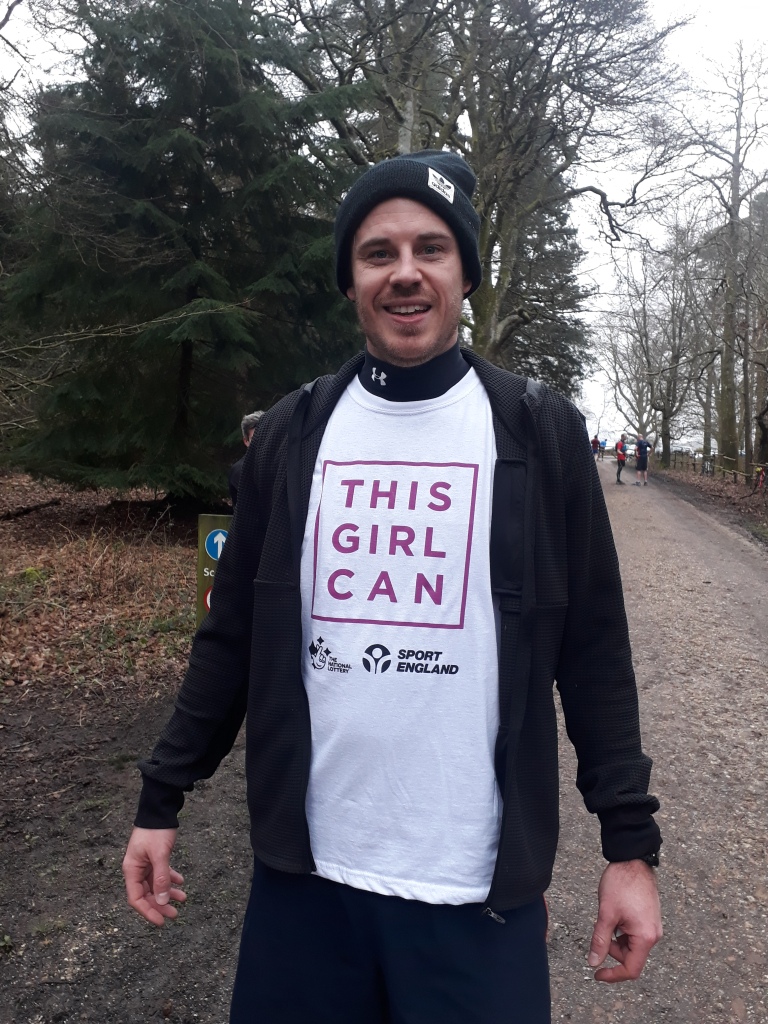 It was a grey and damp morning, but with no rain, so good running conditions, and we had a good though not record breaking turnout. A coat tree was also spotted. 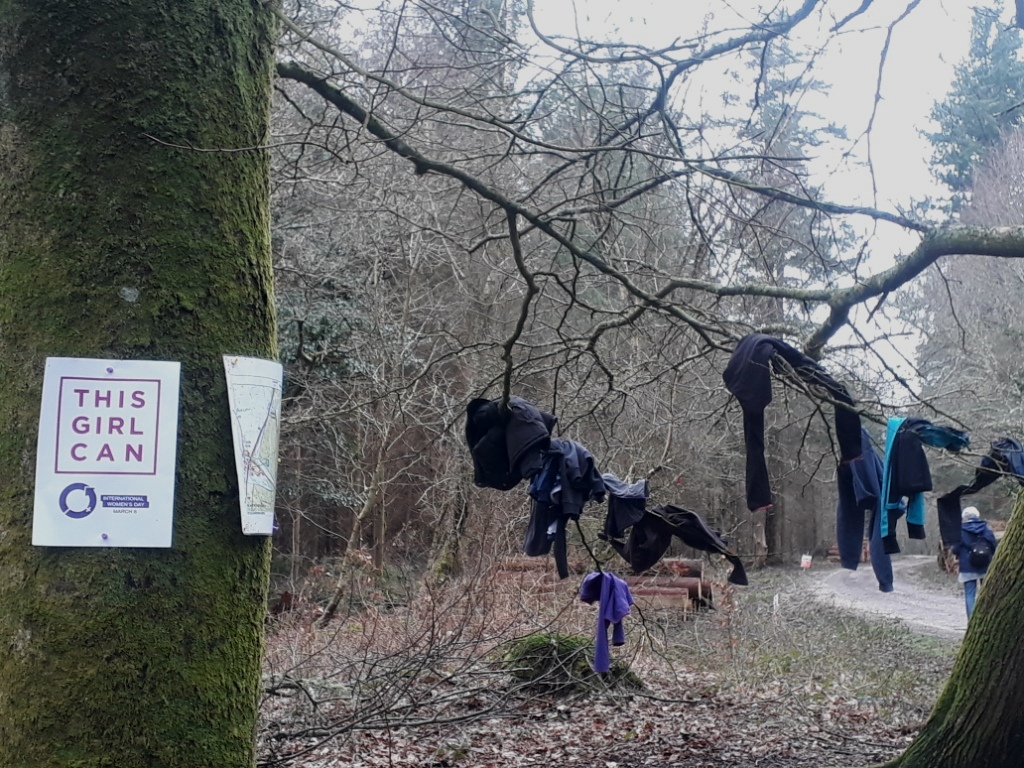 This week 221 people ran, jogged and walked the course, of whom 42 were first timers and 27 recorded new Personal Bests. Representatives of 31 different clubs took part, including two visitors from the Gold Coast in Australia – definitely this week’s furthest travelled runners. We also had 15 visitors from Poole AC.

We were pleased to celebrate Pauline Breeze’s 100th parkrun. She has run all but two of her parkruns at Brockenhurst, and has also volunteered for us on over 60 occasions . 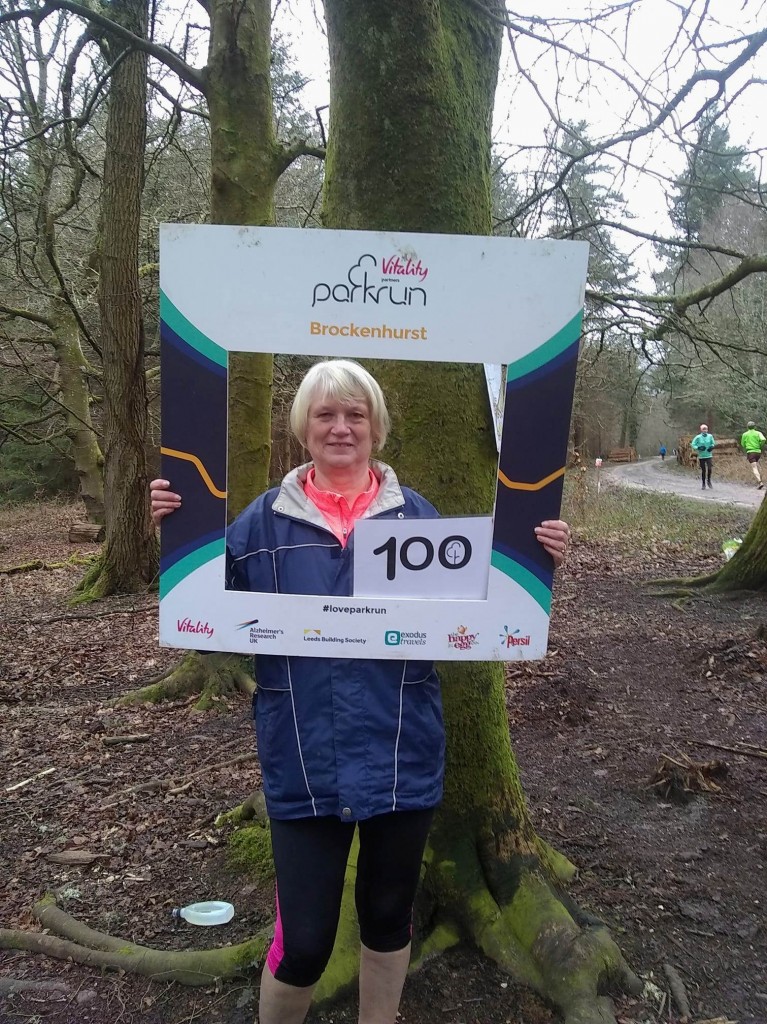 Today we were all ‘first timers’ as it was the first time parkrun has been held on a Leap day! Congratulations to everyone that took part whether running or volunteering. If you want to run a second one, you will need to wait until 2048.

With Storm Jorge, threatening to bring high winds and more bad weather, the course recce was done at 7am this morning to check it would be OK to run. Clear course, very settled weather, no problem whatsoever. The rain held off until after the run got underway, so most of our runners were under cover of the trees. And yippee, the sun did show itself towards the end of the run.

With other local parkruns cancelled due to saturated courses we had our 4th largest attendance as 266 people ran, jogged and walked the course, of whom an impressive 82 were first timers!  Representatives of 25 different clubs took part.

This was the view from the rear of the Start courtesy of Russ Lomax:

Congratulations to the 17 who recorded new Personal Bests and to first time visitor M25 Thomas Niner from Brighton and Hove City AC who led the field home in 17:46. That swift time is over 2 1/2 minutes slower than his Worthing PB!

The ladies were led home for the 8th time by W35 Gemma Russhard of Lymington Tri who celebrated with a 20:10 PB.

Both First Finishers were beaten however on Age Grade scoring by W60 Jane Hodge of Hardley Runners who set 76.18%.

We had two 100 Milestone runs today from New Forest Runners including our own Volunteer Coordinator Gail Lydford: 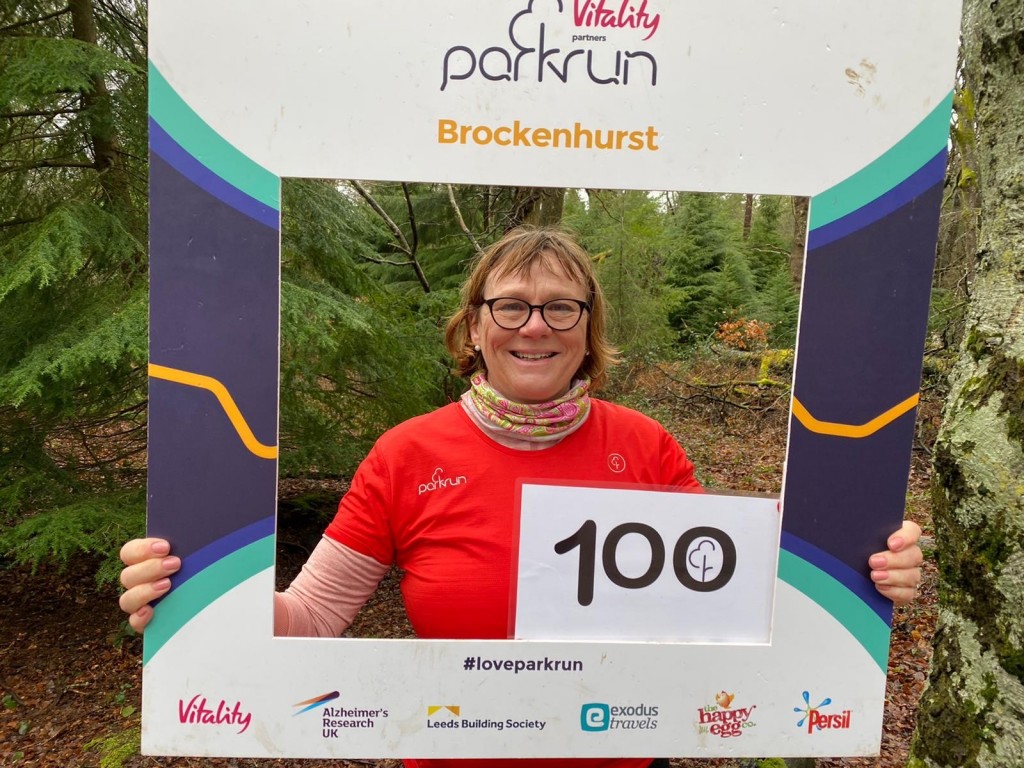 and Martin "The Frog" Baker: 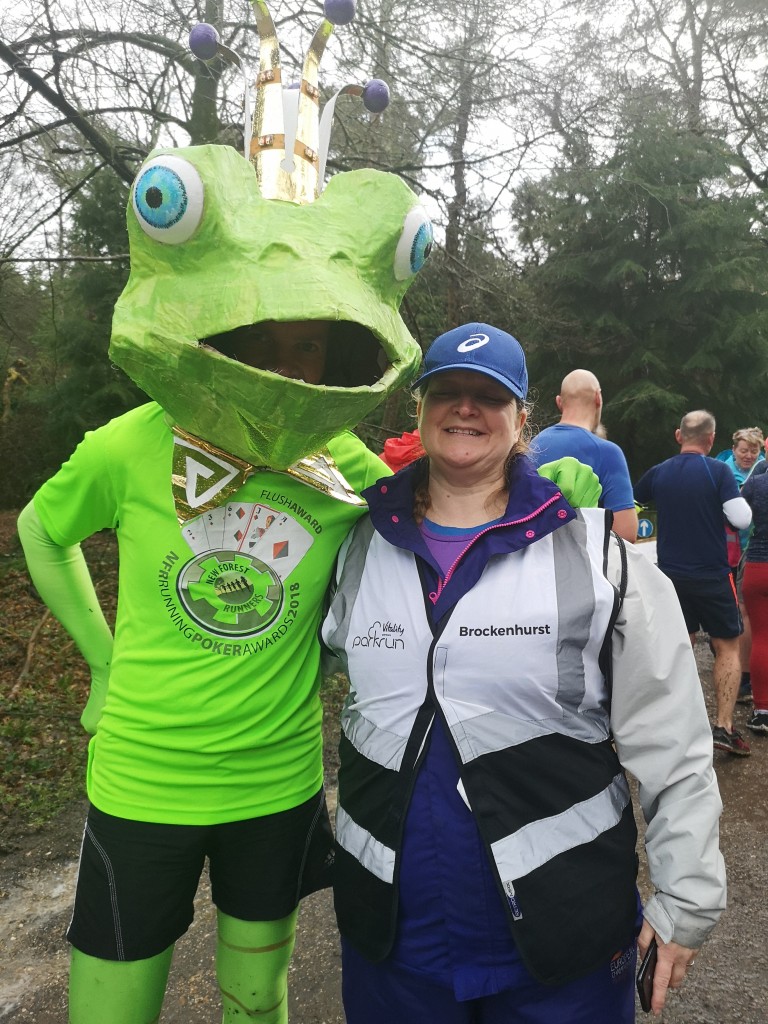 We also had three 50 Milestone runs including a very special one for W16 Emily James running her 50th parkrun on her 4th Birthday! Yes Emily is a Leap baby. What an honour to be able to host a Leap baby at a Leap parkrun. Hope you are still running on your 11th Birthday to get your 2nd birthday parkrun Emily: 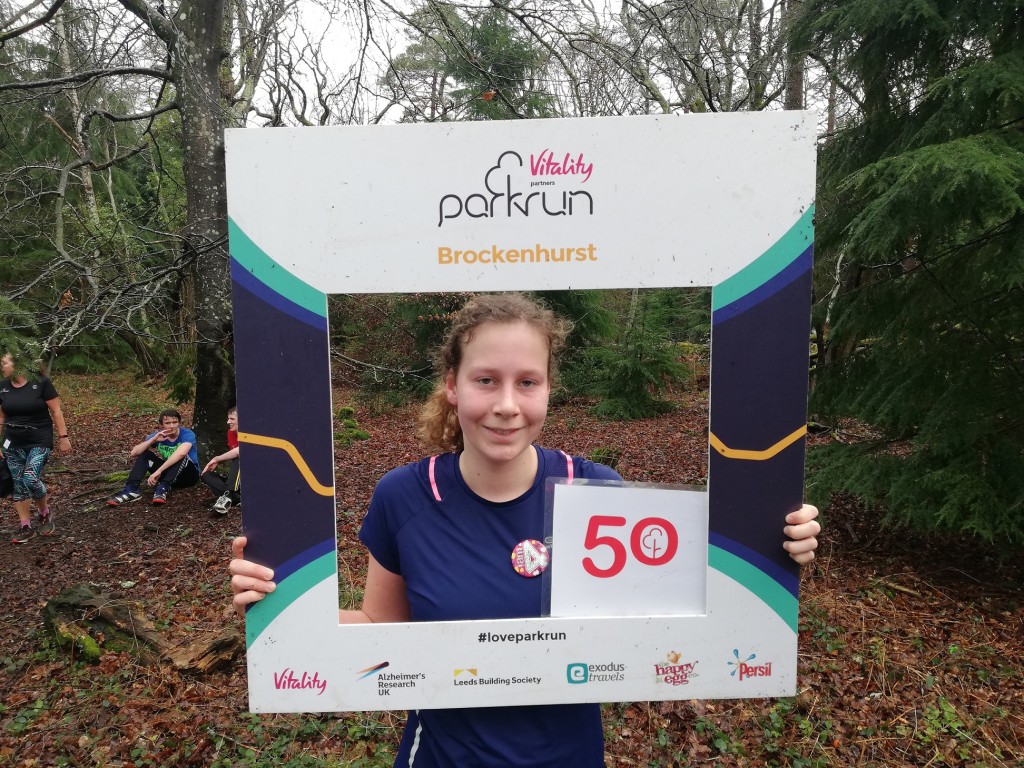 The other two 50 Milestones were from M55 Mike Brierley and first time visitor M45 Roger Kirkham with both evading the Milestone Selfie frame.

There were also two unofficial 150 Milestone runs from M45 Jason Oakley and regular W45 Carin Dear who has run more than half of hers at Brockenhurst.

brockenhursthelpers@parkrun.com and we’ll include them in this Report.

Our thanks go to the 17 volunteers who made this morning’s event possible:

Well, we were back Yay! after the storm put paid to last weeks Brockenhurst parkrun and although it was still breezy 190 people ran, jogged and walked the course. 53 were first timers and 12 recorded new Personal Bests. Representatives of 33 different clubs took part. Visitors from South Croydon, South Yorkshire and South Africa enjoyed the windy but dry run.
Our winter course has had plenty of Forestry work in the Wilverley enclosure recently and the recent storms sent a number of tree crashing to the ground across our track. Some clearing and restoration during the week allowed Adam Jundi, who ran his 100th parkrun today, to cross the line as first finisher for the 48th time, this time in 17.22m. Val Sesto was first lady in 20.35m.
Adam and Val both topped the male/female Age Grade list this week too.
Dave Watson, first timer at Brockenhurst, decided it was a great place to run his 50th parkrun, hope to see you back soon Dave.
Max Davis JM10, a regular junior runner here ran his 25th. Good luck to Max when he runs in the National Championships next month.
Adam Jundi in his 100 frame :