I remember my first visit to the New Forest as a child. From the early glimpse of purple heather, rolling hills, soporific ponies and the underwhelming Rufus Stone, I fell in love. In Minstead churchyard lies the grave of Sir Arthur Conan Doyle, famous author and creator of the fictional super-sleuth Sherlock Holmes. Beneath the stone cross is a Sherlock pipe and the inscription ‘STEEL TRUE, BLADE STRAIGHT’ reflecting on his knighthood. Conan Doyle also wrote ‘The White Company’ a book stuffed with adventure and chivalrous knights, which is partially set within the New Forest; Brockenhurst is mentioned several times on the lead character’s journey.

After the long drive from Norfolk, I arrived at Stoney Cross Travelodge with a new-found appreciation of Watford post-punk legends, Sad Lovers and Giants, a 5 CD boxset getting me through the tiresome journey. On parkrun morn, a rude awakening by the thunder of traffic from the adjacent A31, jolted me into action. The windscreen ice scraped off, I slid my way along the frozen lanes through gothic mist, roadside heather bushes crusted with frost. Arriving at Wilverley Inclosure, the sharp sunrise was spectacular, repaying an early start. I didn’t have time to find the Naked Man, the famous stump of an oak tree just to the north of the Inclosure and not a naturist! The oak is said to have had a gibbet in its pomp, in which highwaymen were left to rot. A ‘naked run’ is one free from any devices such as running watch and earphones. I’ve run naked several times and it’s an unsettling experience having no idea of the finish time as you pass the timekeepers. It does make the parkrun email later in the day a nice surprise though! Go on, try it!

The undulating parkrun course looked like the kind of trail run which I ‘enjoy.’ Not particularly quick, but a challenging run with muddy ruts created by forestry vehicles in recent wet weather. We were lucky to be running; over 40 parkruns had been cancelled due to flooding and the overabundance of mud. Run director, Sue Tizard, did a sterling job with her first briefing via megaphone. Tourists came from as far away as Gorleston, Woking and South Africa. There were many milestones among the 239 athletes. New members of the 50 Club were announced: Si Price, Terence Earney and Luke Linney, congratulations to all. An incredible five runners joined the 100 Club: Vivienne Baxter, Paul Kingston-Davies, long-time run director Mick Anglim, Mark Linney and Matt Cafferky. Well done to the famous five!

The run wasn’t as treacherous underfoot as expected. Consequently, there was a stonking run by first finisher Adam Jundi (17:23), closely followed by lightning 12 year old Jon Pepin (18:10, 81.83% age grade). The female first finisher was Ellie Marie Monks (18:58), the fenced-off Inclosure not able to contain the Southampton AC speedster’s pace! An influx of 53 first-timers was a heartening sight, particular mention should be made of Under 11 Duggie Monger (45:10) completing the difficult course with his father, Pete. It’s a tough course to pick as your first parkrun, which makes the achievements of every one of the first-timers special. Welcome to the parkrun family and don’t ever give up, it will feel hard at times but you’ll quickly improve. A total of 109 runners beat the poet this week (26:57), the waning writer struggling with hills unknown in flat old East Anglia.

I would highly recommend Brockenhurst parkrun, even if flatter ones are available, just for the sheer enjoyment of running in the beautiful New Forest. Of the 48 different events I’ve run, this is in the Top 5 most picturesque along with Blickling, Moors Valley, Rutland Water and Sheringham.

And now for something completely different: a flurry of 3-line haiku poems inspired by the wonderful run in Wilverley Inclosure and the New Forest.

New Forest?
nothing wrong
with the old one

up and down
like a fiddler’s elbows
my elbows

downhill sprint
a stream finishes
ahead of me

Others have been similarly inspired to write, this is my 9 year old son Joseph’s (himself a parkrunner) short poem about the New Forest:

I was walking through a lifeless wood,
that’s what I thought anyway,
I listened to birds singing,
and I walked through leaves.
But I could not see the flowers
for the blind man I was.

This week 239 people ran, jogged and walked our muddy course, of whom 53 were first timers and representatives of 27 different clubs took part.

Congratulations to the impressive 23 who recorded new Personal Bests despite the surface mud left by the Forestry lorries and to M40 Adam Jundi who led the field home for a record 45th time! Our first lady for the 10th time was W35 Ellie Marie Monks of Southampton AC who is also our double female Record holder for our two courses (as shown below).

Our top Age Grade score was set by second finisher M11 Jon Pepin who set 81.83% and was just 21 seconds from his Brockenhurst PB despite the mud!

We were treated to to 8 official and 2 unofficial Milestone runs today:

Top of the list was M70 Paul Woods of Christchurch Runners who ran his 200th parkrun with just 3 at Brock.

A far more regular runner and Volunteer is M50 Darryl Stevens of Fairlands Valley Spartans AC who ran his 150th with 57 Volunteer days to his credit including many as Tail Walker.

We had 5 runners earning their 100 T shirt today with four of those in the photo below.
From the left M70 Mick Anglim of Hardley Runners has been our Event Director from the formation of Brockenhurst parkrun and has take over 9 years to reach his 100th run and his 310th Volunteer day.
W45 Vivienne Baxter takes the Loyalty Award having run 97 at Brockenhurst!
Next we have to thank M45 Mark Linney of Christchurch Runners for the hot drinks and refreshments. On the right is Run Director, M35 Matt Cafferky of New Forest Runners, has taken 6 years to reach his 100th with 56 Volunteer days to his credit.
Missing from the 100 Milestone photo was M40 Paul Kingston-Davies who has an almost equal split of parkruns between Brock and Lymington. 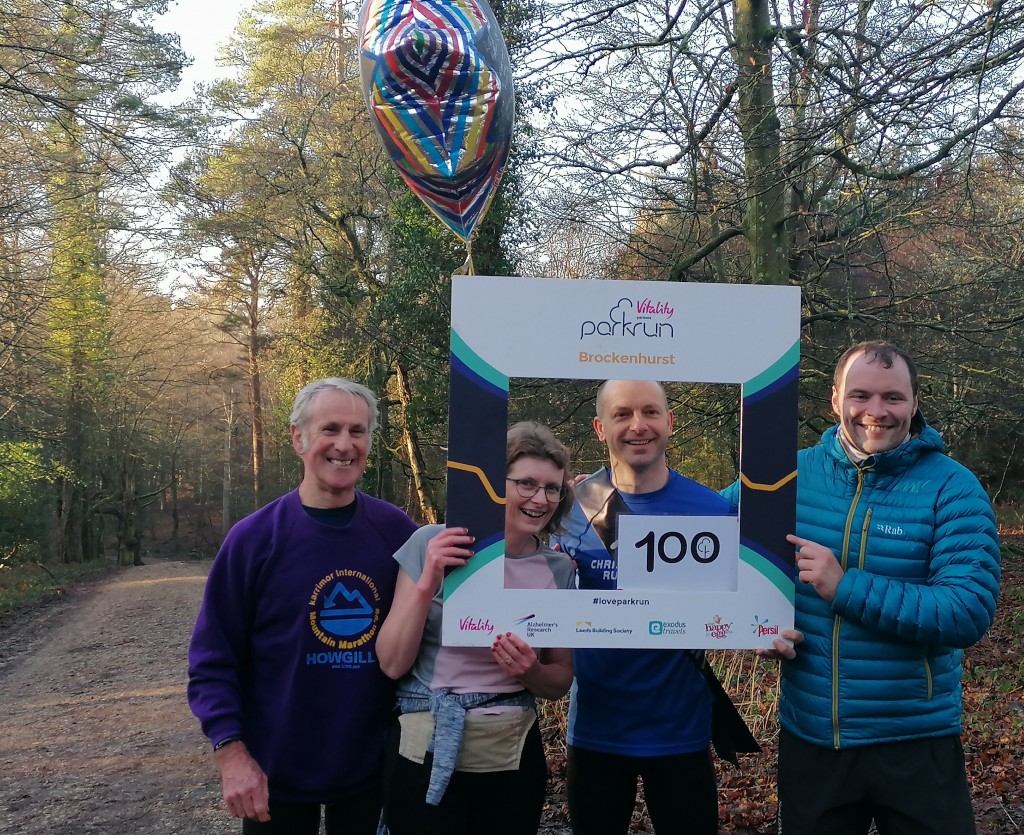 The Linney family had a double Milestone to celebrate as son M17 Luke earned his 50 T shirt today: 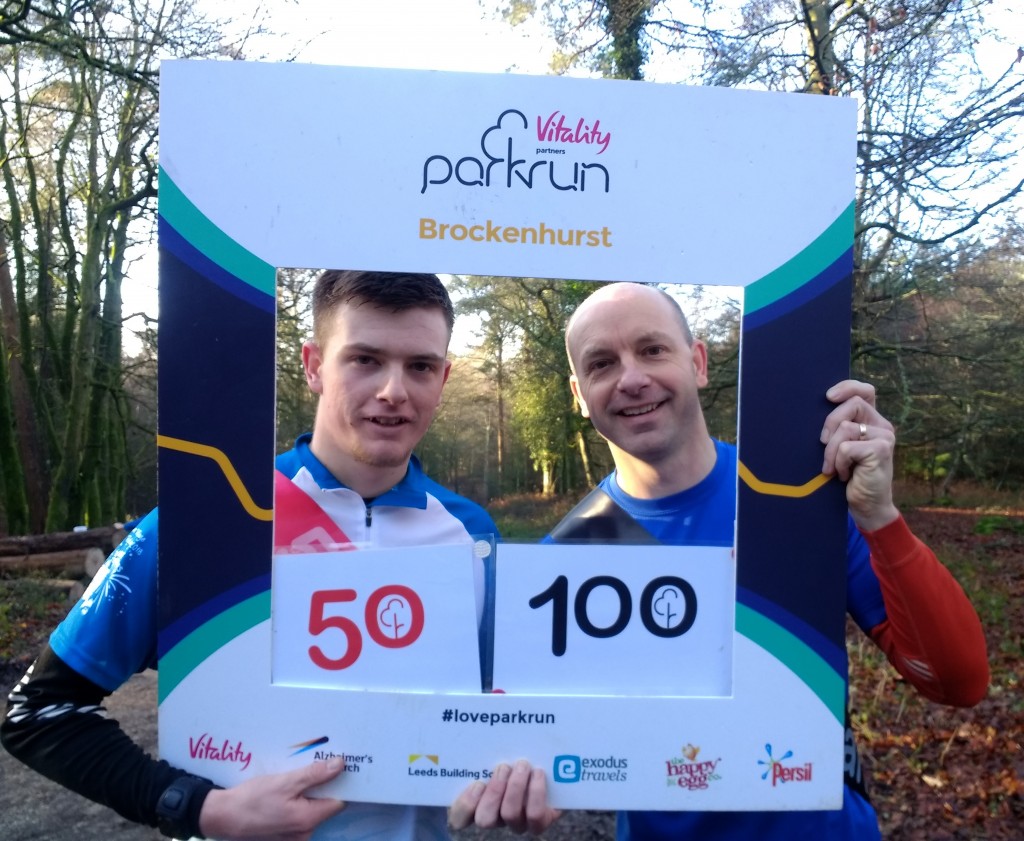 Another 50 Milestone runner was M70 Terry Earney of Hardley Runners who has run 47 of those at Brock: 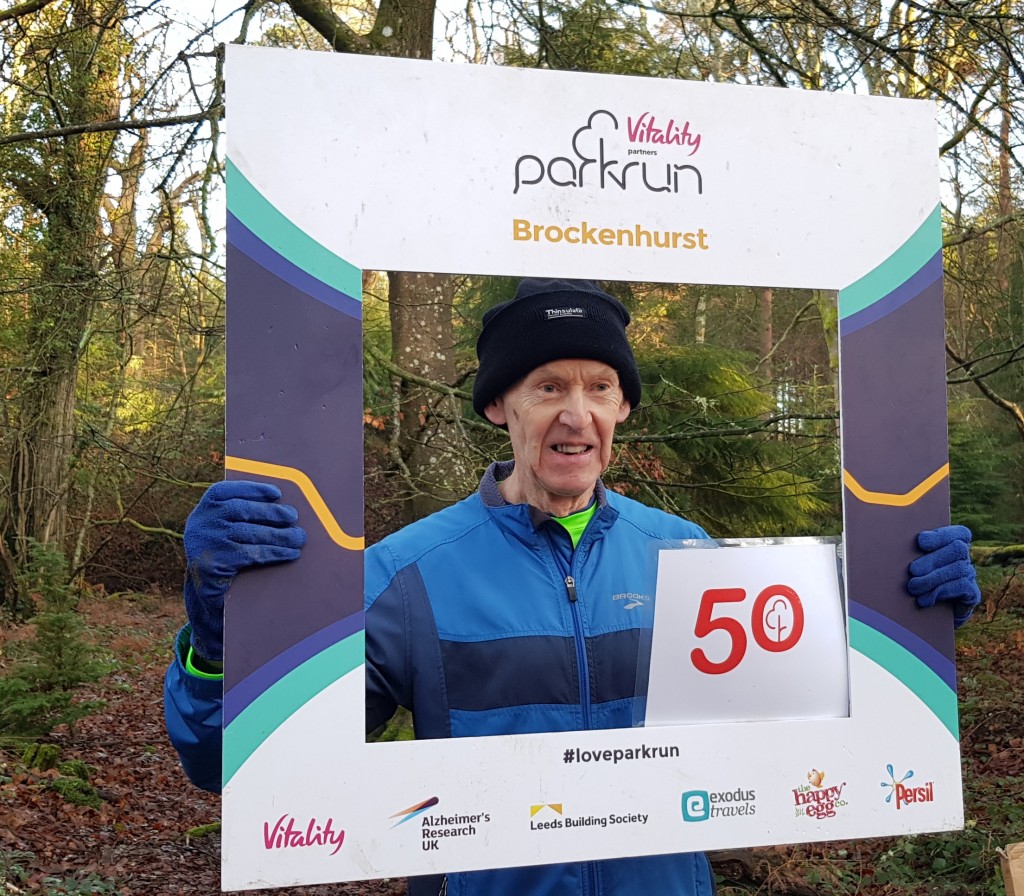 Our thanks go to the 22 volunteers below who braved the freezing cold to make this morning's event possible. Special thanks to our Timekeepers Chris Potter and John Abbey who produced a perfect set of results despite frozen fingers and to Glenda Monson who marshalled the final T junction with a broken collar bone! Thank you and enjoy Cape Town Glenda.