The sun shone brightly on event 478 as 599 people took to the paths of Brueton Park.

Are you keeping up???? This would have been SO much easier with a Venn Diagram!!!

Special mention has to go to Kevin Tomkinson who PB'd on his 373rd parkrun in a time of
23.16. Very impressive. Really well done.

For me, the biggest PB surprise of all was that I was one of them &; in one of the ‘special’ PB groups! Obviously, I was not a top 10 finisher…that will never EVER happen, even if all the fast runners stayed in bed, but, somehow, I managed an 18 sec PB on my 212th parkrun thereby proving that miracles do happen & once again showing that, for me, this running lark is a complete enigma. I never know how it’s going to go until it’s gone!

My unexpected PB aside, it was a day of celebration for the Boot family as my lovely husband, Steve, was completing his 100th parkrun as tail walker. Well done, my darling, I’m immensely proud of you. In the same way that I eventually plucked up the courage to try parkrun after coming each week to support our son, Louie, Steve also took up parkrun after supporting me & Lou in our weekly scamper round the park. And here he is 100 parkruns later. He said he’s going to ‘retire’ from parkrun now, but we all know that he’s not going to get away with that ‘cos Saturday isn’t Saturday without parkrun. 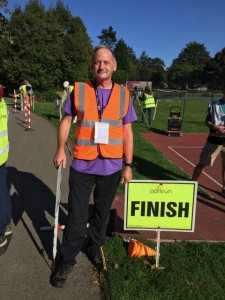