Report
Mum says we’re going to do parkrun this morning. No idea what that is but with the words, “Park” and “Run” in the title, it has to be good, right?

The park is unusually busy for such a soggy morning and the ratio of humans to dogs is highly irregular, so forgive me if I’m feeling a little bit sceptical right now. Although there’s a tall handsome looking fellow sporting a shiny red collar over by the tennis courts, must try a sneaky sniff of that butt if I can get close enough.

Ok, so we’re all gathered here, what happens now? Wow! Who knew humans could move so fast! Maybe this is going to be fun after all.

This is so cool! Thirty minutes later and mum’s still running with me, I’ll remember this next time she asks me to fetch the tennis ball, she’s perfectly capable of doing it herself.

It’s finished and everyone is telling me what a “good girl” I am, and making a fuss of me. Could this get any better! I can’t wait until next week, when apparently I get to do it all again. I’ll have to remind mum to keep me on my short lead though, as I spotted a couple of tasty looking squirrels along the way, which could easily have distracted me and I’d hate to trip anyone up.

Anyway, I’m off to introduce myself Mr Shiny Red Collar, hope to see you all soon. 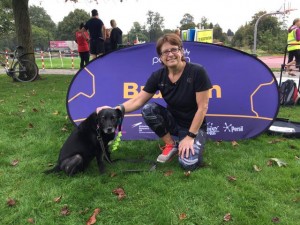 On my next birthday I shall be a sprightly 11 years of age.
In 11th place today was Chris Hogg completing his 178th Parkrun, whilst in 178th place was Sue McKeon completing her 11th run, in a time of 29:11.
In 29th place today was David Rice, setting himself a new PB, congratulations.
Also achieving a PB of 23:05 today was Samuel Stutton, finishing in 42nd place, crossing the line just in front of first timer Colin Way. Welcome to Brueton, I hope you weren’t put off by the weather.

All PB's this week;