This was a very special parkrun for all of us at Brueton. It was our 500th event, nearly 10 years after our first. On arrival, it was immediately obvious how many people had been able to wear blue as requested, to match the 500 parkrun shirt. It was a sea of blue!
We had an almost record-breaking 748 people who turned up for the occasion, running, jogging and walking the course.
The pre-event briefing was a bit different as the Mayor had come to watch and our esteemed Event Director Andrew LUCAS treated us to a bit of song, albeit with some reluctance! Brueton stalwart Sandra BOOT had rewritten the lyrics to the classic 500 Miles by The Proclaimers. Andy made a few changes to the lyrics and we simply had to share them in this run report: 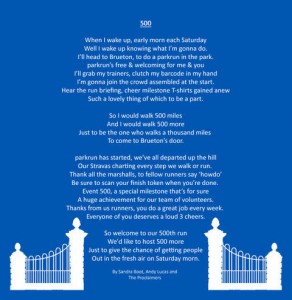 Great job, both of you.

5 Random numbers
As it was event 500, in position 500 was Christopher LINNEY, one of 69 participants
to achieve a new PB. Well done Christopher!
Finishing in 69th place was Gary WHITEHOUSE. We had 92 first timers, including a group of tourists from Kingsbury Water parkrun – welcome to them!
In 92nd position was Gail AUDHALI, herself a first timer at Brueton. Gail was the 7th of 347 female finishers,
and in 347th place was Lianying CHEN.
Representatives of 45 different clubs took part and finishing in 45th
was Gareth DANIEL.