The sun shone, and out came the bright eyed, the hopefuls, the not so hopefuls and the hungover in their droves for another Saturday morning extravaganza at Britain’s most friendly parkrun! A massive 163 participants clearly know what’s best!It’s not a race, of course, but in the desperate battle for “1st finisher” the lead changed hands between three runners in the final mile. Mark Blevin’s strategy of “listening for heavy breathing” before making his breakaway failed as heavy breather Steve Colclough came back from third place for a thrilling win. The ladies, not to be outdone produced another classic with Burnage legend Aeronwy Craig being pipped by three seconds by Laura Biddle with a huge PB.Every performance is a notable performance, and amongst the many PBs this week, special mention to veteran 65 George Pantelli - still setting a PB on his 55th time out. In addition to George, 26 other people recorded new PBs!A few milestone runners this week: Stephen Lyons on 50 who has done them all at Burnage! Stephen Symons, a Worsley Woods regular, defected to Burnage for his 100th and David Laycock also recorded his 50th and brought some sweets for the volunteers and a sweetie spot prize for Robert Dickson who finished in 50th position! 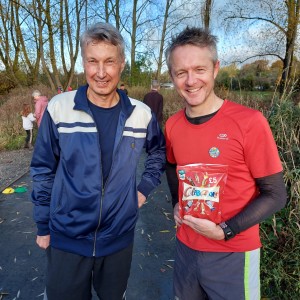 Come back again, please!But really, what would the parkrun be without those amazing volunteers? Not just ensuring it runs like clockwork, but also fervent cheer leaders, encouragers and commiserators at every turn.It all looks to run so smoothly, that it must be too good to be true I thought. so I took it on myself to look closer and see what it was really all about.It was a surprise that there is a classic hierarchical management structure in place, with roles such as “token support person” reporting to the “funnel manager” who reports to “run director”. Director this week was Mark Fearnley who was offering runners the chance to touch his trio of recent marathon finishers medals!What of the ones out on the course? The “M8 - Pylon/Acorn left turn” marshal sends the runners into the puddle strewn wasteland with an encouraging shout, the “M7 - Top of Steps” marshal provides counselling for those who want to stop after they emerge from the infamous woods and stairs (and mouth to mouth resuscitation for those who should have stopped).The roster of 30 is made up of regular heroes such as Sue Towey (assisted by 4 year old Eva) who cheerily volunteer every week joined by much needed occasional recruits without whom there would be no run.

This week, some of the vital positions were entrusted to a foolhardy bunch of regulars who were doing Cross Country in the afternoon but still couldn’t bear to miss out - so they volunteered at Burnage instead. I shan’t name names, but can report back that in general they tried their best, did a grand job and with a little more concentration in some areas (ie, less chatting and more working!) organisational perfection is close at hand.All in all, an eye opener into the Merry band that make it all work week in/week out. Don’t just take my word for the wonderful job they do. A first timer was heard to say thanks that they had all been so amazing and welcoming that she would return again.So, raise your metaphorical glasses and shout “ three cheers for volunteers”!

This week's run report was brought to you by Burnage regular Lord Didsbury (pictured above) who was busy celebrating his birthday as well as participating in parkrun and writing this fabulous run report.

We will not be running on New Years Day.

We will not be running on Christmas Day.

A calm and cool morning for all the runners and volunteers. Firstly, a massive THANK YOU to all of our volunteers this week who were as helpful and enthusiastic as ever! We cannot put this event on without you, and all of the runners love the support you give on the way round the course.

This week, we had 140 runners, 17 of whom were first-timers and 40 who recorded Personal Bests! We also had a major milestone with Mike MARTIN completing his 250th run!

Look forward to seeing you again next time!

Our event today was made possible by all of these volunteers!

A perfect day for running and also volunteering.

A massive THANK YOU to Jo Herd for donating a First Aid kit to replace our Ikea box, this will be at the start and finish area every Saturday but let's hope we don't have to use it.

Next week Lawrie Gloster takes the reins as Run Director for the first time so please support him and get your name down on the volunteer roster.

We also had a black top left on the bench, this will be in the blue bag next week if you want to collect it.

We had 135 participants, of whom 23 were first timers and 24 recorded new Personal Bests.

Today's full results and a complete event history can be found on the Burnage parkrun Results Page.