Apparently there is a large music festival taking place fairly close by and it has come to my attention that a number of our stalwart volunteers and regulars have traded their trainers and vests for several days slumming it in a field amongst the great unwashed, whilst "listening" to some of this 'ere "Modern Music" stuff. Well, I cannot understand it at all. As far as I am concerned these modern bands like the Rolling Stones and the Beatles produce nothing more than unintelligible dross. Whatever happened to Joe Loss and his Orchestra, Val Doonican and Peggy Lee? Timeless classics such as Flannagan and Allen seem lost on the youth of today! But there we have it. And what is this thing they call "Psychedelic Music". The only thing I could think that it relates to is watching Adrian Smith's running shorts going round in the tumble dryer whilst listening to the "Light Programme". But anyway, for those of you, who, like me, prefer the purity of a Saturday parkrun to overly loud modern nonsense will have assembled at Apex Park, for the Burnham & Highbridge parkrun number 293. And, indeed, 205 of you did!

Georgina gets to grips with "The sound of the crowd"!

The show must go on!

The "First Timers" briefing was delivered with her usual aplomb (to 30 first timers!) by our very own Run Director and Sax symbol, Georgina Della-Valle. She then went on to the "Pyramid Stage" to give the usual brief to the assembled throng., during which she welcomed runners from as far afield as Coventry, Stroud, Ashby De La Zouch, Lliswerry, Bradworthy, Lochaber, Long Eaton, Bodmin, Wincanton, Burgess Hill, Newport and Newquay. Following the brief it was time to move them "Further on up the road" to say: 5,4,3,2,1! 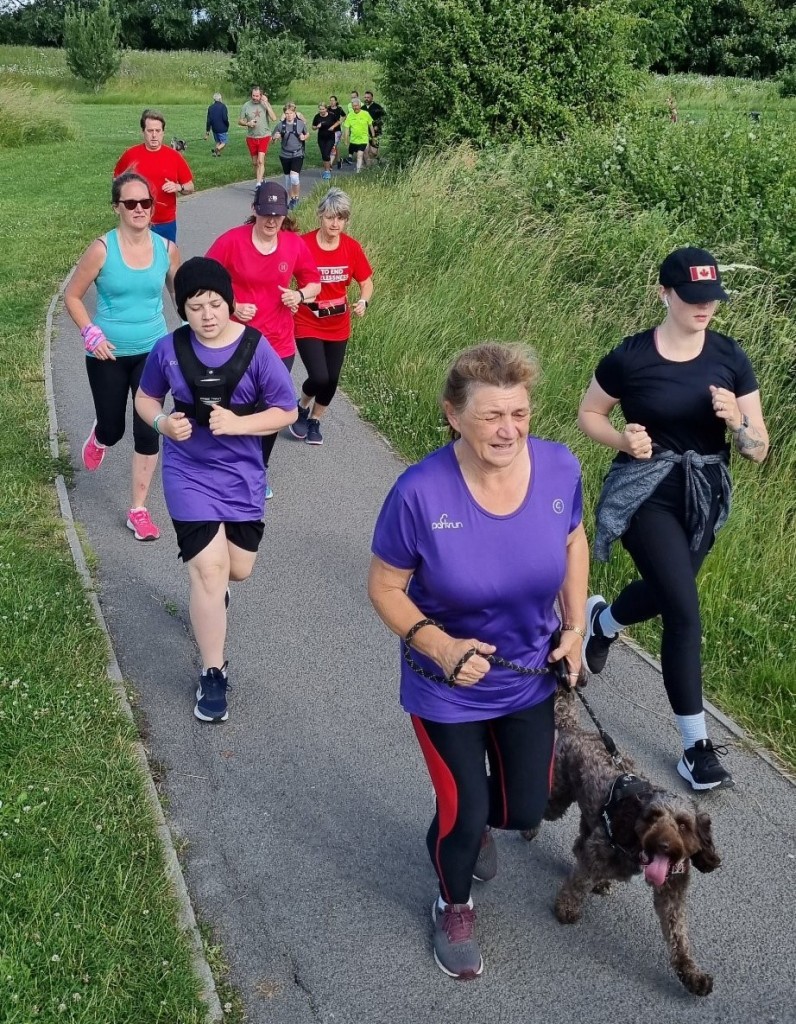 Me and you, and a Dog named Boo!

And then, like a "Bat out of hell" the massed ranks of parkrunners, including representatives of some 37 clubs, headed off into the distance. They were aided and abetted by our end of the month Pacers who were trying to "Beat the Clock" on behalf of the parkrunners who wanted PB's! So "Hopelessly devoted to you" were they that they assisted in the following PB's!

"Congratulations" to you all!

Whilst the runners were actively engaged in "Running up that hill" our intrepid Photographer, Chris Englefield was "Moving on up" around the course and taking a "Photograph of You".  Thanks go to him for a job well done. 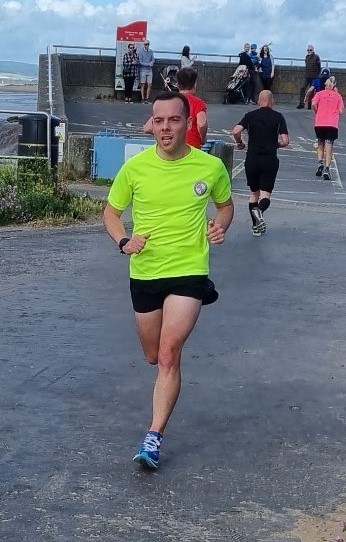 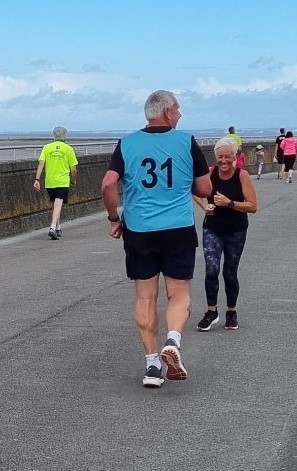 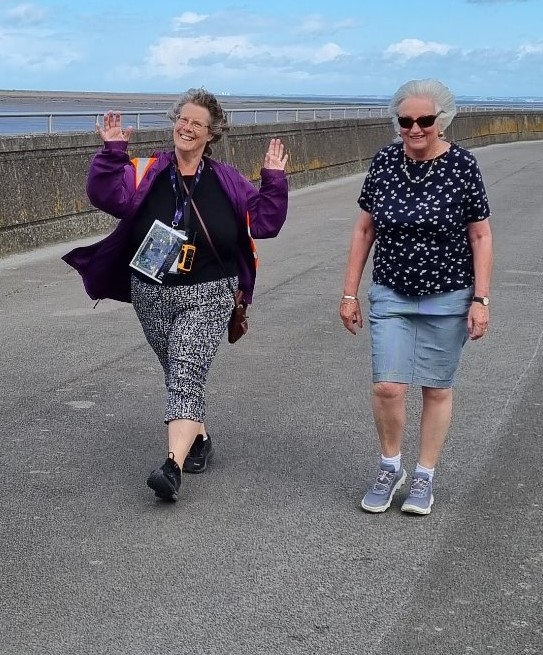 It ain't over 'till its over!

So, That's another successful B & H parkrun chalked off. Our event just goes from strength to strength. Even the lure of Glastonbury Festival could not dampen the spirits of our intrepid parkrunners. Having had a nice long refreshing RADOX bath to soothe my tired muscles I can now settle back into the rocking chair, sup my HORLICKS and reflect on another good day, whilst listening to my favourite album of all time. Oh no, its not by one of those "modern" outfits you would hear up the road at Pilton. No, I am going to crank the phonogram up to 11 and unwind to the sound of "Vera Lynn sings the Hits of Led Zeppelin". Its a classic!

It only remains for your humble scribe to remind you all that parkrun only happens because of the dedication of the Volunteers, who this week were:

And for those of you who can't take a hint!!

If you have not volunteered before but wish to be considered at future events then PLEASE do so. It is great fun and no job is too difficult.  Our Volunteer Co-ordinator, the "getting younger by the day" Mrs Tracey Benton usually has to send a begging Email every week to fill up the rota, so sign up at parkrun on the sheet outside the office, or send us an Email to burnhamandhighbridge@parkrun.com Check the rota first to see our vacancies, and it helps if you let us know your barcode (and the name you are registered with parkrun!) A warm welcome awaits. We are usually short most weeks, so give a little back. You know it makes sense!

The Vital Statistics (For those diehard readers who have made it thus far!) 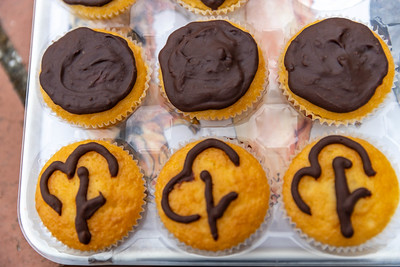 Today was a special event day for Burnham & Highbridge parkrun, as today we turned 7 years old! In 2015 the core team helped bring us the event that we know today, so massive thanks to that team of volunteers, made up of mainly Burnham Harriers running club, we owe you massive thanks for bringing us such a wonderfully successful and popular weekly event.

The "BOSS" Benton
Todays run director and all round BOSS was our very own Tracey Benton. 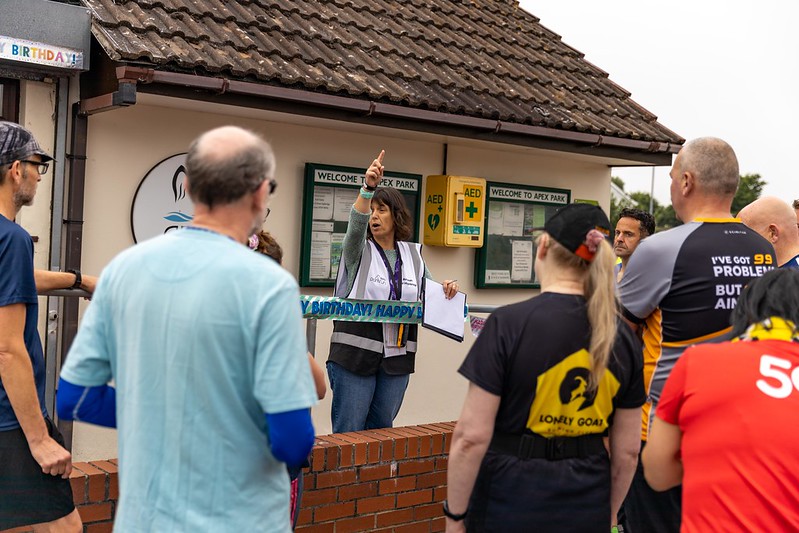 Fancy Dress
To mark this auspicious occasion, we had plenty of people that took to fancy dress and I will post as many pics as I can in this report for your pleasure and perusal. 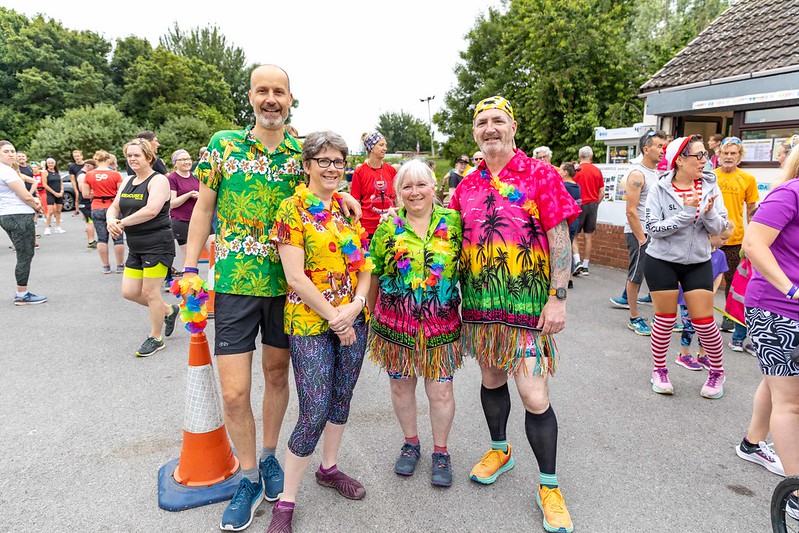 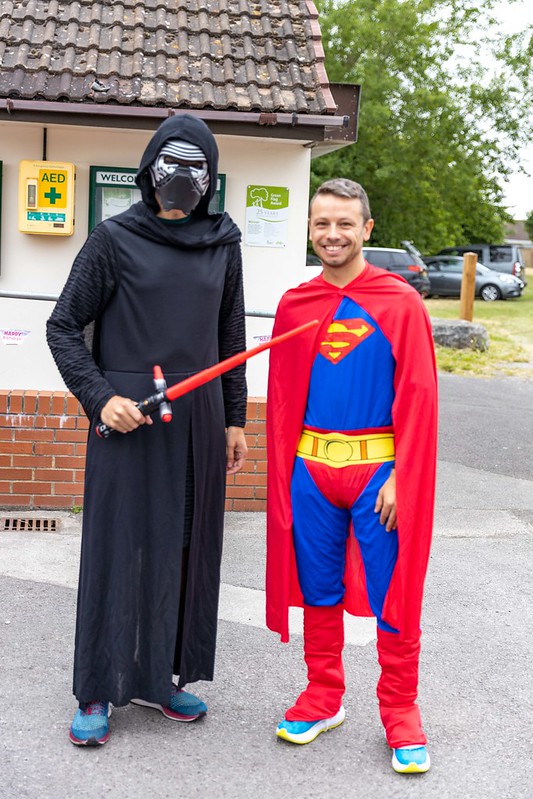 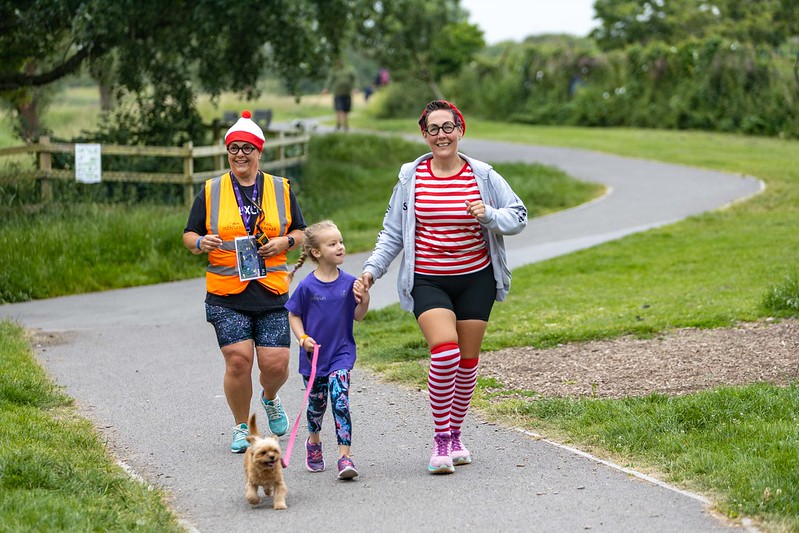 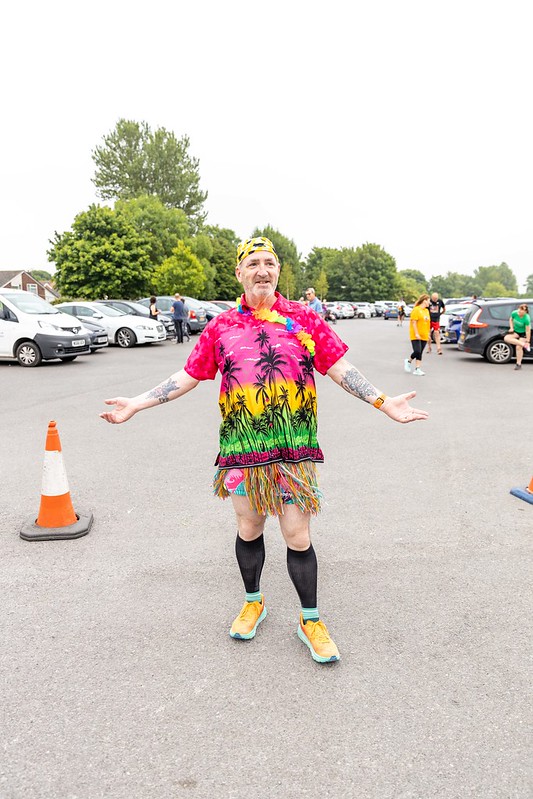 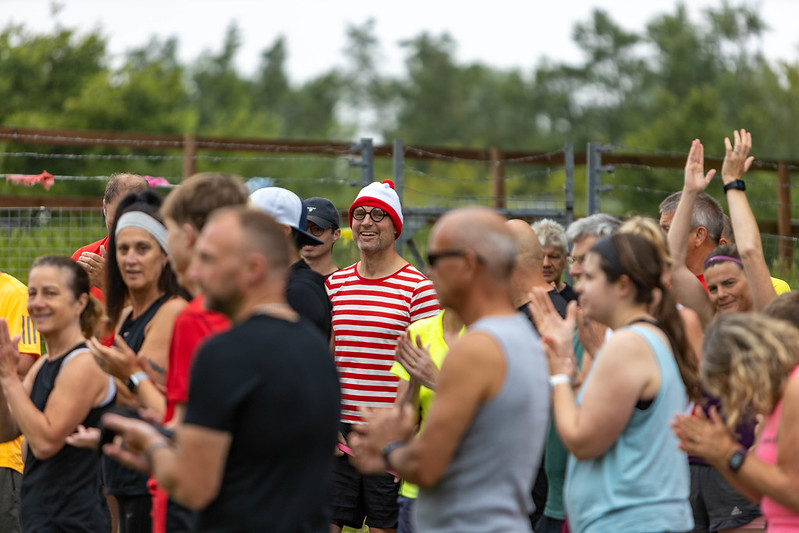 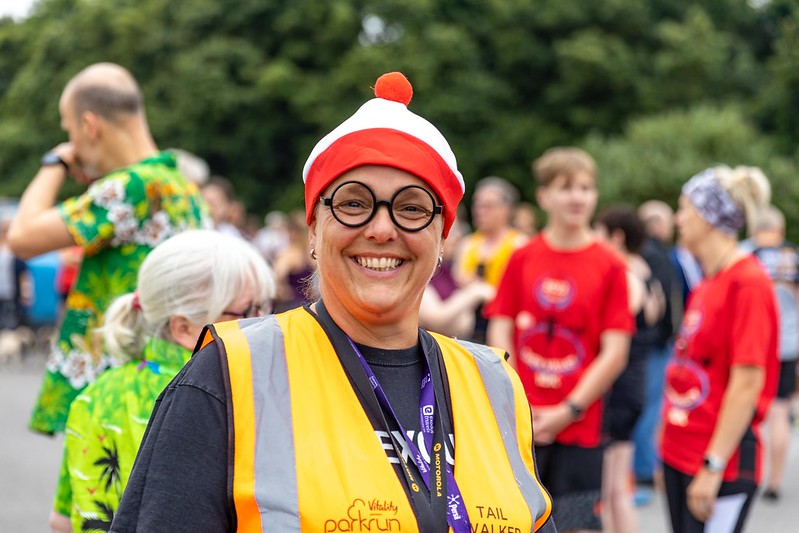 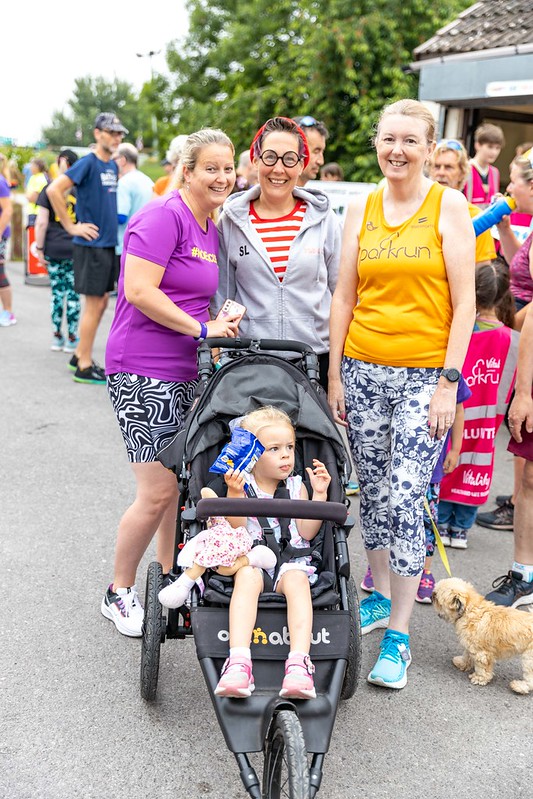 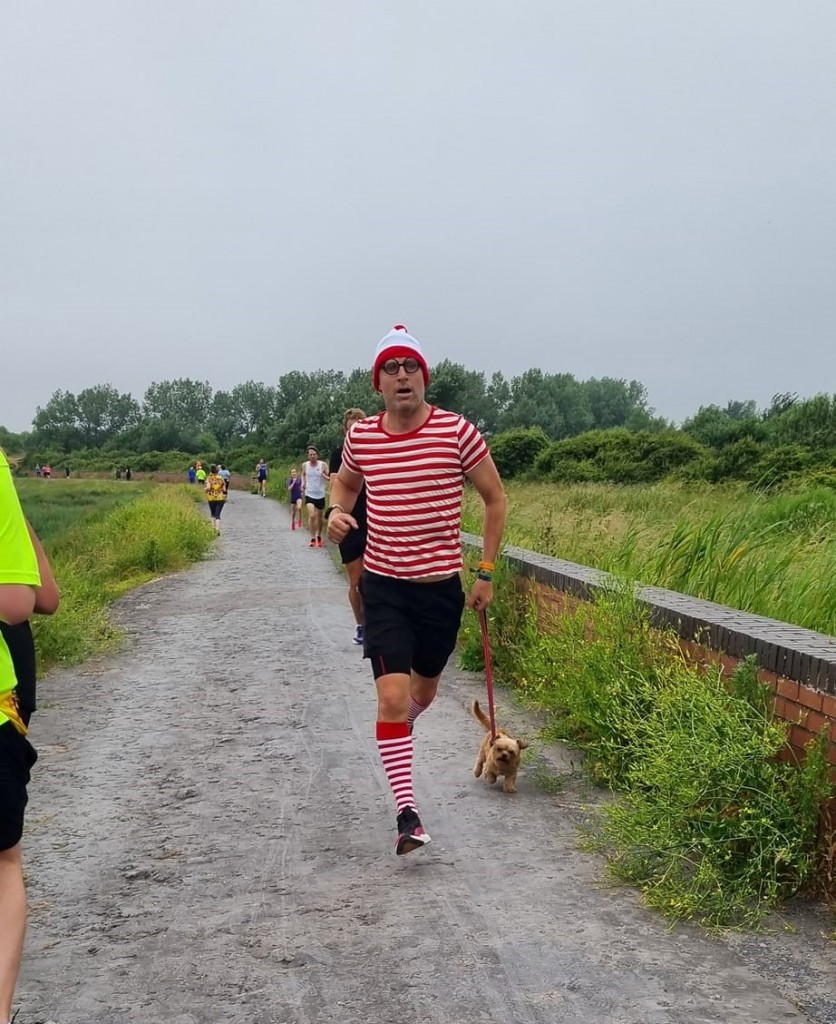 Whilst we are here, I want to do a feature on the most amazing little pooch called “Lottie”, she is a Chorky and is 6 years old. The amazing thing is she regularly posts times around the 20-minute mark and could probably be a lot quicker if her human (James Lucas) wasn’t so slow.  She is so tiny and it’s amazing how fast she runs, and she loves it too. Got to be one of the fastest little pooches I have ever seen. LOL

The Stats
This week 213 people ran, jogged and walked the course, of whom 27 were first-timers and 19 recorded new Personal Bests. Representatives of 30 different clubs also took part.

Our most accomplished parkrunner today was Alan Wilcox from North Bristol Running Group with an amazing 503 parkruns.

The people listed below gave our course their all and have managed to beat their best time, so all deserved a mention.

Every week there is a call out for volunteers, so if you can give a little time, please do so, each role is not difficult and it can be very rewarding.  Come and join the hi-vis heroes below!

The event was made possible by 23 wonderful volunteers: 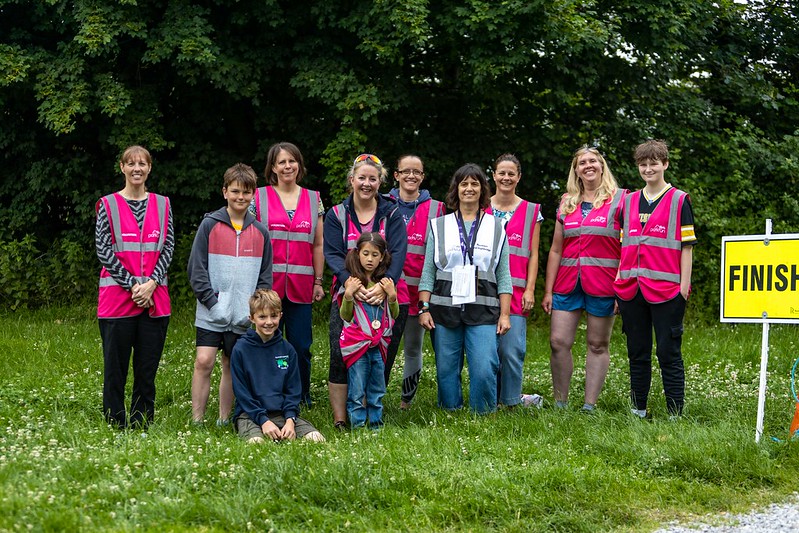 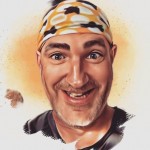 Another warm one, and its a purple DAY!!

As usual, the course at Burnham was superb, nothing new there seeing as it’s one of the best, if not THE best in the country. Some parkruns are a memorable experience due to the course's beauty and the volunteers' friendliness, so that describes this parkrun to a tee! So just keep on coming to B&H parkrun. No bias here, I assure you…….ahem.

Today was a wonderful day for parkrun, the sun was shining, the skies were blue, and the Burnham breeze was taking a day off! I even took the decision to wear my 2nd most colourful shorts in a bid to tone it down for Burnham parkruns other intrepid reporter, Bill Monteith, who was out covering another story. (I think he liked the new shorts, proof below)

I will also mention that today one of our own had a significant milestone, and achieved her 25th parkrun, remarkable considering her young and tender age, kudos Evelyn Hamilton, and an amazing achievement. It’s wonderful to see small children enjoying a run at parkrun and we are ever humbled that you grace us with your presence and your cuteness.

The Stats
This week 243 people ran, jogged and walked the course, of whom 20 were first-timers and 10 recorded new Personal Bests. Representatives of 27 different clubs also took part.

Our most accomplished parkrunner today was Alan O’Connor with 437 parkruns.
PB’s today: Each and every one deserved a mention! Remember, it matters not what others do, parkrun is all about you! It’s your run, it’s your time, and the only person you are competing against is yourself, enjoyment and support are what it’s all about, whether that means you try for that PB every week, or you chat all the way around.

Joining the 150 club: (Not an official club but a worthy mention)

The event was made possible by 28 wonderful volunteers:

Remember, no role is difficult, and its very rewarding.  If you want to volunteer for future events the roster is hung up at the office at Apex park and can also be accessed via the parkrun website under Future Roster.  If you are unsure whether you could do a volunteer role then come and talk to us, we can even pair you up with an experienced volunteer to give you the confidence you require, should you require it.  We are a friendly bunch and we don't bite.  Well, not unless you ask us to. 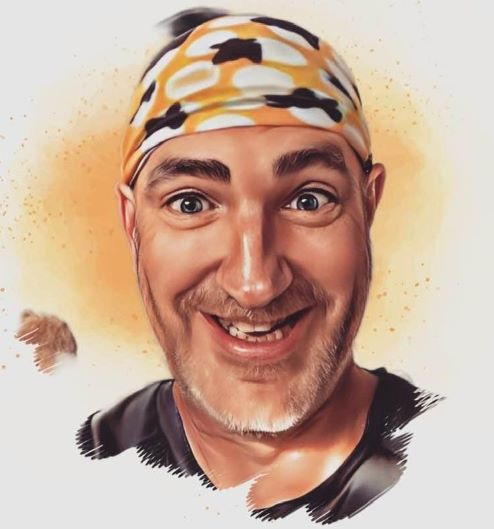 It was the day known as Saturday,
Until that changed to parkrun day.

Lots of people turned up to run,
Others enjoyed some fun in the sun!

There were clubs from all around,
With a photographer watching people flying off the ground!

#NoExcuses had some runners completing couch to 5k,
After they'd finished there may of been cake! 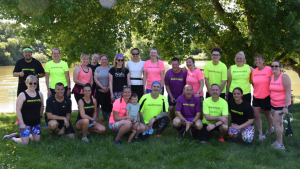 Lots of PB's the course was providing,
Which lead to the participants doing lots of smiling

The pacers worked their magic,
Helping the runners while being charismatic. 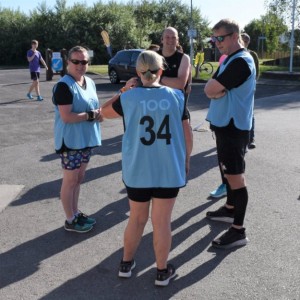 Thank you to all the volunteers,
Who delivered an array of cheers! 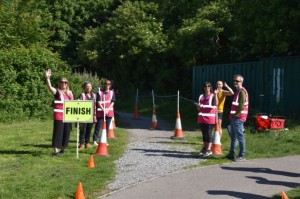 This week there were 282 participants, of whom 39 were first timers and 33 recorded new Personal Bests. Representatives of 37 different clubs took part.

Today's full results and a complete event history can be found on the Burnham and Highbridge parkrun Results Page.