How I learned to stop worrying and love the cold! 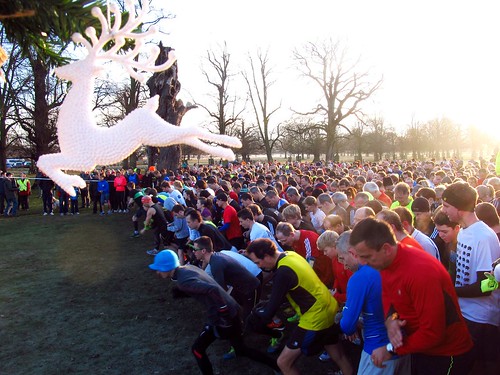 It was another cold morning at Bushy parkrun, not as cold as the previous week, but cold enough! The wintry feel did not affect the attendance at all, as a field of 1,031 parkrunners – the 13th biggest field and largest ever December field, had assembled on Chestnut Avenue, boosted by a big turnout from Thames Turbo Triathlon and Ful-On Tri clubs for their mob match! This meant there were over a century of Bushy first timers – 113 in all, with 60 runners completely new to parkrun, welcome along!

The ground was ‘good, soft in places’ as there was only a light frost overnight, but apart from the muddy first corner just after 1km it was fine underfoot in road shoes. It was a stunning day to enjoy the parkrun course, as the low sun filtered through the trees and low mist.

Andy Wingate took the helm as Run Director this week, and during his announcements he declared it was Verity Riding’s turn this week to decorate the Bushy parkrun Advent Tree in front of the gathered masses on Chestnut Avenue, congratulations Verity! Whose turn will it be next Saturday? You’ll have to wait and see… 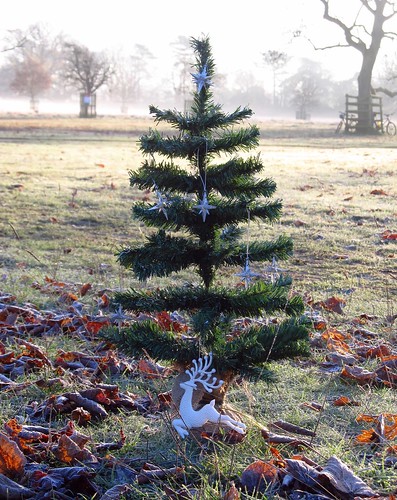 RD Andy was ably assisted by Volunteer Co-ordinator Julie Papworth and a team of 31 volunteers ready to marshal, time and register your run, as well as setup, looking after the kit for a week and writing the run report! If you have ever considered volunteering, don’t be shy, give it a try! Do get in touch with Pat McGrath at bushyhelpers@parkrun.com and he’d be pleased to hear from you! 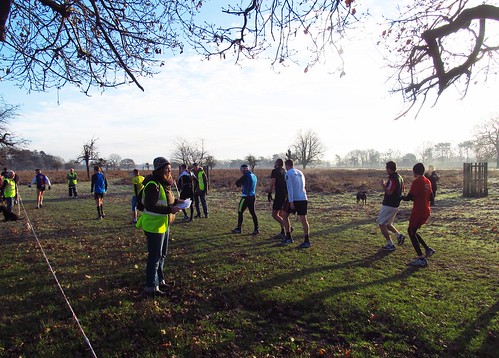 The four figure field at Bushy was certainly boosted by the 77 Thames Turbo Triathlon runners, and 53 Ful-On Tri runners that took part in the mob match, a fantastic turnout! A big thanks to all of you for coming, we hoped you enjoyed your morning and see you again soon! 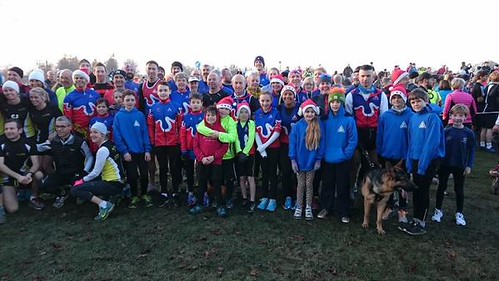 As well as the mob match collective, we had plenty of other first timers at Bushy. 100 club member Alan Graham was making his Bushy debut on his 112th parkrun, with most of his previous runs at Southampton (58 runs) and Eastleigh (28 runs). Alan has also done plenty of parkrun tourism, with Bushy being his 18th different run! Thanks for coming!

Rory Murphy is Co-Event Director at Bedfont Lakes parkrun and he made his Bushy debut on his 95th parkrun. It was good to chat to Rory again, and I know he particularly enjoyed seeing the double funnel in action after he finished! Thanks for coming and especially for bringing the Ferrero Rocher sweets too, all cakes and sweets are always welcome here! 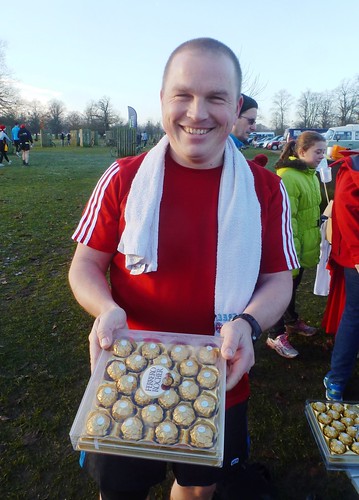 North Down AC parkrunner Steve Wise was making his Bushy debut on his 85th parkrun. Steve has completed most of his runs at Victoria Park in Belfast with 52 there, while he has also run 11 times at Bedfont Lakes, although most of his recent runs have taken place at Bangor parkrun in Belfast. Kathleen Grundy (60 runs) and Ian Grundy (25 runs) had come from Darley parkrun in Derby, thanks for choosing to run with us at Bushy. Lordshill Road Runner Geoff Orme was another Bushy first timer on his 41st parkrun. Thanks to all you for running with us!

Horley Harriers club had brought along a group to Bushy – Fiona Montgomery set a new PB on her return here while Kevin Rice, Lisa Roberjot, Ben Short, Gary Andrews and Nicola Furness were all Bushy first timers! Their home run is Tilgate but they have already done plenty of touring so they clearly have the parkrun bug! Thanks for coming! 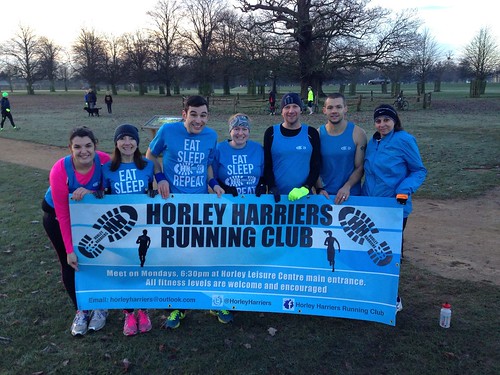 We also had a group of junior parkrunners from Lady Eleanor Holles School Boat Club based in Hampton. Alice Snelling set a new PB on joining the 10 club for juniors, whilst Catherine King, Katie Benson, Gemma King, Alice Woodward-Smith, Charlotte Bowyer, Tara Broekhuizen, Jiyaraj Saggu and Celia Matthews were all making their parkrun debuts! We hope to see you back again soon!

250 club members Tim McIntyre and Sue McIntyre also returned for their first run at Bushy since the tenth anniversary run at the start of October. Their home run is Banstead Woods, but they have done plenty of parkrun tourism across the UK, as well as an overseas trip to Krakow parkun in Poland, thanks for coming!

Another 250 club member, tourist addict and former Bushy regular Becky Thurtell also returned to Bushy for her first run since the tenth anniversary – since then she has run at Panshanger, Harcourt Hill, Tring, Harlow, Harrow Lodge, Walthamstow, Bath Skyline and Brentwood – which was her 101st different parkrun!

There was another new member inducted into the 250 club yesterday, congratulations to Jonathan Melunsky! Jonathan made his parkrun debut back in March 2007 and has run here 217 times, with his other 33 runs at Richmond. Well done Jonathan, you can look forward to collecting your bling shirt very soon! 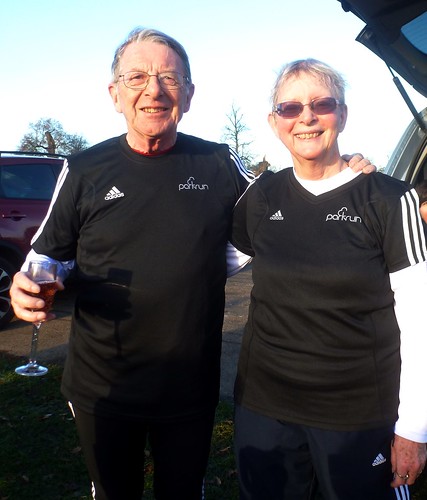 Donald and Joy Bell in their new 100 club tops!

Husband and wife Donald and Joy Bell have been Bushy regulars since 2011, although they have also done a bit of tourism at Crane Park, Pollok Park in Glasgow and overseas at Clermont Waterfront in Florida! They had planned to run their 100th run together, and had brought along some very tasty cakes, it was great to see you both cross the line and have one of your cakes, thank you and well done on your achievement! 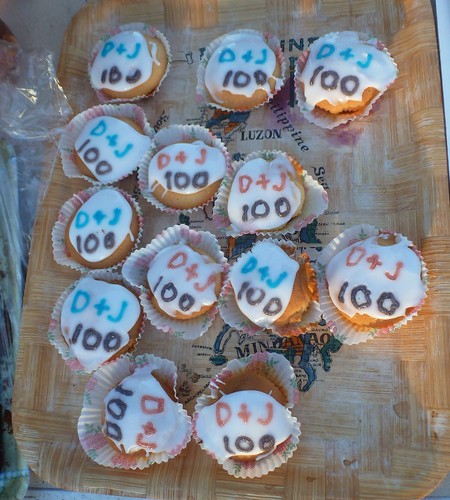 Stuart Amory was buggy running in some festive gear as he joined the 100 club and he can replace red with black very soon! 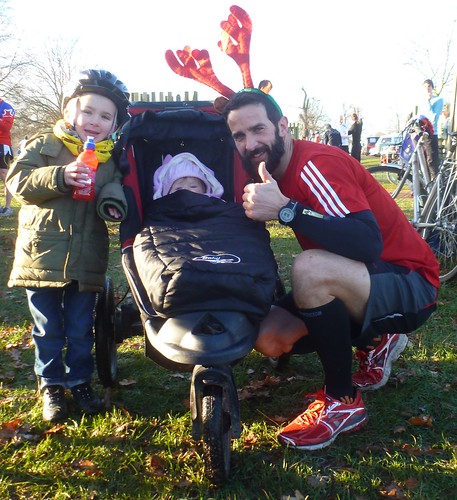 A trio of runners are on 99 not out and could collect their ‘100’ black Adidas tees very soon – Andrew Shennan, Kim Langridge and Sara Shorey!

Two new members of the junior 10 club this week, well done to: Luke Lawrence and Alice Snelling – who ran a new PB on her 10th run.

For more info on the parkrun clubs and how to qualify for a t-shirt, visit the parkrun support FAQ and read this week’s parkrun UK newsletter regarding the latest news on club t-shirt distribution plans for the future.

Suzan Baker was again giving out some of the backlog of t-shirts this week, which had not been previously claimed. If you are one of the people that were mentioned on the recent Facebook post and haven’t yet come to Bushy to collect your club shirt, Suzan will be giving them out again next Saturday (20th Dec). So if you are one of the lucky ones on the list then please come on down to Bushy if you can, and then you can get your top before Christmas! 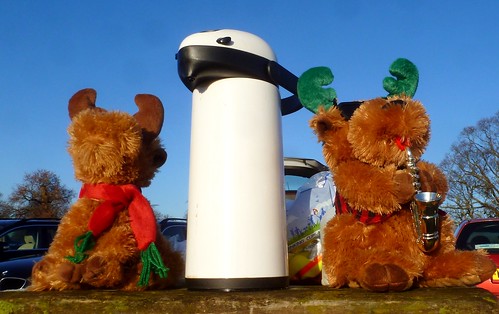 Of the 112 PBs set yesterday, just one was from a parkrunner with more than 100 Bushy parkruns under their belt, so well done to Darren Franks (127 runs at Bushy, 128 runs overall). Darren ran 21:14 to take 13 seconds off his previous best. He has set five PBs in his last 10 runs, taking off nearly a minute in the process. 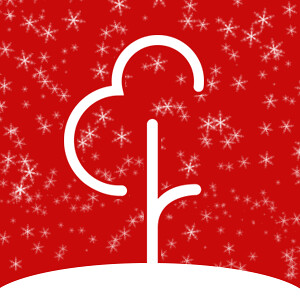 Now That’s What I Call A Stat Attack!

This edition of Stat Attack looks at a Bushy parkrun record which has stood since December 2013 and looked like it would last for a long time, but just 12 months on it is now looking perilous! That record is for most consecutive parkruns at Bushy, which is currently 84 by Stewart Rose, which he completed between 26th May 2012 (event 412) and 21st December 2013 (event 495).

However, John Woods ran his 83rd consecutive Bushy parkrun yesterday, a span which dates back to 1st June 2013 (event 466). Barring anything dramatic happening during the week, John will equal Stewart’s record on Saturday, and is set to take the record on Christmas Day! This level of dedication does require some planning, making sure holidays don’t get in the way of Saturday morning plans whilst staying healthy and fit! Should John wish to set a longer record (which I think he does), he would reach the milestone of 100 consecutive Bushy runs on March 28th.

It should be noted Stewart may be already be planning on a long consecutive run of his own again, as he hasn’t missed a Bushy parkrun since 5th April 2014 (event 512), a sequence of 37 runs!

Ramona Thevenet is also on a long streak of consecutive runs at Bushy parkrun. Saturday's event was her 40th in a row since event 509 on 15th March 2014! Ramona has missed only one of the last 66 Bushy parkruns dating back to event 483 on 28th September 2013!

So those were some of the headline makers and record breakers, but how did the rest of you do? 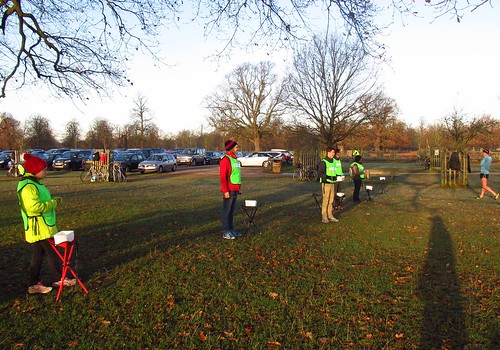 Drum roll… for the second time in a fortnight, the first finisher was… Unknown Athlete! Don’t forget your barcode next time please – no barcode, no time! The first registered runner to cross the line was Straggler Paul Lowe, who ran 16:11 (80.64%) on his 109th parkrun (81 runs at Bushy), and he was closely followed by another Bushy regular – Andrius Jaksevicius, as he ran 16:17 (80.31%) on his 109th parkrun (93 at Bushy), just two seconds outside his PB which he set last week. Completing the sub 17 finishers were two runners from the Ful-On Tri club, as they were competing with Thames Turbo Triathlon in a mob match on the day. The first of these was Bushy first timer Charlie Elliot running 16:44 (78.39%) on his fourth parkrun, and he was followed by fellow Ful-On Tri club member and another Bushy first timer Johan Olivier in 16:59 (76.55%) for his third parkrun. 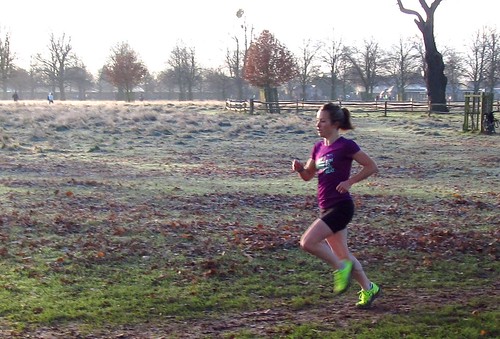 For more info on what age grading percentages mean and how they are calculated, visit the parkrun support FAQ 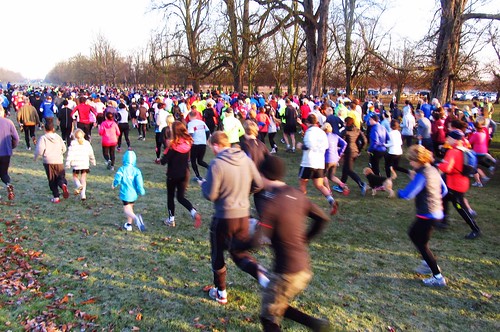 Stats of the day

As per usual there will be a Bushy parkrun on Christmas Day at the regular time of 9am, fancy dress is optional, but is actively encouraged! There will also be a New Year’s Day parkrun at 9am at Bushy, and this is the only day of the year where you can register two parkruns – and as nearby Kingston (10am) and Crane Park (10:30am) have later start times, there is the potential for a parkrun double! If you are away for the festive period, do check out the Christmas Compendium to avoid disappointment!

Next Saturday is pacer day! Odd numbered pacers this time, between 21 and 35 minutes as the fairy godmother pacers are set to return, hoping to sprinkle some magic on your PBs!

I’ll leave you with this excellent photo captured by Suzan Baker of parkrun founder PSH CBE enjoying his morning, spectating at Bushy. Thanks also to Julie Papworth and Sarah Finney for their photos in this report too. 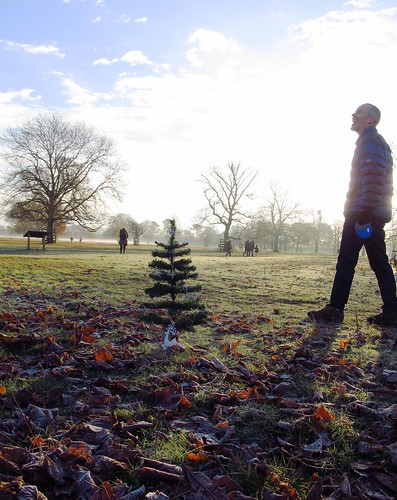 Still want more? . . . then listen to ‘the parkrun show’ podcast – out every Tuesday, with Danny Norman and Nicola Forwood www.facebook.com/theparkrunshow