Blessed are the pacemakers! 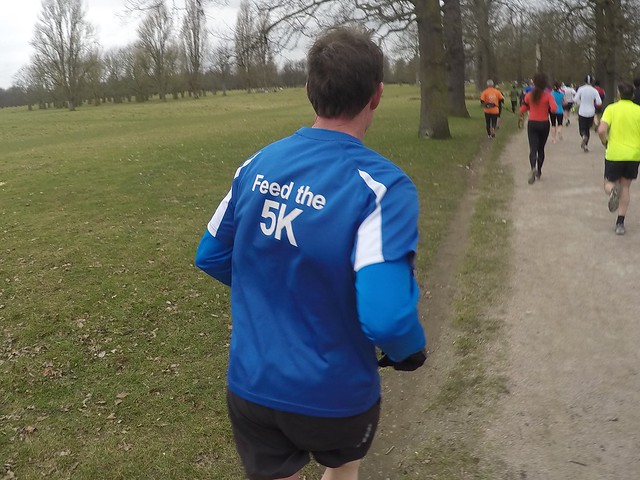 You may well have seen a whole host of runners with terrible/brilliant religious running puns on their t-shirts – that is because this week marked the regular inter-church running mob-match. Basically a bunch of local church communities use Bushy parkrun to have a little competition, nominally see who is has the most or fastest runners, but more importantly meet up, have a run and catch up afterwards. It fits quite nicely with the parkrun ethos!

For them to choose this week, meant one of their t-shirts was most apt! 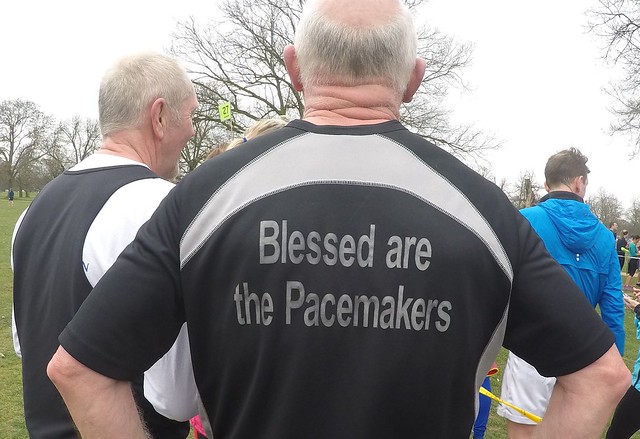 Yes, it was pacers week. It is normally eight, but this week we had nine awesome runners giving up their own runs to run an even pace, carry a flag and generally encourage others to PBs.

It is probably the nicest of roles at parkrun – you get to run around our beautiful course, usually at a pace which doesn’t make it feel like your heart is about to burst and at the end get the satisfaction that comes from having helped the runners around you! And you have burned enough calories to still justify a scone with clotted cream from the Pheasantry! 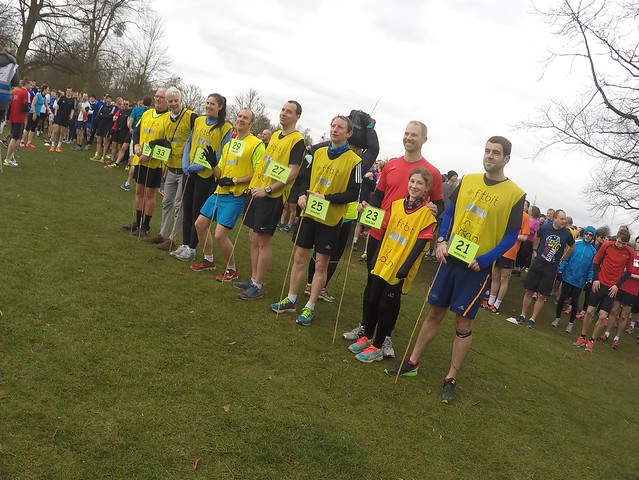 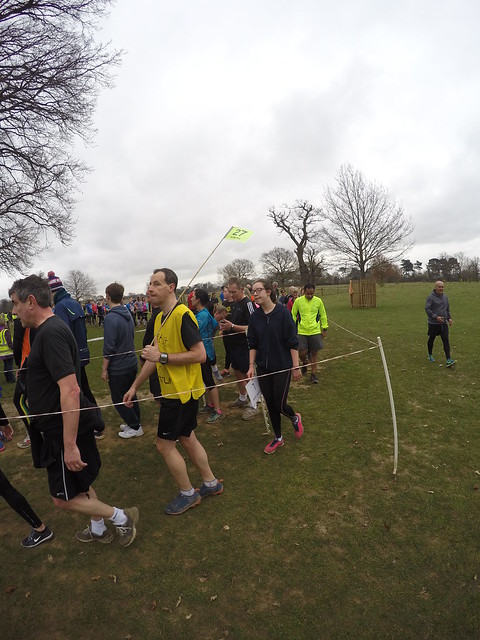 Michael Lonergan finishes his shift with the 27 minute flag

In terms of their impact - a total of 469 runners were deemed to be within their spheres of influence (within 30 seconds either side of target times) and an incredible 17.1% of those runners recorded PBs! Top performers were the fastest of our pacers with Lewis Keywood helping his followers to convert an incredible 24% of their times into PBs, while Estelle and Tim Burden were just behind on 23%. 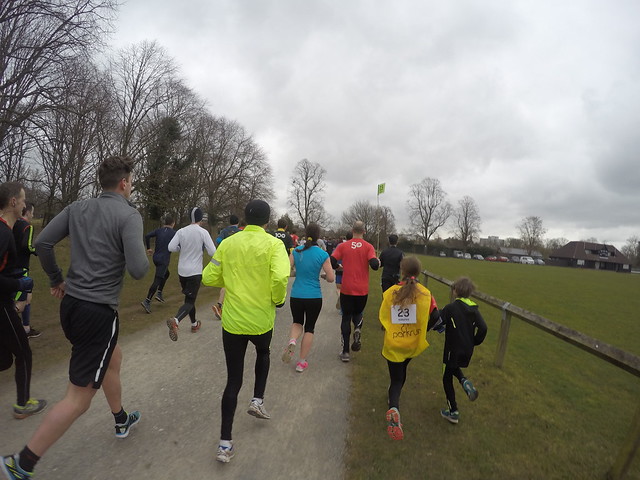 Estelle and dad, Tim, round the cricket pitch! 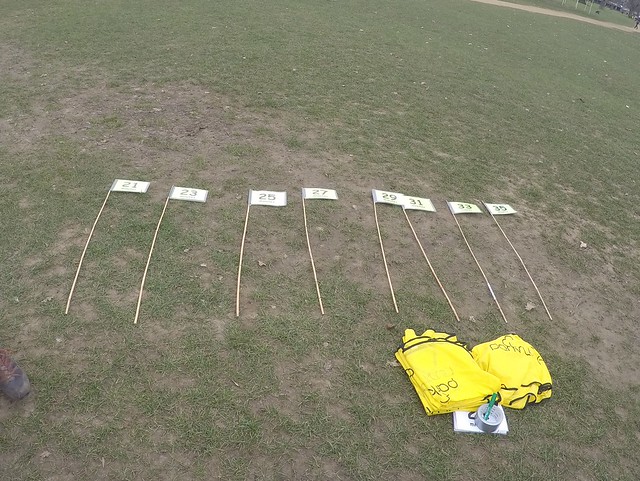 If anyone else fancies a go at carrying the flag – all you need is the ability to run at a reasonably consistent pace and a voice to shout a bit of encouragement - you never know you might get a message like this! 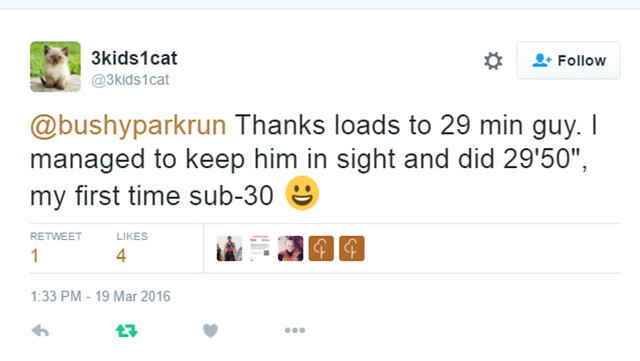 As for the main event, after the fog of last week we had grey skies and a little bit of dampness in the air, but numbers were back and 1,060 of you enjoyed a lap of the park. 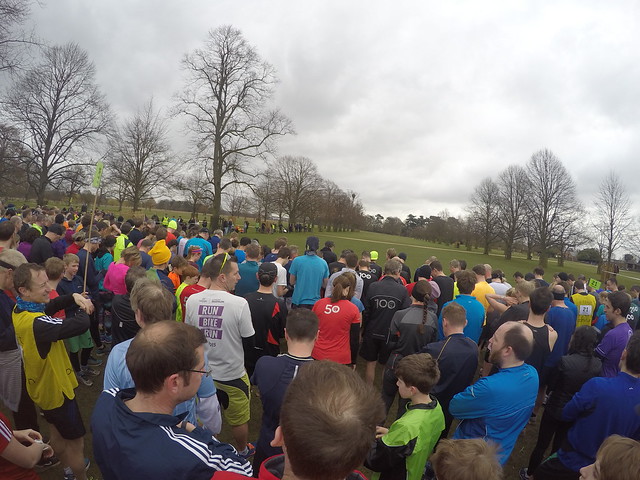 Amongst the ladies in the field, first place went to Michelle Dillon (17:59), with Nancy Scott’s new PB of 19:11 giving her second place ahead of Caroline Pleasance.

In the junior event, Nancy Scott was quickest of the girls, followed by Sacha Kennedy (20:09) and Phoebe Saville (20:55) – who also recorded a PB. 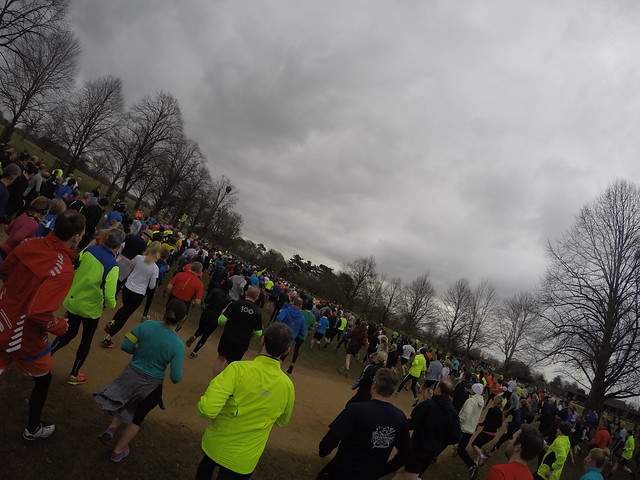 This week, we had pretty good conditions underfoot and eight runners used them to record more than 80% of their WAVA Age Grading. Top of the charts was (as usual) the amazing Jane Davies who recorded a 21:44 which was enough for 97.6% in the VW65-69 age group.

181 runners recorded new PBs this week, this include 40 runners with more than 50 parkruns to their name. Most experienced was Stefan Krueger who has 198 laps of Bushy to his name out of 200 runs overall.

I should also mention Sarah Fraser who also commemorated her 200th run with a new PB, and Bhawna Parmar who did the same on her 50th!

Junior 10 Club – Nancy Scott, Jack Pearce, Christian Grose, Kyle Hancock and Marie Gray will be adding a new white t-shirt to their running kit in the next few days

100 Club – Ashley Freeman, Rachel Glynn, Jonathan Lee and Jill Pegler should be wearing the black top of the 100 club shortly

250 Club – No-one this week, but Allan Kuhar and Kathryn Ager both did their 249th at Bushy.

This week marked the 27th parkrun of the Bushy calendar and so we are officially halfway through the season.

Looking at the various championship, the race for the Sonia O’Sullivan Salver couldn’t be closer.

Can Sacha hold on? – You can only gain volunteer points on three occasions during the year and she has used up two of hers already this year, whilst Polly and Ramona have kept theirs in the bank in case of injuries between now and October!

Sacha has been in great form with a fair few PBs in recent weeks, breaking 20 minutes for the first time and is averaging an amazing 245 points for each run.

Polly is hitting almost the same number of points per run (244) and so it couldn’t be closer – the points difference is simply down to Sacha’s volunteering.

Ramona is having to work a little harder and is down on 214 per run and so challenging due to having done three runs more than the two athletes above her.

It feels like it is between those three for the title. 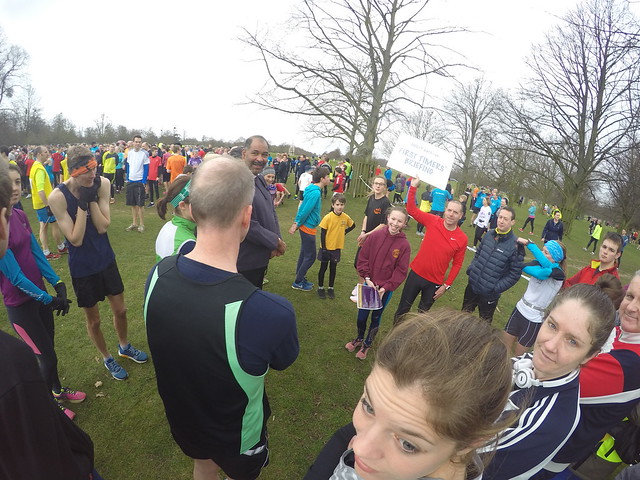 Sacha Kennedy taking the New Runners Briefing this week after telling Hayden he was too serious last time around! 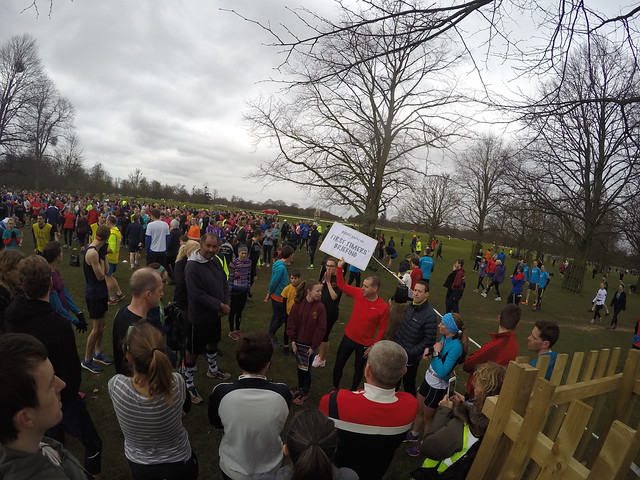 I would guess that Hayden (red top) is holding the sign wrong - or something!

The John Hanscomb Trophy table has a little bit more room at the top.

And amongst the juniors, Dominic Rhodes (3,034) leads Christian Harper (2,716), but there is still a long way to go and Austin Molnar’s dedication in running 24 times compared to Dominic’s 18 could see him move up from third in the second half of the season.

Anyway. Hope you all enjoyed a good run! 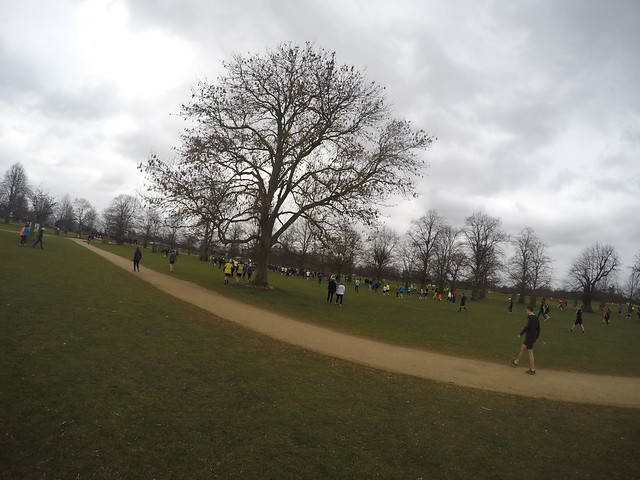