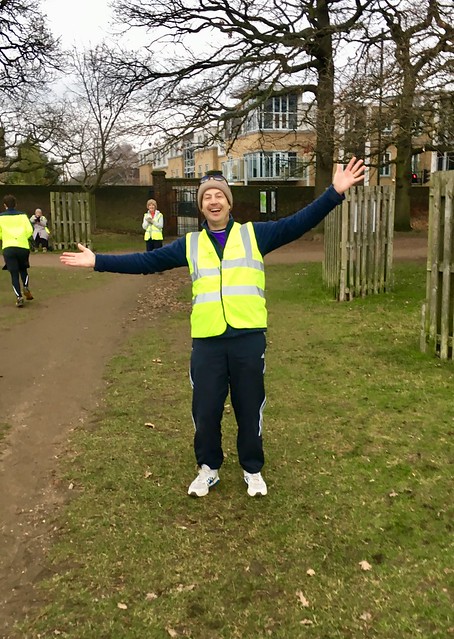 The decorations are back in the under-stairs cupboard and the New Year’s resolutions are pinned to the fridge. Time for parkrun! We had a sizeable number of first timers this week – 129 out of a total of 1,380 runners which was slightly down on last week but still a creditable turn out (8th highest).

With new runners and tourists all briefed on the course and the famous double funnel, we lined up to hear Run Director Simon Lane, stepladder to the fore, give us the low down on Bushy parkrun #717. This week we had runners from across the UK (Pennington Flash & Stormont to name but two) and from overseas, there was a mob match between two local rivals, and plenty of milestones at 100, 50 and 10. 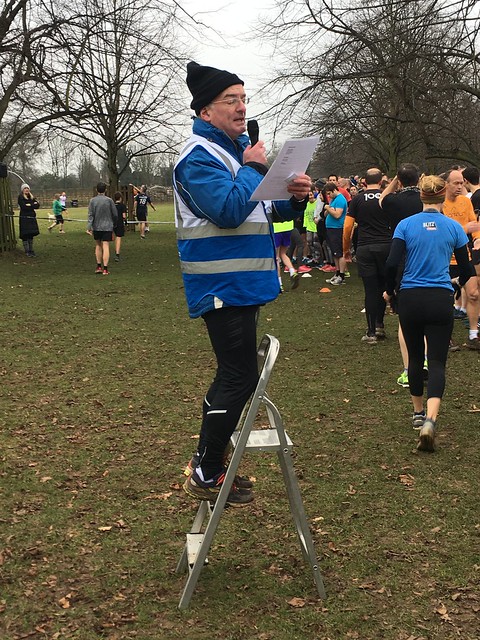 On his second consecutive outing as Lead Safety Bike was Patrick Troughton. Last week the first finisher was less than 16 minutes and Patrick said it was quite an effort to stay ahead which says something about the quality and fitness of some of the runners doing parkrun. I can recall at least one time when the lead bike was caught and overtaken, so if you volunteer for this role make sure your tyres are pumped up and you can do around 3 mins per km. 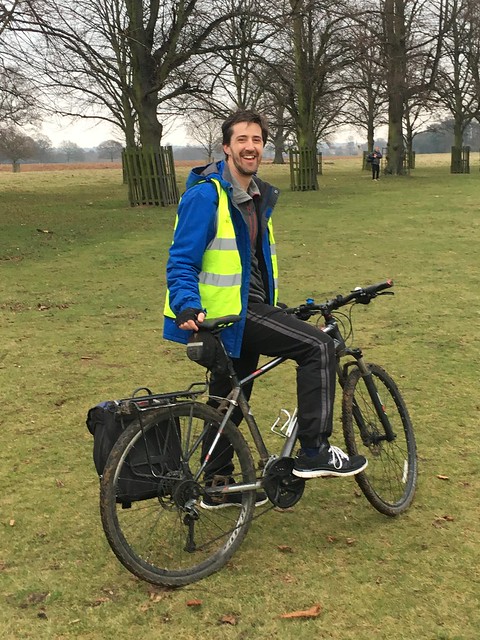 In total there were a fantastic 55 volunteers out in force, making everything possible. Please give your thanks to the following brilliant team:

Bushy parkrun always need volunteers, so if you fancy a go at any of the many and varied roles, just drop an e-mail to Pat McGrath at bushyhelpers@parkrun.com  and he’ll sort you out. 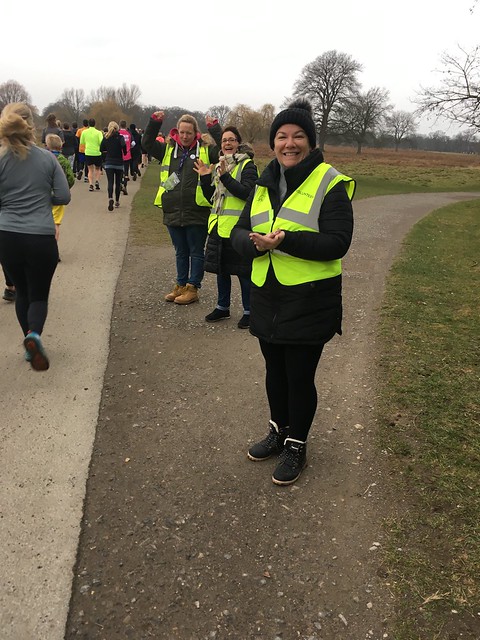 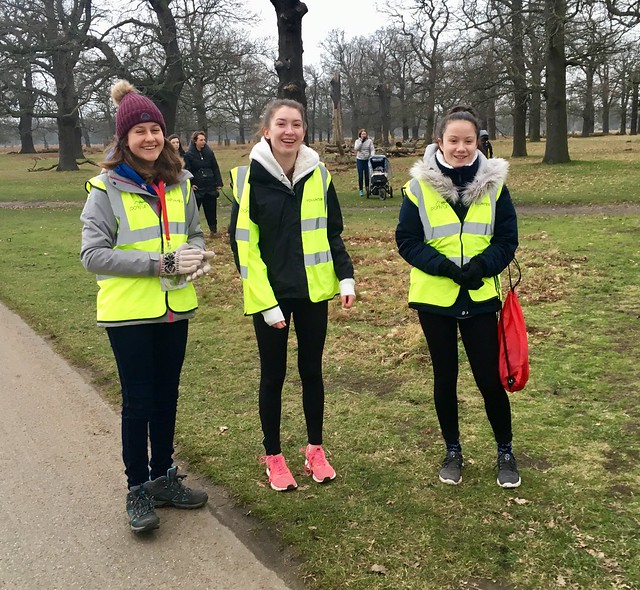 Tourists and other First timers

We had 129 first timers to Bushy this week, and 68 of those were doing their first ever parkrun - over 5% of the field. Prize for the Bushy first timers with the most runs goes to Gareth LLEWELYN and Stuart HAMILTON on 268 and 208 runs respectively. They hale from Pennington Flash parkrun west of Manchester which is 3 laps in the Pennington Flash Country Park, the “Flash” being a small lake formed from coal mining subsidence and now home to a nature reserve and a parkrun!

We also had first timers Robert WHALEN, David ASKER and Dan SMITH from Norwich and St Albans parkruns with 395 runs between them. Welcome to parkrun’s birthplace. 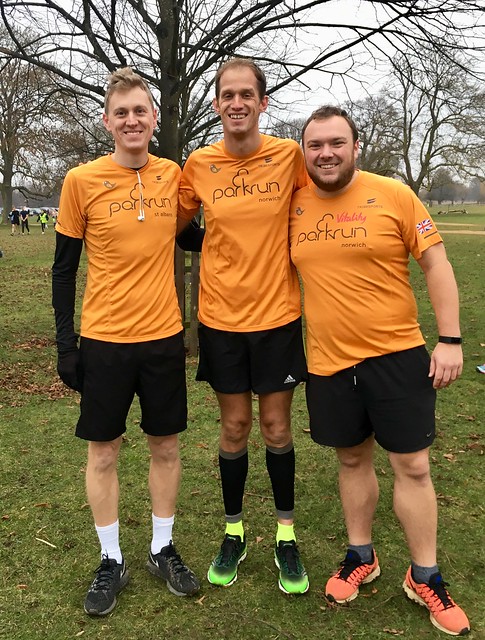 Dan, David and Robert on their first visit to Bushy parkrun

Meanwhile I bumped into Sonia CLUITT (121 runs) just before the start. Sonia is seeking to complete 100 different parkruns by the time she is 60 in June. Normally running at Southampton parkrun, Bushy was No 92 on her list, and next week she will be in Rotherham – these tourists get to some exotic places. 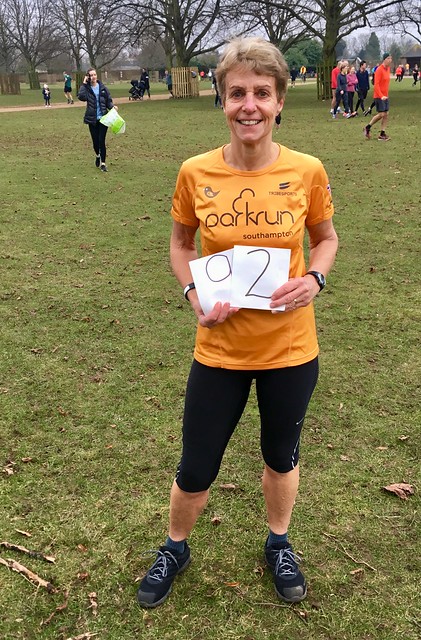 Sonia on her 92nd different parkrun

Bushy welcomed a group of runners from the Peak District called Smiley Paces which is a 250 strong women-only running group based in the Peak District. One of the original 13 parkrun pioneers and a founder of the group, Karen WEIR (195 runs), was hosting them today. Karen explained that a number of the group had managed to get into the London Marathon so they were with us to sample the flat lands of Bushy as part of their training programme. Parkrun founder Paul SINTON-HEWITT was also on hand to welcome the group which includes Lucy MARRIS (148 runs) who is the daughter of the wonderful Elisabeth MARRIS who as Bushy regulars will know, is one of our most dedicated and more elderly marshals usually seated and cheering at the 2.3km mark. Lucy said that parkrun is the highlight of her week and she delights in all the thanks from passing runners. 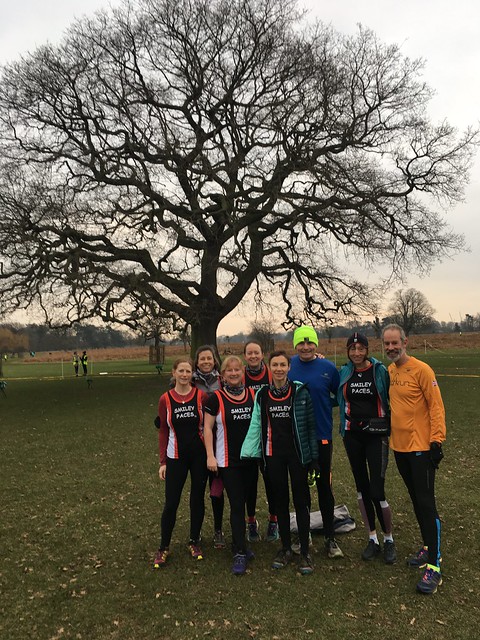 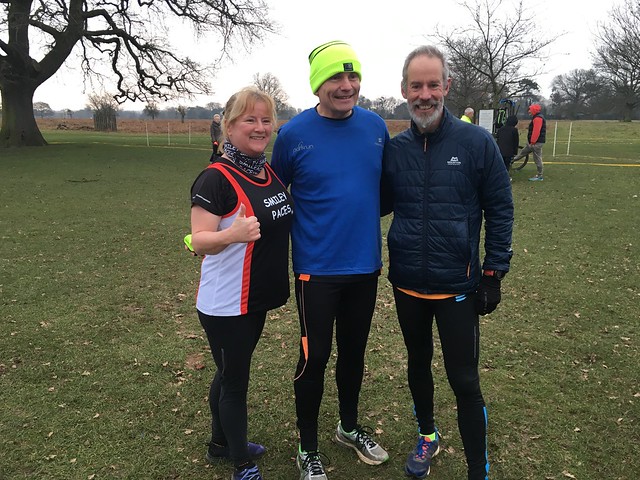 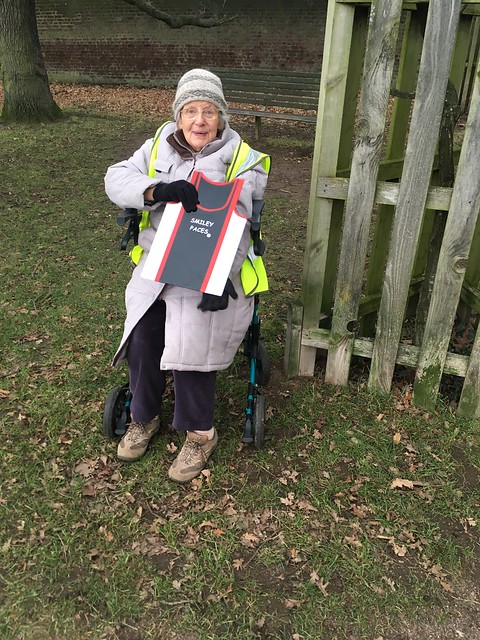 Bushy parkrun #717 hosted one of those informal club mob matches this time between Team Bushy resplendent in pink against local “rivals” SHAEF Shifters so named after the siting of the WWII Supreme HQ Allied Expeditionary Force (SHAEF) in Bushy Park.  The SHAEF Shifters were celebrating their first group parkrun as an official club affiliated to England Athletics. Great set of shirts on show. 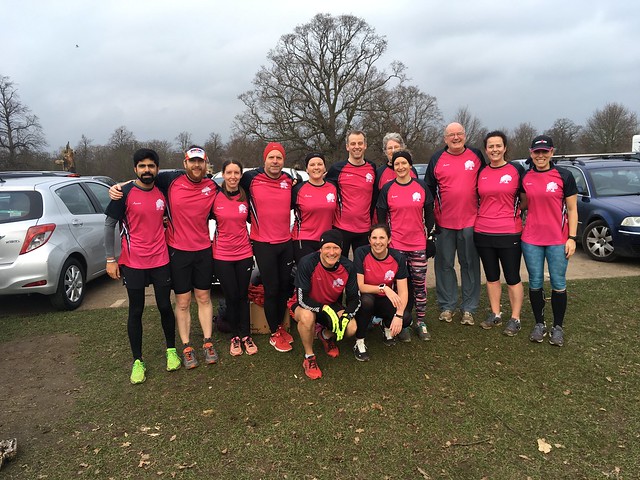 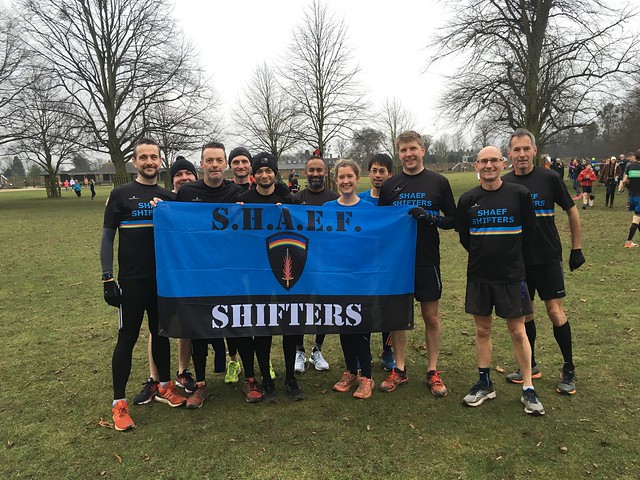 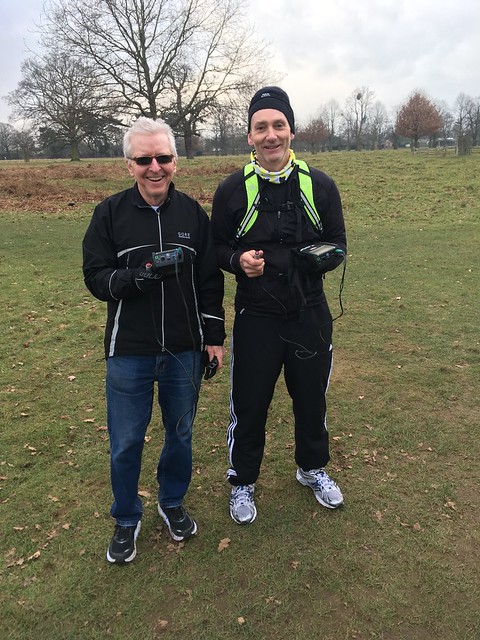 We had quite a few milestones to celebrate this week but no-one reached the magic 500 or 250 runs. Whilst there are two runners from Basingstoke and Black Park parkruns on 497 and others in the 490s, the next Bushy regular up for the legendary blue shirt will be David TYAS on 489 parkruns. Bubbling under the 250 milestone is Debbie BUTLER on 249.

We had 3 people celebrating 100 runs this week. Congratulations to Philippa GODDEN, Gary RYAN and Maria MCMAHON. 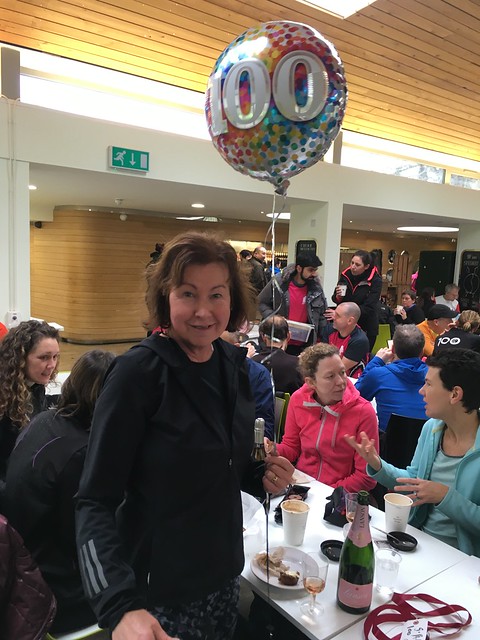 We had 5 runners reach the magic milestone of 50 this week including junior parkrunners James CLIFFORD (JM10) and Harry LANGRIDGE (JM10). Also reaching 50 were: Helen CARRINGTON, Adrian MUNNS and Y BYRNE. Congratulations to all.

Reports on parkrun websites show a big surge in participants this week across the country and overseas. Southampton recorded its highest ever attendance with 1,134 runners. Further afield South Africa saw a massive increase with North Beach (Durban) getting 2,451 runners – a world record. Delta and Rietviei also had over 2,000 finishers. In SA they tend to have a higher proportion of walkers than here which helps boost overall participation and there are other reasons too.

Meanwhile for those who like a bit of a challenge, Bressay parkrun starts this week (20th January). It’s located on the Shetland Isles and you need to get a ferry from Lerwick – it’s not even on the main island (helpfully called Mainland). I like the fact that the finish line is “outside the Speldiburn Café”. Anyway, another one for the bucket list perhaps.

Male placings:
We had some familiar faces on the podium this week. Step forward:

Congratulations too to Graham RUSS (SM30-34) on gaining 4th place on his first visit to Bushy from nearby Nonsuch parkrun.

Stats of the day Bushy parkrun #717

Next week we welcome a group of at least 100 tourists from Tralee parkrun in the County of Kerry, Ireland with a group from Bere Island parkrun, so get ready for lots of green on show. I think the numbers could be up again….

That’s it for now.