A Blustery Bushy: Back to the Beginning 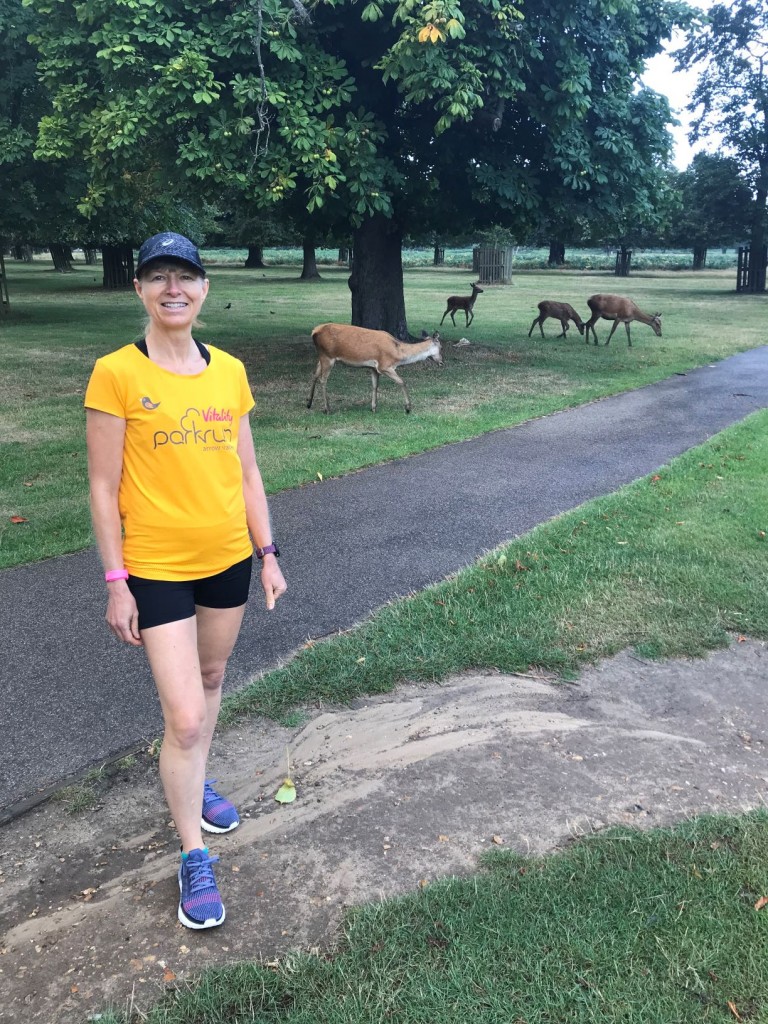 Twelve months ago I was introduced to parkrun in an attempt to spend more time with my parkrun mad brother Andy, visiting from Australia. As most of you will appreciate, Saturdays have never been the same since. Since then I’ve run 34 events, 28 different ones in 3 countries with 18 volunteer roles and have become a complete parkrun challenge geek.

This Saturday''s visit to Bushy, (The Pilgrimage!) I think was particularly memorable for many reasons.
The parkrun bug and it’s amazing philosophy has caught the attention of the family and inspired them to get involved. My London based cousin Rachel, who’d been seriously unwell for a while , decided she’d like to try it. Imagine mine and Andy’s amazement when she announced her 'local' event was Bushy. Photos appeared on our family Facebook page with a certain Paul Sinton-Hewitt in the background and Dame Kelly Holmes there as well chatting to runners - she was just pleased to be there and didn’t understand the significance. She does now.

This Saturday I met my cousin who proudly showed me round her local event, where, over the last few weeks she’s made friends and found a new motivation for keeping well and getting involved in her local community. 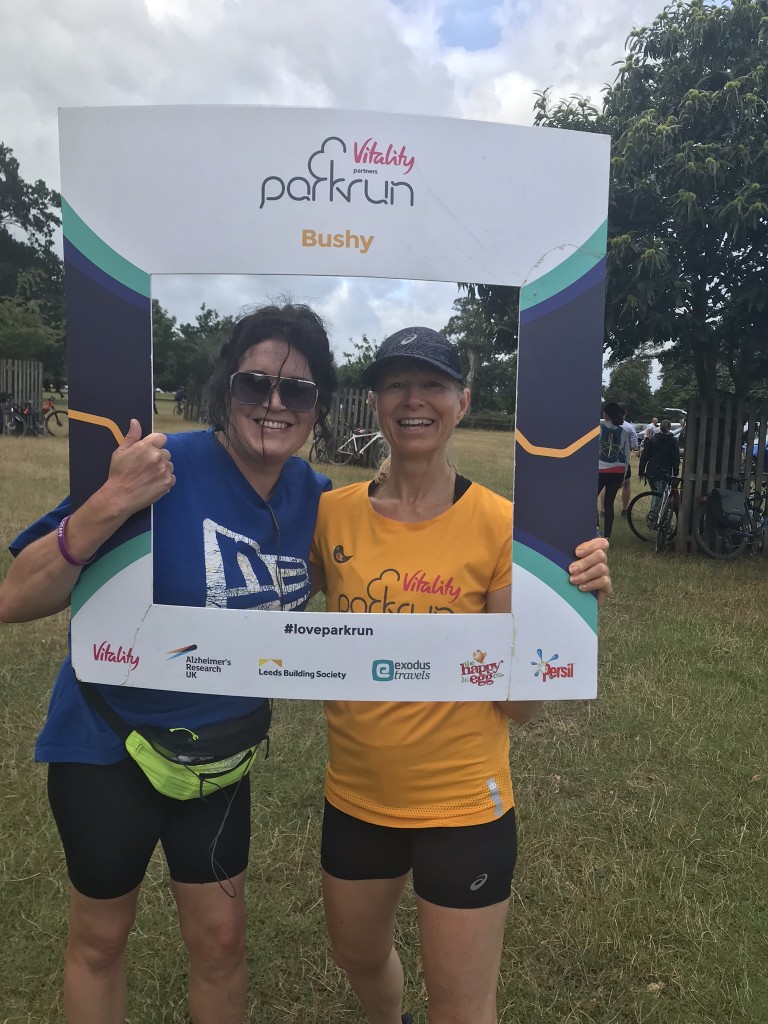 It was a day of challenging weather for the team that’s for sure.
There was plenty of water around and some interesting lumps and bumps at the start across the grass, but the sun came out (made it hot!) and then the gale force headwinds cooled you down, there were even a few spots of rain! Some fantastic marshalling made the run feel well supported too.

Afterwards I helped with token sorting. Una was doing a fab job, supported by Anand and Felix. The winds however were not helping and the moment the tokens starting flying off the table and across the field caused a brief panic for all, I can’t believe none were lost, mostly due to the perseverance of Anand and Felix chasing them across the grass. 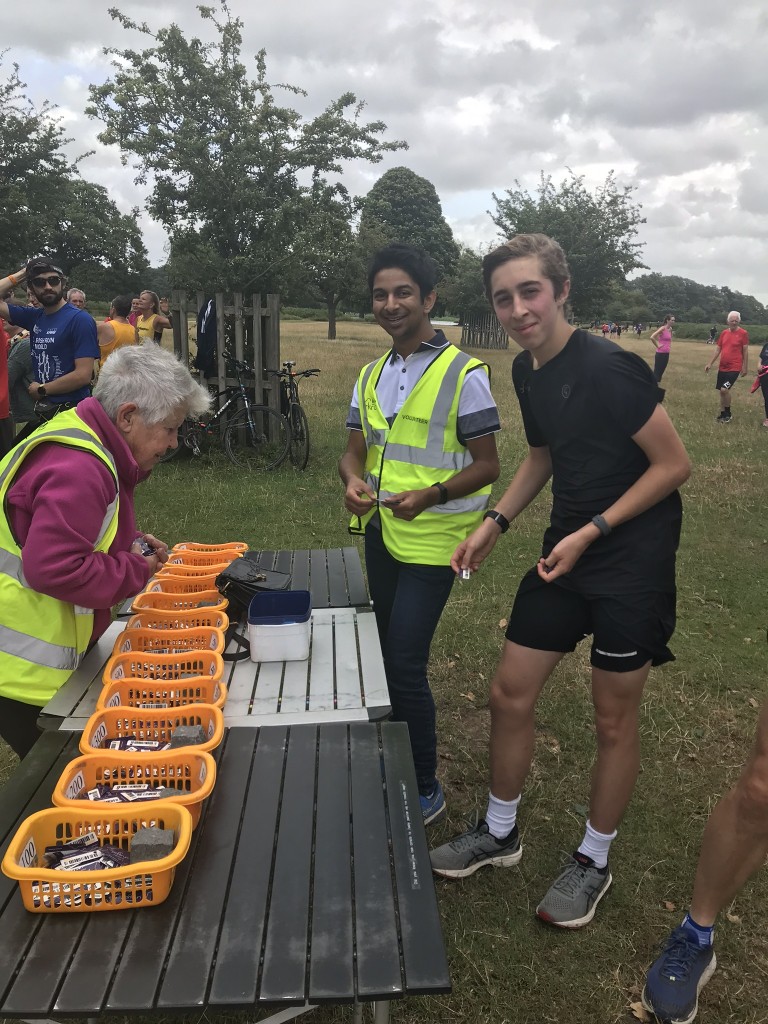 Other wind related incidents were kept to a minimum I think although Rachel had a conker fall on her head while in the funnel.

Of course we enjoyed coffee at The Pheasantry where there was a lovely atmosphere and then walked over to Hampton Court Palace for some more tourism and lunch.

This weeks parkrun ticked all the boxes for me regarding what parkrun is about;
• Time with family in a lovely location
• Community spirit
• A great run/walk/volunteer
• Post run coffee and a catch up

And taking it all back to the (parkrun) beginning gives all that extra significance for me this week.

Kevin Quinn takes up the story:

So, despite the near-collapse of the National Grid on Friday, on we go towards 900 prs at Bushy Park. I imagine the world will end on a Friday and Ray will still have the funnel ready for us the following day.

It was a strange morning for August with rain, streaks of sunlight and a persistent wind. After last week’s landmark celebration the numbers were back to around 1200 of which 209 were BP first timers.

Just 3 runners managed to defy the wind and make it over the 80% WFA mark – well done.

Pics from the park 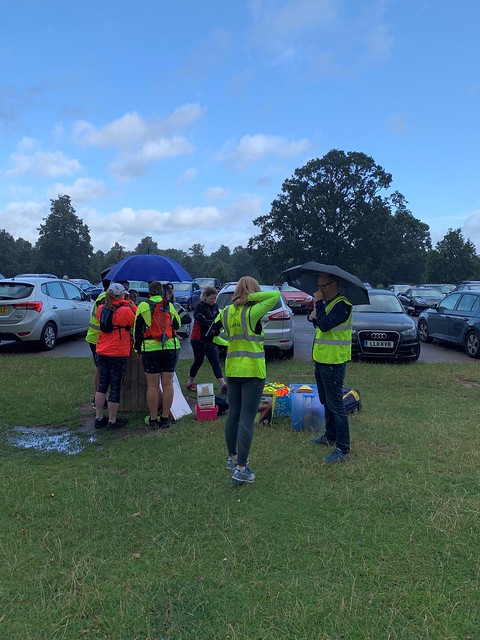 Come on, summer, make an effort. The vols get together under wet, blue skies. 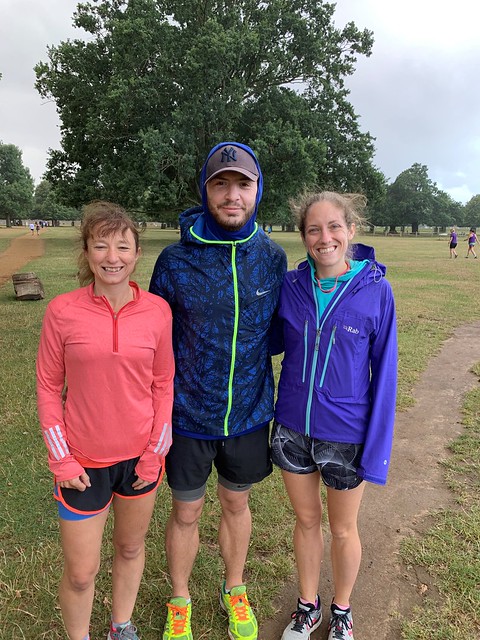 Caroline, Nicola and Ollie were up from Tunbridge Wells 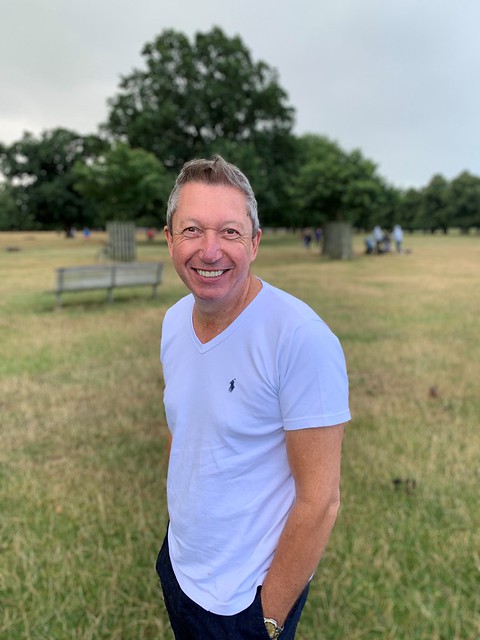 John came over from Chiswick 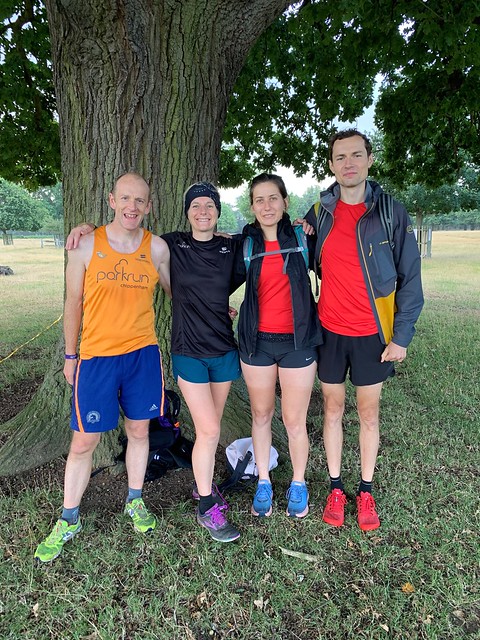 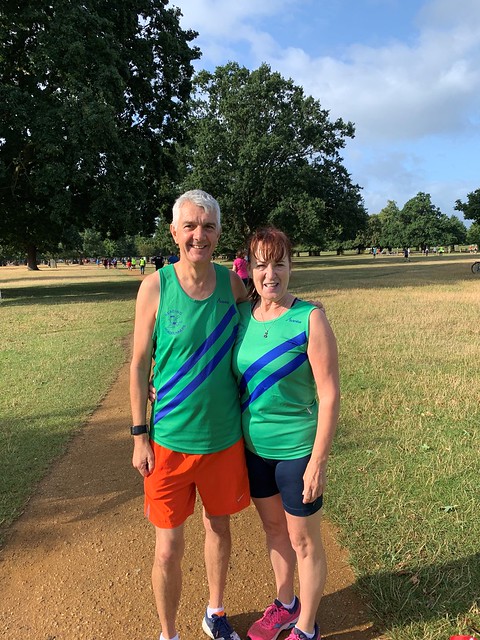 Brian and Sandy were over from Reading 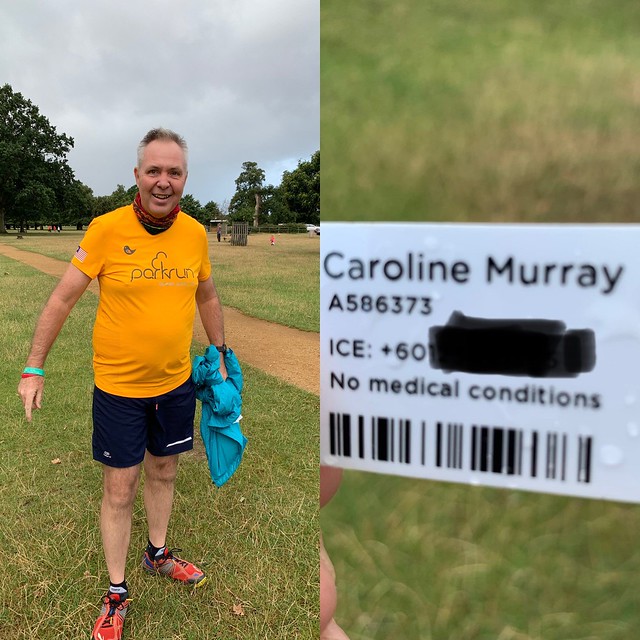 Colin was over from Malaysia where he is a run director. Having travelled all that way his wife, Caroline lost her barcode half an hour before the start while snapping the deer.
But a parkrun barcode is a hard thing to lose forever and it turned up in time. 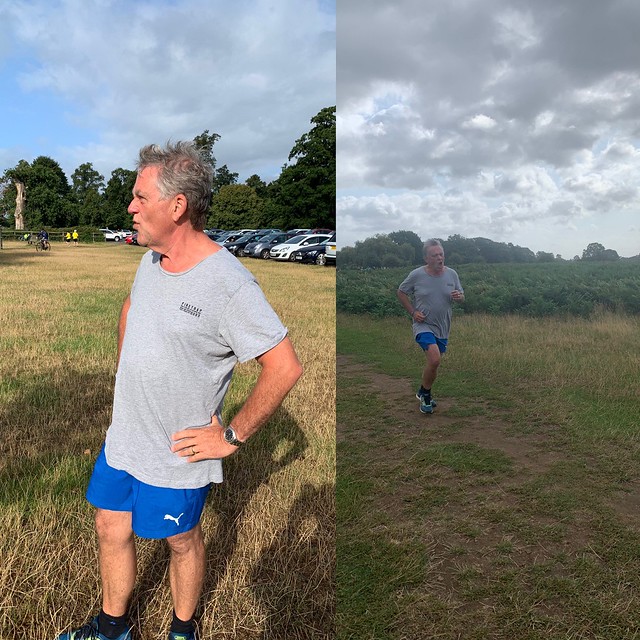 Tim was up from Ilfracombe and I met him as he looked for the start and again as he was looking for the finish. Good work, Tim! 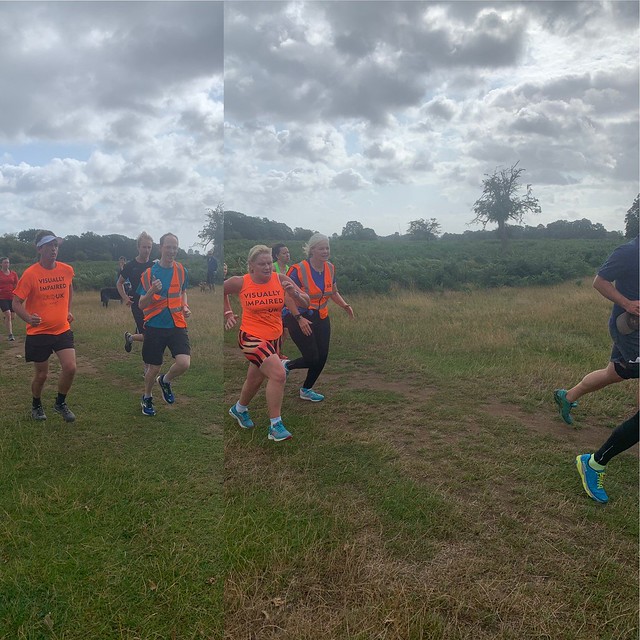 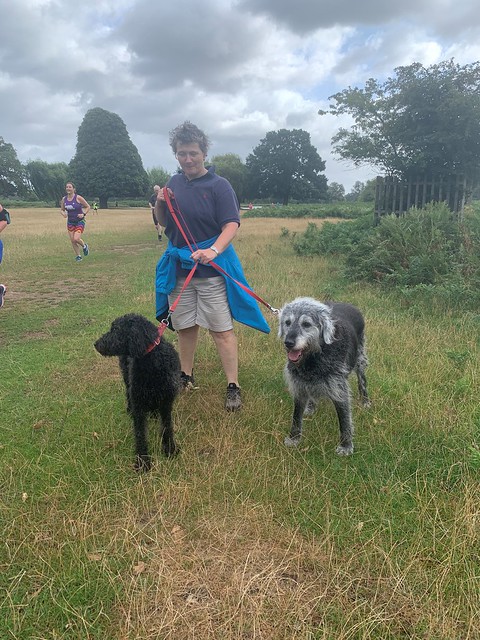 Sarah ran round with the two most handsome runners on Saturday: Ripley and Big Bert 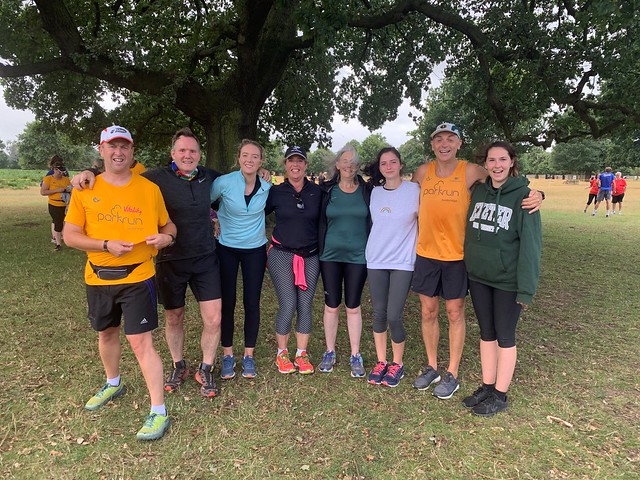 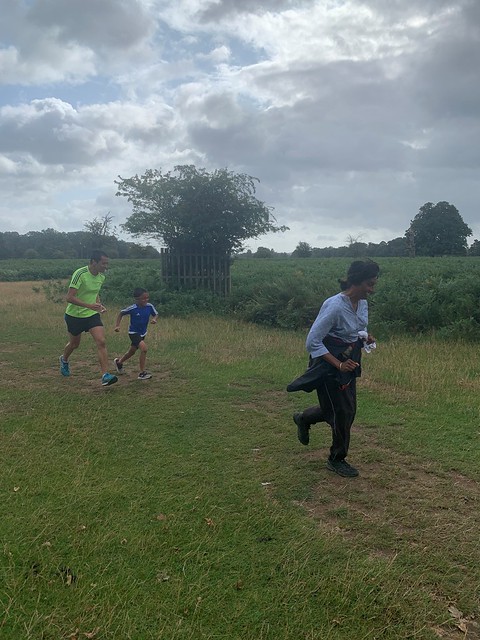 The finish in sight 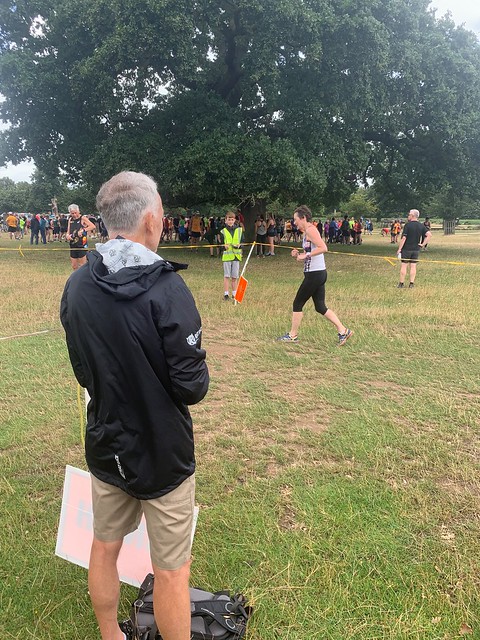 Time waits for no-one but the timers wait for everyone 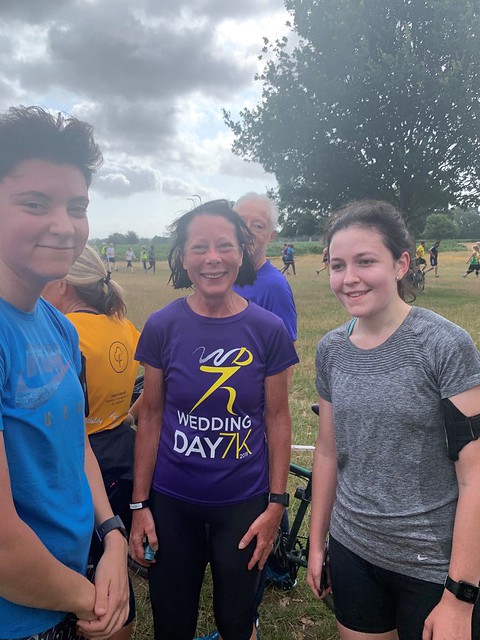 Helen, Amanda, Natalie in the funnel 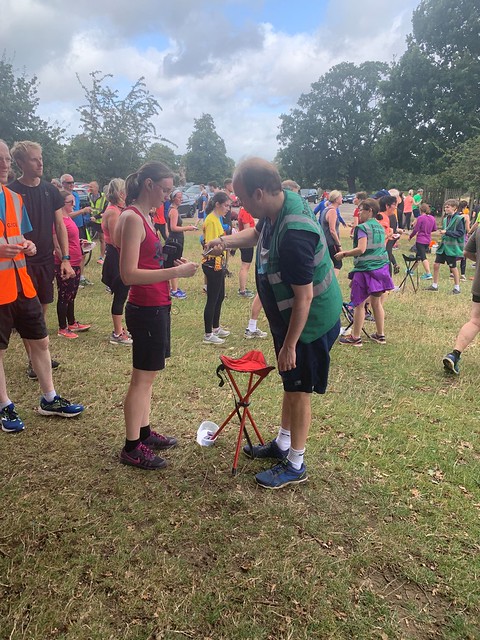 All go at the scanners

For the men, the first three back to the big tree were:

For the women, the top three was

Due to the windy conditions I imagine, only three people managed to break the elusive 80% age grading barrier, so big congratulations to:

And huge congratulations to the following who joined the various milestone clubs:

And last, but not least, joining the junior 10 club 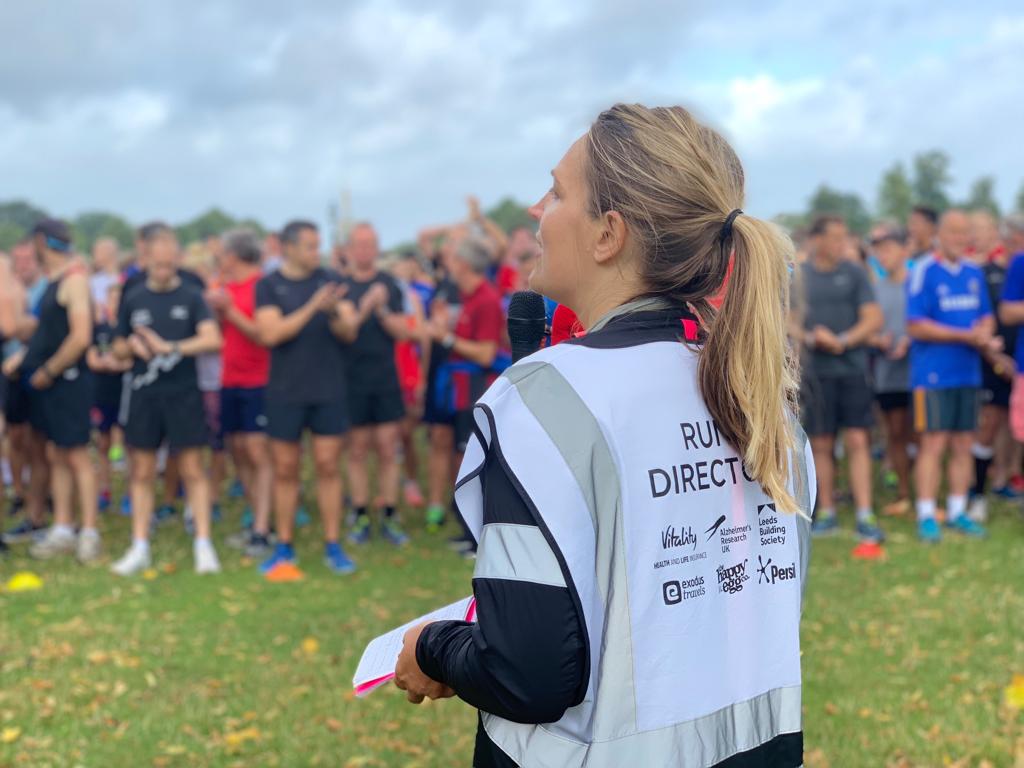 That's it for this week, see you next Saturday at 9am!