Can you hear me at the back?? 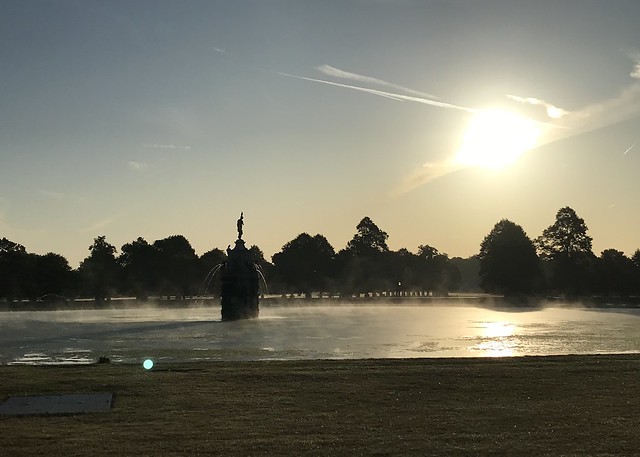 A cool misty morning gave way to a glorious one for the 1,386 of us who completed Bushy parkrun #806 this fine September day. With so many runners gathered on the start, spread in a long line across the course, the core team decided more powerful speakers were needed for the RD’s briefing. What a fine piece of kit they are, standing some 6ft tall. You really have to shout now to talk over them. 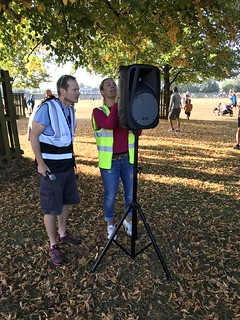 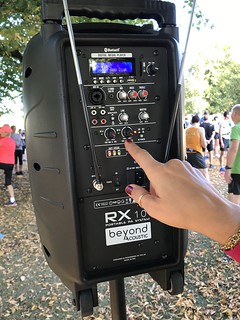 Rob & Lucy get to grips with the new speaker. “It's that button there!” 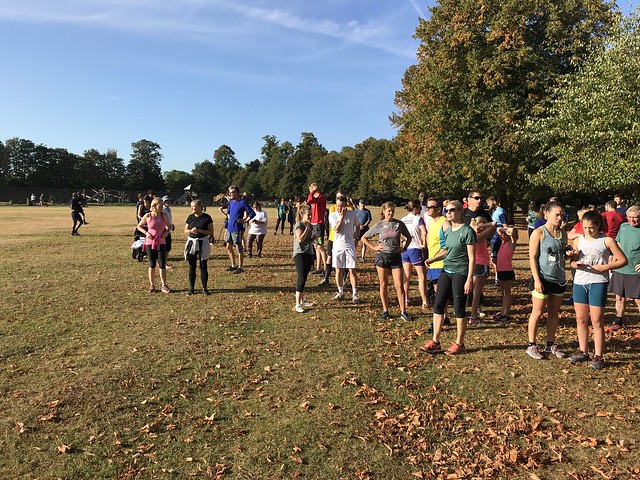 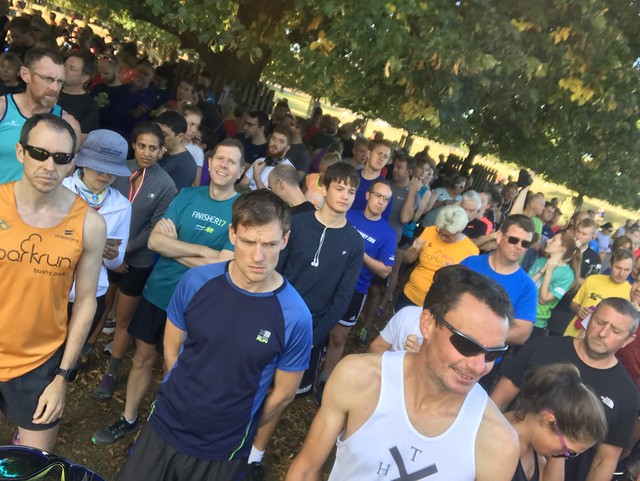 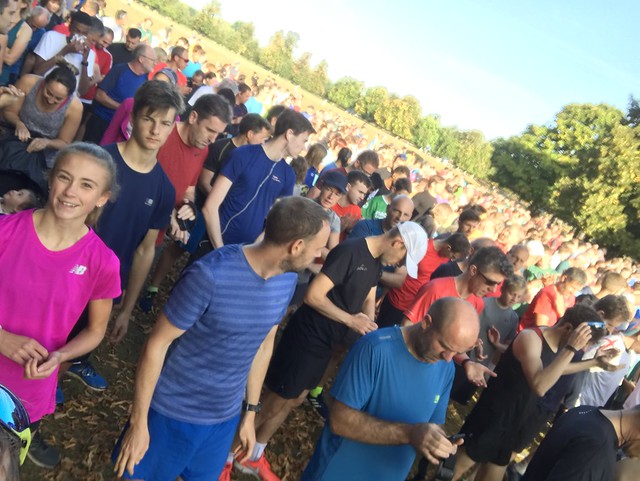 The old speakers have gone to good use with one being used for the First Timer’s Briefing this week led by David Papworth. Listening in I could hear we had visitors from Australia, Gloucester and Grimsby amongst other places. 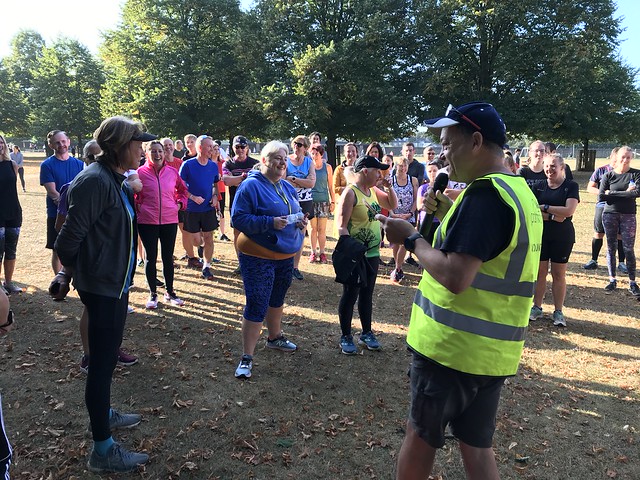 Supporting us all in our run we had a fabulous 56 volunteers, including the invaluable contribution of a number of Duke of Edinburgh volunteers who help every week. I wonder how many of the Royal Family have done parkrun – answers on a postcard pls.
We had 180 people doing Bushy for the first time with 62 of those doing their first ever parkrun. 36 people were doing their 2nd parkrun – well done for coming back! We had a host of milestones including two 250s, four 100s and three 50s.

We had two people called Marshall running this week - Sarah Louise and Gary. We also had plenty of other marshals. 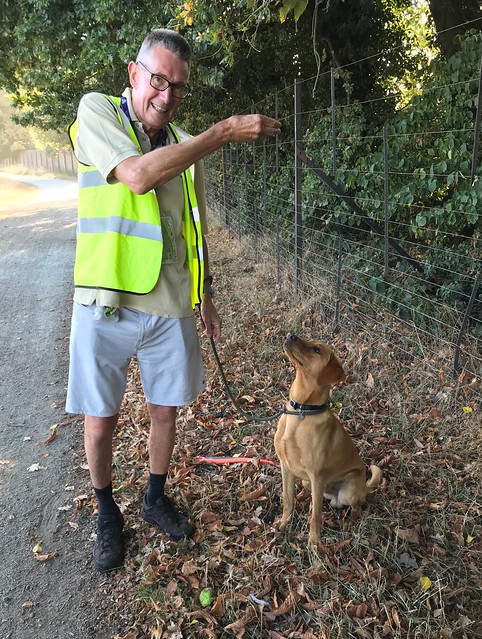 Nick and Sanka at Kingston Gate 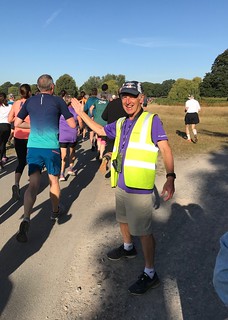 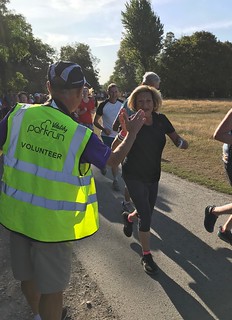 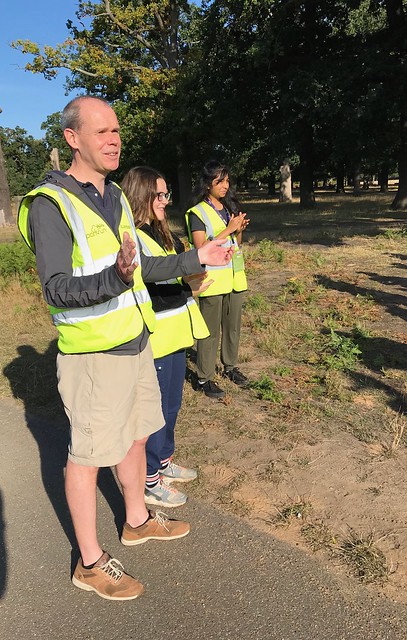 The kissing point at 2km 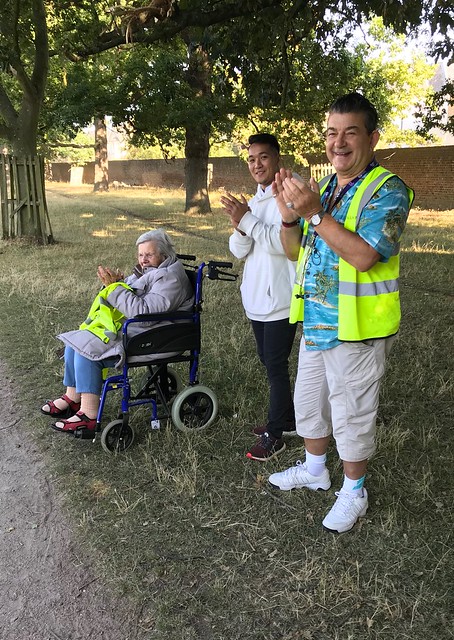 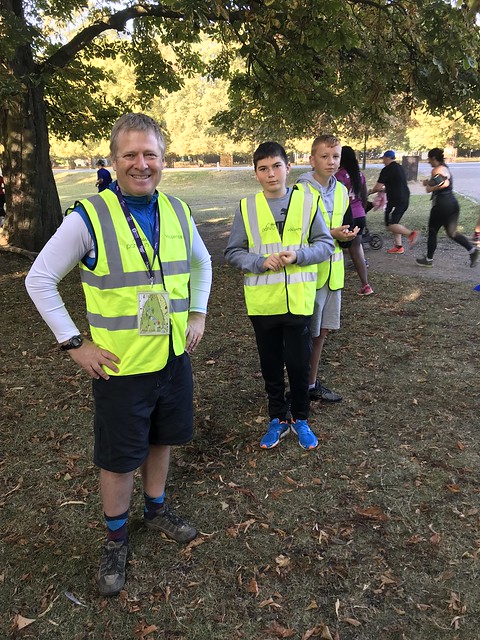 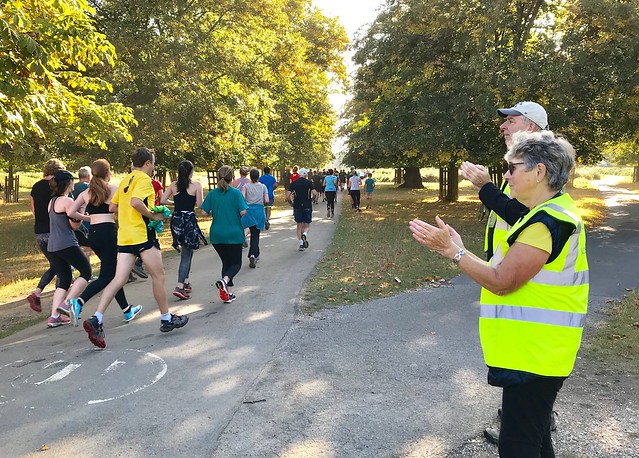 Carolyn and Rory on Chestnut Avenue. 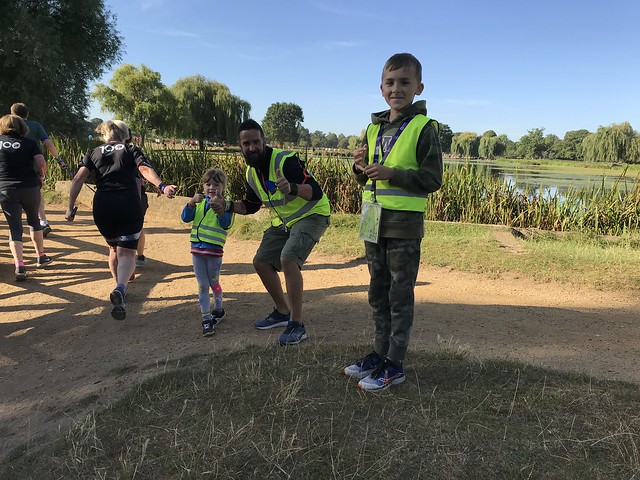 Take it to the bridge – Stuart, Sam & Eva with more high fives

We had a total of 56 volunteers out in force this week, making everything possible. Many thanks to:

Bushy parkrun always needs volunteers and it’s a great way to give something back. If you fancy it, just drop an e-mail to Pat McGrath at bushyhelpers@parkrun.com and he’ll put you on the list for that week. 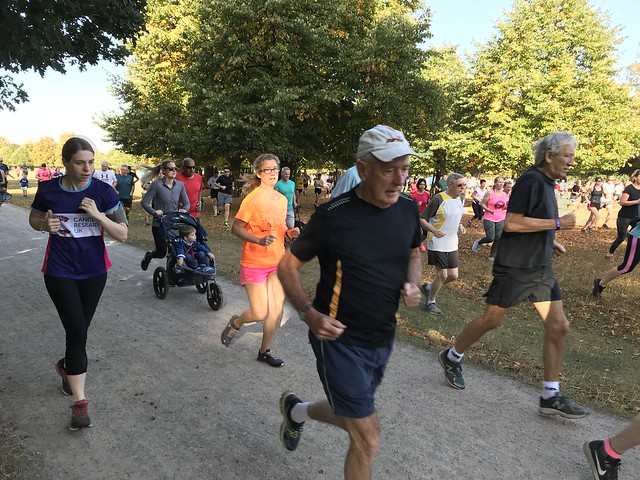 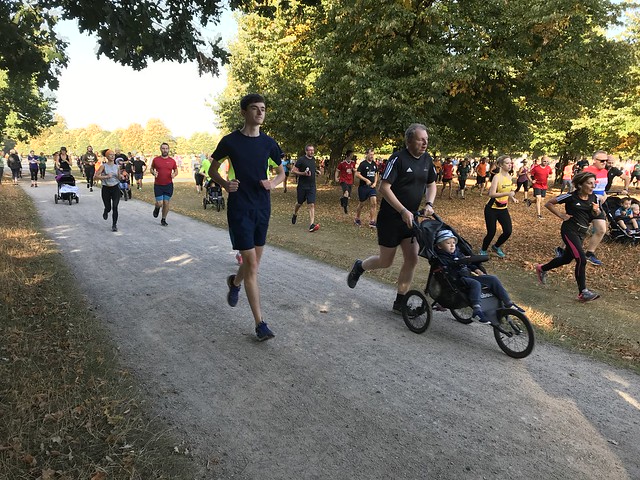 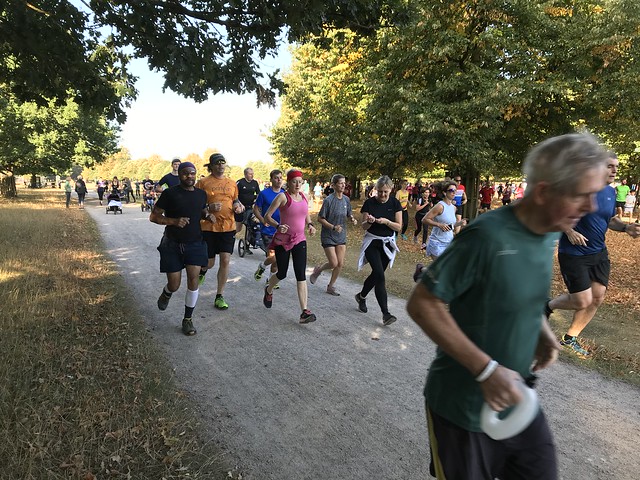 Tourists and other First timers

We had 180 first timers this week of whom 62 were doing their first ever parkrun which is another great addition to the parkrun community. 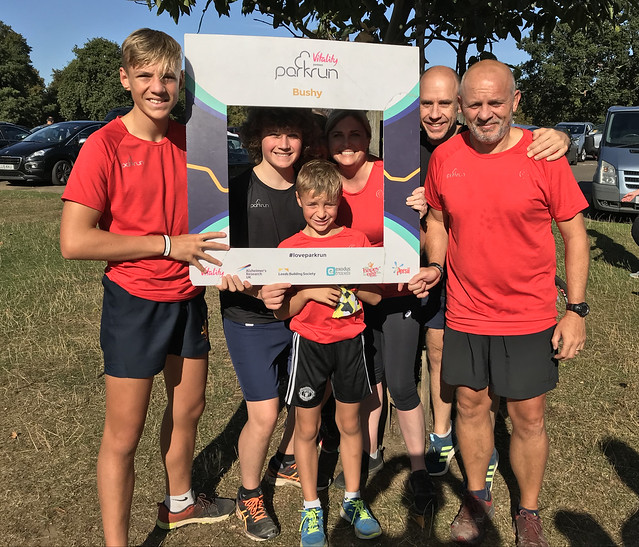 Karl was with his family and friends visiting from Gloucester 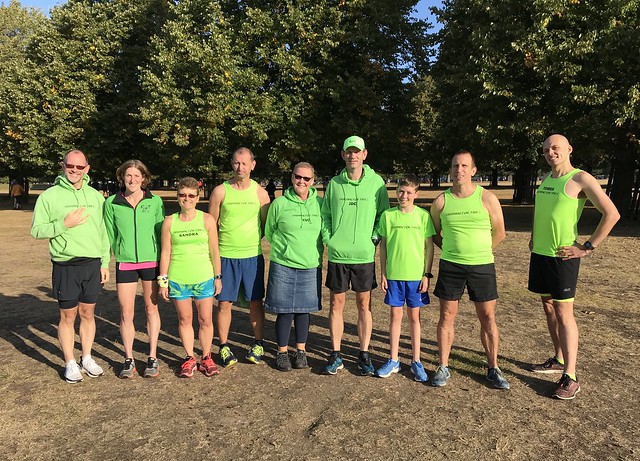 These guys are members of “Running for Time” a club based in Yeovil, some returning, some on their first visit to Bushy 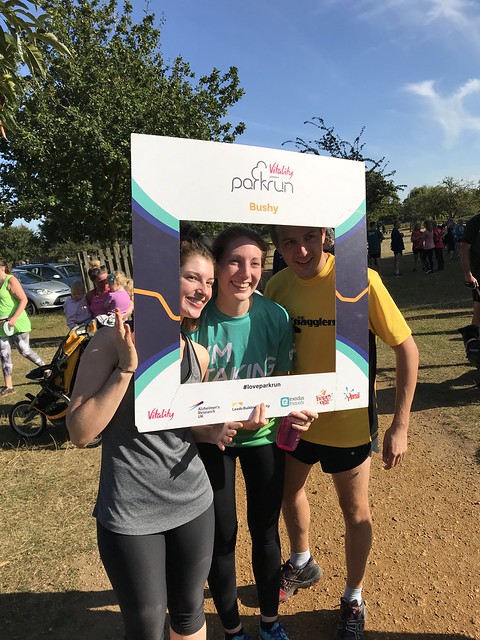 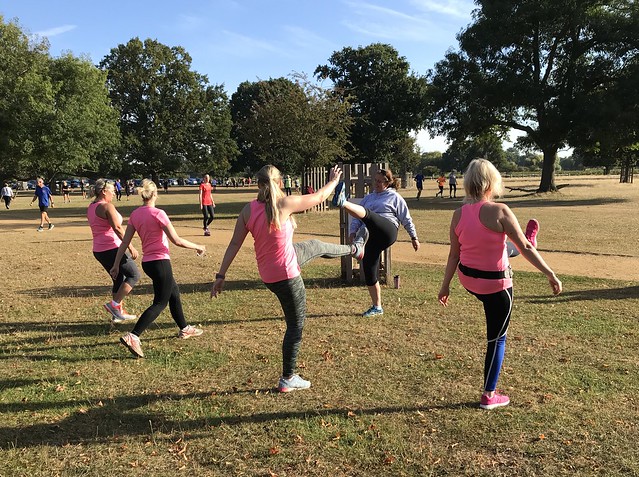 Riverside rebels get in the mood for Strictly

We had our usual crop of wonderful pooches this week, with some assisting their owners and others not being quite so helpful.
First Dog this week was Goldie in a time of 21:21 – obviously falling into the former category with her assistant, Aaron Israel trailing in her wake. 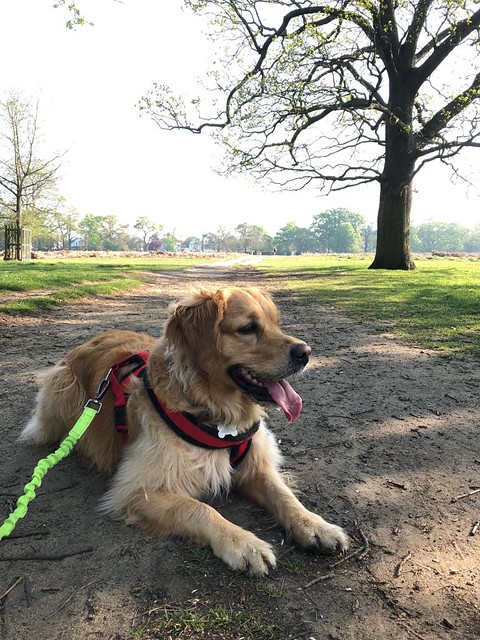 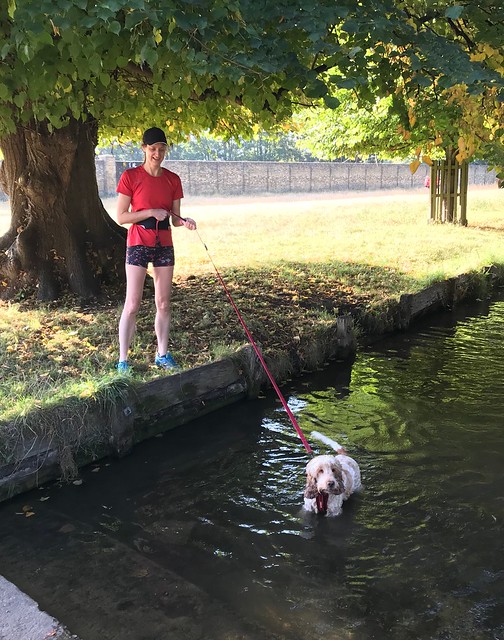 Jade takes a dip (cool down??) before her run 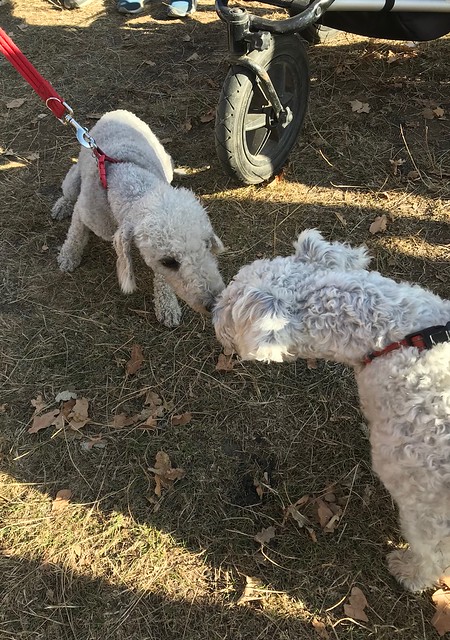 Love in the funnel – Delilah & Rocky check each other out 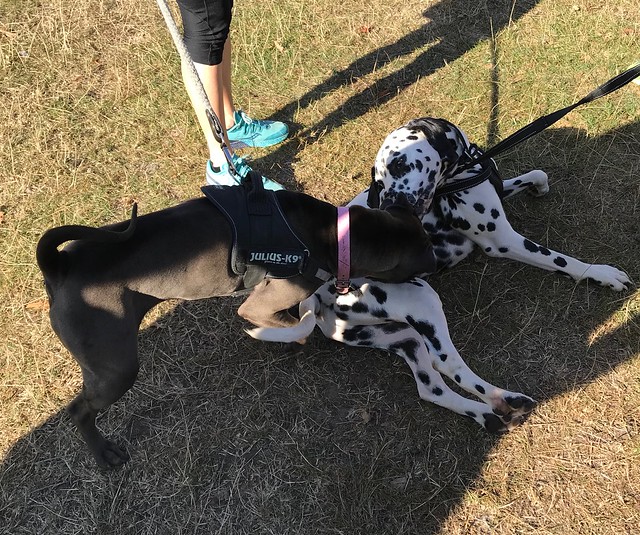 We had 21 amazing people who achieved 80% age grading or more. Well done to:

50 Club
Three runners reached the milestone of 50 this week. Well done to:

250 club
Just two runners reached the magical 250 milestone this week – congratulations to Andy FAIRBURN and Denys LYONS. Andy started his parkrun journey on 12 January 2013 and has run 245 times at Bushy, only venturing to Kingston 3 times and Sheringham twice.
Denys meanwhile did his first way back on 25 March 2006 in Bushy parkrun #80. Denys has also done 245 runs at Bushy with 4 runs at Crane Park and 1 at Richmond.

Cowell club
Latest entrant to the so-called “Cowell Club”, which is doing 100 different parkruns is Bushy regular Jason NOURSE, Jason has run at Bushy 214 times and has 320 runs under his belt. Not sure what challenge Jason will now set himself (see parkrun challenges at https://running-challenges.co.uk/) but I hear stopwatch bingo still awaits… 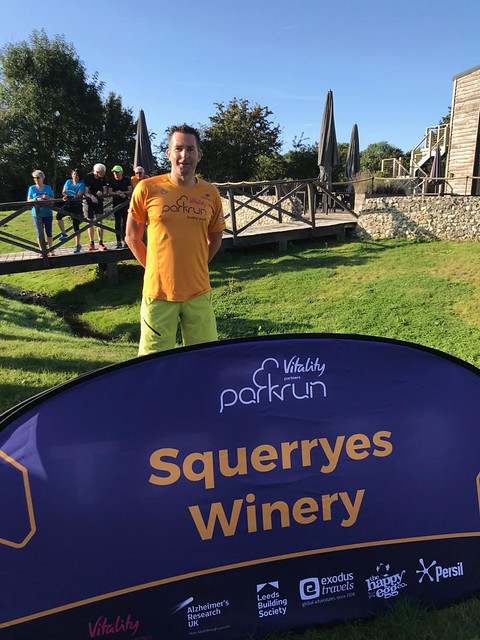 Jason at Squerryes Winery parkrun in Kent this week

Stats of the day Bushy parkrun #806 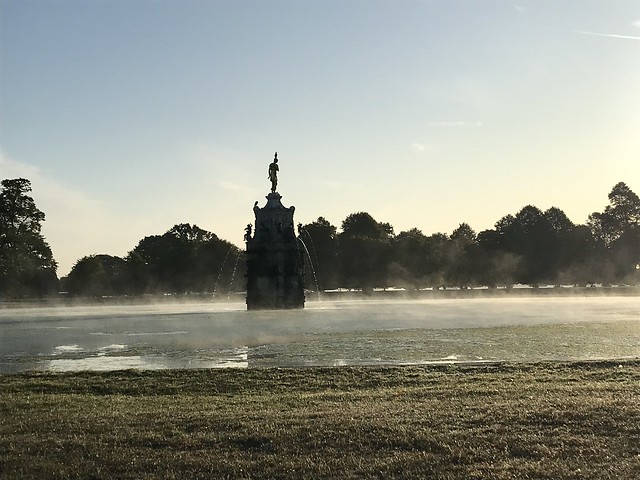 And finally, can I just thank the very kind person that found my bank card and handed it to the Run Director Rob. I was panicking at the start having lost it when using my phone to take photos, but perhaps I should not have worried, as if you are going to drop your bank card perhaps the parkrun community is the best place to do it.