The world record one

Christmas Day at Bushy parkrun is always special: a sea of Santa hats, various elves, reindeer, snowmen and women, and other assorted mythical creatures, plus mulled wine, prosecco and mince pies at the end. This one also set a couple of parkrun world records. Christmas day 2018 saw our previous Bushy record of 2011 people on the course plus 52 volunteers. This year we had 2,545 runners and walkers, successfully corralled by 50 volunteers. An expert team led by Ray COWARD, surely the most experienced run director on the parkrun planet, got us all home in 62 minutes. This called for an impromptu decision by veteran funnel managing director Ray FRANKS to create a third funnel, in another parkrun record for the longest funnel yet, at 238m.

The huge crowd was good-natured as always, even when bunching in front of the cricket field after the left turn meant lots of us skidding to a halt and then walking for a few strides before resuming an elegant trot. Some time later at the business end, there were so many speedy runners gathered round the finish to welcome their slower mates that they formed a sort of guard of honour, which I’d vote to be a regular feature. I felt like a hero finishing around the 33 minute mark.

Bushy is always in need of volunteers. If you fancy it, just drop an e-mail to Pat McGRATH at bushyhelpers@parkrun.com and he’ll put you on the list for that week.

Sighting a 500 club t shirt isn’t so unusual at Bushy, but there were 24 members of the 500 Club out there today. On their 250th parkrun were Jamie MILLBANK, Oliver EDWARDS and Steve DOBSON. Steve was running with his son Harry who was marking his 100th parkrun, as were David STEPHENS, Kevin JONES, Francesca DELL’ANNO, Susan OLSEN and Keith RHODES. Cameron CHISHOLM and Tarun SINGH ran their 50th. Six juniors were running their 10th: Ollie MASON, Rohan LATHIA-HAMBLIN, Jonathon BALMER, Finlay HOUGHTON, Eve TYLER and Harry PAGE.

Unofficial but still major milestones for Grant RUSSELL and Sarah E J MAYALL running their 400th, and for Sharon CRICHTON and Harriet DUNSTAN notching up 300. Well done all.

Impressive to run a PB in these conditions. Perhaps it’s less muddy if you’re not following 1000+ others. Must try that.

Two unknown runners were next (no barcode or publicity-shy?) so the next two are

On a typical Saturday at Bushy parkrun there are around 12 people scoring 80% or more. No change this time, despite the huge field. 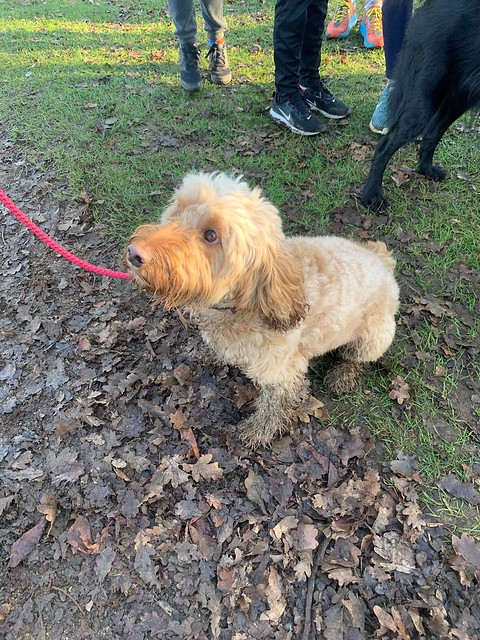 And here’s Digby the cockerpoo, who was separated from his owner Johnny. Other parkrunners handed Digby in to the Run Director of course, and Johnny handed himself in, so dog and human were soon reunited. Keep him on a shorter lead in future, Digby! 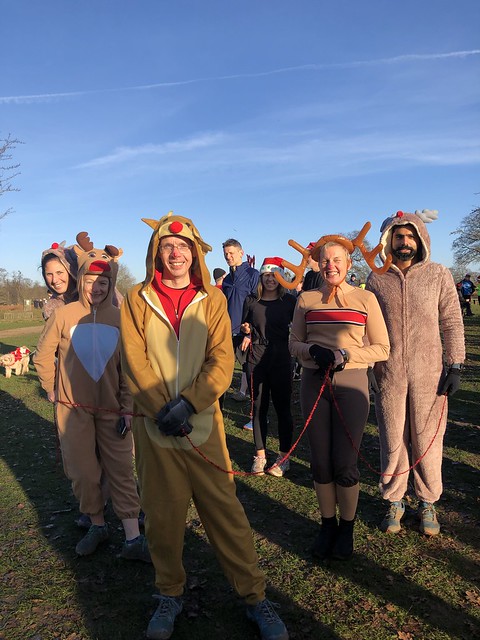 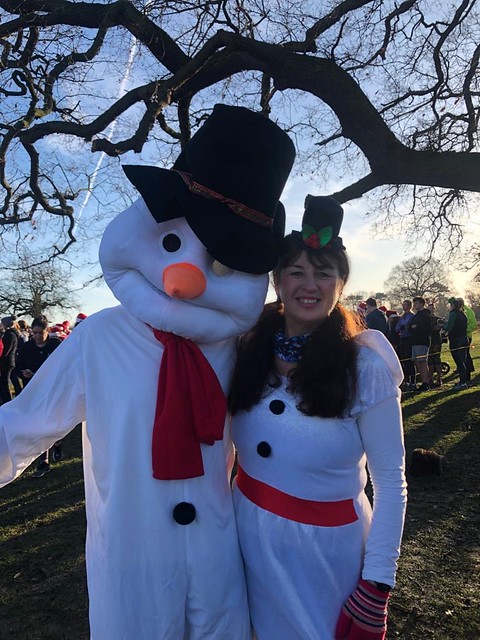 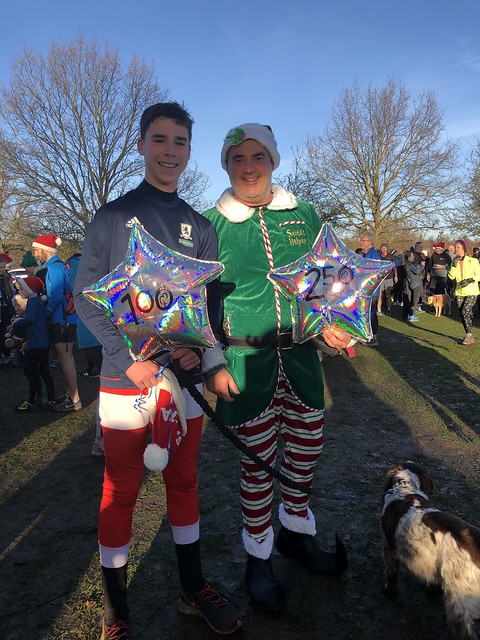 Harry and Steve, celebrating their 100th and 250th runs 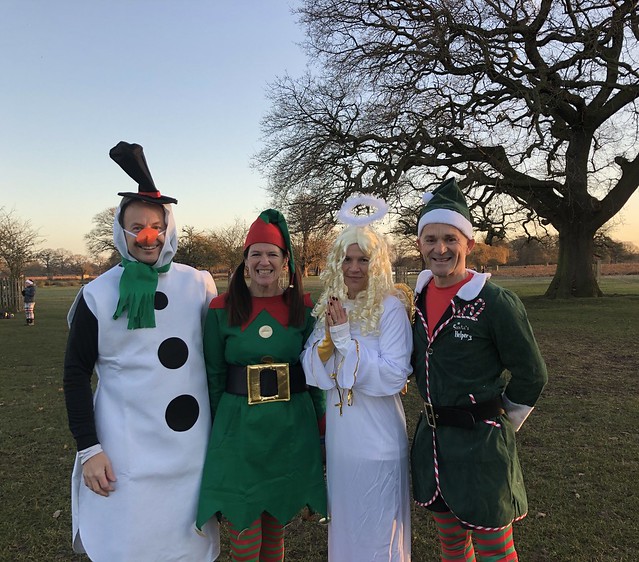 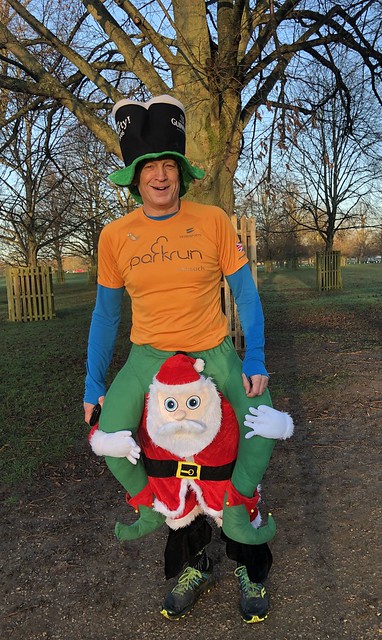 Paul, whose home run is Nonsuch 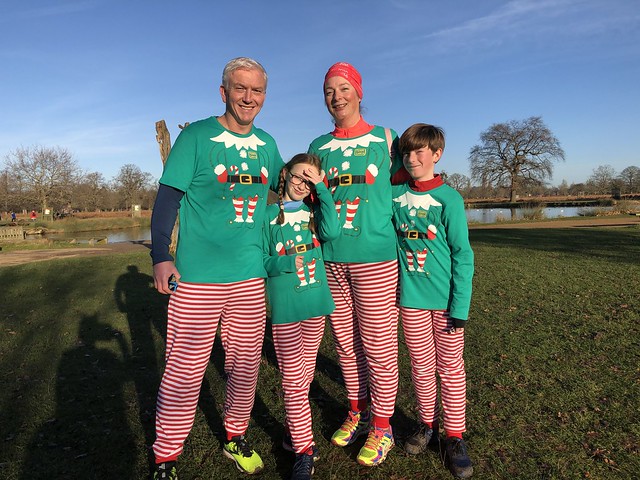 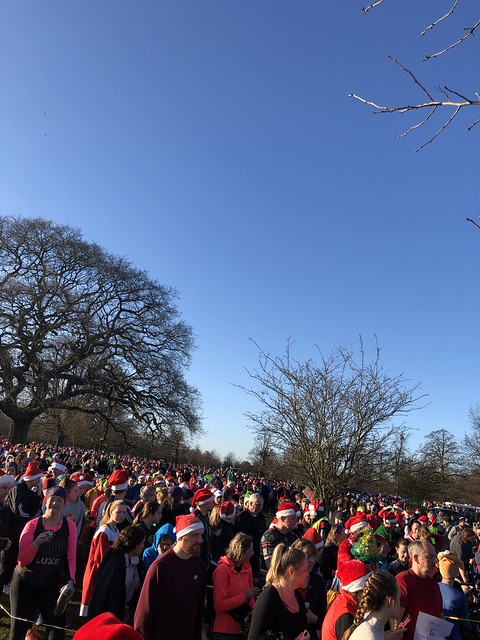 A short wait was required in the legendary and record-breaking triple funnel! 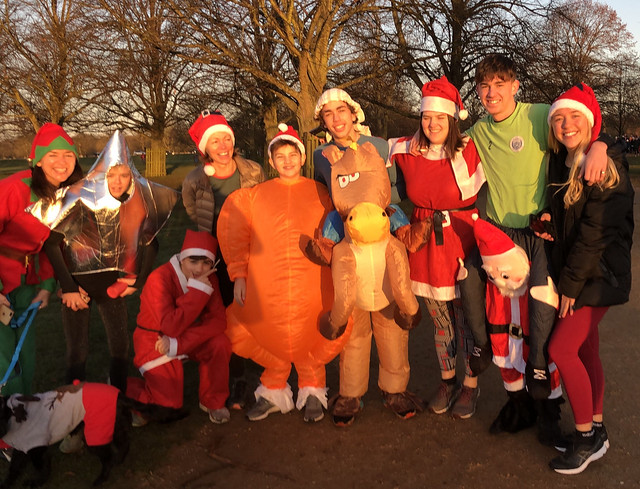 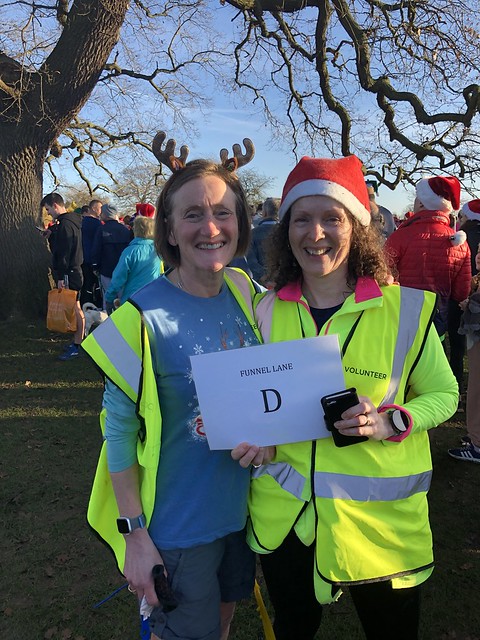 Susie and Fiona, photographer and run reporter respectively this week 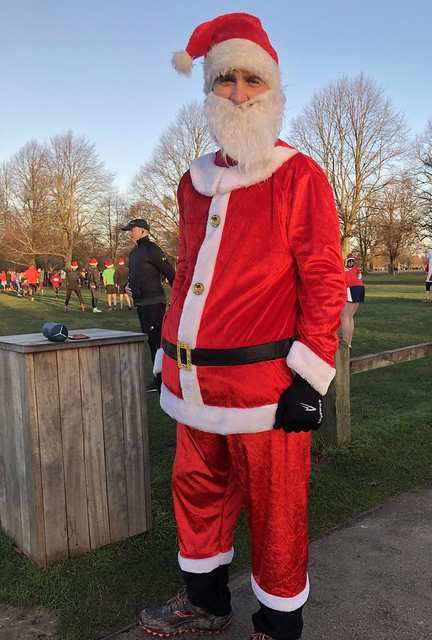 Other visitors (not pictured…)

Who else visits parkrun on Christmas Day? A technical glitch means we’ve lost the photos of these visitors from near and far, so for the record:

There were people visiting family, like Anita GODDARD, who came along with her son Jimmy; they usually run at Holkham parkrun. Then there are people who come from far away, like Lachlan BRAID, whose home parkrun is Studley in Melbourne. There are even people who don’t have a home parkrun, like Rupa, over from NYC to see her sister, who also came along to Bushy. Then there are people who never do the same parkrun twice – like Vitalij DANILOV from Moscow, who is also a member of the Russian wheelchair curling team. He was at Bushy with his equally globe-trotting friend Anton BATUGIN.

Most of us haven’t travelled far, though. Among hundreds of locals who replace the traditional Christmas morning walk with a parkrun, jog or walk, there are first timers like Janine and Martin COCKRAM who had toddled over from Epsom to do their first ever parkrun. They seemed to enjoy it, so not their last, we hope.

So, how many tokens will we need for Christmas Day 2020?