For the core team, the week between parkruns can be serene, with no problems or concerns. The volunteer coordinator has nearly all the work to do, reading emails and updating the roster, while the run director (or the person with the kit) checks the finish tokens, clears the scanners and stopwatches and charges everything, ready for Saturday.

However, this week we have had plenty of interaction with each other, checking the weather forecasts, liaising with the park, debating whether or not to cancel, being concerned about the relatively low numbers of volunteers, whether or not we’d be willing to ask people to stand out in the woods for over an hour in the wind and so on. Social media needed updating and emails were sent to the volunteers to remind everyone to keep checking in case we had to cancel.

So it was something of a relief to wake up on Saturday morning to see that the forecast had changed overnight and that Dennis was slower to arrive than anticipated. In the end all was fine – we all got the message that the park was closing at 12, and that still gave us time to complete our run, pack away, process results and have the usual coffee / tea / cake / toasties / teacakes.

As for the run itself, 391 people braved the elements and made it round the course. 45 were first timers at Cambridge and 12 of these were brand new to parkrun. We hope you enjoyed it and that you’ll be back for at least another run. At the other end of the scale four people are well over 400 runs each - think they like this parkrun lark. There were 33 shiny new PBs – well done. Chris Aylmer ran his 250th run, Edward Taylor his 100th, Mike Kemp his 50th and Francesca Day her 10th. Congratulations on reaching your milestones and looking forward to seeing you in your t-shirts soon! 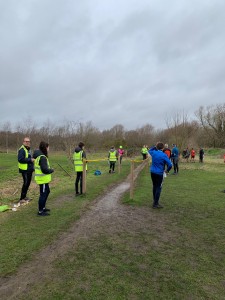